Our live coverage of Michael Cohen's sentencing has ended. Scroll through the posts below to see how it unfolded or follow CNN Politics for more.

Artist Christine Cornell was in the courtroom today for Michael Cohen's sentencing and created these sketches. (It's a federal courtroom, so no photography was permitted.)

So far, 36 people and entities have been charged in special counsel Robert Mueller's Russia investigation.

Of those, seven people pleaded guilty. They are....

And now, four of the seven sentenced to prison:

One person — Paul Manafort — was convicted at trial.

Read more about the numbers behind the Mueller investigation here.

Scannell, who was inside the courtroom, said Cohen teared up as he spoke to the judge about bringing pain and shame to his family. Sobbing could be heard in the courtroom when Cohen was finally sentenced to three years in prison.

"His family members were all very emotional. He was surrounded by friends and family. His daughter sitting right behind him, his wife, son, his mother, father, in-law, cousins, they all came over after the sentencing, which seemed like an absolute shock to them," Scannell said.

After the sentencing, Cohen and his family hugged and engaged in "long embraces," she reported. Handshakes were exchanged.

"Everyone looked very shocked and I think they were expecting him to have a much lighter sentence, if not any time at all," Scannell said.

Watch below for more:

Lanny Davis, Michael Cohen's former attorney, just issued a statement about Cohen's sentencing, saying that he "owned up to his mistakes and fully cooperated" with the special counsel's investigation.

Davis said he will no longer serve as Cohen's attorney since the sentencing is over.

Instead, he said he will serve as Cohen's communications adviser.

“Michael Cohen, former attorney to Donald Trump, continues to tell the truth about Donald Trump’s misconduct over the years.
At the appropriate time, after Mr. Mueller completes his investigation and issues his final report, I look forward to assisting Michael to state publicly all he knows about Mr. Trump — and that includes any appropriate Congressional committee interested in the search for truth and the difference between facts and lies. Mr. Trump’s repeated lies cannot contradict stubborn facts.
Michael has owned up to his mistakes and fully cooperated with Special Counsel Mueller in his investigation over possible Trump campaign collusion with Russian meddling in the 2016 election. While Mr. Mueller gave Michael significant credit for cooperation on the “core” issues, it is unfortunate that SDNY prosecutors did not do the same.  To me, their judgment showed a lack of appropriate proportionality.
Since the sentencing process has been completed, I no longer need to serve as an attorney for Michael, but will continue to serve as a communications advisor.” 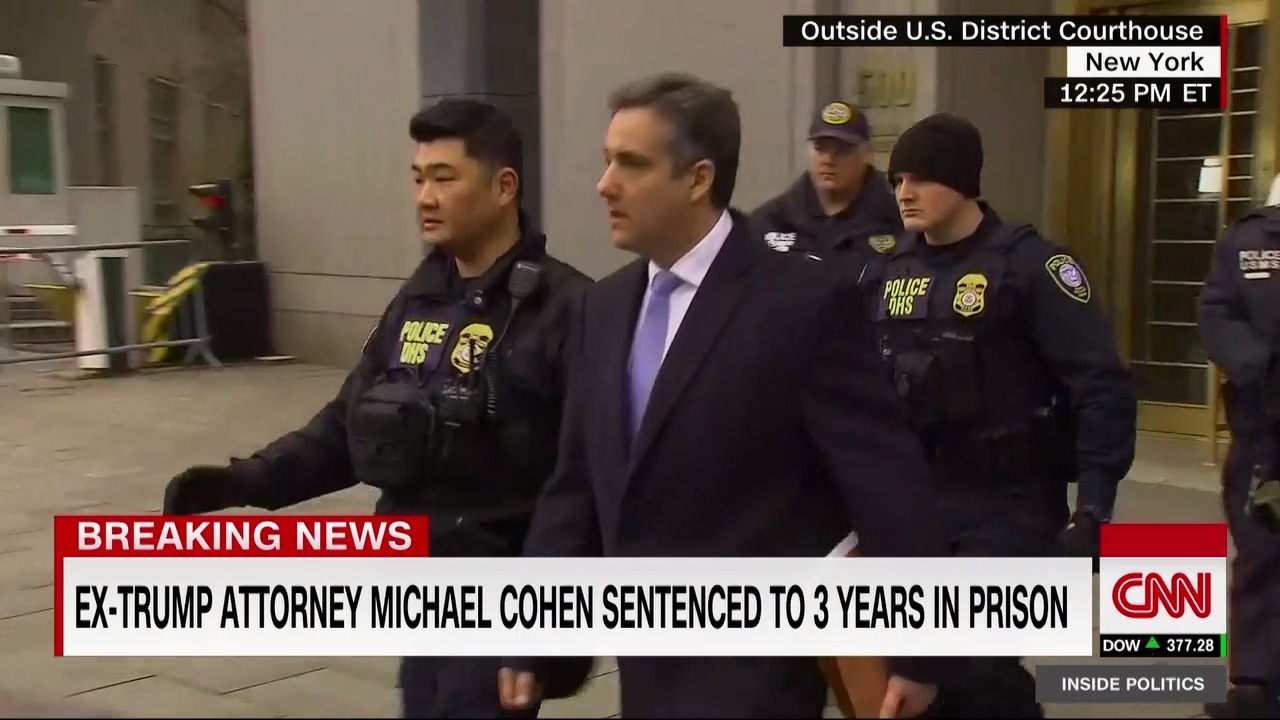 President Trump's former "fixer" Michael Cohen, who was just sentenced to three years in federal prison, emerged from the courtroom moments ago and said nothing to the scores of press assembled there.

His wife and children left moments before.

They squeezed into a waiting black SUV.

In addition to the three-year prison sentence, Judge William Pauley imposed more than $1 million in restitution for Michael Cohen.

Cohen is scheduled to surrender on March 6.

The sentencing of Michael Cohen has concluded.

Cohen has been ordered to surrender on March 6.

The judge agreed to recommend Otisville Federal Correctional Facility, in Upstate New York, as the prison where Cohen will spend his time. It's less than a two hour drive from Manhattan.

Cohen was sentenced for eight criminal counts he pleaded guilty to in August. The judge gave him an additional two months for the special counsel charge, to be served concurrently with the US attorney's New York office term.

He has been ordered to surrender on March 6.