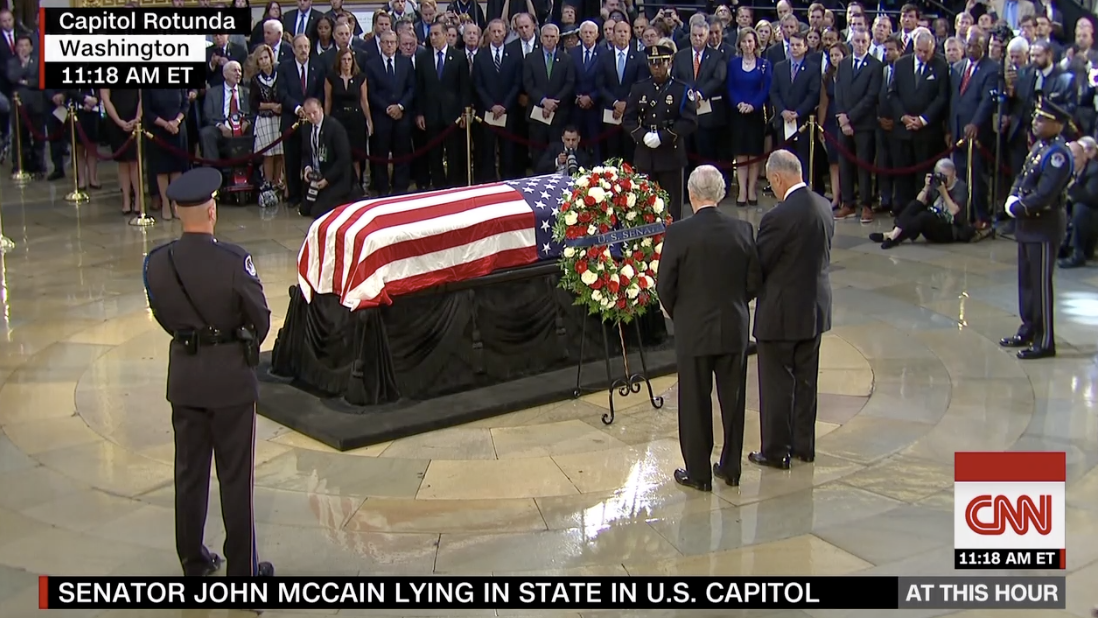 The Capitol Memorial program is all protocol, with the exception of Senate Minority Leader Chuck Schumer and Senate Majority Leader Mitch McConnell.

The two lawmakers participated in the wreath laying at Sen. John McCain's ceremony in the US Capitol.

McCain expressly wanted Schumer, a Democrat, so he and McConnell jointly laid the Senate wreath.

As we showed you earlier, a storm broke out at the very moment Sen. John McCain's casket was carried into the Capitol rotunda.

This is how that looked on radar. 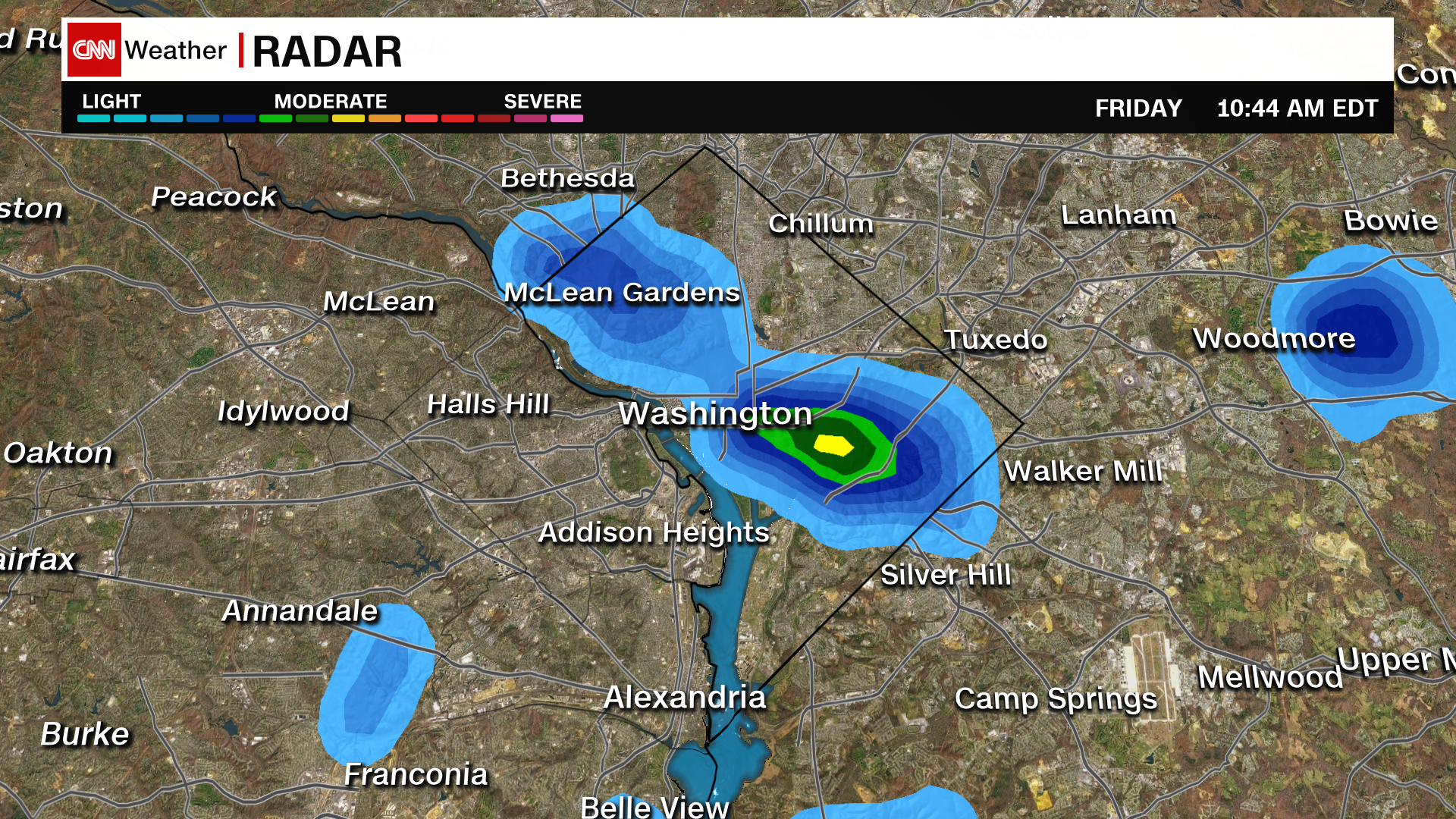 Vice President Mike Pence said the late Sen. John McCain fought for what he believed in, even though they didn't always see eye-to-eye on some key issues.

"For 35 years, John served in these very halls under this very dome. And he fought for what he believed in. In my years in congress and as vice president, we didn't always agree either. And he almost always noticed. But his support for limited government, for tax reform and support for our armed forces surely left our nation more prosperous and more secure. And he will be missed. As President Trump said yesterday, we respect his service to the country."

Pence then shared a message with the McCain's family. 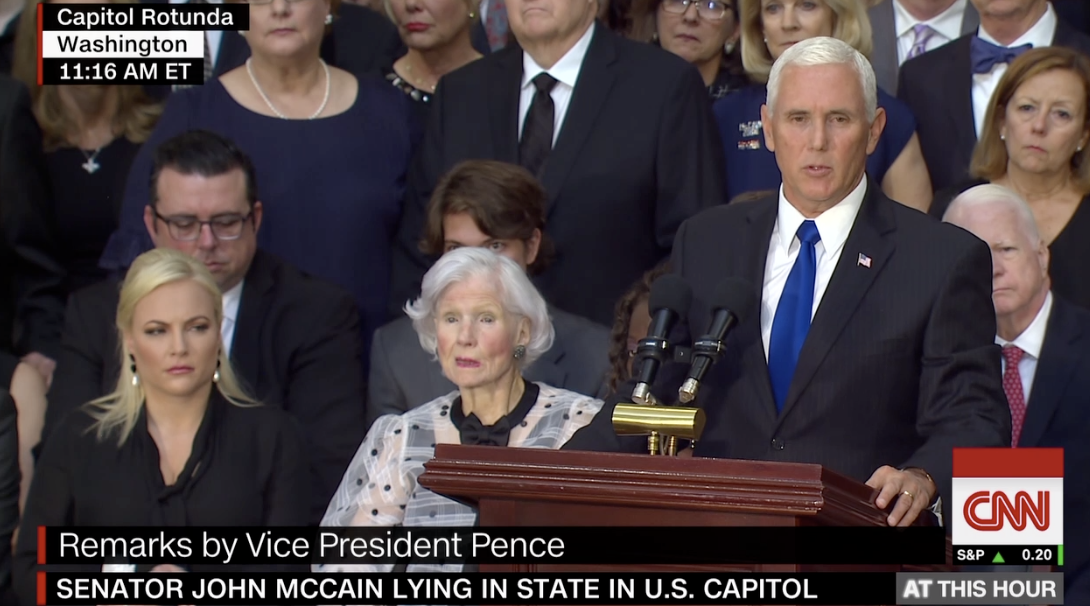 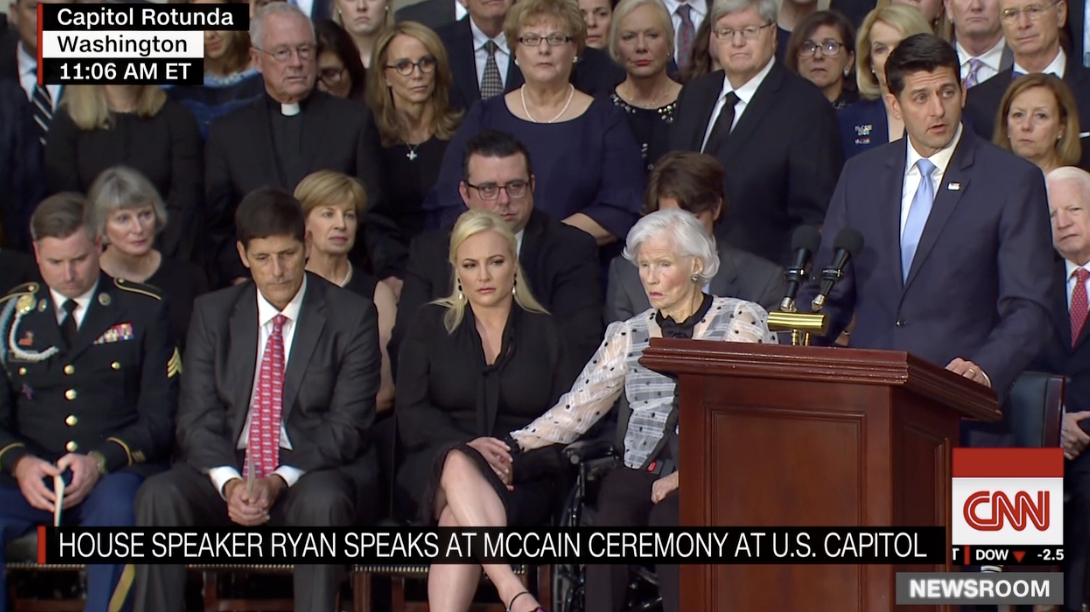 Speaker of the House Paul Ryan, speaking at a ceremony at the US Capitol, said he'll remember Sen. John McCain's fighting spirit and dedication to the country.

"What stands out about John McCain is what he stood for," Ryan said. "The rich blessings that only freedom can bestow. The sense of purpose that a battle joined can bring. The common humanity that burns in each of our hearts." 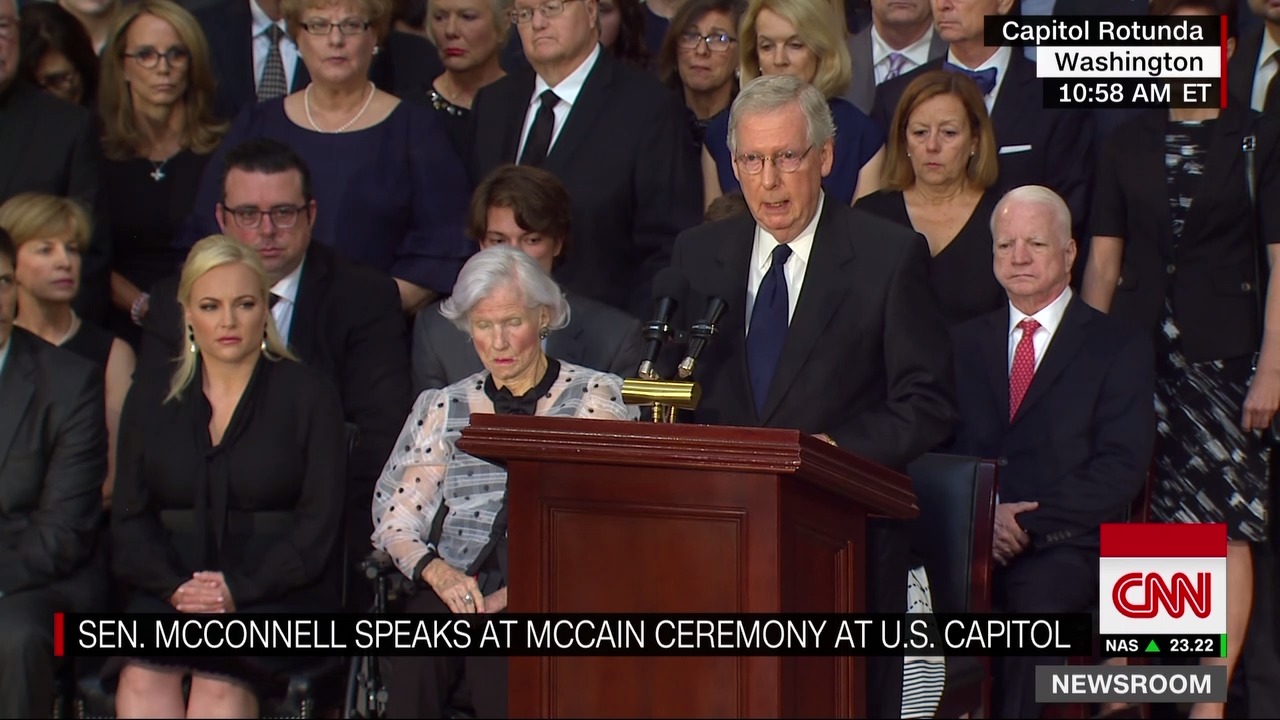 Senate Majority Leader Mitch McConnell, a man who at times fought on the opposite side of McCain on issues such as campaign finance, remembered him as a tough political opponent.

"He had America's fighting spirit," McConnell remembered. "I will miss a dear friend whose smile reminded us that service is a privilege."

Sen. John McCain's ceremony at the US Capitol has officially begun.

It is opening with a prayer which honors McCain's dedication to public service for placing himself directly in harm's way during the Vietnam War, and for "speaking the truth as he understood it, even when it was not politically expedient to do so." 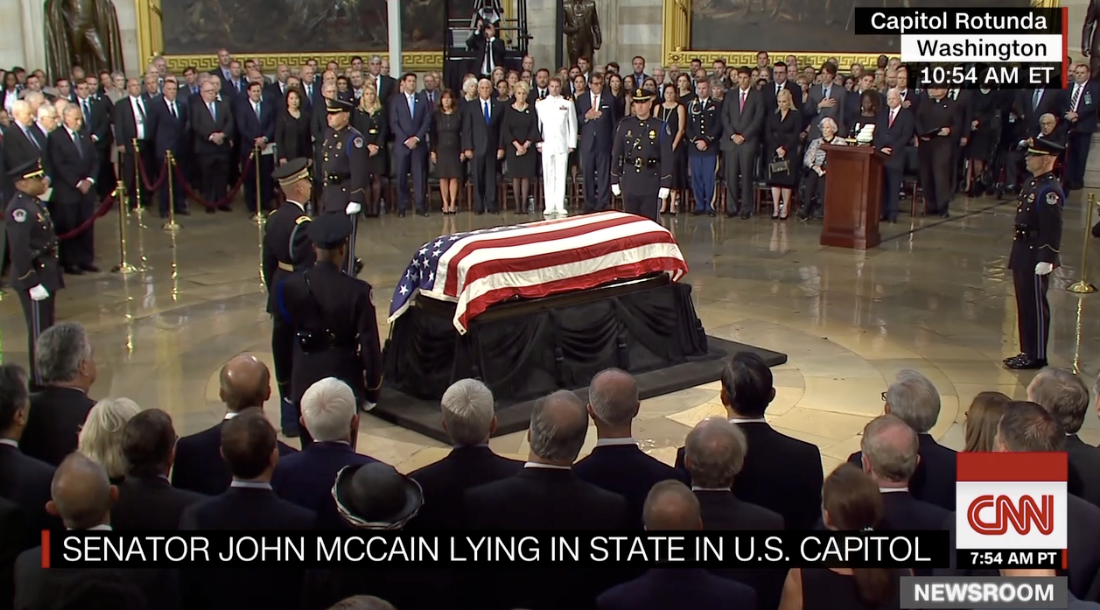 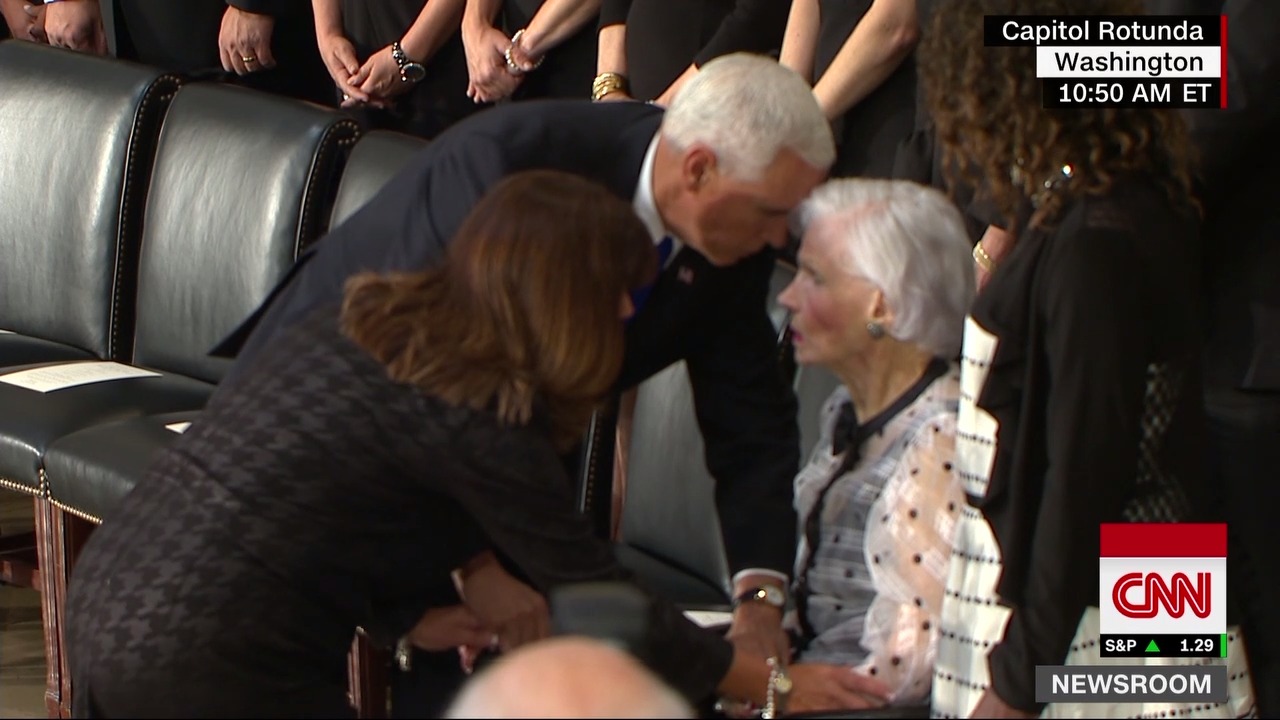 The final decision for her to attend the ceremony on Capitol Hill was made today.

A military guard carried the late Sen. John McCain's casket into the US Capitol this morning, as it rained in Washington, DC.

In a few moments: A ceremony will be held in the Rotunda at the Capitol, where McCain will lie in state.

Kellyanne Conway, special counselor to President Trump, was spotted on the second floor of the US Capitol Friday morning wearing a black dress.

Meanwhile, a crowd of former and current lawmakers have assembled outside the Senate Chamber as services for the late Sen. John McCain get underway.

Vice President Mike Pence is representing the administration at the Capitol Hill service and is expected to deliver remarks.