Sen. John McCain made clear he did not want President Trump to attend his funeral service.

Instead, he chose former Presidents George W. Bush, a Republican, and Barack Obama, a Democrat, to deliver eulogies for him.

It's a final fracture on the tense Trump-McCain relationship: Early in his presidential bid, Trump — who received five deferments to avoid military service in Vietnam — infamously maintained that McCain was not a war hero because he had been captured. He never apologized or walked-back his comments, despite the fact that McCain was imprisoned and tortured in Vietnam for more than five years.

During the time he remained active in the Senate, McCain expressed deep misgivings about Trump's job as President, criticizing his handling of world affairs and the example he has set for the country.

Watch more about McCain's decision not to invite Trump to his funeral:

John Goodie, a former Mesa High School security guard and football coach, arrived two hours early Wednesday carrying an American flag to remember the man who once sought him out in the most unexpected of encounters.

Goodie, who lives in Gilbert, Arizona, met Sen. John McCain in 1996 while working as a security guard at Mesa High School.

"He said I just want to thank you for your efforts on the Martin Luther King holiday," Goodie recalled, noting that he helped lead the drive to honor King in Arizona.

"Although we are on different sides of the political spectrum," McCain told him, "I just wanted you to know that I admire your tireless efforts in getting the Martin Luther King holiday for the City of Mesa and the state of Arizona," Goodie recalled.

In 1983, McCain voted against legislation to make King's birthday a federal holiday -- a position he would later regret. After a 2008 visit to the Lorraine Motel where King was killed, McCain pointedly apologized for his 1983 vote: "We can all be a little late sometimes in doing the right thing."

The Arizona senator, who apparently knew of Goodie's efforts from coverage of the Arizona MLK debate on television and the newspapers, talked to Goodie for a few minutes about his football career, then shook his hand and said "Keep up the good work."

Goodie, who explained that he went on later to be one of Barack Obama's delegates at the Democratic National Convention, said he was "blown away" by the encounter.

"He didn't hold back. When he made mistakes, he apologized -- like the Confederate flag and a number of other things. That takes a special individual. That's something I hope the history books will record. ... That's bravery. Even though in his politics, he turned against his President, he kept his head up all the way to the end."

Before he died, John McCain wrote a farewell statement to his fellow Americans. His spokesman Rick Davis read the note at the news conference in Phoenix on Monday.

He urged the nation's citizen to "not despair of our present difficulties" but instead asked Americans to "believe always in the promise and greatness of America."

We are citizens of the world’s greatest republic, a nation of ideals, not blood and soil. We are blessed and are a blessing to humanity when we uphold and advance those ideals at home and in the world," he wrote.

My fellow Americans, whom I have gratefully served for sixty years, and especially my fellow Arizonans,

Thank you for the privilege of serving you and for the rewarding life that service in uniform and in public office has allowed me to lead. I have tried to serve our country honorably. I have made mistakes, but I hope my love for America will be weighed favorably against them.

I have often observed that I am the luckiest person on earth. I feel that way even now as I prepare for the end of my life. I have loved my life, all of it. I have had experiences, adventures and friendships enough for ten satisfying lives, and I am so thankful. Like most people, I have regrets. But I would not trade a day of my life, in good or bad times, for the best day of anyone else’s.

I owe that satisfaction to the love of my family. No man ever had a more loving wife or children he was prouder of than I am of mine. And I owe it to America. To be connected to America’s causes – liberty, equal justice, respect for the dignity of all people – brings happiness more sublime than life’s fleeting pleasures. Our identities and sense of worth are not circumscribed but enlarged by serving good causes bigger than ourselves.

‘Fellow Americans’ – that association has meant more to me than any other. I lived and died a proud American. We are citizens of the world’s greatest republic, a nation of ideals, not blood and soil. We are blessed and are a blessing to humanity when we uphold and advance those ideals at home and in the world. We have helped liberate more people from tyranny and poverty than ever before in history. We have acquired great wealth and power in the process.

We weaken our greatness when we confuse our patriotism with tribal rivalries that have sown resentment and hatred and violence in all the corners of the globe. We weaken it when we hide behind walls, rather than tear them down, when we doubt the power of our ideals, rather than trust them to be the great force for change they have always been.

We are three-hundred-and-twenty-five million opinionated, vociferous individuals. We argue and compete and sometimes even vilify each other in our raucous public debates. But we have always had so much more in common with each other than in disagreement. If only we remember that and give each other the benefit of the presumption that we all love our country we will get through these challenging times. We will come through them stronger than before. We always do.

Ten years ago, I had the privilege to concede defeat in the election for president. I want to end my farewell to you with the heartfelt faith in Americans that I felt so powerfully that evening.

I feel it powerfully still.

Do not despair of our present difficulties but believe always in the promise and greatness of America, because nothing is inevitable here. Americans never quit. We never surrender. We never hide from history. We make history.

McCain died last Saturday at the age of 81. The Arizona Republican is lying in state at the Arizona Capitol.

Here are a few photos from the public visitation: 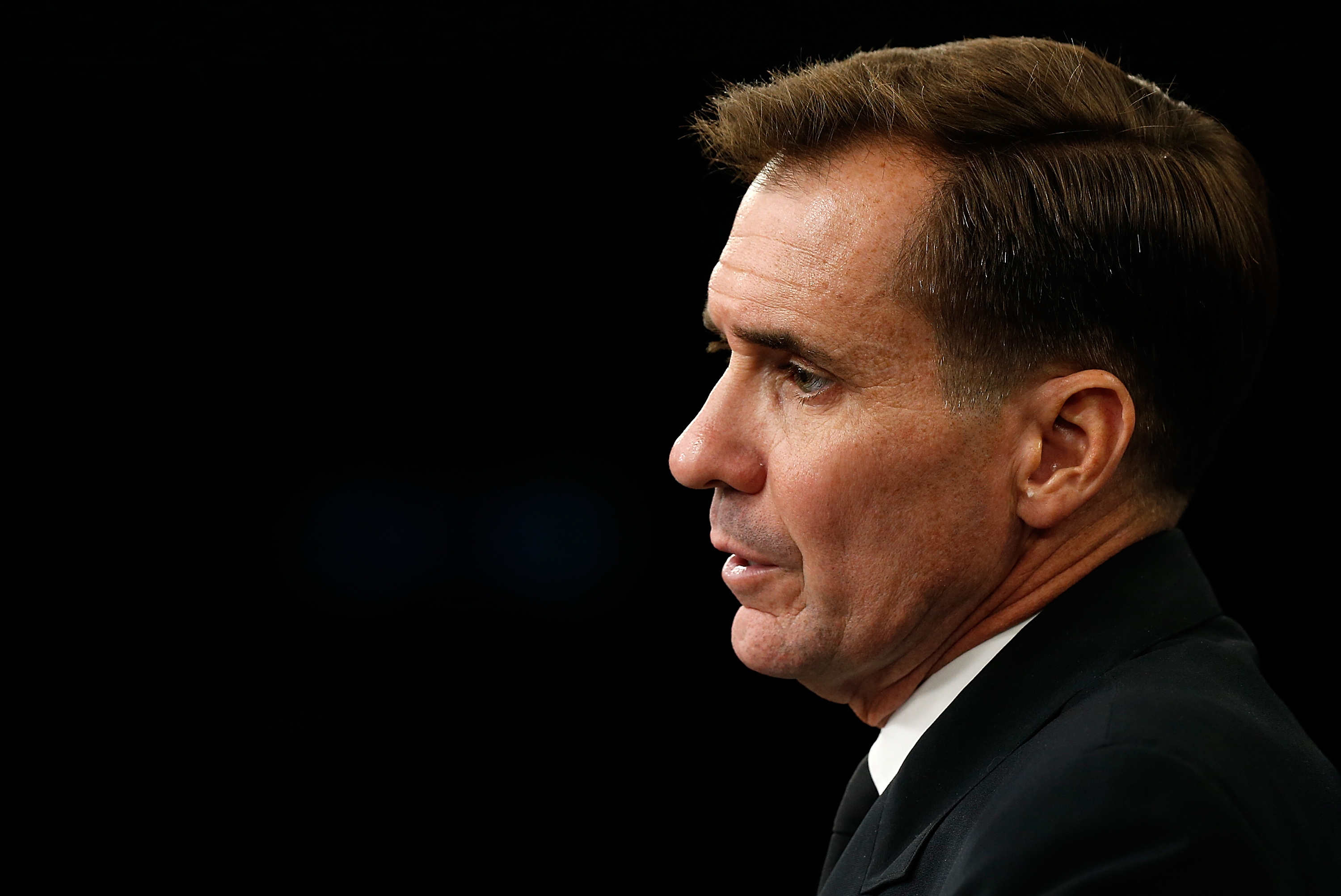 Retired Rear Adm. John Kirby shared a letter Wednesday that the late Sen. John McCain had written to his son as he was getting ready to be commissioned into the US Navy.

Kirby, a former spokesperson for the State Department and current CNN analyst, said he had asked for McCain to offer some advice to his son that "he could hold on to as he goes out to lead sailors."

In the letter, McCain, a formal naval aviator who was held as a prisoner of war during Vietnam, wrote that "God blessed me with the company heroes and it was all the difference in my life."

"Be proud of your accomplishments and never stop believing in yourself. And most importantly, you will find the most happiness in serving a cause greater than your own self-interests," McCain wrote.

Kirby told CNN's Wolf Blitzer that "nothing that I could have said to my son as a dad could be better than what Sen. McCain said to my son." 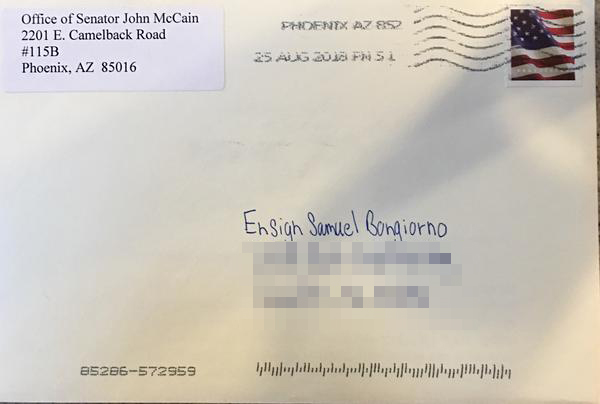 When Navy ensign Sam Bongiorno opened his mailbox on Monday, he found an envelope he never expected to see: a letter from the late Sen. John McCain.

McCain had written to congratulate him on his recent graduation from the Merchant Marine Academy. The letter, written on Aug. 20, was mailed on Aug. 25 from McCain's Phoenix office.

"I graduated in June, but never expected to hear from him or his office due to his declining health," he told CNN.

McCain — a Naval Academy graduate himself — frequently sent letters to new graduates of the service academies and young service members around the country. 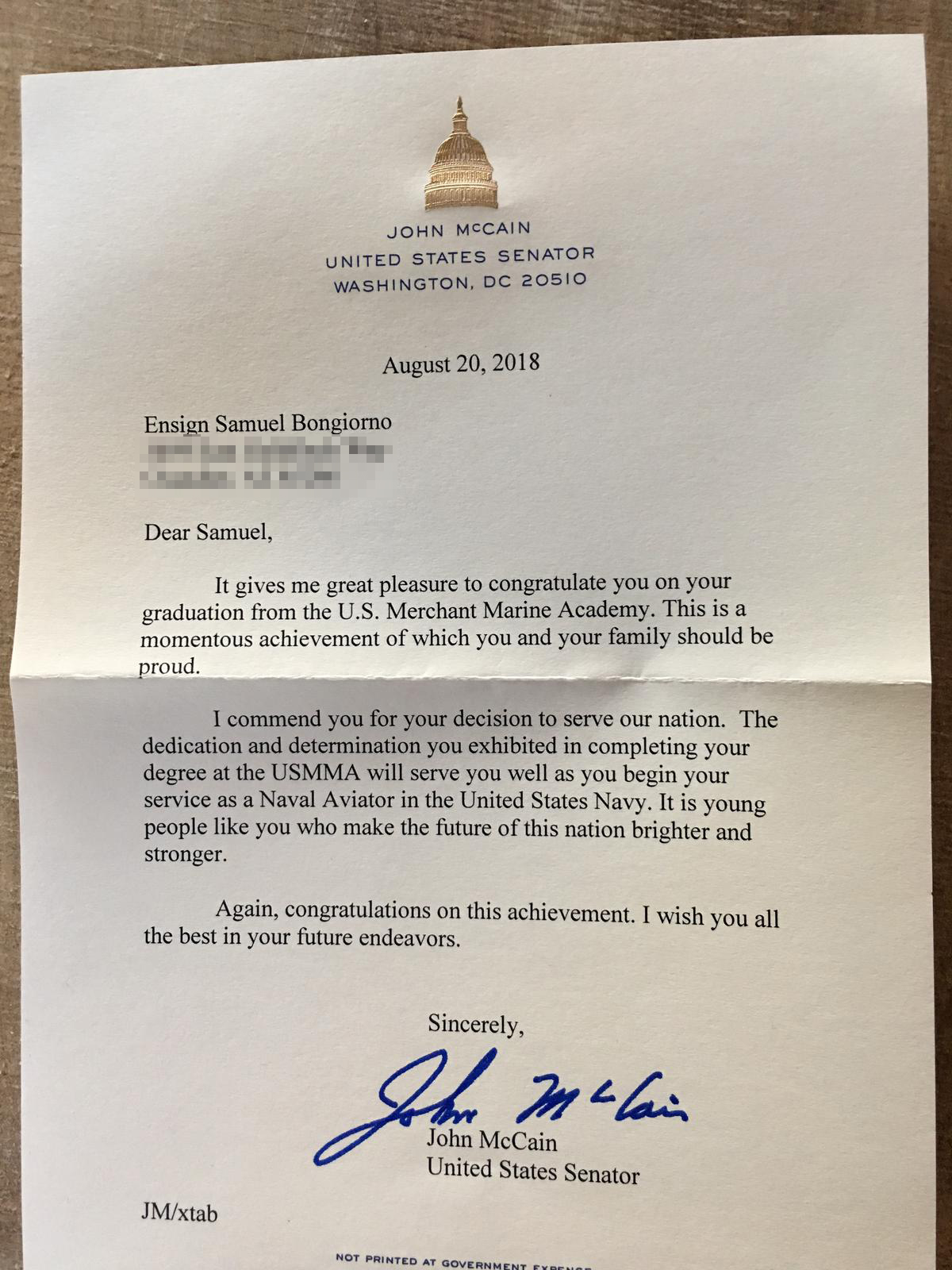 Alexander Hurtado arrived early Wednesday to get a spot at the front of the line to visit Sen. John McCain's casket at the Arizona State Capitol.

"It’s a sad and unfortunate event having to stand here," he said.

Hurtado continued: "Yet it remains a moment that many people are proud to do; to respect a great man like John McCain. He represented the people with no account to party affiliations. More importantly, we the people. Our founding fathers would be proud to call him an American."

He posted this photo from outside the Capitol:

Our photo team is collecting the most moving photos from the McCain memorials. Here are a few from the ceremony at the Arizona State Capitol earlier today.

Sen. John McCain is lying in state at the Arizona Capitol. His body arrived just before 1 p.m. ET.

Sen. Jeff Flake and Arizona Gov. Doug Ducey spoke at a private ceremony at the Capitol's rotunda. Now, members of the public are invited to pay their final respects to the late senator.

This is a rare honor. In the last 40 years, only two others have lain in state in that building: Arizona state Sen. Marilyn Jarrett in 2006, and Olympic gold medalist Jesse Owens, who was a resident of Tucson, in 1980.