Sen. Joe Lieberman, a Democrat-turned-Independent, said that in 2008 John McCain "had a far out idea of asking a Democrat to be his running mate"///:/// him.

Lieberman said: "When he first talked to me about it, I said, 'You know, John, I'm really honored, but I don't see how you can do it. Even though I won my last election as an independent, I'm still a registered Democrat.'" McCain's was "direct and really ennobling," Lieberman said.

"That's the point, Joe," McCain told him. "You're a Democrat, I'm a Republican. We could give our country the bipartisan leadership it needs for a change."

Ultimately, McCain chose Sarah Palin, and the rest is history.

The prospect of a Lieberman VP pick raised concerns among conservatives, CNN reported at the time.

Lieberman, an independent senator who was the 2000 Democratic vice presidential nominee, had been a vocal supporter of the war in Iraq, but he backed abortion rights.

Conservative activists feared at the time that if McCain picked him, it could drive away social conservatives who were already uneasy about his nomination. 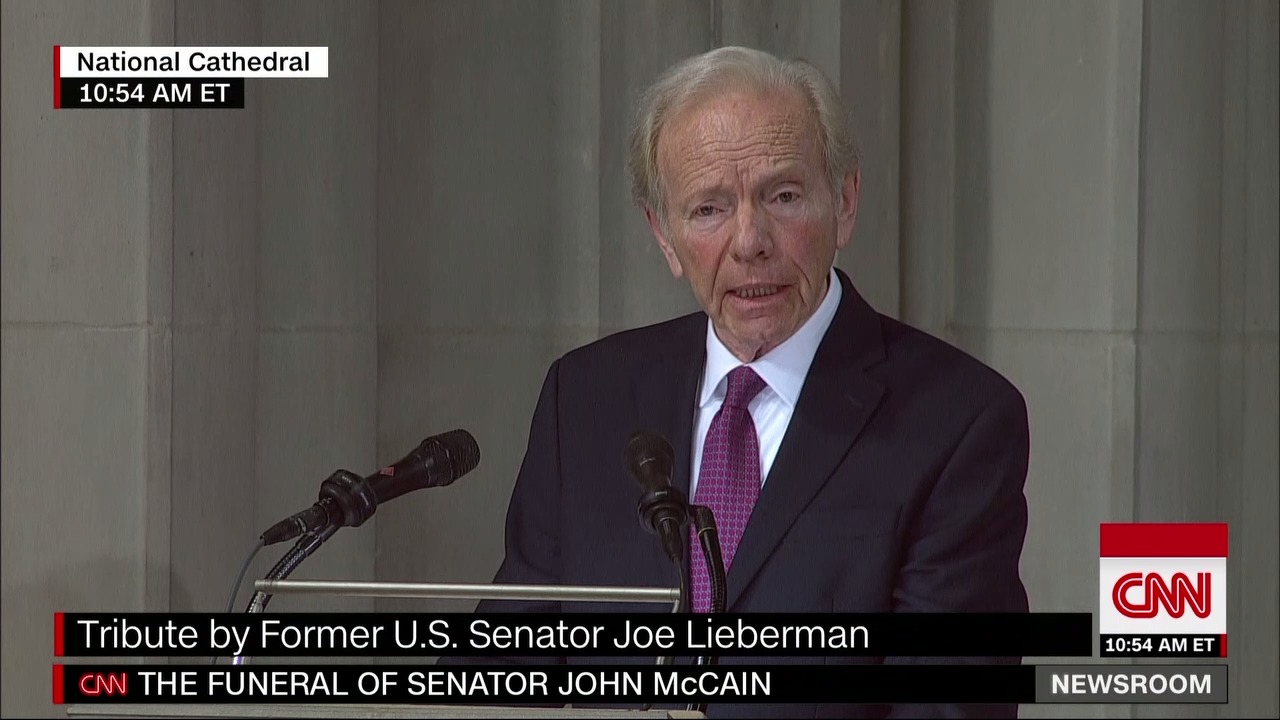 Sen. Joe Lieberman, John McCain's longtime friend who was nearly a former running mate, said speaking today was one of the greatest honors of his life.

He spoke of hearing McCain tell people that there was a "special satisfaction that comes from serving a cause greater than yourself," and that it was a creed he lived by.

"The greater cause to which he devoted his life was America, not so much the country defined by its borders, but the America of our founding values, freedom, human rights, opportunity, democracy, and equal justice under law," Lieberman said.

"In John's life, he nobly served and advanced these American values, and remarkably his death seems to have reminded the American people that these values are what make us a great nation," he added. "Not the tribal partisanship, personal attack politics that have recently characterized our life."

The week of memorials celebrating McCain's life, Lieberman said, has lifted the country "above all that." 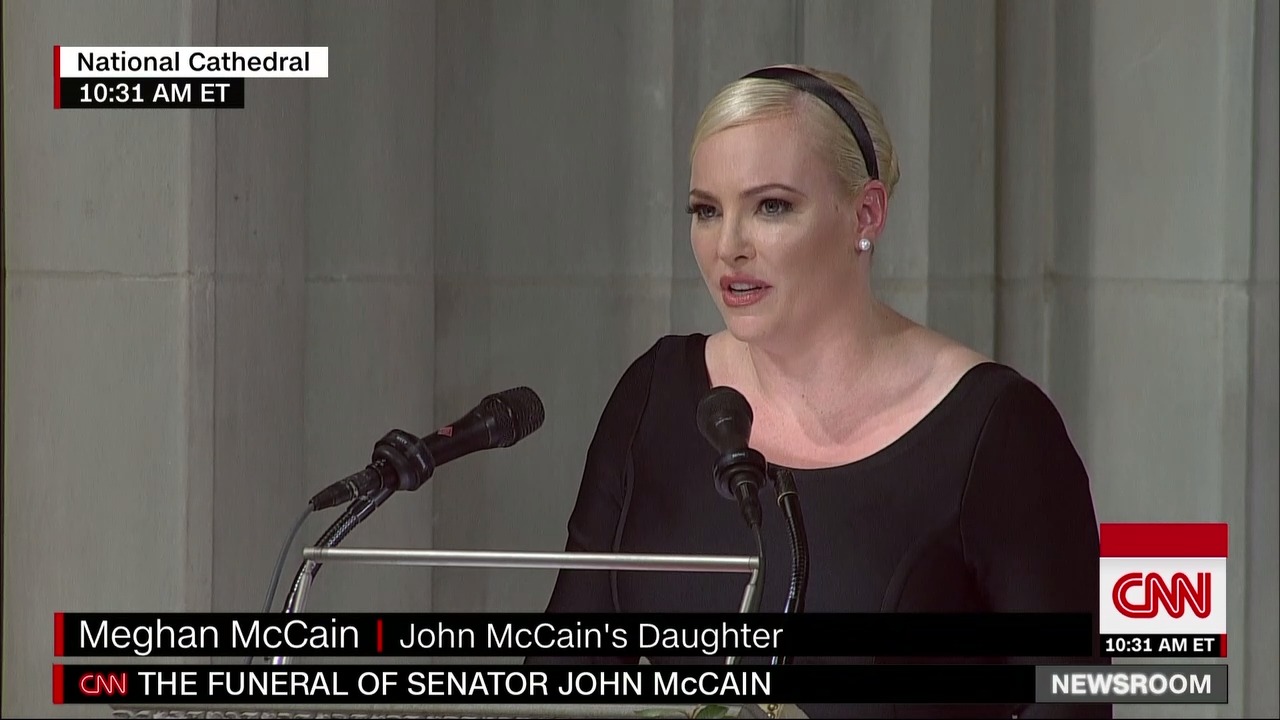 Meghan McCain, speaking at her father's memorial ceremony in Washington, D.C.'s National Cathedral, gave a forceful rebuke to the rhetoric coming out of the White House just a few miles away, defining the America of John McCain as one that is generous and welcoming, modest yet strong -- and already great.

The bipartisan crowd of dignitaries applauded. 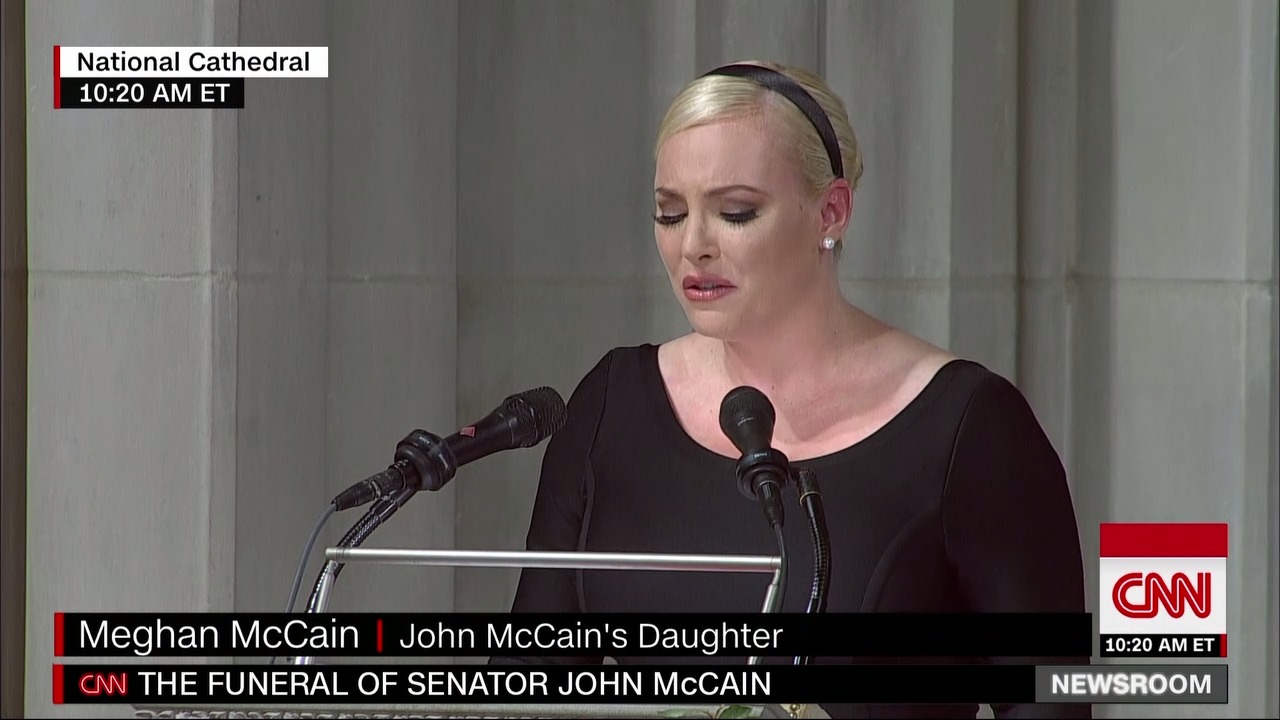 Meghan McCain, speaking through tears at her father's memorial service at Washington, D.C.'s National Cathedral, said that the family, friends, as well as current and former leaders were gathered there to "mourn the passing of American greatness, the real thing, not cheap rhetoric from men who will never come near the sacrifice, those that live lives of comfort and privilege while he suffered and served."

"He was a great fire who burned bright," McCain continued, adding that she and her family had heard from many in the past several days who "stood in the warmth and light of his fire and found it illuminated what's best about them."

And to his critics: "A few have resented that fire, for the light it cast upon them for the truth it revealed about their character. But my father never cared what they thought, and even that small number still have the opportunity as long as they draw breath to live up to the example of John McCain." 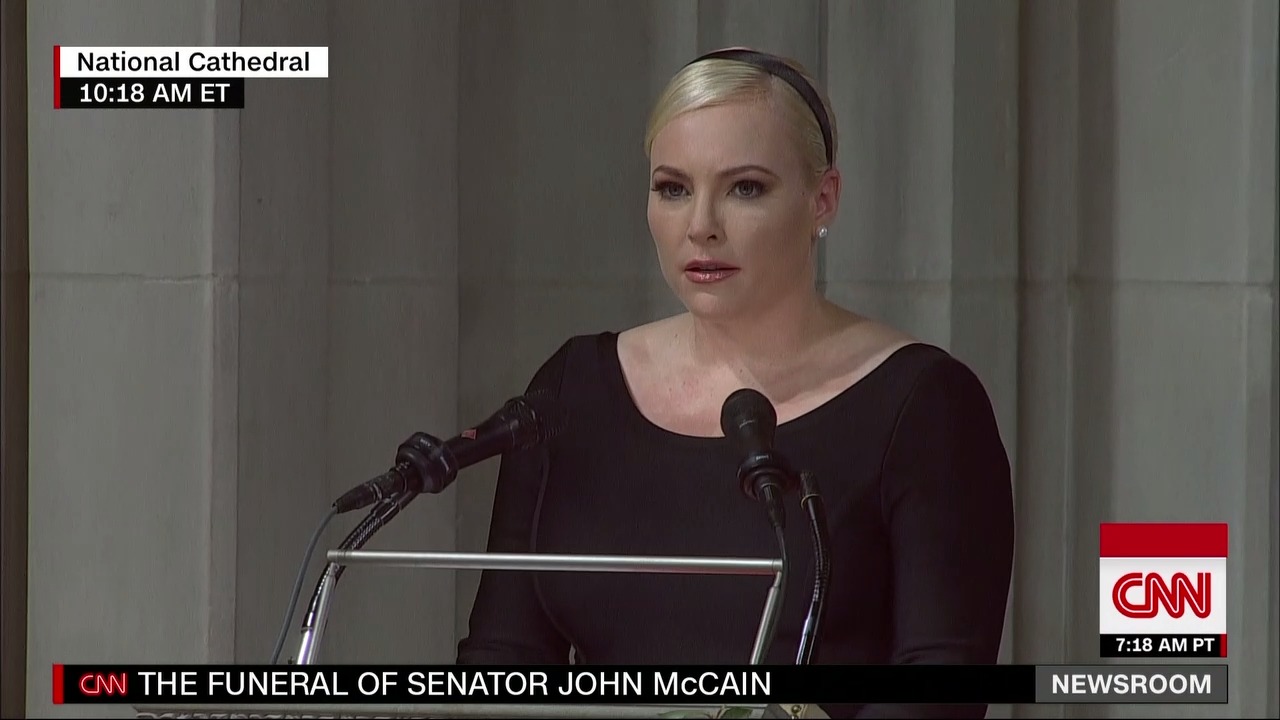 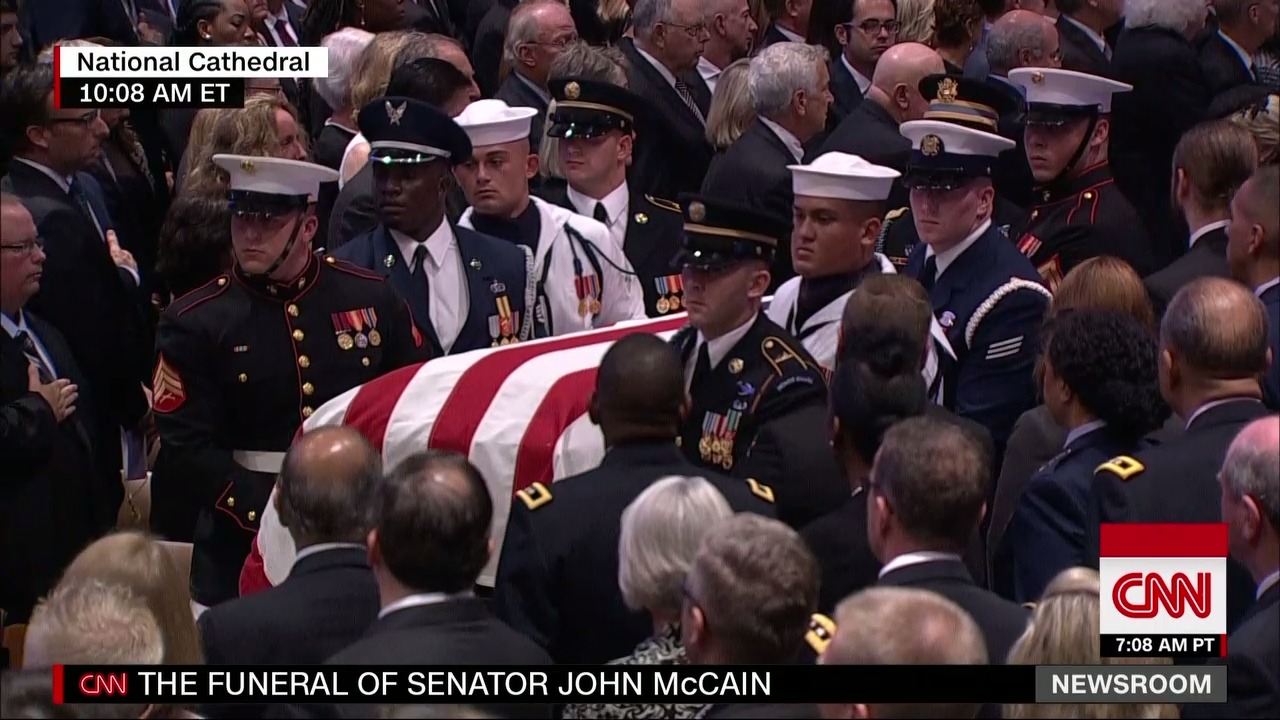 Friends, family and former presidents gathered this morning at Washington National Cathedral to honor the life of the late Sen. John McCain. The ceremony is beginning now.

Here are the moments to expect:

The three former presidents Barack Obama, George W. Bush and Bill Clinton, joined by former first ladies Michelle Obama, Laura Bush and Hillary Clinton (a former senator, secretary of state, and Democratic nominee for president herself), are sitting in the first pew as the ceremony begins.

Former vice presidents Al Gore and Dick Cheney are there, too.

Bush and Obama will give remarks. 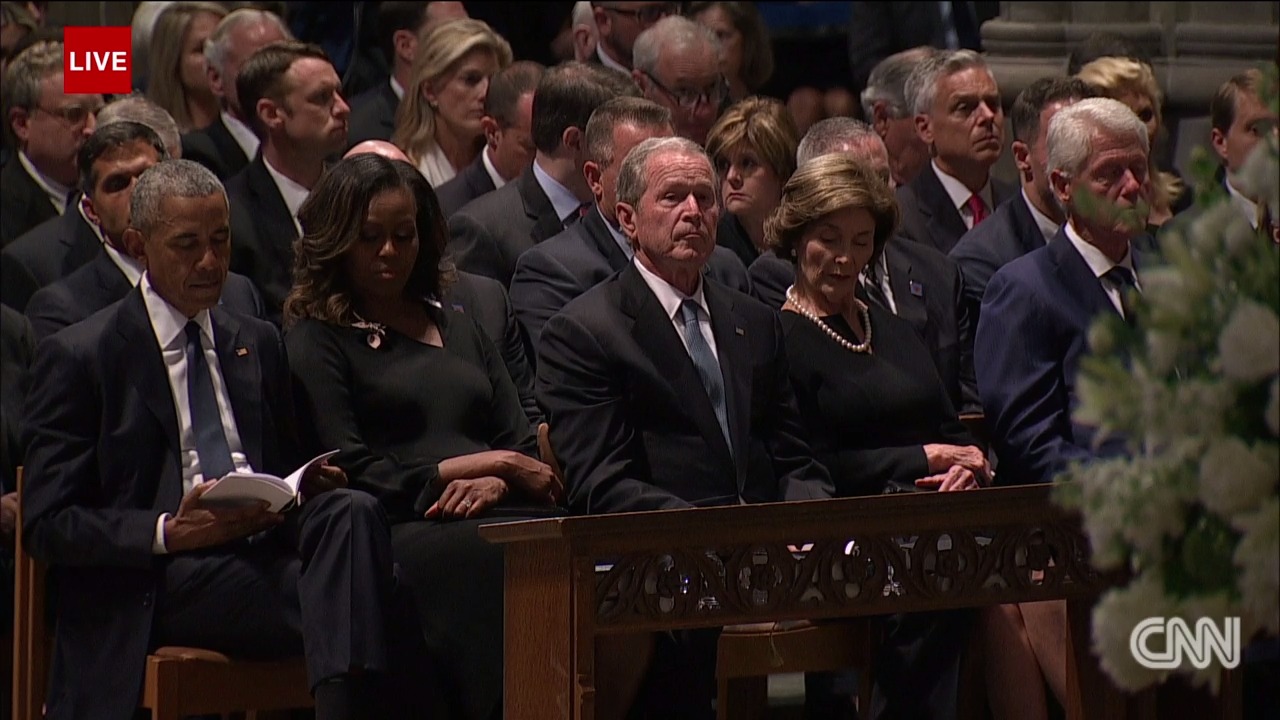 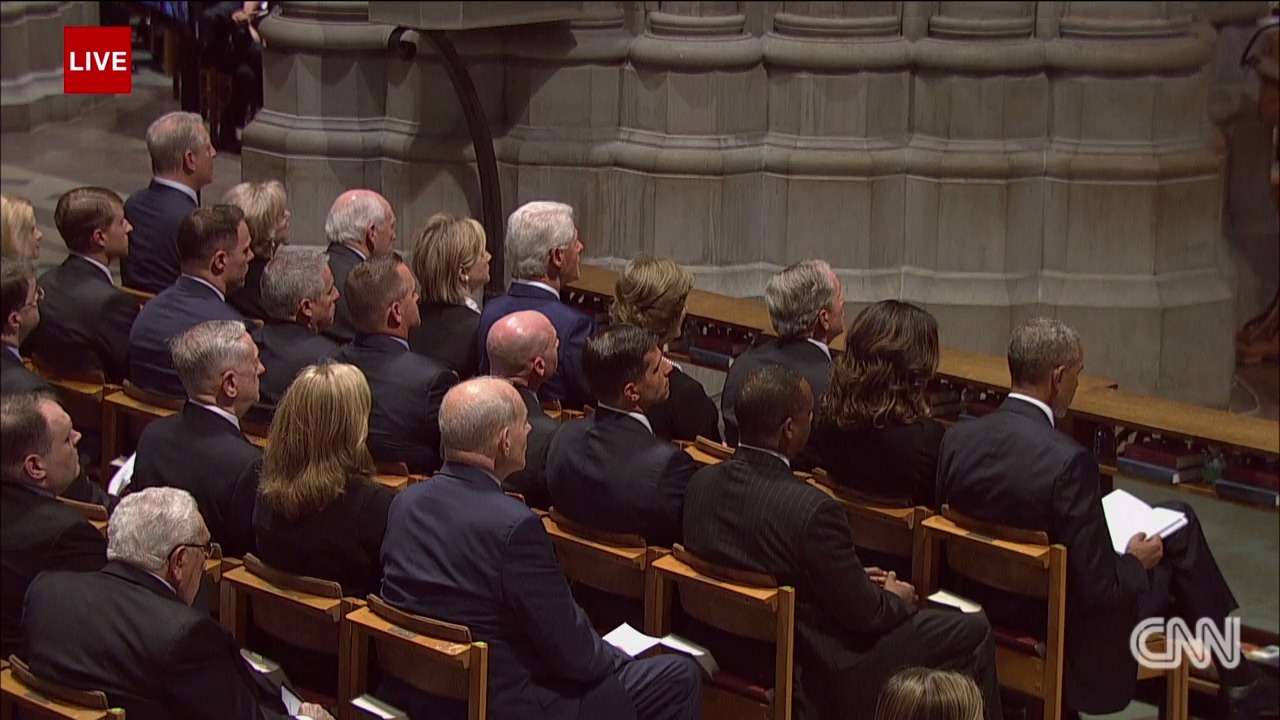 Sen. John McCain arrived at National Cathedral this morning just before 9:45 a.m. ET, and his casket was removed from the hearse and walked up the steps by honor guard members as his family solemnly looked on. Their hands were over their hearts. 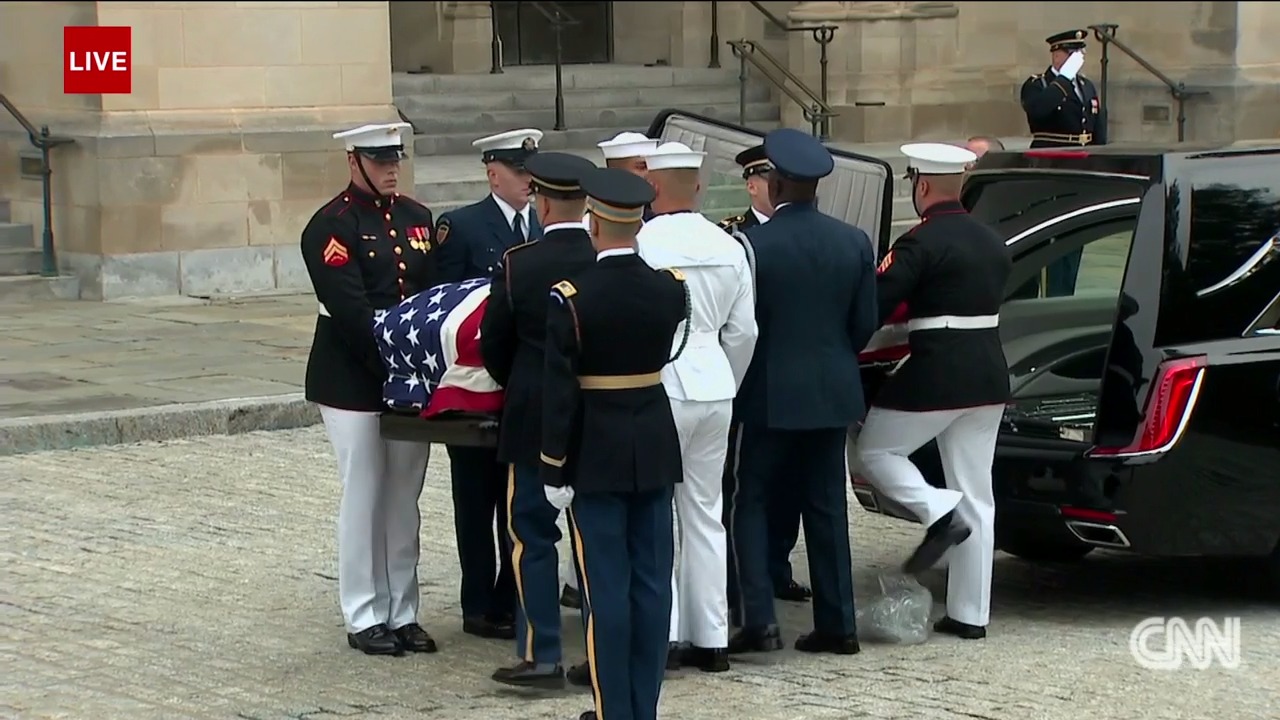 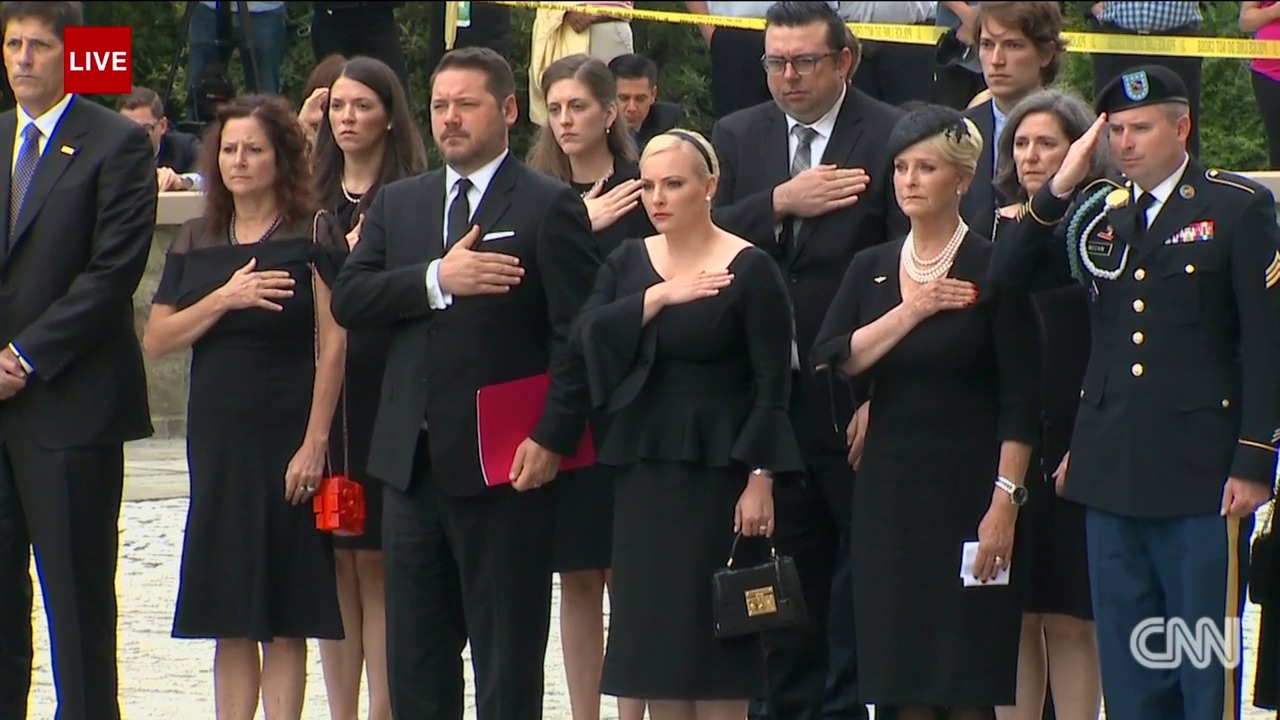 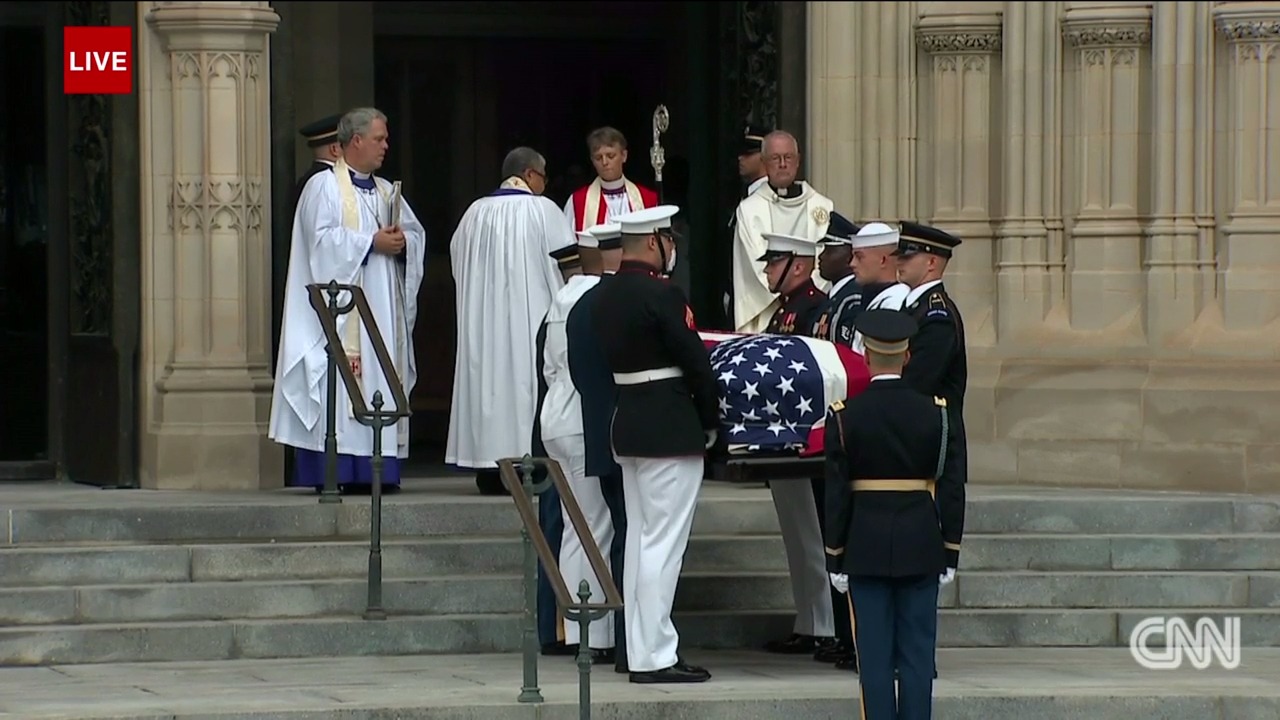 Sen. John McCain's staff provided the following list of notable attendees expected to attend this morning's service. It includes a number of current and former US leaders, current and foreign leaders, and at least seven POWs: