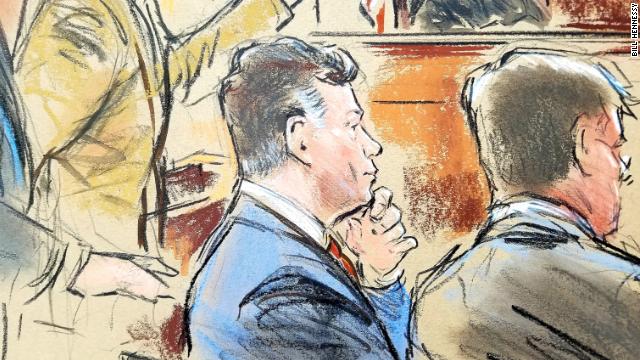 Maximilliam Katzman told the jury Wednesday that Paul Manafort was the only client of high-end men's boutique Alan Couture to pay with international wire transfers.

Katzman confirmed documents that show incoming international wire transfers from Manafort's companies for thousands of dollars worth of clothing. The clothing was custom made for Manafort.

In one email, Manafort wrote to the clothing boutique, "You will be receiving an email for the amount due from Leviathan," his foreign shell company.

During his testimony, Katzman, who was manager at his father's store Alan Couture, described several invoices for Manafort:

After he said Manafort was an important client, Judge T.S. Ellis asked Katzman if all of Alan Couture's clients were important. "I don't want to answer that," Katzman said, to much laughter in the courtroom.

Ronald Wall, the longtime chief financial officer of another exclusive men's clothing boutique, House of Bijan, is now on the stand.

Judge T.S. Ellis said the jury may bring in a birthday cake on Friday to celebrate a birthday.

"I stopped having those," Ellis said with a smile about birthdays. "My wife is younger and I'm waiting for her to catch up."

It was a brief moment of levity from the judge who has attempted to hurry the presentation of evidence along and treated the prosecutors sternly during their questioning of witnesses.

The 16 jurors met each other yesterday, and have appeared to follow the evidence presented and Ellis' interjections closely during the first five rounds of witness testimony.

The Paul Manafort trial has reconvened this afternoon with testimony about Manafort's vast spending on luxury suits.

He testified that the store, Alan Couture, has only about 40 regular clients and Manafort was one of their top five buyers. Manafort primarily bought suits, sportscoats and outerwear, Katzman said.

Katzman's brown hair was slicked back and he wore a crisp navy suit, pocket square and striped tie.

Prosecutors have made a point to highlight Manafort's wealthy lifestyle, which they say was funded through illicit means. This strategy earned an early rebuke from the judge, who told them yesterday that it wasn't a crime to be rich.

The Manafort trial has taken a midday break. Court will be back in session at 1:30 p.m. ET.

What to expect after the break: Prosecutors said three or more witnesses will be called this afternoon. 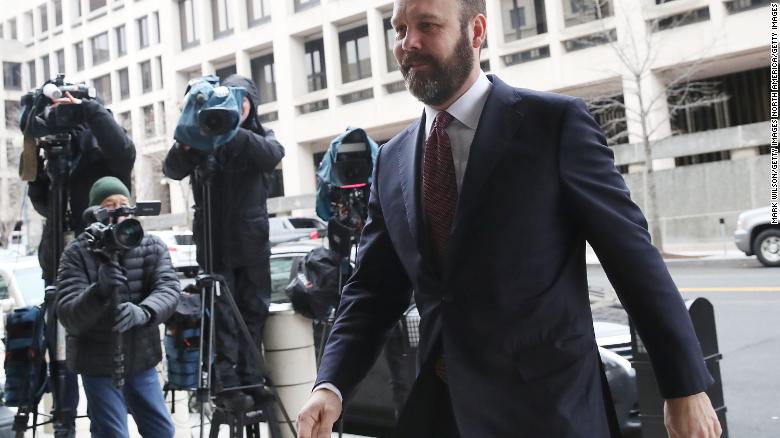 Prosecutors opened the door to the possibility that Rick Gates may not testify at Paul Manafort's trial, prosecutors said on Wednesday, after two days of the defense team attacking the supposed "star witness."

"He may testify in this case, he may not," prosecutor Uzo Asonye said in court with the jury present Wednesday.

Asonye added his team is always reevaluating whether to call a witness or not, depending on how the case is going and timing. He then quickly backtracked on his statement -- adding that he didn't mean to suggest Gates wouldn't testify.

Gates is on the witness list and played a central role in both sides' summaries of their cases, which they presented Tuesday afternoon. Prosecutors have said they have a broad swath of people planned on their witness list, not just Gates.

Judge T.S. Ellis has tried to hurry prosecutors along all day as prosecutors used an FBI agent to walk the jury through documents found in Manafort's home. Ellis has repeatedly reminded the prosecution they should bring witnesses to testify who have first-hand knowledge of Manafort's spending.

Ellis said, "If you're to call Mr. Gates, this is a waste of time," referring to FBI agent Matthew Mikuska's testimony about a memo titled "Gates agenda" that appeared to be a strategy memo from 2013.

And then this happened: During the back-and-forth about whether Gates will testify, Ellis noted the flurry of journalists who left the courtroom, saying that they "scurried out of here like rats out of a sinking ship."

If photos of Paul Manafort's lavish spending habits are the emotional center of prosecutors' case, the jury isn't yet seeing it.

Mr. Manafort is not on trial for having a lavish lifestyle," Judge T.S. Ellis said to prosecutor Uzo Asonye with the jury out of the room.

The jury has not yet seen today photos of the luxury clothing, watch and other items that Manafort allegedly bought with hidden Ukrainian consulting money because Ellis keeps stopping prosecutors from putting the photos they have on screens in the courtroom.

Day two of Manafort's criminal trial so far has been a dance between prosecutors and the defense team and judge over what evidence they may use to prove Manafort spent his allegedly untaxed income on personal purchases. Ellis in particular has asserted his control over the prosecutors' case. (The judge previously expressed his distaste for the Special Counsel Office's approach to the case at a court hearing before the jury trial convened.)

So what has the jury seen? Ellis has let the prosecutors show written documents like ledgers, receipts, invoices to the jury with Manafort's name on them.

Trump posed a question to his Twitter followers on Wednesday: Who was treated worse, "legendary mob boss, killer and 'Public Enemy Number One'" Al Capone or "political operative" Paul Manafort?

The President made a similar comparison in his July 17 interview with Fox News' Sean Hannity.

"Paul Manafort, who clearly is a nice man. You look at what is going on with him. It's like Al Capone. It's just a sad thing," he said last month.

Matthew Mikuska, an FBI agent who searched Manafort's Alexandria, Virginia, apartment for business documents and other evidence last July, told the jury that Manafort's name was on several documents showing millions of dollars in loan agreements and wire transfer invoices.

Why this matters: This is the first moment in the trial when prosecutors have gotten to the meat of their argument — that Manafort knowingly signed several kinds of false financial documents.

Mikuska, questioned by prosecutor Greg Andres, has shown the jury several of the documents found in the search of Manafort's apartment. Here's what some of them are: 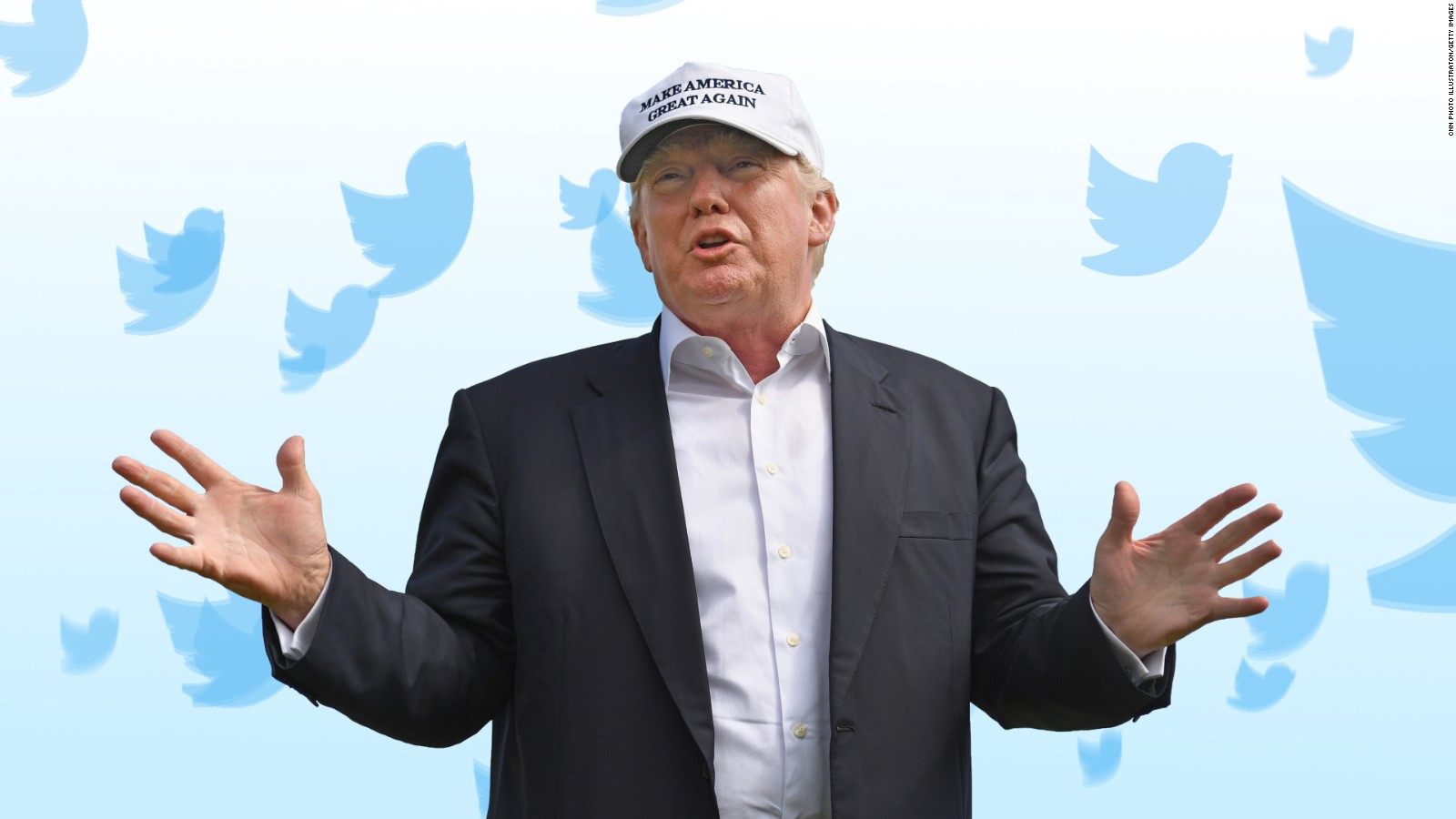 A central focus of Mueller's investigation is whether Trump has obstructed justice in the Russia investigation, and Wednesday's tweet could be scrutinized by the special counsel's team.

Citing three people briefed on the matter, The New York Times reported last month that Mueller is reviewing Trump's tweets as well as "negative statements" made by the President related to the attorney general and former FBI director James Comey, whom Trump abruptly fired last year.

"The President of the United States just called on his Attorney General to put an end to an investigation in which the President, his family and campaign may be implicated. This is an attempt to obstruct justice hiding in plain sight. America must never accept it."