President Trump has canceled next week's trip to Davos, Switzerland, for the entire US delegation due to the shutdown, White House press secretary Sarah Sanders announced Thursday.

The delegation was headed to the World Economic Forum in Davos, which is Jan. 22 to 25.

Here's what Sanders said in a statement:

“Out of consideration for the 800,000 great American workers not receiving pay and to ensure his team can assist as needed, President Trump has canceled his Delegation’s trip to the World Economic Forum in Davos, Switzerland.”

Trump canceled his appearance at the forum last week because of the ongoing government shutdown. Instead, Treasury secretary Steven Mnuchin was expected to lead the delegation.

Sen. Lisa Murkowski, a Republican from Alaska, said she is “glum” over the state of affairs with the shutdown.

Asked about her mood during the shutdown, she said, “Glum…. I’ve been discouraged."

"Many of the efforts that a good coalition of the willing have been trying to get advanced, seem to be pulled back by those that don’t want us to get out of the mess that we’re in. And I have a difficult time understanding that," Murkowski added.

Murkowski said the tit-for-tat between President Trump and House Speaker Nancy Pelosi is “wearing on me as a lawmaker."

She went on to say that she doesn't think any lawmaker should be leaving DC during the shutdown.

Murkowski's scheduled trips to London and Norway were canceled five days ago, she said, because they couldn’t get support for the State Department due to the shutdown. It was not canceled by the administration, she said. 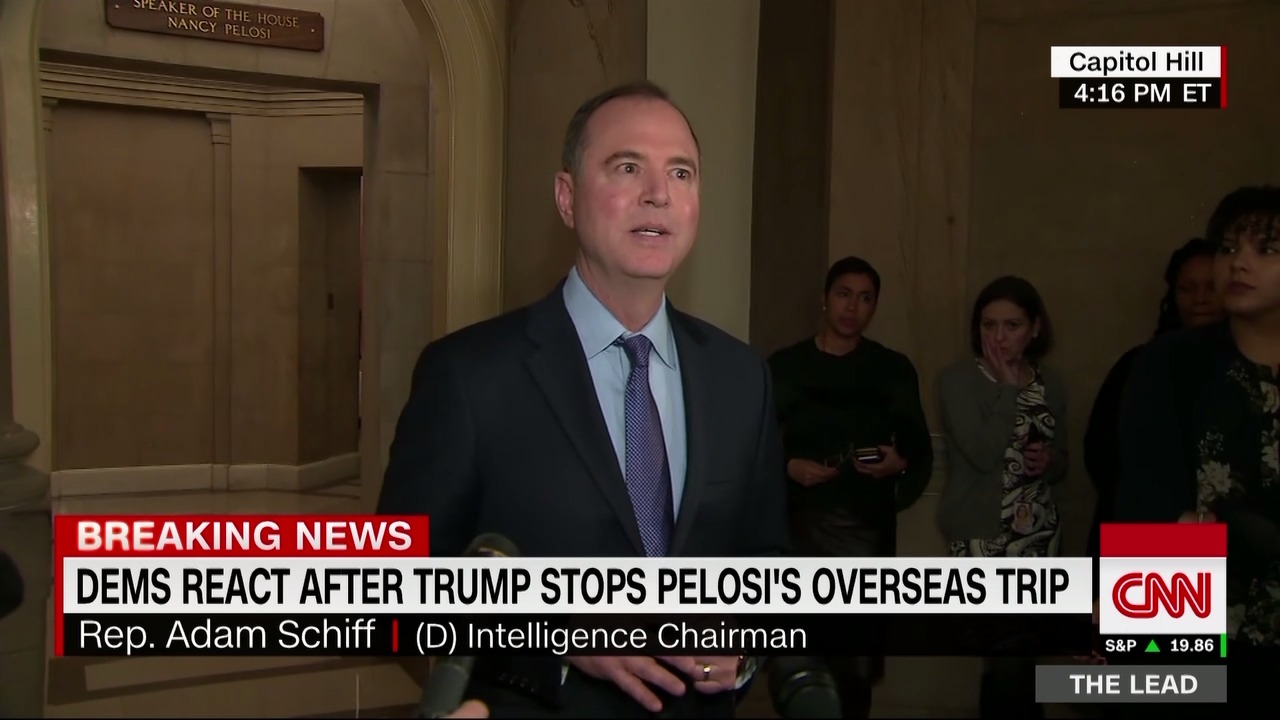 Democratic Rep. Adam Schiff criticized the actions of President Trump and accused the White House of hypocrisy with administration officials traveling to Davos.

Schiff went on to say that Trump has "acted like he's in the fifth grade."

He also said the President irresponsibly revealed a trip to a war zone. (Pelosi had been scheduled to use military aircraft for her trip to Afghanistan.)

The speaker’s office, Schiff said, spoke with the Defense Department, which was caught off guard by the President's actions.

He said the House would continue its oversight of the administration but would not say if the trip was canceled.

Separately, a Pelosi aide said the trip was supposed to be five days — not seven — as the White House claimed.

President Trump has been watching the coverage of his letter to Speaker of the House Nancy Pelosi this afternoon and is "pleased" with the results, a White House official said.

Some background: Trump sent a letter Pelosi today informing her that he was canceling the military aircraft she would have used in an upcoming overseas trip because of the shutdown.

Pelosi was scheduled to leave for her trip this afternoon, two White House officials told CNN.

Trump's actions come one day after Pelosi asked the President to find a new date for his State of the Union address due to the ongoing shutdown.

Sen. John Cornyn, a member of Republican leadership, said the shutdown fight between President Trump and House Speaker Nancy Pelosi had "too much childishness."

Asked about the mood toward the shutdown, Cornyn told reporters it was "foul."

"Too much childishness. Not enough seriousness. People are getting hurt," he said.

Asked if Trump should have canceled the military aircraft intended for Pelosi's overseas trip, he said, "It's like tit-for-tat. I thought what she did was petty, vindictive, and this certainly doesn't elevate the debate."

The State Department is ordering its staff back to work next week, pledging that it will find the money to pay them despite the partial government shutdown.

In an "urgent message" issued today, the 27th day of the shutdown, Deputy Under Secretary for Management Bill Todd told staff that "as a national security agency, it is imperative that the Department of State carries out its mission. We are best positioned to do so with fully staffed embassies, consulates, and domestic offices."

House Speaker Nancy Pelosi’s spokesperson has refuted some of what President Trump said about the trip in his letter to her.

Her spokesperson Drew Hammill said in a series of tweets that the military aircraft that was supposed fly a congressional delegation to Afghanistan this weekend, "included a required stop in Brussels for pilot rest."

"In Brussels, the delegation was scheduled to meet with top NATO commanders, U.S. military leaders and key allies–to affirm the United States’ ironclad commitment to the NATO alliance," Hammill tweeted.

The trip to Afghanistan, he said, did not include a stop in Egypt. (Trump said Pelosi was headed to Egypt in his letter.)

Pelosi's spokesperson went on to said that "the purpose of the trip was to express appreciation & thanks to our men & women in uniform for their service & dedication, & to obtain critical national security & intelligence briefings from those on the front lines."

"The President traveled to Iraq during the Trump Shutdown as did a Republican CODEL led by Rep. (Lee) Zeldin," Hammill tweeted.

Two Trump administration officials say the trip to Davos for the World Economic Forum is still on.

President Trump canceled his appearance at the forum because of the ongoing government shutdown. Instead, Treasury secretary Steven Mnuchin will lead the delegation. Here's who else is going:

They felt completely caught off guard when Pelosi publicly released her letter calling on President Trump to postpone his State of the Union address, or deliver it in writing.

Trump has been frustrated by coverage of the shutdown — at times asking why it seemed that the Democrats had the upper hand since he felt they did — and aides agreed this would be the perfect response.

Despite a White House official telling the pool this was not a response to Pelosi, another official made clear it is “retaliation.”