The White House sent invitations to a bipartisan group of lawmakers for a meeting Tuesday afternoon aimed at finding a solution to ending the government shutdown — now in its 25th day as the longest in US history — but Democrats said they weren't going.

White House press secretary Sarah Sanders confirmed no Democrats were expected to attend, listing instead nine Republican members of the House who will.

"Today, the President offered both Democrats and Republicans the chance to meet for lunch at the White House," Sanders said in a statement. "Unfortunately, no Democrats will attend. The President looks forward to having a working lunch with House Republicans to solve the border crisis and reopen the government. It's time for the Democrats to come to the table and make a deal."

About those invites: Several House Democrats who had been invited to the White House told CNN in advance of the meeting they had been given little to no information about what the meeting would entail and have either rejected the invite or wouldn't confirm whether they would attend.

The invitations did not all go out at once, but over the course of Monday night, and consisted of a three-line email asking only if the member would "attend lunch at the White House tomorrow, January 15 at 12:30 PM," according to a copy read to CNN. The email was sent on behalf of the President.

Seven of the House Republicans who came to the White House for lunch spoke to reporters following their meal with the President, vice president, and other administration officials.

The consensus amongst the Republicans: "Disappointment.”

“This was supposed to be a bipartisan lunch,” Illinois Rep. Rodney Davis said, asking, “If you don’t show up to the table, how in the world are we ever going to come to a solution?”

We're 25 days into the government shutdown, and it was still unclear if — or how — the Republicans were willing to negotiate with their Democratic colleagues.

Indiana Rep. Susan Brooks implored Democrats “to come to the table,” adding that she would “like to see proposals going back and forth every day.”

Michigan Rep. Jack Bergman, who was not on the list of attendees provided by the White House, also lamented the lack of Democrats negotiating.

“I came here to work with my colleagues from all sides of the political spectrum on issues that are of importance to all of us,” he said. “We owe it to our citizens and we owe it to the people who want to come here legally.”

House Democrats are continuing their efforts to put pressure on Senate Republicans with another series of bills this week.

They are offering three continuing resolutions to reopen all closed agencies until February. Here's when they plan to bring up the bills:

But remember: GOP Leader McConnell’s position remains unchanged — he will not bring anything to the Senate floor without President Trump’s support. Trump has made explicitly clear he will not support reopening the government before a deal on border wall funding is completed.

The former National Park Service director who ordered national parks closed during the 2013 government shutdown criticized the decision to keep the parks open during the current shutdown at a hearing today.

“The decision by President Donald Trump and DOI Secretary Ryan Zinke to leave the parks open and to furlough the NPS is an abdication of their stewardship responsibilities to our national parks,"Jon Jarvis said at a hearing on the government shutdown held by House Democrats. (Note: As of the new year, Zinke is no longer Interior Secretary, but was secretary when the shutdown began in December.)

Jarvis worked for the park service for four decades and was appointed director in 2009 by President Barack Obama. He retired in 2017.

Jarvis also criticized the decision to use entrance fee funds to fund some park operations. Those activities are normally funded by Congress.

“Now on one hand I am positive that the employees are happy to return to work and be paid. On the other hand, these funds were intended by law to enhance the visitor experience and the resource and not for basic operations. By burning through these accounts for operations, the parks will not be able to use the funds to address their maintenance backlogs or to improve the park for the visitor,” Jarvis said.

Another former senior park service leader who testified at the hearing said the shutdown leaves parks unprepared for the summer travel season.

“Irreparable harm has occurred already occurred to park operations as well and will steadily increase the longer the shutdown goes on. When and if the shutdown ends, that interrupted work will begin, but much of it cannot be accomplished in the time remaining before the onset of the busy summer visitor season,” said Dick Ring, a former associate director of the park service and superintendent of several parks including the Everglades.

Several House Democrats who have been invited to the White House to meet with President Trump said they have been given little to no information about what the meeting would entail and have either rejected the invite or wouldn’t confirm whether they would attend.

The invitations did not all go out at once, but over the course of the evening last night. Reps. Stephanie Murphy of Florida and Lou Correa of California, two co-chairs of the moderate Blue Dog Coalition, both declined the invitations, according to sources.

“It’s kind of a mess,” one Democratic member who had received an invitation told CNN.

“We want to work with rank-and-file Democrats. Obviously what we’re seeing right now is that Speaker (Nancy) Pelosi has refused to provide a counter offer … So we’re gonna talk to those individuals, to those Democrats, see if we can make some inroads. The President also will be bringing over the Problem Solvers Caucus so that’s another opportunity to talk to congressional members. We want to be able to come to a solution and negotiate," she said.

Some background on the meeting: Trump and his team are deploying an age-old legislative strategy — go after the most vulnerable members of the opposite party and try and pick them off. In this case, invitations were sent last night to a group of moderate House Democrats hailing from districts Trump won in 2016. This is the next play — following last week’s public messaging blitz — to try and shake loose congressional Democrats who, to this point, have shown very little day light between one another.

As to whether there are splits in the Democratic caucus the President can take advantage of, House Majority Leader Steny Hoyer said this: “We are totally united. Totally.”

House majority leader Steny Hoyer said if the government is still partially shut down next week, the House will not be in recess.

Hoyer said that doesn’t mean lawmakers be in Washington the entire week. On days they’re not there, members will be given a 24-hour notice to come back and vote on a potential deal.

Representatives were scheduled to have a work period in their districts, opposed to being in session in Washington. 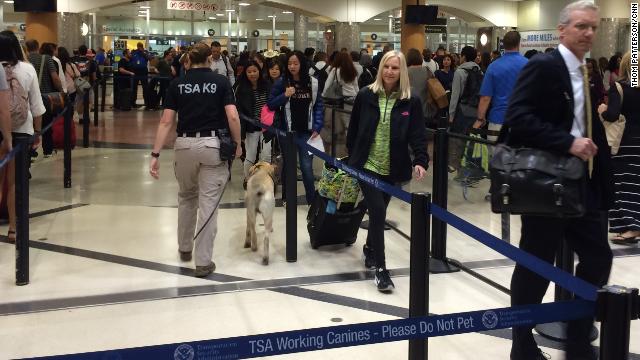 Across US airports, unscheduled absences among TSA staffers are significantly higher than they were a year ago.

"Yesterday’s complete figures show that TSA experienced a national rate of 6.8 percent of unscheduled absences compared to a 2.5 percent rate one year ago on the same day," the TSA said in a statement.

On Monday, the airport’s Director of Communications Elise Durham told CNN the long security lines were in part due to short staffing at TSA checkpoints.

It's the 25th day of the shutdown, now the longest in US history, and talks are gridlocked.

The pain that usually jars lawmakers back to the table to make a deal hasn't had that effect yet: Hundreds of thousands missed their paychecks last week. Active duty members of the US Coast Guard — 40,000-plus of them — miss their first paychecks Tuesday. Growing wait lines due to Transportation Security Administration absences are plaguing major airports. Congress has ground to a virtual halt.

With things at a stalemate, here are two key events we're watching today: 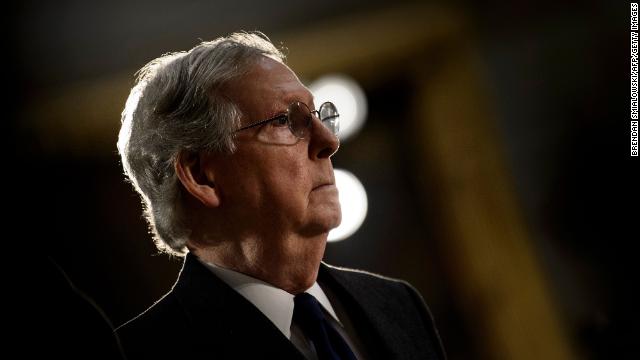 Senate majority leader Mitch McConnell’s position remains unchanged: He will not bring anything to the Senate floor without President Trump’s support. President Trump has made explicitly clear he will not support re-opening the government before a deal on border wall funding is completed.

McConnell isn’t feeling pressured to buckle on the above point by his conference, according to several senators and senior aides.

Yes, it’s true senators are frustrated and most, in candid moments, would acknowledge being completely flummoxed by what the President would accept for a final deal. But they are largely behind McConnell — and that shows no sign of changing any time soon.

This position infuriates Democrats, who have said repeatedly, in just about every venue and platform possible, McConnell should force the President’s hand and bring the House proposals to the floor. Senate minority leader Chuck Schumer has repeatedly gone after McConnell for abdicating his responsibility as majority leader.