Our live coverage has ended for the day. See how the committee vote unfolded in the posts below.

Blackburn said that Durbin called some of the questions by Republicans "vile" and "baseless" despite the fact that she believed they were raising "legitimate concerns" about child pornography sentences handed down by Jackson. Blackburn added that Republicans on the committee made reasonable requests for documents from these cases that were not turned over.

Blackburn said these "questions are not attacks" and it would be a "dereliction of duty not to ask tough questions."

After she was finished, Durbin responded, stating that it was his opinion that the majority of questions for Jackson from Republicans were fair and respectful. He noted that he "never named a name" when he criticized the GOP questions.

Durbin then reiterated his point that he thinks some of the Republican questions went "too far" and "don't reflect the reality of who [Judge Jackson] is or what she's accomplished."

On the question of turning over documents to the committee, Durbin said that some of these documents, specifically presentencing reports from some of Judge Jackson's cases, are records that the Senate Judiciary Committee has never requested. He said that some of the records are "confidential in nature" and added when he spoke to several Republicans about the matter, they agreed it wasn't appropriate to disclose those reports.

A spokesperson for Sen. Alex Padilla, who sits on the Senate Judiciary Committee, says the California Democrat is delayed in returning to Washington, DC, today “due to a passenger medical emergency” on his flight from LAX. However, he is expected to arrive later this afternoon.

A spokesperson for the committee told CNN that Padilla cannot vote by proxy if he plans to vote 'yes' to advance Judge Ketanji Brown Jackson’s nomination out of the committee. The spokesperson said that according to the Senate Parliamentarian’s reading of the rules, only negative proxies would count.

The committee spokesperson said the committee will not hold the final vote until Padilla returns.

Some more context: The committee is made up of 11 members of each party, and every Republican on the committee is expected to vote against advancing Jackson’s nomination. However, Senate Democrats are still expected to put her nomination to a full confirmation vote on the floor in the coming days.

Padilla’s delayed arrival is not expected to affect the committee’s timeline by more than a few hours.

After several Republicans brought up the way Democrats approached past GOP-supported judges – like retired Circuit Judge Janice Rogers Brown and Justice Brett Kavanaugh – Sen. Cory Booker, a Democrat from New Jersey, kicked off his statement with a "Seinfeld" allusion.

“I often think maybe we should be holding this hearing during December. Because Mr. Chairman, I don't know you know about the vaunted holiday of Festivus which is the holiday for the rest of us during the holidays,” Booker said, referring to a holiday celebrated by the characters of the 1990s sitcom.

“And one of the aspects of Festivus is the airing of grievances and I think that we've had probably the best Festivus celebration here in this hearing over the last week or so because there's been a lot of airing grievances,” Booker said.

As the Senate Judiciary Committee meeting on Judge Ketanji Brown Jackson's nomination continues, across the street, the Supreme Court ruled Monday that a New York man could go forward with a malicious prosecution claim against police even though he wasn't ultimately acquitted for the underlying charge, lowering the bar for when such civil lawsuits for damages can be brought under certain circumstances.

"A plaintiff need only show that his prosecution ended without a conviction," Justice Brett Kavanaugh wrote for the 6-3 majority made up of three conservatives and three liberals, noting that in the case at hand charges were ultimately dismissed. 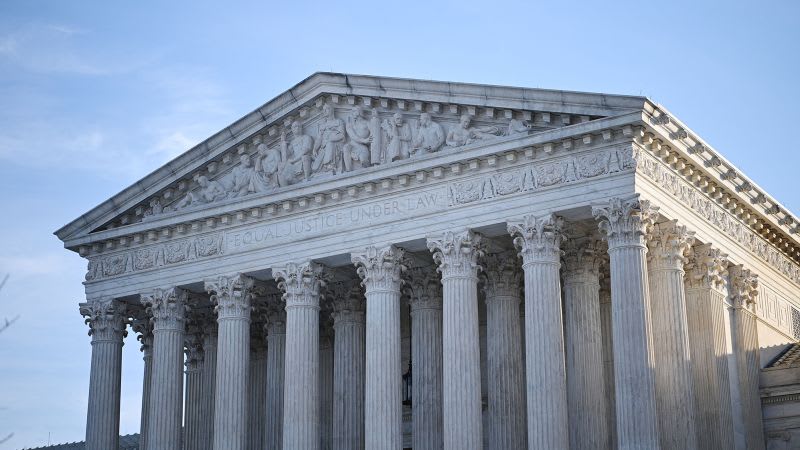 Sen. Amy Klobuchar, a Democrat from Minnesota, said that if confirmed, Judge Ketanji Brown Jackson will "walk into that court with her head held high" because she is "opening up that court to make every little girl and boy in America to realize that anything and everything is possible."

Klobuchar said that Jackson "is truly an inspiration to young Black girls" like an 11-year-old from DC whose dad stopped Klobuchar on a walk one day and presented her with his daughter's letter written to President Joe Biden on why he should consider her as his SCOTUS nominee.

"I was on a walk and her dad, I did not know him, jumped out of a car because he saw me walking, to bring a letter to me that she had written the President of the United States ... She asked President Biden that she be considered when he was looking for justices," Klobuchar said.

Klobuchar added that the young girl noted in her letter "that with her age she could remain on the court for at least 80 years."

"Her argument was that she wanted to be the voice for children. And she said, 'I live a few blocks from the Supreme Court so it will be easy for me to get there,'" Klobuchar said.

The senator said that after Judge Jackson was nominated, the 11-year-old said, "If I'm going to be snubbed, it couldn't be for a better candidate."

"Over our nation's history .. there's been something for everyone to love or hate, from Plessy vs. Ferguson — which established the shameful ‘separate but equal doctrine’ for public schools ultimately overruled in Brown versus Board of Education — to Obergefell, which mandated same-sex marriages,” Cornyn said.

He went on to criticize court decisions that created "a right that is not even mentioned in the Constitution,” as something that puts into question the “independence” and “legitimacy” of the Supreme Court.

Cornyn grilled Jackson at length about Obergefell vs. Hodges decision, asking at last month’s hearings whether the ruling was "an act of judicial policymaking."

On Monday, Cornyn said Jackson wouldn’t answer his questions on so-called unenumerated rights, as he complained about her lack of a judicial philosophy.

What Jackson said during the hearings: Jackson outlined what she described as her “methodology” for approaching cases when she faced lawmaker questions last month.

Her comments came in response to a question from Senate Judiciary Chairman Dick Durbin of Illinois, who asked her to elaborate on her judicial philosophy, as Republicans have claimed she has not yet been specific enough on that point. She said that the methodology she uses ensures that she is impartial and that she is “adhering to the limits” of her “judicial authority.”

“I am acutely aware that as a judge in our system I have limited power and I am trying in every case to stay in my lane,” she said.

Describing a three-step process, Jackson said step one is ensuring that she was “proceeding from a position of neutrality,” adding that she clears her mind about about any “preconceived notion” for how the case should come out. Step two is taking all the "appropriate inputs” for the case — the arguments, written briefs, hearings, friend-of-the-court arguments, as well as the factual record. The final step is the interpretation of the law to the facts of the case. “This is when I am observing the constraints” on her judicial authority, she said

The 22 members of the Senate Judiciary Committee are delivering speeches now about their positions on Judge Ketanji Brown Jackson's Supreme Court nomination before voting.

Senate Judiciary Chair Dick Durbin, a Democrat from Illinois, said committee members would have 10 minutes for their statements.

An 11-11 tie is expected in the panel today since no Republican members of the committee appear poised to vote for her. To advance the deadlocked nomination to the floor, the Senate will need to vote on a motion to discharge her from committee, which they are expected to do also on Monday.

Four hours of debate are allotted for this motion. Senators have been advised that a vote to discharge won’t take place before 5:30 p.m. ET, but depending on how long the committee action takes, it could be later.

What happens next: On Tuesday, Senate Majority Leader Chuck Schumer is expected to file a procedural motion to break a Republican filibuster of Jackson.

Wednesday will be the required intervening day on that motion when floor speeches on her nomination are likely.

Sometime Thursday, probably in the morning, there will be a vote to break the filibuster of Jackson. A simple majority is needed, which she is expected to get because she has the support of all 50 Democratic senators and at least one Republican, Sen. Susan Collins of Maine.

After the filibuster is broken, there are up to 30 hours of additional debate time allotted. Some of that could be yielded back, but it all might be used since most Republicans oppose her and will want to make speeches.

This means a final confirmation vote may come late Friday afternoon or evening, but we can’t say for certain when.

Sen. Lindsey Graham, a Republican from South Carolina, dug into his reasons for voting no on Judge Ketanji Brown Jackson after being one of the few Republicans to support confirming her for the US DC Circuit Court of Appeals last year.

Graham said he didn’t think twice about voting for Jackson for the DC Circuit, but the Supreme Court is “different” than an appellate role.

He claimed that President Biden's selection of Jackson was "embraced by the most radical people in the Democratic movement to the exclusion of everybody else," adding that there were other contenders Biden could have nominated that would have gotten 60 to 65 votes in the Senate.

Graham went on to say that if Republicans controlled the Senate that Judge Jackson would not have gotten a hearing before the committee.

"If we get back the Senate and we are in charge of this body and there is judicial openings, we will talk to our colleagues on the other side, but if we are in charge, she would not have been before this committee. You would have had somebody more moderate than this," he said.

Sen. Patrick Leahy, a Democrat from Vermont, said Judge Ketanji Brown Jackson put on a "masterclass" during her confirmation hearing, displaying "what it means to be an independent, fair-minded justice.

"Her grace, intellect, temperament, wit are exactly what Americans want and deserve on the nation's highest court. I will proudly and confidently vote 'aye' to advance her historic nomination to the US Senate," Leahy said during his remarks.

He called Jackson "one of the most objectively well-qualified Supreme Court nominees" he has ever considered which he noted is "rooted in decades of experience in evaluating these nominees."

"I know that is going to fall on deaf ears to some members of this committee," Leahy continued. "Members who unfortunately care more about seeing their soundbites in social media appeals than seriously and respectfully questioning nominees."

He said that some members of the committee "badgered" Jackson, to the point where they "even refused to respect basic rules and the quorum of the committee." Still, Leahy said, Jackson "maintained a calm demeanor" and "confidence" in the face of "disrespectful behavior" — which "underscores her remarkable temperament."

"That is an attribute we need on our nation's highest court. But I hope there are other senators, those who I give great credit for asking serious questions in treating the nominee with respect will see this historic moment for what it is. A chance to unite across party lines, around one of the most brilliant legal minds in our country just as we did three times before on a previous confirmation. A chance to elevate the first ever Black woman to the Supreme Court widening the lens of our Supreme Court representation."