Our live coverage has ended. Read more about today's events in the posts below.

Judge Ketanji Brown Jackson spoke of the responsibility she will have as the first Black woman to sit on the Supreme Court, while also paying homage to those who paved the path for her along the way.

“I am feeling up to the task, primarily because I know that I am not alone. I am standing on the shoulders of my own role models, generations of Americans who never had anything close to this kind of opportunity, but who got up every day and went to work believing in the promise of America,” she said during remarks at the White House on Friday.

“My grandparents on both sides, who had only a grade school education but instilled in my parents the importance of learning. To my parents who went to racially segregated schools growing up and were the first in their families to have the chance to go to college," Jackson said.

As her emotional address continued, the soon-to-be Supreme Court justice noted other specific figures who have had an influence on her career.

“I am also ever buoyed by the leadership of generations past who helped to light the way. Dr. Martin Luther King Jr., Justice Thurgood Marshall, and my personal heroine, Judge Constance Baker Motley,” Jackson said. “They and so many others did the heavy lifting that made this day possible. ... I think of them as the true path-breakers.”

Jackson quoted one of the nation’s most gifted and heralded writers.

“No one does this on their own. The path was cleared for me so that I might rise to this occasion,” she said.

“In the poetic words of Dr. Maya Angelou, ‘I do so now while bringing the gifts my ancestors gave. I am the dream and the hope of the slave.’”

In her speech at the White House on Friday, Ketanji Brown Jackson noted the long road it took to have a Black woman appointed to the US Supreme Court.

"It has taken 232 years and 115 prior appointments for a Black woman to be selected to serve on the Supreme Court of the United States," she said amid applause and cheers. "But we've made it. We've made it. All of us. All of us."

"Our children are telling me that they see now more than ever that here in America, anything is possible," she said.

She acknowledged that she has been "flooded with thousands of notes" from people, but the ones from children are "especially meaningful."

"Because more than anything, they speak directly to the hope and promise of America," she said.

The justice-to-be paid tribute to her role models as she recognized that children now see her as one.

Children "also tell me that I am a role model, which I take both as an opportunity and as a huge responsibility," she said. "I am feeling up to the task, primarily because I know that I am not alone. I am standing on the shoulders of my own role models — generations of Americans who never had anything close to this kind of opportunity, but who got up every day and went to work believing in the promise of America."

Judge Ketanji Brown Jackson opened her remarks at a White House event celebrating her historic Supreme Court confirmation by marking the significance of the moment and expressing her "heartfelt thanks."

"It is the greatest honor of my life to be here," she said, as she continued to thank her family, faith, her mentors, colleagues, President Biden for nominating her and former President Barack Obama for appointing her to a federal district court, among others.

"Over these past few weeks, you have heard a lot from me and about me so I hope to use this time primarily to do something that I have not had sufficient time to do — which is to extend my heartfelt thanks to the many, many people who have helped me as part of this incredible journey," she said. 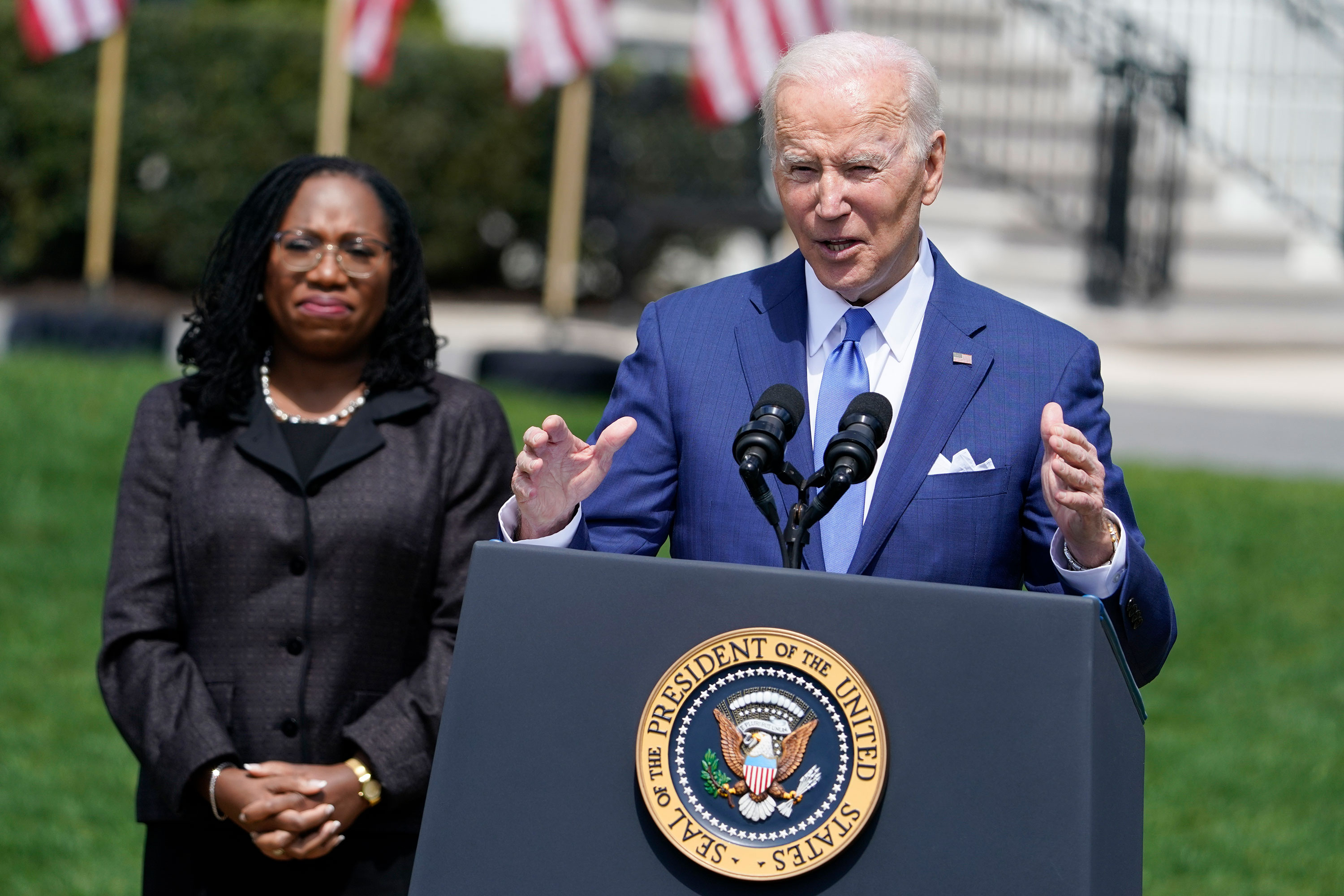 President Biden spoke at the White House event celebrating the confirmation of Judge Ketanji Brown Jackson as the next Supreme Court justice, and said he knew she would have to go through "a painful and difficult confirmation process," but the actual confirmation went "well beyond that."

"I knew the person I nominated would be put through a painful and difficult confirmation process. But I have to tell you, what Judge Jackson was put through was well beyond that. It was verbal abuse, the anger, the constant interruptions, the most vile, baseless assertions and accusations," he said Friday.

But she showed "incredible character and integrity" in the face of it all, he added.

"Poise and composure. Patience and restraint. And, yes, perseverance and even joy," he said amid applause and cheer for the judge. "Judge, you are the very definition of what we Irish refer to as dignity. You have enormous dignity."

Biden shared that when he decided to run to be the President of the United States, he could see that nominating a Black woman to the Supreme Court would be a "day of hope."

"A day of promise, a day of progress, a day when once again the moral arc of the universe... bends a little more toward justice," he said.

"Judge Jackson, you will inspire generations of leaders. They will watch your confirmation hearings and read your decisions," Harris said Friday.

"In the years to come, the court will answer fundamental questions about who we are and what kind of country we live in. Will we expand opportunity or restrict it? Will we strengthen the foundations of our great democracy? Or let them crumble? Will we move forward or backward? The young leaders of our nation will learn from the experience, the judgment, the wisdom that you, Judge Jackson, will apply in every case that comes before you."

Harris applauded that Americans will see four women justices at the Supreme Court for the first time and shared that she wrote a letter to her goddaughter after the confirmation vote.

"I told her that I felt such a deep sense of pride and joy. And about what this moment means for our nation and for her future," she said.

"I will tell you, her braids are just a little longer than yours. But as I wrote to her, I told her what I knew this would mean for her life and all that she has in terms of potential," Harris said. "So indeed the road toward our more perfect union is not always straight. And it is not always smooth. But sometimes it leads to a day like today."

As Judge Ketanji Brown Jackson stood beside him, President Biden praised her confirmation to the Supreme Court and the impact it will have on the country.

"Yesterday we all witnessed a truly historic moment, presided over by the vice president. There are moments that people go back in history and they're literally historic. Consequential. Fundamental shifts in American policy," Biden said.

"And today is a good day. A day that history is going to remember, and in the years to come they are going to be proud of what we did — what Dick Durbin did as chairman of the committee," Biden said.

President Biden is hosting an event at the White House to mark the historic confirmation of Judge Ketanji Brown Jackson to the Supreme Court.

Biden, Vice President Kamala Harris and Jackson will all deliver remarks at the event on the South Lawn of the White House.

The Senate on Thursday confirmed Judge Jackson in a vote that paves the way for her to become the first Black woman to serve on the nation's highest court. Jackson's confirmation is a significant bipartisan victory for Democrats that comes at a time when the US faces a number of challenges at home and abroad, including Russia's invasion of Ukraine and sky-high inflation.

Vice President Kamala Harris tested negative for Covid-19 today, a White House official said, adding that the vice president will not wear a mask while “distanced” but will when she is around others.

Harris is at the White House’s confirmation celebration for Judge Ketanji Brown Jackson currently being held outside on the South Lawn.

“The Vice President continues to be tested for COVID-19. She tested today, and was negative. While she is distanced today, she will not be masked. When she is around others, she will mask,” the official said.

This guidance comes after her office faced questions about her lack of mask use in the Senate chamber Thursday when she presided over the vote to confirm Judge Jackson to the Supreme Court. A White House official said Harris had consulted with a White House physician, was “practicing social distancing” and had “limited and brief interactions from her chair.”

But current CDC recommendations specify that an individual who is considered to be a close contact with someone who tested positive for Covid-19 should wear a mask around others for 10 days after from the date of the last contact. The guidelines do not say that person can be maskless around others if they are practicing social distancing.

In revealing communications director Jamal Simmons’ positive Covid test and Harris’ close contact with him, the vice president’s office said yesterday that Harris would “follow CDC guidance for those that have been in close contact with a positive individual.” It separately pointed CNN to specific CDC guidance that Harris would follow, which in part says the person should “wear a well-fitting mask while around other people for 10 days from the date of last close contact.”

Judge Ketanji Brown Jackson, who was confirmed by the Senate to be the next Supreme Court Justice on Thursday, will remain in her current position on the US Court of Appeals until she is sworn in this summer following Justice Stephen Breyer's retirement, the White House says.

"Judge Jackson will remain on the U.S. Court of Appeals for the DC Circuit until she is sworn in as an Associate Justice on the Supreme Court following Justice Breyer’s formal retirement at the end of the Court’s current term. That will take place at the end of June or the beginning of July. Judge Jackson will continue to recuse from all cases on the D.C. Circuit as she has since the President nominated her," a White House official tells CNN.

Jackson will appear alongside President Biden at an event today at the White House.

After Breyer retires, Jackson will take two oaths and eventually have an investiture ceremony, which generally entails having the chief justice administer the Constitutional Oath privately to the new justice in the justices’ conference room, the commission is presented and read aloud in the courtroom and the chief justice administers the Judicial Oath in the courtroom, according to the Supreme Court's website.