Our live coverage is concluding, for now. But we'll be back Monday with the latest in the Kavanaugh nomination fight.

Senate Judiciary Committee chairman Chuck Grassley said if there is no agreement tonight on testimony by Christine Blasey Ford, the committee would vote on the Brett Kavanaugh nomination on Monday.

The deadline has been extended to 10pm.

“Despite the fact that the July 30th letter remains hidden, my committee has been investigating the allegations and has heard from multiple witnesses since Sunday. Ms. Katz has discussed Dr. Ford’s allegations in numerous media interviews and said on TV Monday morning that Dr. Ford wants to share her account with the Senate Judiciary Committee. It’s Friday night and nothing’s been agreed to despite our extensive efforts to make testimony possible,” Grassley said. “I’m extending the deadline for response yet again to 10 o’clock this evening. I’m providing a notice of a vote to occur Monday in the event that Dr. Ford’s attorneys don’t respond or Dr. Ford decides not to testify. In the event that we can come to a reasonable resolution as I’ve been seeking all week, then I will postpone the committee vote to accommodate her testimony. We cannot continue to delay.”

"The fearful part is that good people will be afraid to serve their government. They won't want to take the chance of their reputation being sullied," he said while speaking at the Values Voter Summit.

He added: "First of all, sexual predators... it's abominable, there's no room for it. Having said that, we must recognize that there are two sides to every story."

Carson, who was speaking in a personal capacity at the Christian political conference, spoke at length about the importance of confirming Brett Kavanaugh into the Supreme Court. Carson said that "(Democrats) thought they had the courts, but it was snatched away from them in November of 2016."

"They realized that they are going to lose the courts for another generation," he said. "So what is left? Chaos and destruction."

Christine Blasey Ford and her legal team have until 5 p.m. ET to respond to the Senate GOP offer, a source says.

"I was appalled by the President's tweet," said the Maine senator, who spoke to reporters at an event Friday afternoon.

Collins, a crucial swing vote on Kavanaugh's nomination, added that "we should attempt to make this as comfortable a process for her as possible."

In a series of tweets Friday morning, President Trump called Kavanaugh "a fine man," and suggested that Ford should have come forward with her allegations earlier, casting doubt on her credibility.

Whether Brett Kavanaugh is successfully confirmed to the US Supreme Court has become a question of Senate math.

Republicans hold a slim 51-49 majority in the chamber. If all Democrats oppose his nomination, he'll need every Republican to vote yes. (If only one Republican opposes Kavanuagh, but every other Republican supported him, Vice President Mike Pence would have to cast a tie-breaking vote.)

Some Republicans are still undecided. Here are three we're watching — and what they've said about the judge:

Last night, Ford’s camp said that she couldn’t get to DC before Thursday because of everything her family is dealing with, a senior Democratic leadership aide tells CNN. This means Wednesday’s hearing date may be an issue for the talks going forward. 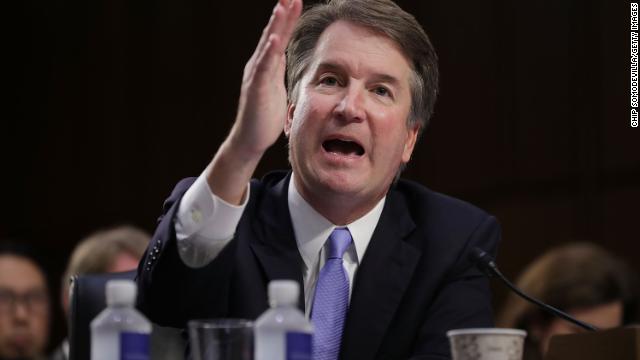 The US Marshals Service is investigating threats against Supreme Court nominee Brett Kavanaugh and his family, according to a source close to Kavanaugh.

As a judge, Kavanaugh gets Marshals Service protection.

A senior administration official previously told CNN that the number of death threats made against Supreme Court nominee Kavanaugh and his family have increased since Ford's allegations came to light. There are several current threats against the Kavanaughs that law enforcement deems credible, while several others have been opened and closed since he was nominated, sources said.

There are Democratic concerns about the Senate Judiciary Republicans' proposal for a hearing with Christine Blasey Ford — specifically with the GOP's plan to have outside counsel ask the questions.

"Outside counsel doesn’t vote on Kavanaugh. Senators do. Republicans need to do their jobs and not hide," a Senate Democratic leadership aide said.

This is not what Ford and her lawyers want: Ford's attorney Debra Katz said outside counsel would make the hearing appear too much like a trial.