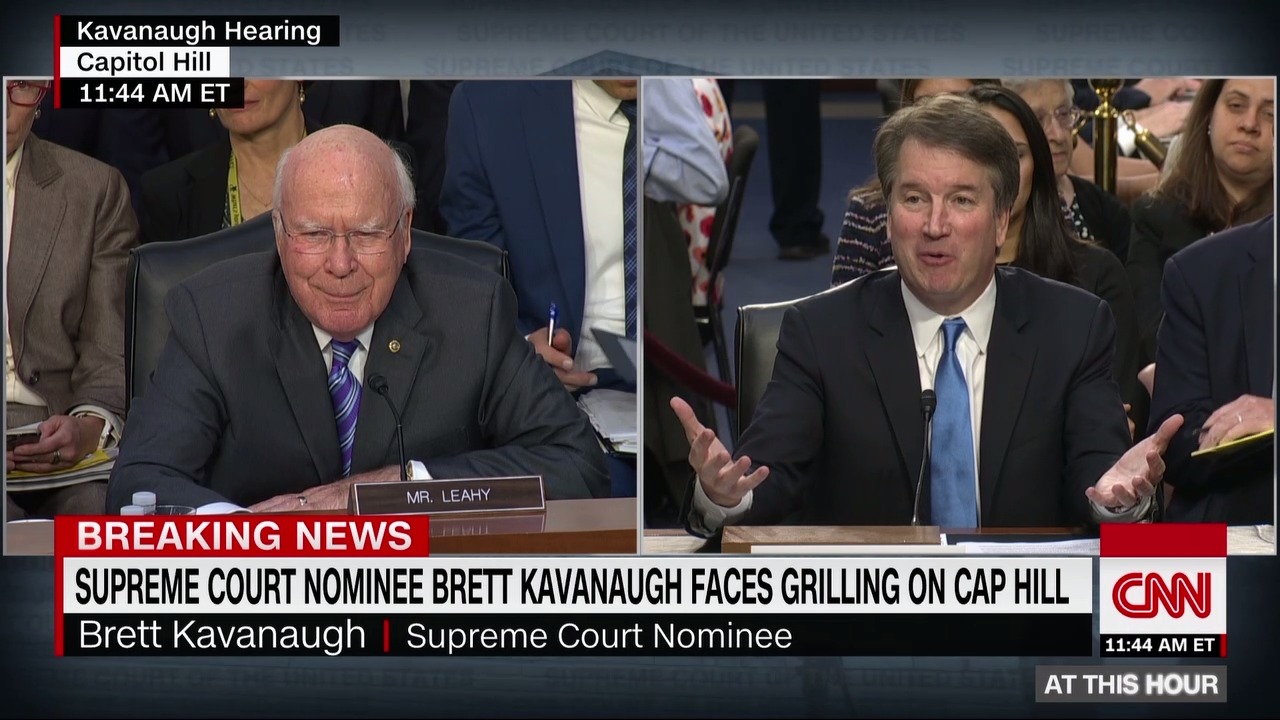 Judge Brett Kavanaugh was asked by Sen. Patrick Leahy whether President Trump has an absolute right to pardon himself as Trump has claimed.

Asked if the President could pardon someone "in exchange for a promise from that person that they wouldn't testify against him," Kavanaugh again demurred.

"I'm not going to answer hypothetical questions of that sort," he told Leahy.

Leahy replied: "I hope for the sake of the country that remains a hypothetical question."

Kavanaugh suggested his communications over the last number of years were infrequent except when working on a specific project together.

Kavanaugh denied knowing anything about the allegations before they came to light and said he was “shocked” by them, calling them a “gut punch” for him and the judiciary.

“No woman should be subjected to sexual harassment in the workplace,” especially in the judiciary he said.

Visit here for more of CNN's coverage on sexual misconduct in the courts. 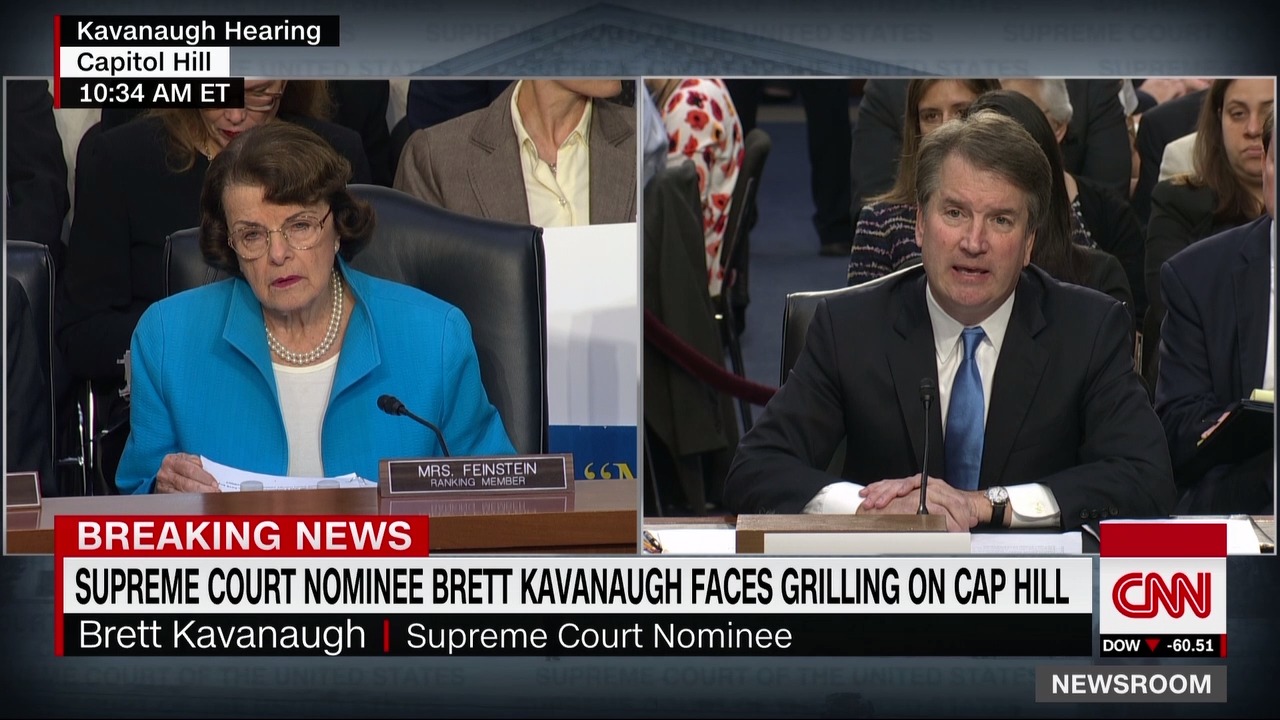 Sen. Dianne Feinstein asked Judge Brett Kavanaugh directly: "Let me ask you this. Can a sitting president be required to respond to a subpoena?"

Kavanaugh responded that the question was hypothetical.

Feinstein replied: "So you can't give me an answer on whether a president has to respond to a subpoena from a court of law?"

Sen. Dianne Feinstein just questioned Judge Kavanaugh's opinion on assault weapons, specifically what he's said in the past about how "common use" dictates the rights of Americans to own and continue to use them.

Kavanaugh said he follows Supreme Court precedents on the issue specifically as they relate to the Second Amendment, though admitted that doesn't mean "that there is no gun regulation permissible."

Feinstein questioned why assault weapons would be common use -- since they aren't commonly used.

Feinstein asked how he reconciles that with the amount of school shootings in America. "How do you reconcile that?"

"Senator, of course the violence in the schools is something we all detest and want to do something about. And there are lots of efforts I know underway to make schools safer. I know at my girls school they do a lot of things now that are different than they did just a few years ago in terms of trying to harden the school and make it safer for everyone. Guns, hand guns and semi-automatic rifles, are used for hunting and self-defense, but as you say, Senator, as you rightly say, they are used in a lot of violent crime and cause a lot of death."

In an exchange between Sen. Chuck Grassley and Judge Brett Kavanaugh, Grassley asks the Supreme Court nominee if anyone had asked him to "make any promises or assurances at all" regarding how he would rule in various cases.

Grassley followed up by asking Kavanaugh if anyone had asked him about his views on Roe v. Wade — the SCOTUS case that broadly legalized abortion across the United States. 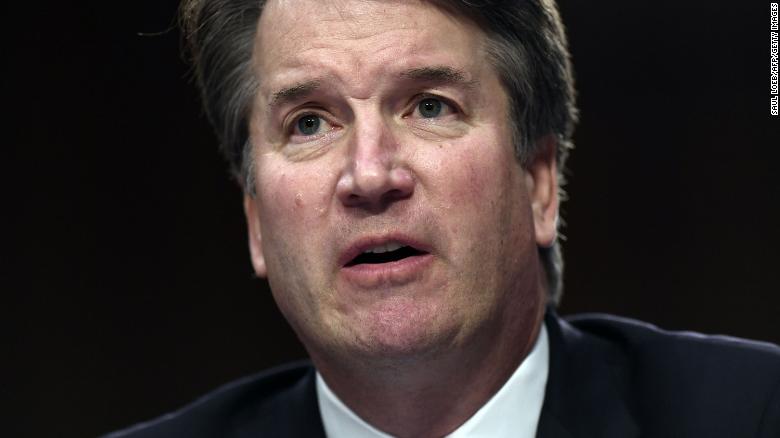 Judge Brett Kavanaugh told Sen. Chuck Grassley that he believed a pivotal Supreme Court case ordering President Nixon to disclose information in response to a criminal subpoena was "one of the greatest moments in American judicial history."

"You think about United States versus Nixon, which I’ve identified as one of the greatest moments in American judicial history, where Chief Justice Burger who had been appointed by President Nixon brought the court together in a unanimous decision to order President Nixon in a response to a criminal trial subpoenaed to disclose information," Kavanaugh said.

CNN's Ariane de Vogue notes that he’s said this about US v. Nixon before, but it contradicts one interview he did in the Washington law journal in 1999, in which he said the landmark opinion that ordered President Richard Nixon to turn over White House recordings toward the end of the Watergate investigation might have been "wrongly decided." 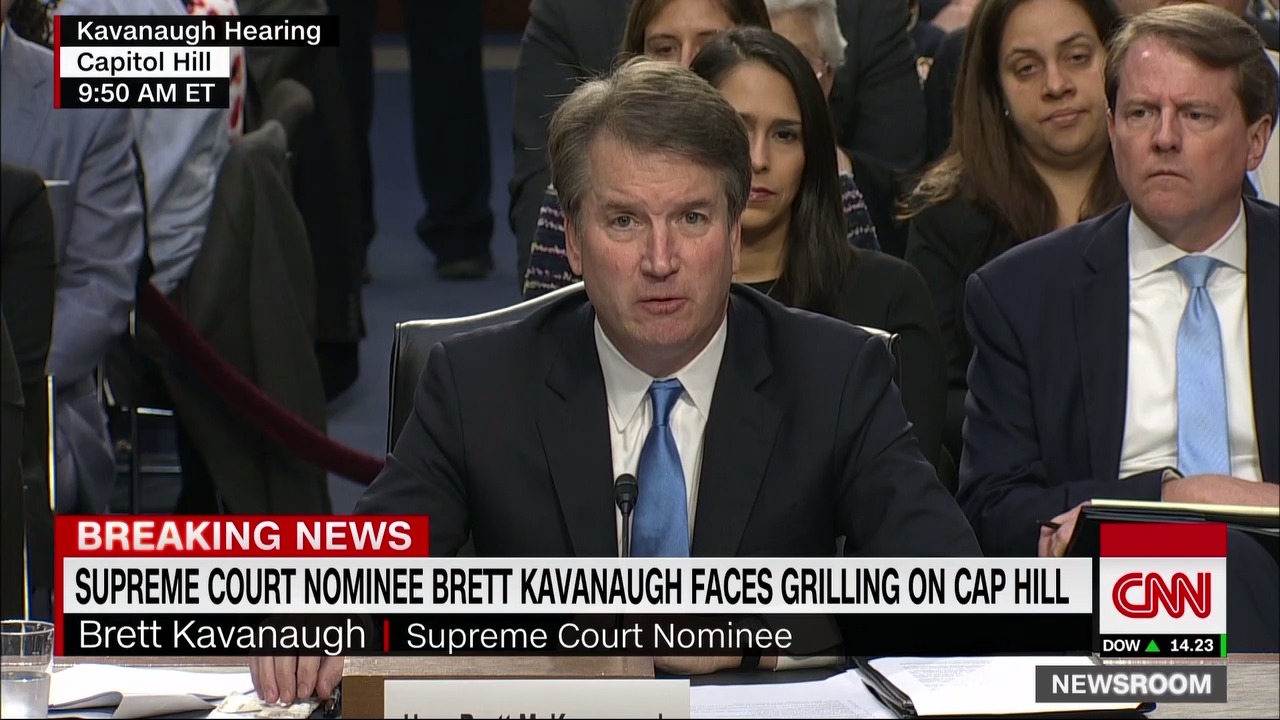 Sen. Chuck Grassley just asked Judge Brett Kavanaugh, in the first segment of questioning led by the chairman, to speak to his thoughts regarding judicial independence from the executive branch -- a key subject for anyone concerned about how Kavanaugh would rule on issues directly related to President Trump.

Sen. Chuck Grassley, chairman of the Judiciary Committee, opened today’s hearing by talking about the protesters that frequently disrupted yesterday’s. Citing NBC News, Grassley said they were interrupted 63 times and 70 people were arrested. He noted that the Constitution permits freedom of speech, but “we also were finally able to conduct our hearing the way it should be conducted.”