We just started the hearing again after a short break, and Judge Brett Kavanaugh started with an apology to Sen. Amy Klobuchar.

Kavanaugh and Klobuchar had a tense exchange before the break, with the senator asking him about his drinking habits, and the judge turning around and asking the same questions of her. ("I'm curious if you have," Kavanaugh asked after Klobuchar asked he he had ever drank so much he couldn't remember.)

"I responded by asking her a question, and I'm sorry I did. This is a tough process," Kavanaugh said. "I'm sorry about that."

"I appreciate that. I would like to add when you have a parent that's an alcoholic, you're pretty careful about drinking." (Klobuchar has talked extensively about her father’s alcoholism and the impact it had on her.)

In a tense back-and-forth, Democratic Minnesota Sen. Amy Klobuchar tried asking if Kavanaugh ever blacked out, but Kavanaugh repeatedly refused to answer -- and repeatedly attempted to turn it around on the Minnesota senator.

Klobuchar began by asking, "Was there ever a time when you drank so much that you couldn't remember what happened or part of what happened the night before?"

"No," Kavanaugh answered. "I remember what happened and I think you've probably had beers, Senator."

When Klobuchar asked again, Kavanaugh dodged, turning the question back on Klobuchar. "I'm curious if you have (blacked out)," Kavanaugh asked at one point.

Finally, Klobuchar exasperatedly answered, "I have no drinking problem, judge."

"Nor do I," Kavanaugh responded.

As Christine Blasey Ford testified, C-SPAN viewers did what they can do every day--call in and give their viewpoints on the day's political topics.

Some began calling in, sharing their own heartbreaking and personal experiences with sexual abuse.

If you, or someone you know, is dealing with the aftermath of a sexual assault, these organizations can help: 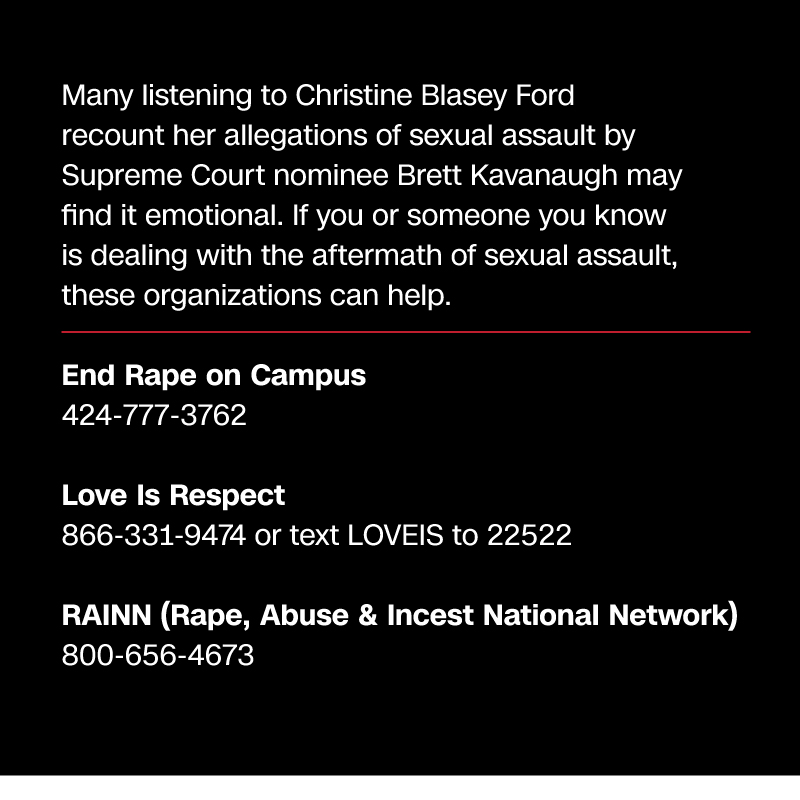 Wake up to a summary of today’s hearings and other big stories with CNN’s morning newsletter, “5 Things to know.”

The Republican senators who would not ask questions during Christine Blasey Ford’s testimony are now questioning Brett Kavanaugh — and furiously condemning their Democratic colleagues.

Rachel Mitchell, the prosecutor the Republicans hired to question Ford, is still in the hearing room, however, seated directly in front of them.

Here's a photo from the room: 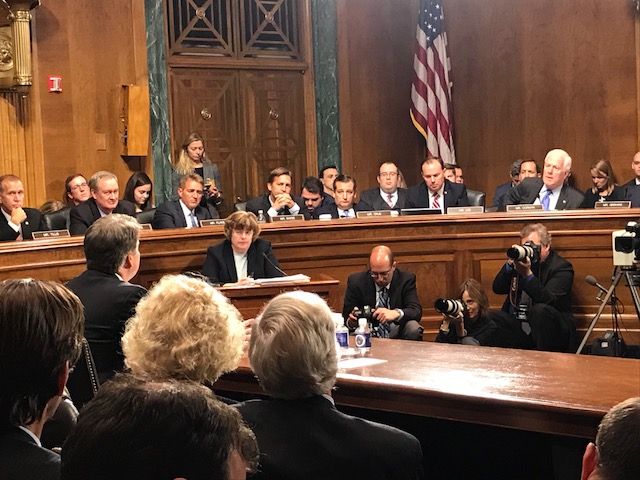 Brett Kavanaugh’s opening statement has calmed a number GOP aides and senators after a morning that was viewed as a potentially dire turn for his nomination, according to multiple GOP aides.

The aide says that no final decisions have been made about whether to move forward with a possible vote tomorrow — that won’t be locked in one way or the other until the hearing ends and the temperature is taken of the committee members and conference on the whole.

But Kavanaugh’s opening statement “went a long way to make it more likely.”

Another aide cautioned that the overall dynamics remain unchanged: It all comes down to a small number of senators and nobody knows where they stand right now.

But, the aide said, “This is exactly what most of our guys wanted to hear.”

Republican Sen. Lindsey Graham of South Carolina had harsh words for his Democratic colleagues, calling the handling of allegations against Judge Brett Kavanaugh since his nomination "the most unethical sham since I've been in politics."

"I cannot imagine what you and your family are going through," Graham said. "Boy, you want power. I hope you never get it. I hope the American people can see through this sham that you knew about it and you held it."

"You have interacted with professional women all your life, not one accusation. You're supposed to be Bill Cosby when you're a junior and senior in high school and all of a sudden you got over it. It's been my understanding that if you drug women and rape them for two years in high school you probably don't stop. Here's my understanding, if you lived a good life people will recognize it like the American Bar Association has, the gold standard. His integrity is absolutely unquestioned."

Watching from the White House, press secretary Sarah Sanders cheered him on.

Sen. Dick Durbin, a Democrat from Illinois, urged Brett Kavanaugh to ask White House Counsel Don McGahn to ask for an FBI investigation into the sexual assault allegations against him.

"Stop the clock," Grassley said. This committee is running this hearing, not the White House, not Don McGahn, not even you as a nominee."

Grassley then said the Senate would not suspend the confirmation process for Kavanaugh.

President Trump is still watching his Supreme Court nominee from the White House residence, a source says, as officials in the West Wing are glued to their TVs and reviewing Brett Kavanaugh’s performance.

Officials are telling each other they believe Kavanaugh hit the perfect tone in his opening statement, which they believe shifted the dynamic in his favor after a credible appearance by Christine Blasey Ford initially raised a lot of concern.

But before expressing confidence that things are back on track, aides say they are waiting to see how the coverage plays out tonight.