Republican Sen. Lindsey Graham of South Carolina had harsh words for his Democratic colleagues, calling the handling of allegations against Judge Brett Kavanaugh since his nomination "the most unethical sham since I've been in politics."

"I cannot imagine what you and your family are going through," Graham said. "Boy, you want power. I hope you never get it. I hope the American people can see through this sham that you knew about it and you held it."

"You have interacted with professional women all your life, not one accusation. You're supposed to be Bill Cosby when you're a junior and senior in high school and all of a sudden you got over it. It's been my understanding that if you drug women and rape them for two years in high school you probably don't stop. Here's my understanding, if you lived a good life people will recognize it like the American Bar Association has, the gold standard. His integrity is absolutely unquestioned."

Watching from the White House, press secretary Sarah Sanders cheered him on.

Sen. Dick Durbin, a Democrat from Illinois, urged Brett Kavanaugh to ask White House Counsel Don McGahn to ask for an FBI investigation into the sexual assault allegations against him.

"Stop the clock," Grassley said. This committee is running this hearing, not the White House, not Don McGahn, not even you as a nominee."

Grassley then said the Senate would not suspend the confirmation process for Kavanaugh.

President Trump is still watching his Supreme Court nominee from the White House residence, a source says, as officials in the West Wing are glued to their TVs and reviewing Brett Kavanaugh’s performance.

Officials are telling each other they believe Kavanaugh hit the perfect tone in his opening statement, which they believe shifted the dynamic in his favor after a credible appearance by Christine Blasey Ford initially raised a lot of concern.

But before expressing confidence that things are back on track, aides say they are waiting to see how the coverage plays out tonight.

In a statement, Bill Russo, a spokesperson for former Vice President Joe Biden, responded to comments Biden previously made in 1991.

"There is clearly an effort on the part of the White House and Senate Republicans to take out of context then-Senator Biden’s statements about the role of the FBI in the judicial nomination process to create a smoke-screen for their unprecedented refusal to have the FBI conduct an investigation into credible charges," the statement said.
"Senator Biden made those comments in response to Senator Hatch's attempts to frame the FBI's 1991 report on Clarence Thomas as exculpatory. His point was that the FBI plays an investigative role in the nomination process; they do not make recommendations. That is the sole responsibility of the Senate -- to advise and consent.
Vice President Biden believes that the FBI should have investigated in this case in advance of Dr. Blasey Ford's courageous testimony today, just as they did in 1991." 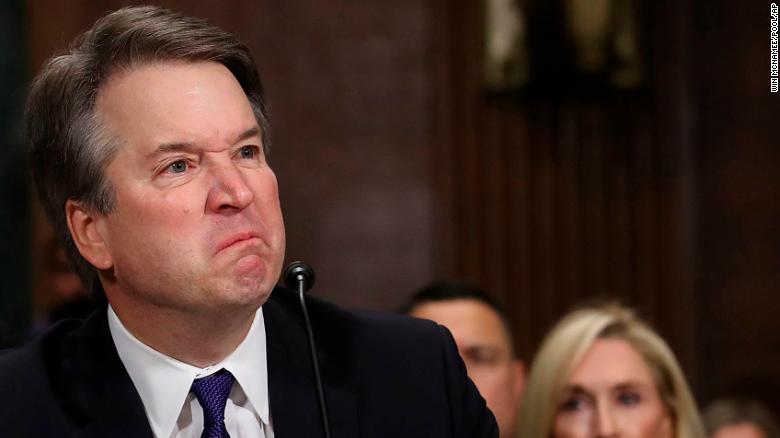 A Republican source close to Brett Kavanaugh and the nomination process explained that his performance in his Fox News interview troubled people inside at the White House, and among the GOP members and staffers on the committee, for its "stiffness."

"I think the stiffness in his Fox News interview set off some alarms. It felt over-rehearsed and wooden," the source said.

"This is real and raw, and he's taking risks by showing this much emotion but I think a lot of people will say they would've felt that same fury if their families had been through what he has," they added.

In a tense exchange, Judge Brett Kavanaugh interrupted Democratic California Sen. Dianne Feinstein as she lamented the inability of the FBI to interview witnesses and give Senate investigators “any facts.”

Kavanaugh had said in his opening statement that he would welcome “any kind of investigation: Senate, FBI or otherwise.”

“I wanted a hearing the next day. My family’s been destroyed by this Senator, destroyed. And whatever the committee decides. I’m all in immediately,” he told Feinstein.

Feinstein called it “terrible and hard” that the Senate is not “in a position to prove it or disprove” allegations like this, and needed to rely an “some outside authority.”

During an exchange with Feinstein, Kavanaugh was asked again if he was denying every allegation made against him -- by Ford, by Deborah Ramirez and by Julie Swetnick.

"That is emphatically what I'm doing," Kavanaugh said, adding: "The Swetnick thing is a joke. That is a farce."

Kavanaugh leaned back in his seat, appearing incensed.

"Would you like to say more about it?" Feinstein asked.

Judge Brett Kavanaugh acknowledged for the first line during today's Senate Judiciary committee hearing that he drank beer, he liked beer, and he and his friends "sometimes probably had too many beers."

Rachel Mitchell, the Arizona prosecutor asking questions on behalf of the Senate Republicans, then asked what he considered to be too many.

Kavanaugh responded, "I don't know. You know -- whatever the chart says. Blood alcohol chart," and chuckled.

Mitchell then asked if Kavanaugh ever "passed out from drinking."

He said no. "I've gone to sleep, but I've never blacked out. That's the allegation, and that's -- that's wrong."

Prosecutor Rachel Mitchell asked Judge Brett Kavanaugh a series of questions about the allegations against him. He responded "no" to all of them.