“We will get an FBI report soon. It will be made available to each senator and only senators will be allowed to look at it. That’s the way these reports are always handled. These background checks from the FBI to the Judiciary Committee. And we will be voting this week," McConnell said.

Republican Sen. Lindsey Graham of South Carolina has called for the FBI's Kavanaugh investigation to be released to the public once complete, in contrast with Democratic Sens. Chris Coons and Dianne Feinstein, who have suggested it should remain private.

“I personally want it released to the public. I want you to know what the FBI found and let the facts speak for themselves and I am ready to vote,” Graham said Tuesday.

Meanwhile, Republican Sen. John Cornyn said Tuesday that "there does need to be some sort of public statement – if not the (FBI) reports themselves," adding that the accusations had already piqued public interest.

What happens when the FBI has finished: When the FBI completes its investigation, it will send its findings to the White House, and the information will be added to Kavanaugh's background file, which is then sent to the Senate.

Only then can senators see it, and only senators and a limited number of staff have access to it.

There will likely be efforts to make the information public — especially by whichever side it helps -- but don't expect a big public report.

Graham seemed confident in Kavanaugh's nomination, saying, "I think he's gonna be just fine in terms of the vote... I think he'll be a great judge for the court."

However, Graham also warned of partisan feuding, saying, "Taking Kavanaugh down would unleash forces from the darkest side of politics in perpetuity. And if you think only one side is capable of doing this, you’re mistaken."

Senate Majority Leader Mitch McConnell says the receipt of the FBI background report on Brett Kavanaugh won't be used as a delay on the vote on the nomination.

McConnell, when asked how long he planned to give between the FBI report being sent to the Senate and when he calls for a vote, said, "It shouldn’t take long. As interesting as this all is I can’t imagine senators who want to read it won’t go over and read it."

He added, it "won’t be used as a delay I can tell you that.”

Senate Minority Leader Chuck Schumer had called for 24 hours before the vote.

The New York Times said on Tuesday that it should not have allowed a staff writer who had tweeted negatively about Brett Kavanaugh, President Trump's nominee for the Supreme Court, to report on the judge for a story published Monday.

Emily Bazelon, who is a staff writer for The New York Times Magazine and a fellow at Yale Law School, co-authored a story published on Monday about a bar fight in 1985 during which Kavanaugh was accused of throwing ice at another customer. The Times' story was based on a police report about the incident.

But Bazelon had posted a tweet in July in which she called Kavanaugh a "5th vote for a hard-right turn on voting rights and so much more that will harm the democratic process & prevent a more equal society."

That tweet drew the attention of a number of critics who contended Bazelon's opposition to Kavanaugh presented a conflict of interest for The Times. 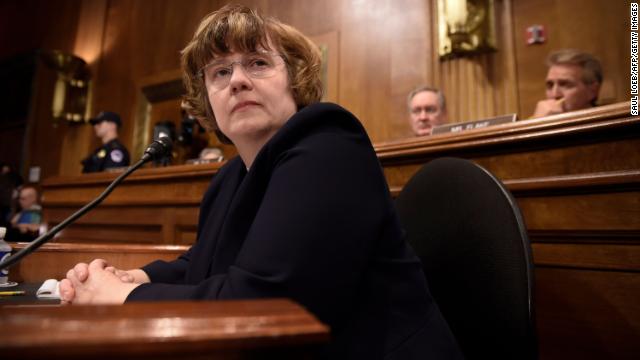 A source said she is still helping with the committee’s work on the nomination. She is still technically an employee of chairman Chuck Grassley’s and will be here likely until the nomination goes through.

Mitchell is available to help members whenever they need her — just like the rest of the Judiciary Committee team (the committee hired a bunch of additional people for the nomination, and she’s one of them.) 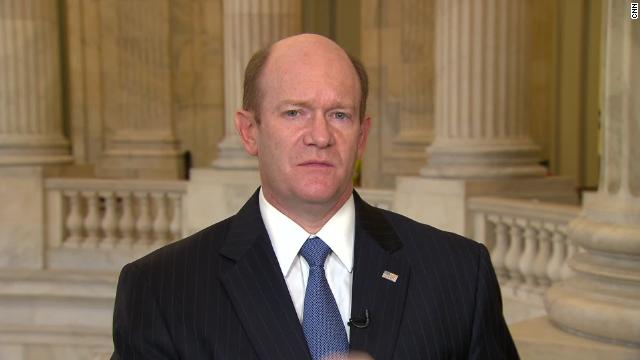 Democratic Sen. Chris Coons weighed in on the next steps of the FBI investigation into Supreme Court nominee Brett Kavanaugh, saying that the report should be kept Senate confidential so that all 100 senators can see it before they vote.

"I think that the work product of the FBI should be kept confidential to the Senate, but all senators should be able to review it," he said. "That’s typically what’s the case in any background investigation, the FBI delivers investigatory work, facts, not conclusions, and then Senators review those files, but those are committee confidential files typically."

Coons also said that Kavanaugh’s temperament on Thursday made him “very uncomfortable” and that he “crossed a line”— he viewed Kavanaugh’s outburst as “advancing a partisan view of the investigation.”

“We expect our judges, even though it may be exceptionally difficult at times, very difficult under these circumstances, to maintain a judicial temperament," he said. 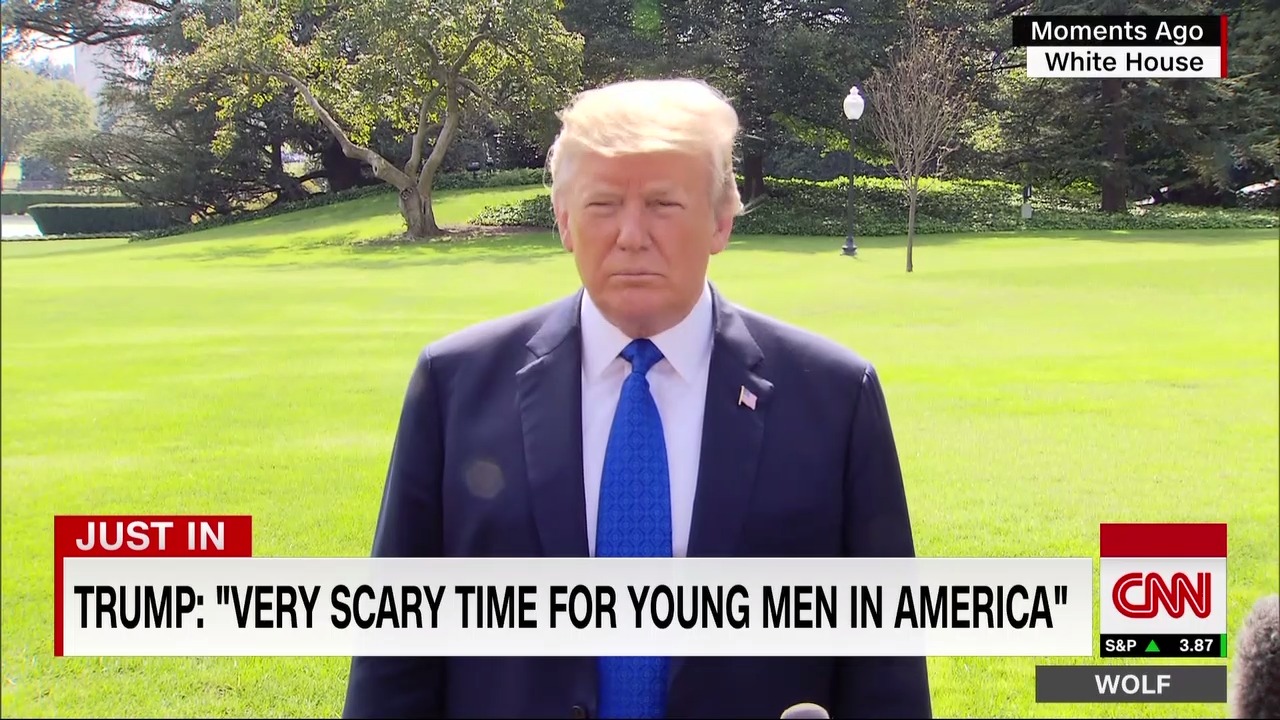 President Trump, stopping to speak to reporters while departing the White House, said that it's a "scary time in America" for young men.

Answering questions about his Supreme Court nominee Brett Kavanaugh, who is under FBI investigation after being accused of sexually assaulting a woman when they were both in high school, Trump said...

Trump's comments echoed remarks his son Donald Jr.'s made in an interview with the Daily Mail on Monday. When he was asked if he is more afraid for his sons or his daughters in the wake of the reaction to the allegations against Kavanaugh, Trump Jr. said: "I mean, right now, I'd say my sons ... When I see what's going on right now, it's scary."

Trump also made similar comments last week when he was asked about his message to young men in America.

"Somebody could come and say 30 years ago, 25 years ago, 10 years ago, 5 years ago, he did a horrible thing to me. He did this, he did that, he did that and, honestly, it's a very dangerous period in our country," Trump said during a news conference last week in New York. 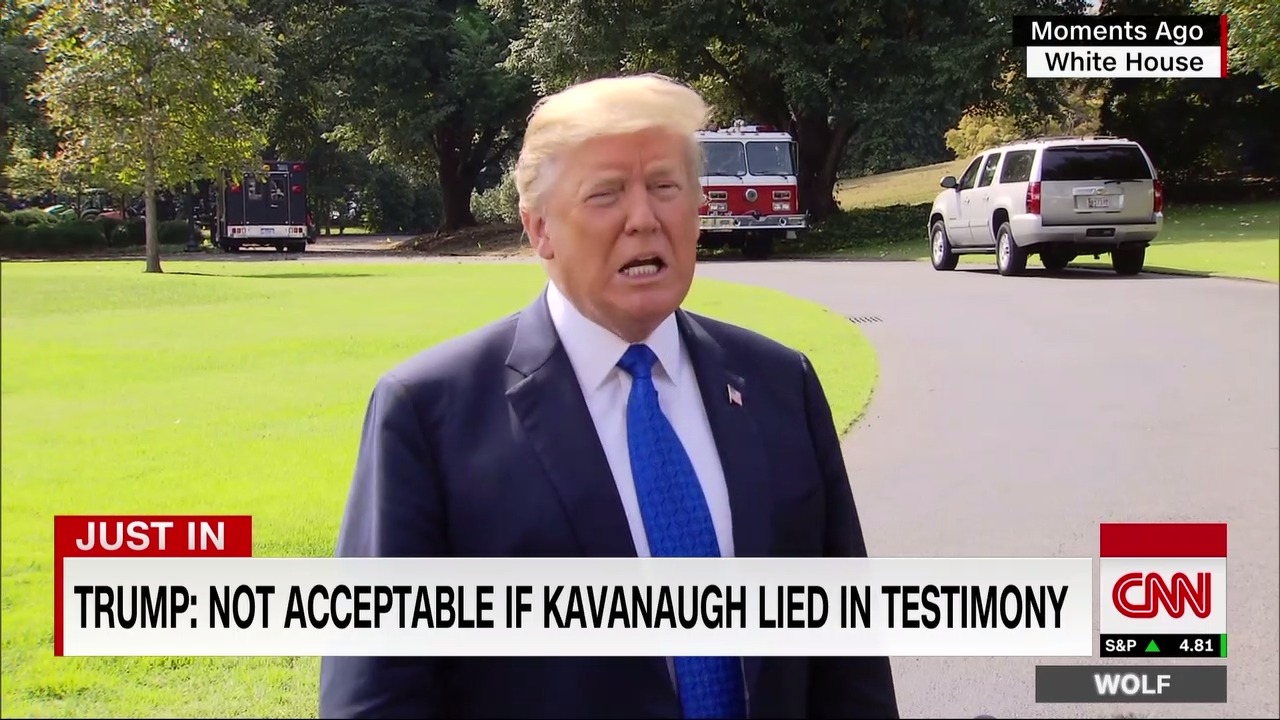 President Trump said Tuesday his Supreme Court nominee Judge Kavanaugh is "doing very well" but said his fate will depend on an ongoing FBI investigation.

"A lot is going to depend on what comes back from the FBI in terms of their additional — number 7 — investigation," he said on the South Lawn.

He added later: "The FBI is working, they’re working very hard, and let’s see what happens."

He expressed optimism a vote on Kavanaugh could come by the end of the week, citing Senate Majority Leader Mitch McConnell.

"Hopefully as Mitch said they’ll have a vote by the end of the week and it will be a positive vote," he said.

Kavanaugh, he said, is "fighting very hard for his reputation, for his family."

Speaking to reporters on the South Lawn, Trump also drew a line on lying to Congress.

"I don’t think you should lie to Congress and there are a lot of people over the past year who have lied to Congress," he said. "For me, that would not be acceptable."

CNN’s Manu Raju just asked Senator Lisa Murkowski if she would be ready to vote if FBI report not done by Friday.

"I don’t know what the status of the FBI report and I think what we need to do is wait for the FBI to conclude its report," she answered.

A protestor then intruded on gaggle, and she escaped onto an awaiting senators-only elevator where none other than Senator Susan Collins was on.