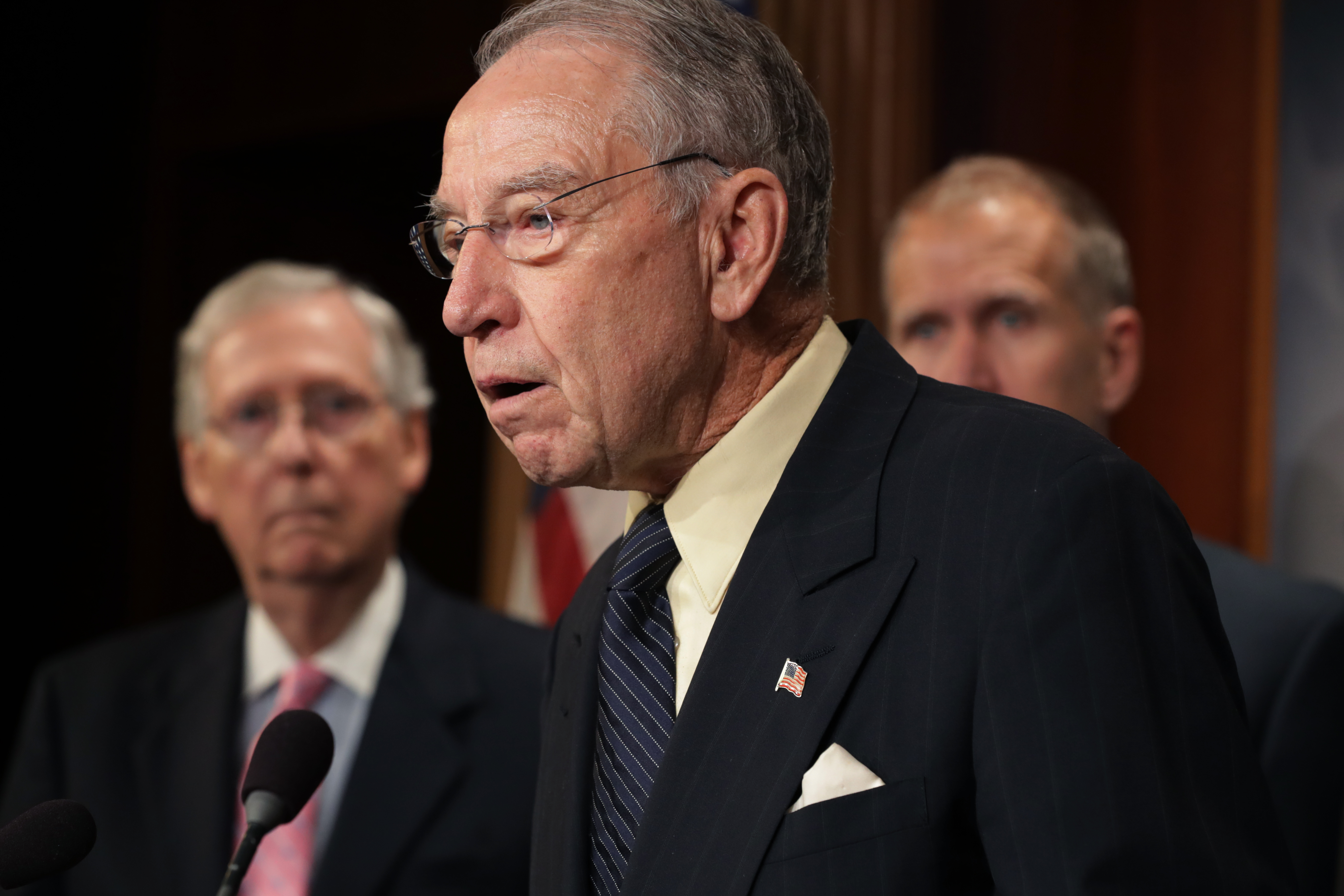 Grassley compared Collins to the late Sen. Margaret Chase Smith of Maine, who gave a now-famous 1950 speech, and who Grassley called "trailblazing."

"I commend Sen Collins for her thoughtfulness and am proud to have her support for such a well qualified nominee," Grassley wrote. 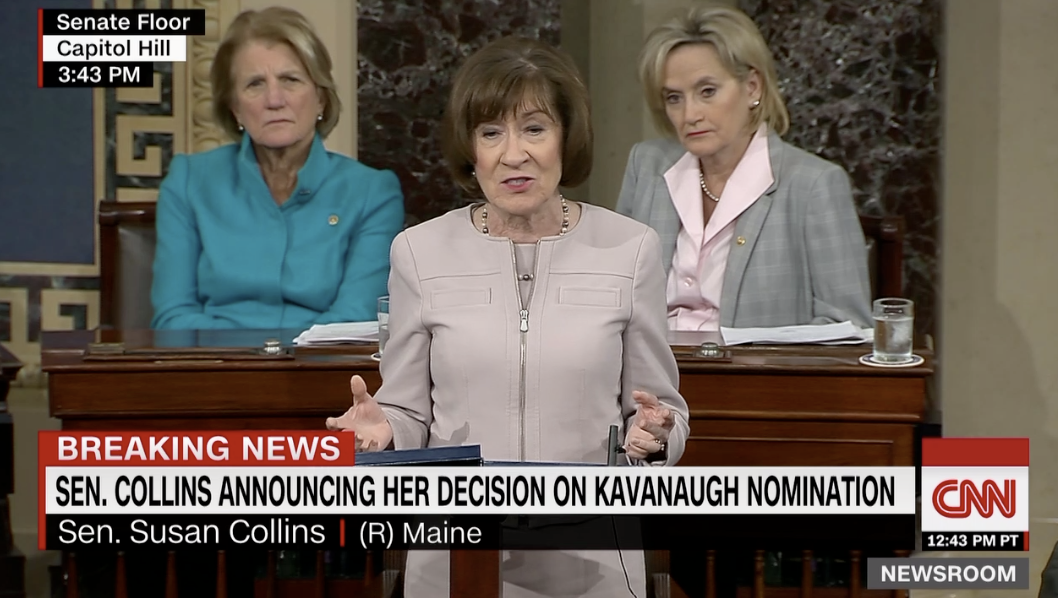 Republican Sen. Susan Collins just announced that she was supporting Brett Kavanaugh's confirmation after delivering a 45-minute speech before her colleagues on the Senate floor.

Here are a few key quotes from her speech: 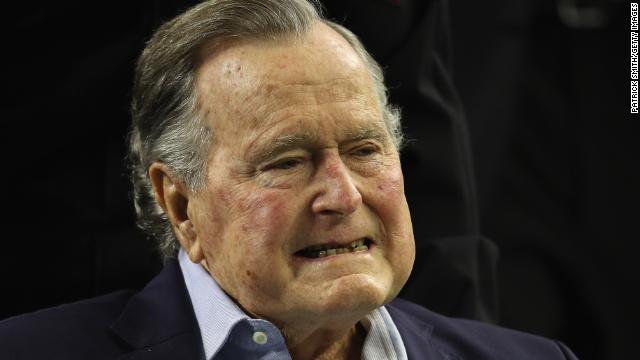 "Those of us who’ve been in the Chamber today have had a unique opportunity to listen to a great statesman from Maine once again talk about this institution, how it ought to treat matters like this, and that she’s given us the opportunity to think about how we can rise above the depths to which we’ve sunk during this process." McConnell said.

"I want to thank the senator from Maine. I’ve not heard a better speech in my time here and I’ve been here awhile. It was absolutely inspirational."

Individual voices in the crowd could be heard crying out, "Shame on you!" and "What is wrong with you?"

Manchin spoke with his eyes averted, to which the crowd responded by changing their chant to "Look at us, look at us!"

With both Collins and Manchin now voting yes, Kavanaugh is expected to have the support to be confirmed when a final vote takes place Saturday.

A handful of Democrats, including Sen. Dick Durbin, sat solemnly during the speech.

When Collins concluded, her Republican colleagues stood and applauded her.

McConnell went to hug her, followed by the rest of the Republicans in the chamber.

She and Sen. Chuck Grassley hugged for several seconds when he came to greet her. 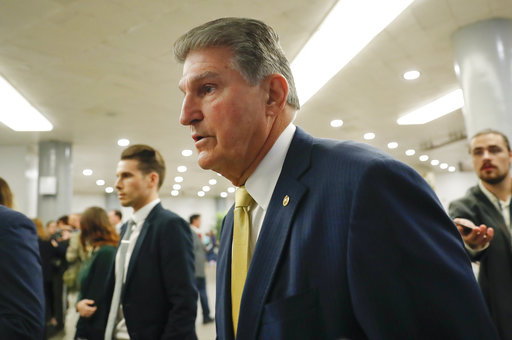 "I have reservations about this vote given the serious accusations against Judge Kavanaugh and the temperament he displayed in the hearing," Manchin wrote, expressing sympathy for sexual assault survivors.

"However, based on all of the information I have available to me, including the recently completed FBI report, I have found Judge Kavanaugh to be a qualified jurist who will follow the Constitution and determine cases based on the legal findings before him."

"That is why I voted to confirm Judge Kavanaugh’s nomination to serve on the Supreme Court because I believe he will rule in a manner that is consistent with our Constitution.” 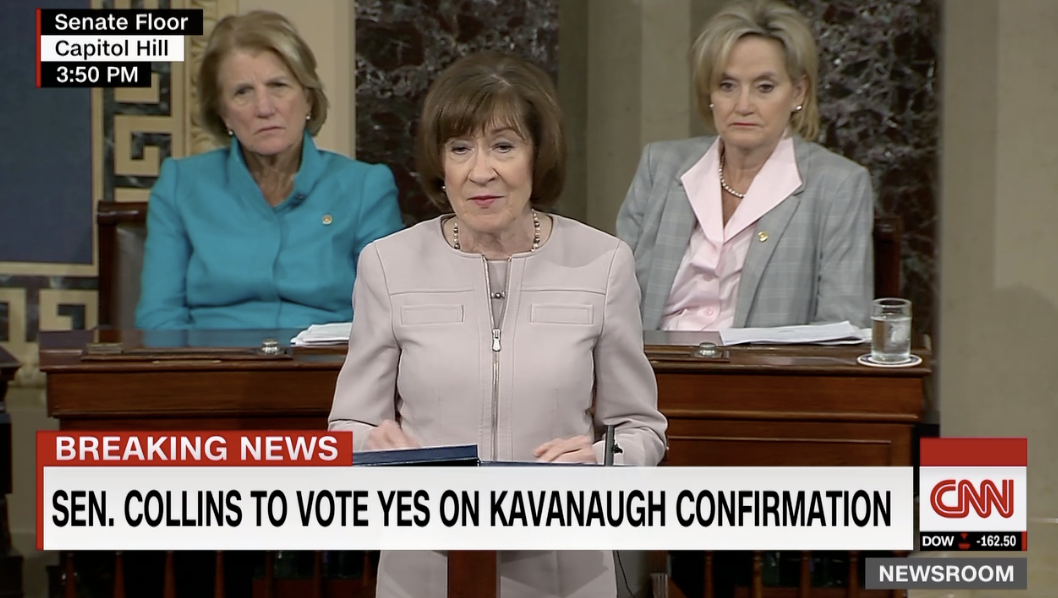 "Despite the turbulent, bitter fight surrounding his nomination, my fervent hope is that Brett Kavanaugh will work to lessen the divisions in the Supreme Court so that we have far fewer 5-4 decisions and so that public confidence in our judiciary and our highest court is restored," she said.

Her announcement essentially secures that the judge has enough support to be confirmed when a final vote takes place Saturday.

Before announcing her decision, Collins explained her past voting record for Supreme Court justices in a 45-minute speech.

The Maine Republican said she voted to advance Supreme Court justice nominations under both Republican and Democratic presidents.

"I believe that she is a survivor of a sexual assault and that this trauma has upended her life," Collins said. However, she then stressed that Ford's allegations could not be corroborated.

"The four witnesses she (Ford) named could not corroborate any of the events of that evening gathering where she says the assault occurred. None of the individuals professor Ford says were at the party has any recollection at all of the night," Collins said, pointing out that Ford could not remember how she got home and questioning why Ford's friends had not called the next day.

She also called allegations against Kavanaugh of gang rape "outlandish," and said they "illustrate why the presumption of innocence is so important."

In the same breath, however, she expressed support for survivors of sexual assault. "The #MeToo movement is real," she declared. "It matters. It is needed and it is long overdue."

"We must listen to survivors, and every day we must seek to stop the criminal behavior that has hurt so many. We owe this to ourselves, our children and generations to come."