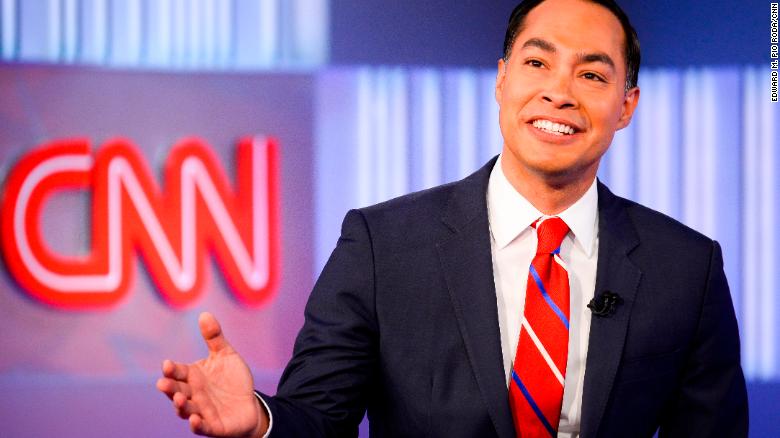 Democratic presidential candidate Julián Castro said he supports the legalization of marijuana, and would also move to expunge criminal records for anyone imprisoned because of marijuana.

"I actually support the legalization of marijuana," he said.

Castro said he would back "a well regulated, legalized system of marijuana," which already exists in Colorado and other states.

He went on to address marijuana convictions.

"On top of that we need to go back and expunge the records of people who were imprisoned because of using marijuana. And this is important. This part is important, in part, because there are a lot of people, and folks in this audience probably know some of them who have served jail time, right, and disproportionately it's impacted communities of color and poor neighborhoods of people who have been imprisoned because of marijuana use. So it's not enough just to say we want to legalize it. We actually want to go back and expunge these records. And we need to make sure that we take and we want to take the best practices of states like Colorado and other places that have legalized so that in the future states that do it afterward can get the best of that knowledge and not hit as many bumps in the road as some places have hit before," he said.

Castro's answer came after a light-hearted moment with special education teacher Aaron Stone, who asked about his position about legalizing the recreational use of marijuana for adults.

"It's all right, man, look, your last name is Stone; I won't assume you're a stoner. My last name is Castro; don't assume I'm a dictator," the former San Antonio mayor said. 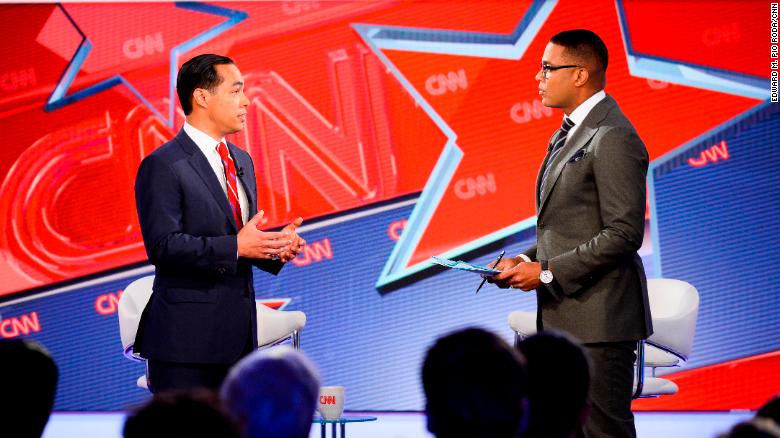 If Julián Castro got a chance to deliver a piece of advice to President Trump, he said he would tell him: "Follow the law."

Castro elaborated on his answer, saying that Trump needs to respect Congress and the courts.

"You know, for any other president that might sound like a joke, right, but look what this President has tried to do. Declaring a national emergency so that he can get his wall funding. I believe it's against the law. The way that he has moved forward on a number of different policies. What they're talking about today, just the news that people are seeing tonight, the breaking news about trying to get undocumented immigrants shipped into communities where political opponents represent. You know, I would tell this President that he is not above the law, that he needs to follow the law and understand that our constitution created three, co-equal branches so that he should respect Congress and respect the courts and I think that's going to make for a better nation if he did that." 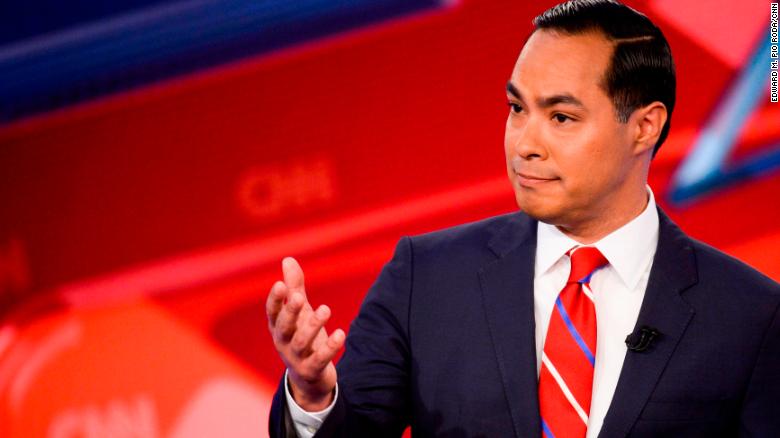 Former Housing and Urban Development Secretary Julian Castro defended his support on paying reparations to African American families whose ancestors were slaves by arguing that the United States has “never fully addressed in this country the original sin of slavery.”

“Because of that we have never truly healed as a country,” Castro said. “If we compensate people under our constitution, if we take their property why wouldn’t you compensate people who actually were considered property and sanctioned as property by the state?”

Castro went on to say that he supports legislation from Rep. Sheila Jackson Lee that would appoint a commission to determine how reparations would be paid.

Reparations have become one of the many policy issues debated during the 2020 nomination process, with Sens. Elizabeth Warren and Kamala Harris indicating that they are somewhat supportive of reparations. Most candidates have said they are supportive of the Lee bill that would study the issue. 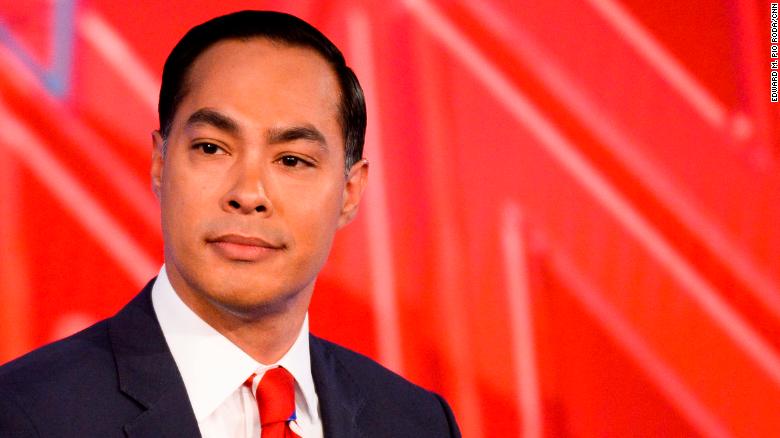 The one thing former Housing and Urban Development Secretary Julián Castro said he learned in the Obama administration is integrity.

"We need to restore integrity to the White House," he said.

Castro went on to praise former President Barack Obama and his family for leading with "grace and class."

"President Obama was somebody that so many people look up to as a role model. And he and first lady Michelle Obama and their children led with such grace and class and we miss that these days. In terms of something that I learned that I think, you know, we can take next time when we have a Democratic administration it would be probably to be bold about implementing the kind of changes that we need," he said.

Former Housing and Urban Development Secretary Julián Castro said Thursday that he believes presidential candidates should be required by law to release their taxes in order to ascend to the presidency.

“I support making a requirement by statute. Congress passing a law that requires people who are running for president to submit 10 years of their tax returns,” Castro said. “It is astonishing that this President still has not released his taxes, even though he said, at one point, that he would.”

Castro went on to say that he hoped congressional Democrats, who are looking to get a hold of Trump’s taxes, are successful.

“I hope they get them because it is clear that he has something to hide. I don't," Castro said. “So during the next few weeks I look forward to releasing 10 years of my tax returns.”

Trump declining to release his tax returns had made the issue key in the 2020 Democratic nomination process, with a series of candidates either releasing or pledging to release their taxes. 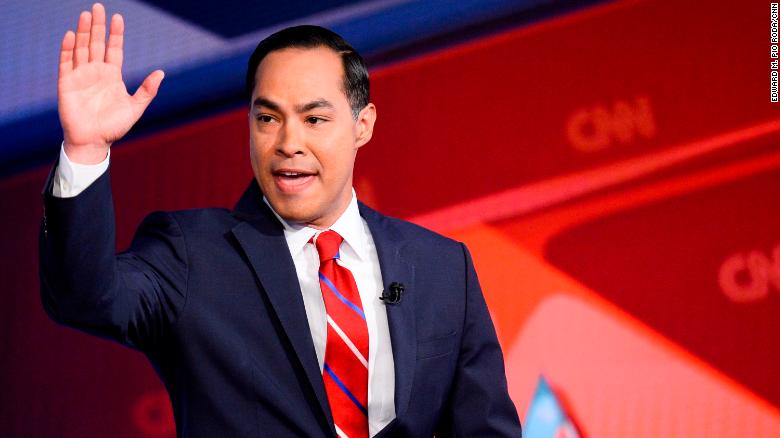 Former Housing and Urban Development Secretary Julián Castro rebuffed President Trump’s immigration rhetoric, arguing that the country can “have a secure border” and “maintain that security,” while also being compassionate.

Trump’s immigration message became an anchor of his 2016 campaign and, since winning, the President has continually upped his immigration rhetoric and demanded that the federal government fund a wall along the U.S.-Mexico border.

“This President wants us to believe that we have to choose between border security,” Castro said. “I believe that are border as more secure than it’s ever been. … We can have a secure border and we can maintain that security. We can be compassionate as well.”

He added: “Let’s live up to the best of ourselves by recognizing these human beings deserve respect.”

Castro unveiled an extensive immigration plan earlier this month that would roll back a series of laws implemented under Presidents George W. Bush and Donald Trump. Castro was the first candidate in the crowded 2020 Democratic field to unveil a detailed immigration plan, putting him out in front on an issue that Trump made central to his 2016 campaign and plans to again champion in his re-election bid. 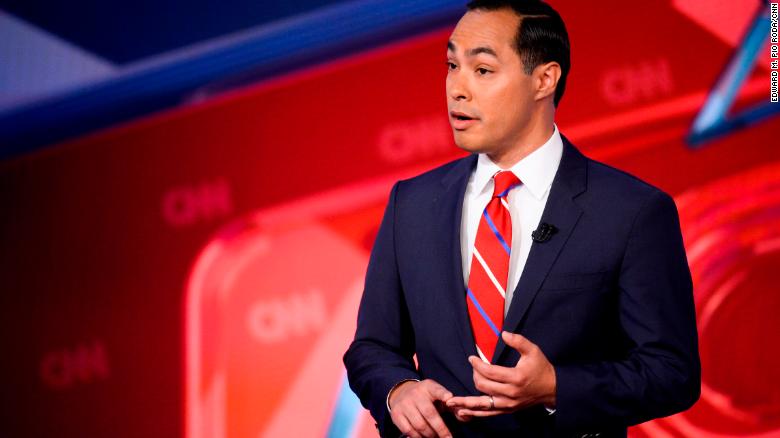 Democratic presidential candidate Julián Castro just walked on stage at his CNN town hall and was asked about a new report that the White House pressured ICE to move detained, undocumented immigrants from the US-Mexico border to sanctuary cities or top Democrats' districts in part to retaliate against Democrats who oppose President Donald Trump's plans for a border wall.

"That the cruelty of this administration never seems to end. You know, a year ago this administration told us that as Americans if we would just be cruel enough to separate little children from their parents that that would deter more families from coming to our southern border. And, in fact, the opposite has happened. And so it's amazing what lengths they're going to. Now they're talking about bussing families to particular cities to target political opponents. You know, these folks want us to choose cruelty as a weapon against these people and against political opponents and last week I released an immigration plan. I'm calling on Americans to choose compassion, not cruelty."

We asked him 10 simple questions so voters can get to know him better.

Castro: "I think that one thing hardly anybody knows about me is I am the only person that you are going to meet that actually mixes Equal and Sweet'N Low and so I am going to die twice as fast."

Castro: "The best piece of advice I ever received is to believe in myself. My mom always made sure that my brother and I believed in ourselves."

Castro: "Probably my favorite movie was 'The Breakfast Club' from the 1980s because it was just a fun movie at that time. I was just an 11-year-old kid to watch it. Every time I see it on TV, I have to stop and watch."

Castro: "The last book I read was 'The Road to Camelot' and I am actually still reading it right now about a 1960 presidential election. I am also reading Harry Potter books because my daughter is 10 years old."

Castro: "There is so much that our country has to tackle right now — making sure that everybody has health care in our country, ensuring that everybody has good job opportunities so they can reach their dreams and also making sure that we continue to improve our education system so that people can get the skills and the knowledge they need to compete in the 21st century economy."

CNN: What is the one thing we need to do about climate change immediately?

Castro: "We need to recommit ourselves to the Paris Climate Accord, so that America can lead again when it comes to climate change."

Castro: "I am one of the few that candidates that actually has executive experience. As a former Cabinet secretary, I was in charge of a department with a $48 billion budget, 54 field offices, 8,000 employees and as the mayor of the seventh-largest city of the United States."

CNN: Is there anything you wish you could tell voters that you never get asked?

Castro: "You know, I can't think of anything. I have gotten asked so many questions. You know nothing comes to the top of my head. Well one thing comes to my head: the real way to tell my brother and me apart is that we're twins, but only one of us has actually had a perm — and it wasn't me. My brother likes to go around, telling people that the way to tell us apart is that I am a minute uglier than him. Don't believe him. He grew a beard for a month recently. But when he realized he didn't look enough like me and his approval ratings were plummeting, he shaved the beard off, so."

CNN: What does a Castro presidency have to offer Republican voters?

Castro: "I'd like to restore a presidency that's trying to bring the country together, restore integrity and honesty to the White House, be a president for everybody, not just people who agree with me and also be a president that looks to the future and not that past."

The centerpiece of Julián Castro's plan provides a path to citizenship for "undocumented individuals and families who do not have a current pathway to legal status, but who live, work and raise families in communities throughout the United States," his campaign said in a release.

Castro, if elected president, said he would increase refugee admissions, reunify families that have been separated at the border and allow deported veterans who served in the US military to return to the United States.

Why this matters: Castro's plan is the polar opposite to what President Trump has offered the United States and politically positions him as a Democratic leader on immigration.

Castro said he would repeal Section 1325 of the Immigration and Nationality Act, which was used by the George W. Bush administration to apply a criminal violation — as opposed to a civil infraction — to anyone entering the United States illegally.