Our live coverage has ended for the day. Read more on Biden's news conference here.

President Biden admitted that the US should have done more testing for Covid-19 earlier in the pandemic, but stressed that his administration is "doing more now."

"Look, we're also increasing testing. Should we have done more testing earlier? Yes. But we're doing more now," he said while describing his administration's pandemic response during today's news conference. "We've gone from zero at-home tests a year ago to 375 million tests on the market in just this month."

President Biden discussed the challenges his administration and the country has faced because of the coronavirus pandemic during his first year in office in remarks from the White House.

"I know there's a lot of frustration and fatigue in this country. And we know why, Covid-19. Omicron has now been challenging us in a way that it's the new enemy," Biden said.

"But while it's caused for concern, it's not cause for panic. We've been doing everything we can, learning and adapting as fast as we can and preparing for future beyond the pandemic," he said.

"We're in a very different place now, though. We have the tools. Vaccines. boosters, masks, tests, pills to save lives and keep businesses and schools open. Seventy-five percent of adults are fully vaccinated. We've gone from 90 million adults with no shots in arms last summer and down to 35 million with no shots as of today. And we're adding about 9 million more vaccinations each week. We're going to stick with our vaccination efforts because vaccinations work. So get vaccinated, please. And get your booster," the President said.

President Biden was just asked about the ongoing Covid-19 surge and his administration's pandemic response.

Here's a look at the latest US figures on cases, vaccinations and hospitalizations:

Here's a look at how Covid-19 cases have changed over time, according to JHU data: 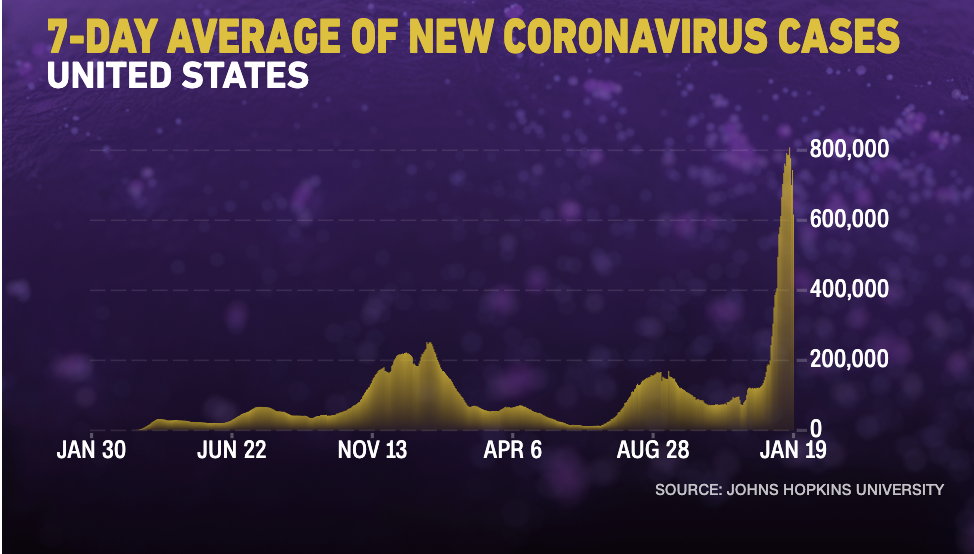 President Biden said one of the keys to facing down inflation in the US is to promote healthy competition within various industries.

"A handful of giant companies dominate the market in sectors like meat processing, railroads, shipping, and other areas... Over time, it has reduced competition, squeezed out small businesses and farmers, ranchers and increased the price for consumers," Biden said during a live news conference marking his first full year in office.

"Look, I'm a capitalist. But capitalism without competition is not capitalism. It's exploitation," he said.

Biden continued by saying that recent times in America have been as tough as any seen in recent memory.

Noting that he, as President, needs to "finish the job" of getting Covid-19 under control, Biden closed with a message of positivity and optimism.

"I've long said it's never been a good bet to bet against the American people or America. I believe that more than ever today. We've seen the grit and determination of the American people this past year," he said, adding, "The best days of this country are still ahead of us, not behind us."

President Biden opened his news conference commemorating his first year in office by admitting that it's been a year "of challenges" but also of considerable strides, including the vaccination of millions of Americans against Covid-19.

"Tomorrow will mark one year since I took office. It's been a year of challenges, but it's also been a year of enormous progress. We went from 2 million people being vaccinated at the moment I was sworn in to 210 million Americans being fully vaccinated today," Biden said from the White House Wednesday afternoon.

Biden also used his opening remarks to highlight the number of jobs created under his watch.

"We created 6 million new jobs. More jobs in one year than any time before. Unemployment dropped. The unemployment rate dropped to 3.9%. Child poverty dropped by nearly 40%," the President added.

On the pandemic: Biden's remarks come as his administration will make 400 million N95 masks available to Americans for free starting next week, a White House official told CNN.

The US government launched a website for Americans to sign up for free Covid-19 tests as the country continues to battle the Omicron variant — which caused 99.5% of new coronavirus cases in the US last week, according to CDC estimates.

President Biden is holding a formal news conference from the White House as he marks the end of his first full year in office.

Biden is fielding questions from reporters as his administration's struggles to contain the latest surge of the Omicron variant and works to ease the economic anxiety gripping the nation.

The President is entering his second year in office — a midterm election year — after facing a number of recent setbacks. The centerpiece of his economic agenda has hit a roadblock in Congress, it is unclear whether the Democrats' push for voting rights legislation will go anywhere, the Supreme Court struck down Biden's vaccine mandates for big businesses and recent key economic indicators show record inflation.

The President regularly fields questions from reporters after delivering remarks and during departures and arrivals at the White House, but he hasn't held as many formal news conferences as his recent predecessors.

In his first year in office, Biden held nine total news conferences — six solo and three joint ones — according to data tracked by The American Presidency Project at the University of California, Santa Barbara. The last time he held a formal news conference was at the COP26 climate summit in Glasgow, Scotland, in November.

President Biden will open his news conference today touting “remarkable progress” on vaccinations, reopening the economy, creating jobs and lowering unemployment, a White House official said, but will also acknowledged the challenges facing his administration as he enters his second year in office.

“The President knows there’s more work to do,” an administration official said. “So he’s also going to level with the American people about the challenges we still face – especially when it comes to Covid-19 and higher prices – and the actions he’s taking to tackle them.”

Higher prices, of course, is inflation – but notably not the word used by the administration official.

We will see how the President describes during the news conference.

"Next Wednesday, the President will hold a formal press conference at 4:00 p.m. in the afternoon," Psaki told reporters at the press briefing, adding, "the President looks forward to speaking directly to the American people."

Though Biden has fielded questions from the press informally following remarks and during departures and arrivals at the White House, he has not held a formal press conference since he addressed reporters at the COP26 climate summit in Glasgow, Scotland, on Nov. 2, 2021.

Biden held nine total press conferences, including six solo and three joint press conferences with other world leaders, in his first year in office, according to data tracked by the American Presidency Project at the University of California at Santa Barbara.

Early in his term, President Biden told the country that he had been elected to solve problems. As he marks the anniversary of his inauguration with a news conference today, there are growing doubts over whether he can fulfill this theory of his own presidency.

The White House appears increasingly beset by the extreme nature of the challenges Biden faces at home and abroad, undermined by some of its own strategic decisions and limited by tiny congressional majorities. The administration bet on vaccines ending the pandemic by now, but inoculations became politicized and millions of Americans chose not to get their shots, while viral variants have helped prolong the emergency.

The sense of a beleaguered presidency was underscored by a volley of blows last week, including the torpedoing of Biden's voting rights push by two moderate Democratic senators in a hit to his authority, and the Supreme Court's striking down of vaccine and test requirements for large firms, a centerpiece of his pandemic strategy.

The dual setbacks come with Biden's signature social spending and climate change legislation also stalled— like the voting rights bills — because moderate Democratic Senators Joe Manchin of West Virginia and Kyrsten Sinema of Arizona refuse to get on board.

Biden ended the week accused by critics of undermining his own inaugural vow to pursue national unity after comparing opponents of voting rights reform to segregationists. In a symbol of administration futility, the public holiday marking Martin Luther King Jr. Day on Monday also stood as a blown deadline set by Senate Democrats to enshrine voting rights bills into law. Senate votes on the measures — and the rules changes needed to pass them — are certain to fail unless Sinema and Manchin change their minds, only underscoring the narrative of stalemate.