Our live coverage of Joe Biden’s town hall has ended. Scroll through the posts below to see how it unfolded. 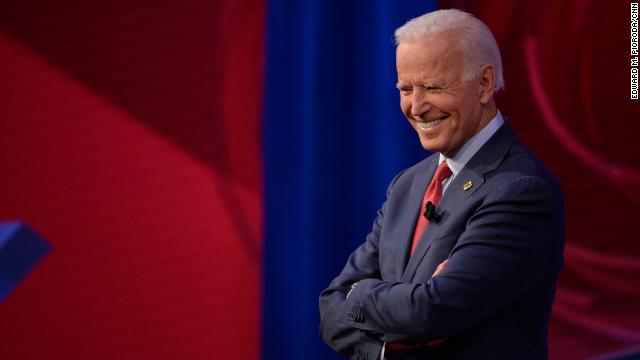 In case you missed it, here are five key quotes from the event:

Former Vice President Joe Biden listed the Violence Against Women Act, a comprehensive health care plan and a nuclear arms control agreement with Russia as some of the changes he's most proudest of.

"So there's a lot of things that I've done that I'm very, very proud of. And I think we'll have long-term consequences of what needs to be done," he said.

"We can get it done. It will be hard as the devil. It may take more than four years for some of it, but we can get it done by driving it home to the American people and letting them know what we are for. Everybody knows who Donald Trump is. We got to let them know who we are, who we are. We choose science over fiction. We choose hope over fear. We choose truth over lies," he said. 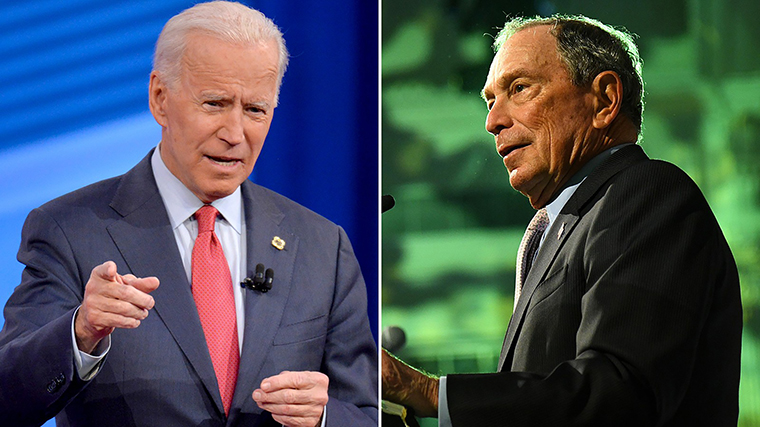 Joe Biden called former New York City Mayor Michael Bloomberg a “talented man” who can “be engaged as long as he wants” if he launches a presidential bid.

“Look, I just think that we'll see. I mean, Michael is a talented man, has a little bit of money, and can be engaged as long as he wants,” Biden said when asked about the billionaire, who has laid the groundwork for a possible 2020 bid.

The former Vice President said he would leave it to “the prognosticators to, you know, psych out what is good politics, bad politics” but emphasized the importance of focusing on early voting states.

“I just think that the way the system is set up now, there are four gates you have to get through to get to Super Tuesday and on, and they are: Iowa caucus, New Hampshire primary, Nevada caucus and South Carolina primary,” Biden said.

“I just think it's the way it's been, and we'll see what happens. But that's a judgment he has to make,” Biden said.

Bloomberg, after saying in March that he wouldn't run for president, is backtracking and preparing a potential run for a 2020 bid, a spokesman for the billionaire told CNN. Bloomberg has not made a final decision on a run, the spokesperson said. 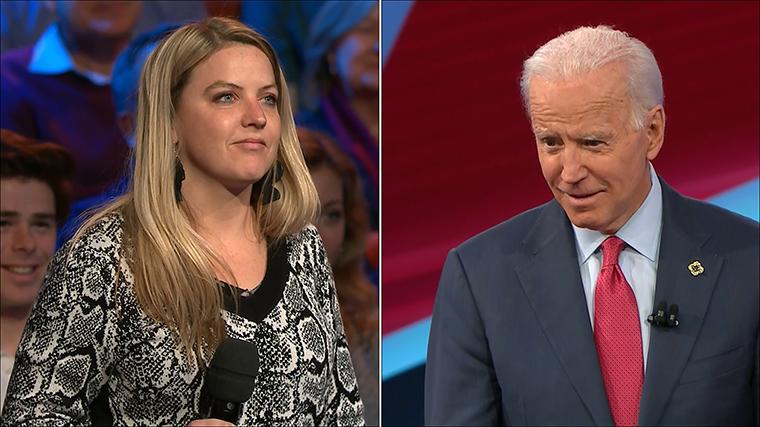 Asked how he planned to help veterans who were deported to their native country, former Vice President Joe Biden said he would, "Bring them back."

Biden said he and his wife swore in 120 soldiers and sailors and "none of whom were American citizens, all who had volunteered from silver stars to bronze stars to Purple Hearts."

"And you should have seen the looks in their faces as each one of them came up," he said.

Biden continued: "That's why we're who we are, the country we are. We are a country of immigrants, and they serve, and they should be treated the same way." 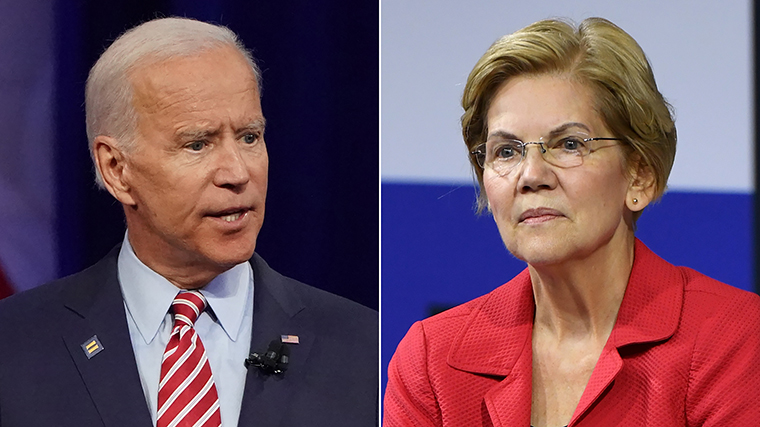 Joe Biden defended characterizing Massachusetts Sen. Elizabeth Warren as angry and elitist, saying Monday that he was responding after “she attacked me.”

He was referring to Warren jabbing at him for his opposition to “Medicare for All,” suggesting without naming the former vice president that he is running in the wrong party’s presidential primary. Biden has escalated his criticism of Warren over that comment in recent days.

Biden said what he’s been calling elitist was “the attitude that we know better than ordinary people what’s in their interests. ‘I know more than you, let me tell you what to do.’” In a Medium post, Biden wrote that Warren, without naming her, was “condescending” and “representative of an elitism that working and middle class people do not share.”

“The attitude is elitist that people can’t make up their own mind. You like your health insurance,” Biden said.

He then began to mimic "Medicare for All" advocates: “‘But you shouldn’t like your health insurance, you should have to give that up. I’m going to demand you not have that. We’re going to give you something better.’”

He added: “I resent that. And I wasn’t talking about her, I was talking about the attitude that if you don’t agree with me, get in the other party.”

Joe Biden, former vice president and Democratic presidential hopeful, opened up Monday night about the deep losses he has suffered.

Biden's wife and infant daughter died in a car crash in 1972 and his sons were injured. His son, Beau, died to brain cancer four years ago.

Asked what it meant to have people take comfort in sharing some of deep personal tragedies with him, Biden said, "Well, you know, I have -- a lot of people have suffered more than I have as loss, and I have been really -- sounds bizarre to say -- lucky in the sense that I had an incredible family."

He went on to explain how his family stepped up to help him raise his children:

"When you're the recipient of someone's understanding and empathy, you understand how it can help and it's just impossible, although sometimes it's hard to not share it with others. When people come up to me often, as you've observed is they come up and they'll walk up to me and all of a sudden a man or woman will just grab me and hug me and say I just lost my son, lost my daughter, tell me, am I going to be OK, am I going to be OK?"

Biden said the best way to overcome tragedy is to find purpose in life.

"Purpose. And a purpose is best utilized if it relates to something that related to what the person you lost cared about," he said.

He continued: "There will come a time if anybody of you are going through it where the thought of the person you lost will bring a smile to your lip before it brings a tear to your eye. That's when you know you're going to be able to make it. That's when you know. But it's hard. It's hard. It gives me some -- it gives me some sense of purpose when I'm able to be of some help."

Former Vice President Joe Biden repeated his belief that Republicans will be more willing to work with Democrats if President Donald Trump loses the 2020 election.

But he also offered a contradictory example -- one that showed, as Biden’s Democratic rivals have frequently pointed out, that GOP lawmakers refused to cooperate with Democrats well before Trump became the party’s standard-bearer.

Biden pointed to former President Barack Obama’s nomination of Merrick Garland for the Supreme Court in March 2016. Senate Republicans refused to give Garland a hearing.

“I called 12 Republicans and said, ‘What are you doing?’ Biden said. “I said, ‘You realize what you’re doing to the Constitution?’ They said, ‘We know, Joe, but here’s the deal: Joe, I’m in a state where if in fact the Koch brothers drop in $10, $12 million, I will lose the primary.’”

Biden didn’t explain why, if Republicans had been unbending before Trump due to concerns that they’d anger their conservative base, they’d be more willing to work with Democrats after his departure.

Still, he said, “I honest to God believe, with Trump out of the way, you’re going to find people screwing up a lot more courage than they had before to say, ‘OK, OK, I can move now, I have more leeway.’”

Former Vice President Joe Biden explained Monday night why politics are so different now from when he was young senator in Congress.

Biden was 29 when he was elected to Congress -- when Richard Nixon was president.

"Politics today has gotten so mean and ugly and dirty and everybody questioning motive and not focusing at all on trying to put things together, instead of disagreeing on substance you go to motive," he said.

Biden went on to say it has become difficult for Republicans to stand up and take on President Trump, "even if they think he should be taken on because he has such vitriol."

"The politics has gotten just so out of whack. But it's going to come back in whack, this guy," he said.