Pete Buttigieg pointed to his own military experience and slammed Donald Trump over his bone spurs diagnosis as he argued he is prepared to take on the President.

Buttigieg said if Trump tried “tough talk” on the military during a debate with the former South Bend, Indiana, mayor, he would have to do so while “standing next to an American war veteran and explain how he pretended bone spurs made him ineligible to serve.”

The line came near the end of the debate, when Buttigieg turned a barb from businessman Tom Steyer to take on the Republican president.

Trump was diagnosed with bone spurs in his heels at the age of 22 in 1968, seven years before the Vietnam War ended. The diagnosis earned him a 1-Y medical deferment, meaning he was barred from military service in the same year that roughly 300,000 troops were enlisted into the military.

Buttigieg attacked the President on other topics, too.

“I am ready to take on this president on the economy because I am from the exact kind of industrial Midwestern community he pretends to speak to and has proven to turn his back on,” Buttigieg said.

The mayor also hit Trump on religion. The mayor is an Episcopalian. Trump, a Presbyterian, enjoyed widespread support from white American evangelicals during the 2016 election.

Businessman Tom Steyer, who spent more than $100 million dollars on television ads, was asked how he plans to convince voters that he's more than just his money.

Steyer said it's simple; he's going to focus on the economy just like President Trump

"Look, we know how Donald Trump is going to run for president. He's going to run on the economy. He's already told Americans last month in Florida you don't like me, and I don't like you. But you're all going to vote for me because the Democrats are going to destroy the economy in 15 minutes if they get in control," he said.

Steyer went on to defend his wealth, saying that he started his business on his own.

"I didn't inherit a penny from my parents," he said.

Pete Buttigieg defended his lack of support among black voters on Tuesday, arguing that he isn’t “perfect” on all issues that matter for African American voters.

Still, he noted that “the black voters that know me best are supporting me," pointing to the support he has in his hometown, South Bend, Indiana.

Buttigieg’s lack of black support has been a persistent problem for the former South Bend mayor, one that he first acknowledged in 2019 but has largely failed to address for much of his campaign.

“The biggest mistake we can make is take black votes for granted. I never will,” Buttigieg said. “The reason I have the support I do is not because any voter thinks I’m perfect, it's because of the work that we have done facing some of the toughest issues that communities can, not from the luxury of a debate or a television panel or committee room, but on the ground.”

Buttigieg went on to say that “of course there is a much longer way to go in my community and around the country” on issues of race, he will “be a president whose personal commitment is to continue doing this work.”

Buttigieg’s inability to win over black voters has been particularly noteworthy in South Carolina, where a large part of the primary is expected to made up of black voters. That is why Buttigieg’s campaign is banking on a win in Iowa or New Hampshire to propel him into Nevada and South Carolina -- the campaign believes black voters could move his way if he proves he can win.

"I've been the object of his affection now more than anybody else on the stage. I've taken all the hits he can deliver, and I'm getting better in the polls," Biden said.

He responded to CNN's Abby Phillip, who pointed out that Trump frequently mocks his opponents. Biden said he's "prepared" for that.

"I have support across the board and I'm not worried about taking on Donald Trump at all," Biden said.

Vermont Sen. Bernie Sanders repeated his claim that the North American Free Trade Agreement and permanent normal trade relations with China have cost the US “some 4 million jobs.”

“I am sick and tired,” said Sanders as he drew a contrast with former Vice President Joe Biden, pointing to large multinational corporations that he says have reaped the benefits.

Facts First: This is likely an overestimate of the impact trade agreements can have on the country’s employment.

It’s difficult to measure the overall economic impact of the NAFTA since trade and investment trends can be affected by a number of factors, including economic growth, inflation and even a weakening dollar, according to the Congressional Research Service.

Most estimates find that NAFTA had little, if any, impact on national employment levels, though the effect was uneven across regions and industries.

The left-leaning Economic Policy Institute found that between 1993 and 2013, the US trade deficit with Mexico and Canada increased from $17 billion to $177.2 billion and displaced 851,700 US jobs.

By contrast, the entry of China into the World Trade Organization in 2001 likely had a much larger impact because of sudden competition from cheaper imports. But even the high end of job loss estimates from EPI found that the change in trade status for China caused a loss of 3.4 million jobs between 2001 and 2017.

Another estimate, from a 2016 study by economists at the Massachusetts Institute of Technology, found that normalizing trade relations with China cost the US between 2 million and 2.4 million jobs between 1999 and 2011.

Billionaire businessman Tom Steyer said tonight he would declare a state of emergency on his first day if elected president.

"I'm still shocked that I'm the only person on the stage who will say this. I would declare a state of emergency on day one on climate," he said. "I would do for the standpoint of environmental justice and make sure we go to the black and brown communities where you can't breathe the air or drink the water out of the tap."

Steyer went on to say his plan would create millions of jobs.

"It's going to be the biggest job program in American history. So I know we have to do it and I know we can do it. I know that we can do it in way that makes us healthier. That makes us better paid and is more just," he said.

Former Vice President Joe Biden repeated his false claim that he opposed the war in Iraq from the moment the war began.

Biden said he made a “mistake” in casting a 2002 vote, as a senator from Delaware, to give President George W. Bush the authority to go to war in Iraq. But he said he cast the vote because the Bush administration had said “they were just going to get inspectors” into Iraq to check for weapons of mass destruction – and that, once Bush actually went to war, he became immediately opposed: “From that point on, I was in the position of making the case that it was a big, big mistake.”

Facts First: As fact checkers have repeatedly noted, Biden did not oppose the war in Iraq from the point it started in March 2003. He did begin calling his 2002 vote a “mistake” in 2005, two years into the war, but he was a vocal public supporter of the war in 2003 and 2004. And he made clear in 2002 and 2003, both before and after the war started, that he had known he was voting to authorize a possible war, not only to try to get inspectors into Iraq.

CNN’s Facts First team has debunked various versions of Biden’s claim that he opposed the war from the moment it started. Read longer articles on that here, here and here.

In a July 2003 speech at the Brookings Institution, Biden said: "Nine months ago, I voted with my colleagues to give the president of the United States of America the authority to use force and I would vote that way again today. It was the right vote then and would be a correct vote today.”

During the Tuesday debate, Biden also offered a confusing timeline of his positions on the war, saying, “I said 13 years ago it was a mistake to give the president the authority to go to war if, in fact, he couldn't get inspectors into Iraq to stop — what thought to be — the attempt to get a nuclear weapon. It was a mistake. And I acknowledged that.”

The Democratic candidates were asked tonight how they would prioritize affordable child care for families if elected president.

Here's what some of the candidates said:

Sen. Bernie Sanders leads the group with more than 14 minutes of speaking time as of the second commercial break.

Here's the breakdown (and you can follow along live here.) 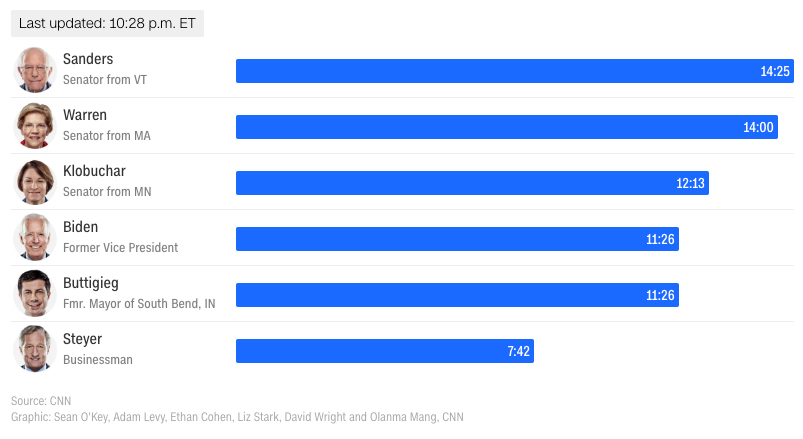