Former Vice President Joe Biden said he would not meet with North Korean dictator Kim Jong Un without preconditions, saying he’d instead push China and other Asian neighbors to pressure the country to abandon its nuclear ambitions.

It was a different answer from Barack Obama, who, while running for the presidency, said in 2008 he would meet North Korea’s leader without preconditions. That remark drew sharp criticism from conservatives at the time -- but President Donald Trump has since had such a meeting.

“Absent preconditions, I would not meet with the quote supreme leader who said Joe Biden is a ‘rabid dog’ who should be beaten with a stick,” Biden said.

“Other than that, you like him,” Vermont Sen. Bernie Sanders joked.

“And he got a love letter from Trump right after that,” Biden said.

Democrats on the debate stage tonight agree: it’s time for the US Congress to exercise its power anew to either authorize or deny the use of military force around the world.

The conversation is rooted in a 2001 vote, taken only a few days after the 9/11 attacks, that has been used now for nearly two decades by both Republican and Democratic administrations as the legal backing to continue the amorphous “War on Terror.”

Despite its historical consequences, the 2001 Authorization for Use of Military Force, or AUMF, runs only 60 words:

It was one vague paragraph, but according to a May 2016 report from the Congressional Research Service, there had been "37 relevant occurrences of an official record, disclosed publicly, of presidential reference to the 2001 AUMF in connection with initiating or continuing military or related action."

That includes "detentions and military trials," like those carried out in Guantanamo Bay, Cuba.

The question comes at a time of heightened tensions between the US and Iran: After a US airstrike killed Iran's top general, Iran announced it would no longer limit itself to the restrictions contained in the Iran nuclear deal, which the US had previously withdrawn from.

Buttigieg said ensuring Iran doesn't have nuclear weapons is a priority — but criticized President Trump for withdrawing from the deal.

"Ensuring that Iran does not develop nuclear weapons will, of course, be a priority, because it's such an important part of keeping America safe," he said.

"But unfortunately, President Trump has made it much harder for the next president to achieve that goal. By gutting the Iran nuclear deal — one that, by the way, the Trump administration itself admitted was working, certified that it was preventing progress towards a nuclear Iran — by gutting that, they have made the region more dangerous and set off the chain of events that we are now dealing with as it escalates even closer to the brink of outright war."

The six candidates on the stage Tuesday night disagreed over whether to keep troops in the Middle East, with Massachusetts Sen. Elizabeth Warren and Vermont Sen. Bernie Sanders calling for troops to come home, and former Vice President Joe Biden and Minnesota Sen. Amy Klobuchar arguing for keeping some troops in the region.

“The American people are sick and tired of endless wars which have cost us trillions of dollars,” Sanders said.

Warren added that she would “get combat troops out.”

Biden made the opposite point, arguing that it was impossible to remove all of them, a view that was echoed by Klobuchar, who said she would keep some troops in the region.

Former South Bend, Indiana, Mayor Pete Buttigieg, the only candidate on the stage who served in the military, said the United States “can continue to remain engaged without having an endless commitment of ground troops.”

Buttigieg then slammed President Donald Trump, noting that the president who called for the end to “endless war” has “more troops going to the Middle East.”

Sen. Bernie Sanders touted his vote against the Iraq war and Sen. Amy Klobuchar also mentioned that she opposed the 2003 invasion from the start.

With those comments, the 2020 election marks the fifth straight US presidential election to include a debate over the war in Iraq that started in 2003.

It’s how he began an answer to the question of why his experience best qualifies him to handle foreign policy.

“Joe and I listened to what Dick Cheney and George Bush and Rumsfeld had to say. I thought they were lying. I didn’t believe them for a moment. I took to the floor. I did everything I could to prevent that war,” Sanders said, contrasting himself with Biden.

Biden acknowledged that his vote was a “mistake.” But he also said former President Barack Obama -- who won the 2008 Democratic presidential primary in part because of his opposition to the Iraq war -- put Biden in charge of ending that war.

“I think my record overall, on every other thing we’ve done, has been -- compares to anybody on this stage,” Biden said.

For her part, Massachusetts Sen. Elizabeth Warren pointed to her position on the Senate Armed Services Committee and three brothers’ military experience. She also said the United States must “think about our defense in very different ways” -- including cyber warfare, climate change and closing what she called a revolving door between the defense industry and the Pentagon.

“That is corruption, pure and simple,” she said. “We need to block that revolving door and cut our defense budget.”

Former South Bend, Indiana, Mayor Pete Buttigieg pitched his own experience as a US Navy Reserves veteran who served in Afghanistan. “For me, those lessons of the past are personal,” he said.

Minnesota Sen. Amy Klobuchar pointed to her efforts to limit President Donald Trump’s war powers in the Senate. She also said she opposed the Iraq war from its outset.

And billionaire businessman Tom Steyer said the country spends “dramatically” too much on defense and that an outsider is needed. 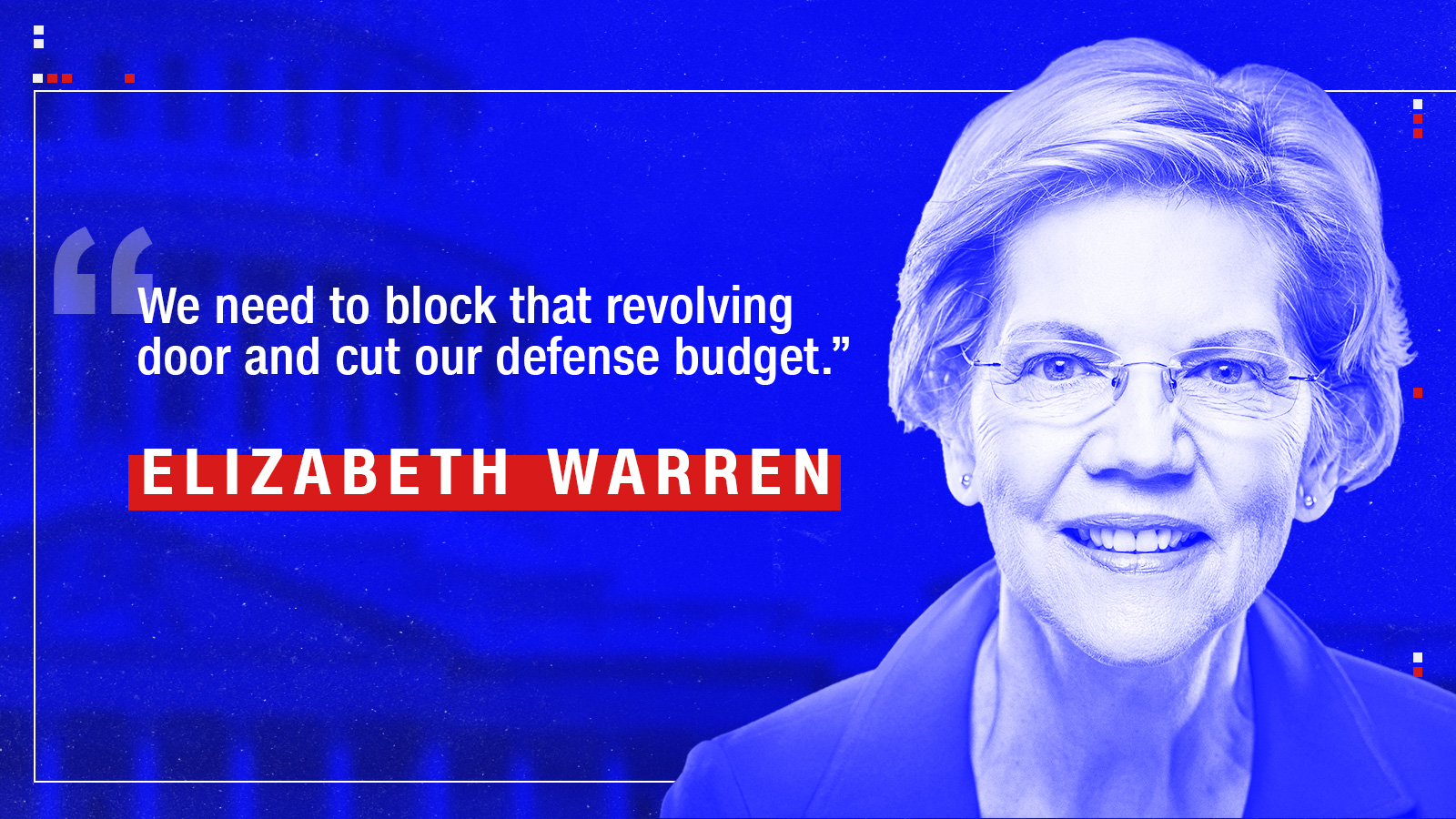 Former Vice President Joe Biden addressed the latest tensions between the US and Iran and America's standing in the world at tonight's debate.

Here's what he said about the current crisis in the Middle East:

"We're in a situation where our allies in Europe are making a comparison between the United States and Iran, saying both ought to stand down, making a moral equivalence. We have lost our standing in the region. We have lost the support of our allies. The next president has to be able to pull those folks back together, re-establish our alliances and insist that Iran go back into the agreement, which I believe with the pressure applied as we put on before, we can get done," he said.

Biden went on to say that he would leave troops in the Middle East.

"I think it's a mistake to pull out the small number of troops that are there now to deal with ISIS," he said.

With the first question of the night, Sen. Bernie Sanders brought up foreign policy and Iraq.

In response, Sanders cited his opposition to the invasion of Iraq.

"I not only voted against the war, I helped lead the effort against that war," he said.

We're expecting a lot of foreign policy talk tonight: This is the first debate after President Trump's decision to order the strike that killed a senior Iranian military commander. That move is forcing Democratic presidential contenders for the first time to seriously detail their own views of foreign policy and the United States' role in the world.

Former Vice President Joe Biden and Vermont Sen. Bernie Sanders shared a moment on stage as the candidates were introduced at tonight's debate.

Biden hugged Sanders and whispered, "We're close -- be careful of your arms."

Sanders laughed it off and the rest of the candidates were introduced.