“Did Mark Meadows ever indicate that he was interested in receiving a presidential pardon related to Jan. 6?” the committee’s Vice Chair Rep. Liz Cheney asked.

She responded the same when asked about Giuliani.

Meadows also encouraged Trump to include language about pardoning those who participated in the Jan. 6 riot in his speech the next day – an idea that was rebuffed by then-White House counsel, Hutchinson testified.

Hutchinson effectively served as Meadows’ shadow, according to multiple sources familiar with her role while working for the former White House chief of staff.

Cheney highlighted her level of access at the very beginning of Tuesday’s hearings, saying: “In short, Ms. Hutchinson was in a position to know a great deal about the happenings in the Trump White House.”

Hutchinson has previously testified that several Republican members of Congress had also inquired about a presidential pardon, either for themselves or others, around Jan. 6, 2021.

“Once again the January 6 Committee of ‘Russian Collusion”’ Liars suborned perjury from Cassidy Hutchinson,” he said. “I specifically told President Trump I did not want or need a pardon. I,also,have witnesses to corroborate that she and the Committee are perpetrating yet another lie.”

Giuliani joins a group of pro-Trump allies who have sought to discredit what Hutchinson said today in an attempt to deflect damaging accounts of their own involvement in efforts to overturn the 2020 election. Giuliani notably has not responded to CNN request for comment but did post his views on Twitter.

Rep. Liz Cheney, vice chair of the Jan. 6 committee, highlighted in today's hearing three Cabinet members who resigned following Trump's response to the insurrection at the Capitol. Here's what they said about leaving:

Former Transportation Secretary Elaine Chao: The day after the riot, Chao, who is married to Republican Sen. Mitch McConnell, posted her resignation on Twitter.

Former Education Secretary Betsy DeVos: In her resignation letter to the former President, DeVos, who served as education secretary for four years, wrote "there is no mistaking the impact your rhetoric had on the situation, and it is the inflection point for me. "

Former Deputy National Security Adviser Matthew Pottinger: After then-President Trump tweeted out on Jan. 6, 2021, that "Mike Pence didn't have the courage" to send votes back to the states, Pottinger, a former Marine Intelligence Officer, and White House aide for four years, resigned. In a video provided by the select committee, Pottinger described seeing the tweet for the first time.

Cassidy Hutchinson testified that she felt "disgusted" at seeing former President Donald Trump tweet attacks directed at then-Vice President Mike Pence on Jan. 6 — part of the President's pressure campaign on Pence to try to enlist him in the effort to overturn the election results, which Pence resisted.

Hutchinson called Trump's attacks on Pence "unpatriotic" and "un-American" and said of the storming of the Capitol, "we were watching the Capitol building get defaced over a lie."

GOP Rep. Liz Cheney displayed a tweet from Trump on Jan. 6 at 2:24 p.m. in which Trump said that Pence "didn't have the courage to do what should have been done." Cheney then asked Hutchinson how she reacted to seeing that.

"As a staffer that works to always represent the administration to the best of my ability, and to showcase the good things that he had done for the country, I remember feeling frustrated, disappointed, it felt personal, I was really sad. As an American, I was disgusted. It was unpatriotic, it was un-American. We were watching the Capitol building get defaced over a lie," Hutchinson said.

CNN obtained 2,319 text messages that Meadows handed over to the Jan. 6 committee that were sent and received between Election Day 2020 and President Joe Biden’s inauguration, including more than 150 on Jan. 6, 2021.

Meadows’ texts, which he selectively provided to the panel, show that even those closest to former President Donald Trump believed he had the power to stop the violence in real time.

CNN has a minute-by-minute timeline of the notable text messages that Meadows sent and received on Jan. 5 and Jan. 6, which have been verified by CNN. The texts include messages from former White House officials, Meadows associates and Republican members of Congress, as well as Trump’s oldest son. There are also numerous texts from reporters at news organizations such as The New York Times, Politico, Bloomberg, CBS, ABC, NBC, Fox News and CNN.

Here are some exchanges mentioned during the hearing:

Read them all here: 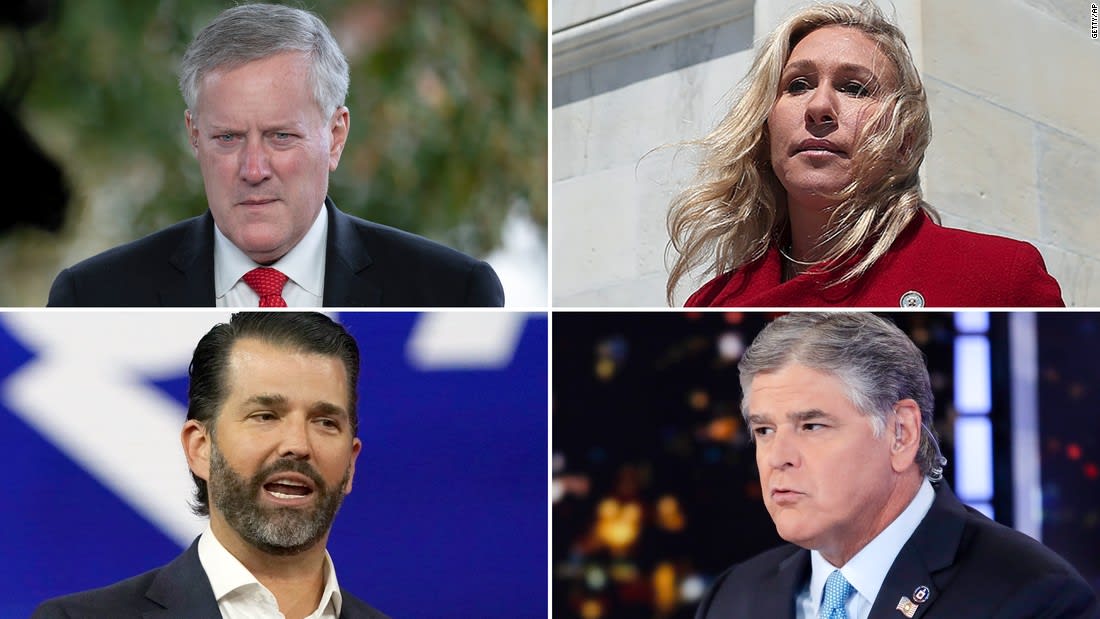 Cassidy Hutchinson, former aide to White House chief of staff Mark Meadows, said that she heard Meadows say that former President Trump did not think the Jan. 6 Capitol rioters were doing anything wrong and that Vice President Mike Pence deserved to face chants that calling for his hanging.

"To which Pat said something, 'this is f---ing crazy, we need to be doing something more," and briefly stepped into Meadows' office," she continued. The Pat she is referring to is former White House Counsel Pat Cipollone.

Hutchinson said that was the moment she "understood there to be the rioters in the Capitol that were chanting for the vice president to be hung."

The night before the Capitol riot on Jan. 6, 2021, then-President Donald Trump instructed his chief of staff Mark Meadows to ask Roger Stone and Michael Flynn what was going to happen on Jan. 6, Cassidy Hutchinson testified on Tuesday.

Hutchinson, who was a top Meadows aide, said that Meadows called both Flynn and Stone that evening.

Meadows also repeatedly tried to go the Willard Hotel on Jan. 5, Hutchinson said, where Flynn and Stone, along with Trump allies John Eastman and Rudy Giuliani, had set up a makeshift "war room."

“I had made it clear to Mr. Meadows that I didn't believe it was a smart idea for him to go to the Willard Hotel that night,” Hutchinson testified. “I wasn't sure everything that was going on at the Willard Hotel, but I knew enough about what Mr. Giuliani and his associates were pushing during this period.”

“I didn't think that it was something appropriate for the White House chief of staff to attend or to consider involvement in,” Hutchinson added. “I made that clear to Mr. Meadows.”

Meadows eventually agreed to stay at the White House and call into a meeting with those at the Willard.

Stone and Flynn both attended the “Stop the Steal” rally on Jan. 6 but are not charged with a crime. They both appeared before the select committee and repeatedly pleaded the Fifth Amendment.

Stone has been central to the criminal allegations against the far-right extremist group the Oath Keepers. Stone had a protective detail made up of members of the Oath Keepers, a few of whom have been criminally charged with seditious conspiracy. In court filings, those members have argued that they were only in Washington to protect VIP rally attendees.

"I remember Pat saying to him something to the effect of, 'the rioters have gotten to the Capitol. We need to go down and see the President now,'" Hutchinson said in a videotaped interview.

"And Mark looked up at him and said, 'he doesn't want to do anything, Pat,'" she said.

Cipollone emphasized the need for action to control the situation to Meadows, Hutchison added.

She said Cipollone "very clearly said this to Mark — something to the effect of, 'Mark, something needs to be done or people are going to die and the blood's going to be on your f-ing hands. This is getting out of control. I'm going down there."

Meadows then handed his phones to Hutchinson and walked out of his office with Cipollone, she told the committee.

Aides to former President Donald Trump were left speechless amid the first half of Cassidy Hutchinson's testimony on Tuesday, acknowledging to CNN that her testimony was "a bombshell" with potentially huge repercussions for Trump.

"This is a bombshell. It's stunning. It's shocking. The story about the beast – I don't have words. It's just stunning," said one Trump adviser.

"This paints a picture of Trump completely unhinged and completely losing all control which, for his base, they think of him as someone who is in command at all times. This completely flies in the face of that," the adviser added.

The Trump adviser, who was in a group text chat with several other Trump aides and allies as the hearing played out, said that "no one is taking this lightly."

"For the first time since the hearings started, no one is dismissing this," the adviser said.

Another Trump ally told CNN the testimony from Hutchinson, a former top aide to White House chief of staff Mark Meadows, would seal Meadows' fate as "persona non grata" to the former President.

"This is one of the reasons [Trump] is furious with Meadows. He was already iced out but now he will be persona non grata," this person said.

The startling revelations from Hutchinson's testimony about Trump's erratic behavior and state of mind on Jan. 6 could make it easier for Republican presidential hopefuls to challenge the former President in a primary should he run, the Trump ally added.

"This is basically a campaign commercial for Ron DeSantis 2024," said the Trump ally.

She added that Meadows spoke with Stone and Flynn but she did not know what they discussed.

Republican Rep. Liz Cheney pointed out during Tuesday's hearing that Flynn has appeared before the committee, at which time, "he took the Fifth Amendment," invoking his right against self-incrimination when asked about the events surrounding Jan. 6, 2021.

Cheney then played a portion of the video of Flynn's prior testimony in which she asked him if he believed the violence on Jan. 6, 2021 was justified. Flynn responded, "take the fifth."

In a follow-up question, when Cheney asked Flynn if he believes in "the peaceful transition of power in the United States of America," he responded, "the fifth."