CNN previously reported that Schiff was expected to play a leading role in Tuesday's hearing.

Schiff is a Democrat from California and serves as chairman of the House Permanent Select Committee on Intelligence.

"January 6 will be remembered as one of the darkest days in our nation's history. Yet, more than a year later, the threat to our democracy is as grave as ever. January 6 was not a day in isolation, but the violent culmination of multiple efforts to overturn the last presidential election and interfere with the peaceful transfer of power for the first time in our history," Schiff said in a statement to CNN.

"The former President and his allies have spent every day since January 6 attempting to rewrite history about that bloody attack on our nation's Capitol. That's why these public hearings are so essential — to show the American people exactly how January 6 came about, who is responsible, and most critically, what we can and must do to prevent another attack on our democracy."

Read about the other Jan. 6 committee members here.

After the 2020 election, senior Justice Department officials told then-President Donald Trump that he lost Georgia fair and square, and debunked his conspiracy theories about the Georgia election to his face, according to new testimony revealed Tuesday during the Jan. 6 select committee hearing.

“We took a look, hard look at this ourselves,” former Attorney General Bill Barr told Trump, according to a videotaped deposition clip that was played during Thursday’s hearing. “And based on our review, including interviews of the key witnesses, the Fulton County allegations had no merit.”

Barr added, “There was no evidence of subterfuge… we didn’t see any evidence of fraud.” This was the latest in a series of clips the committee has played of Barr debunking Trump’s election-related conspiracy theories.

Almost the entire city of Atlanta is in Fulton County, and Trump repeatedly claimed that there were irregularities and illegal voting in the city, even though there was no evidence to back up his claims.

Richard Donoghue, who was the acting deputy Attorney General after Barr stepped down in December 2020, also told the committee about his conversations with Trump about Georgia. He told the committee that he said to the president, “sir, we’ve done dozens of investigations, hundreds of interviews. The major allegations are not supported by the evidence developed.”

The House select committee investigating the deadly Jan. 6 insurrection at the US Capitol has begun its fourth hearing of the month.

The panel is expected to focus on how former President Donald Trump and his allies pressured officials in key battleground states as they sought to overturn the 2020 presidential election.

Committee aides said the hearing will also demonstrate how Trump and his allies concocted a scheme to submit fake slates of electors.

The committee will hear live testimony from four witnesses in two separate panels.

The committee plans to show video testimony of depositions from officials in other states where Trump and his allies pressured state-level officials to try to block Biden's election win.

Heading into the hearing, Jan. 6 committee chair Bennie Thompson told CNN that the panel will reveal information on Republican members who sought pardons from former President Donald Trump “over the next few weeks.” He said it won’t come out today.

The committee has accused GOP Rep. Scott Perry of seeking a pardon, something he has denied, and has promised more information about pardon requests from multiple Republicans. 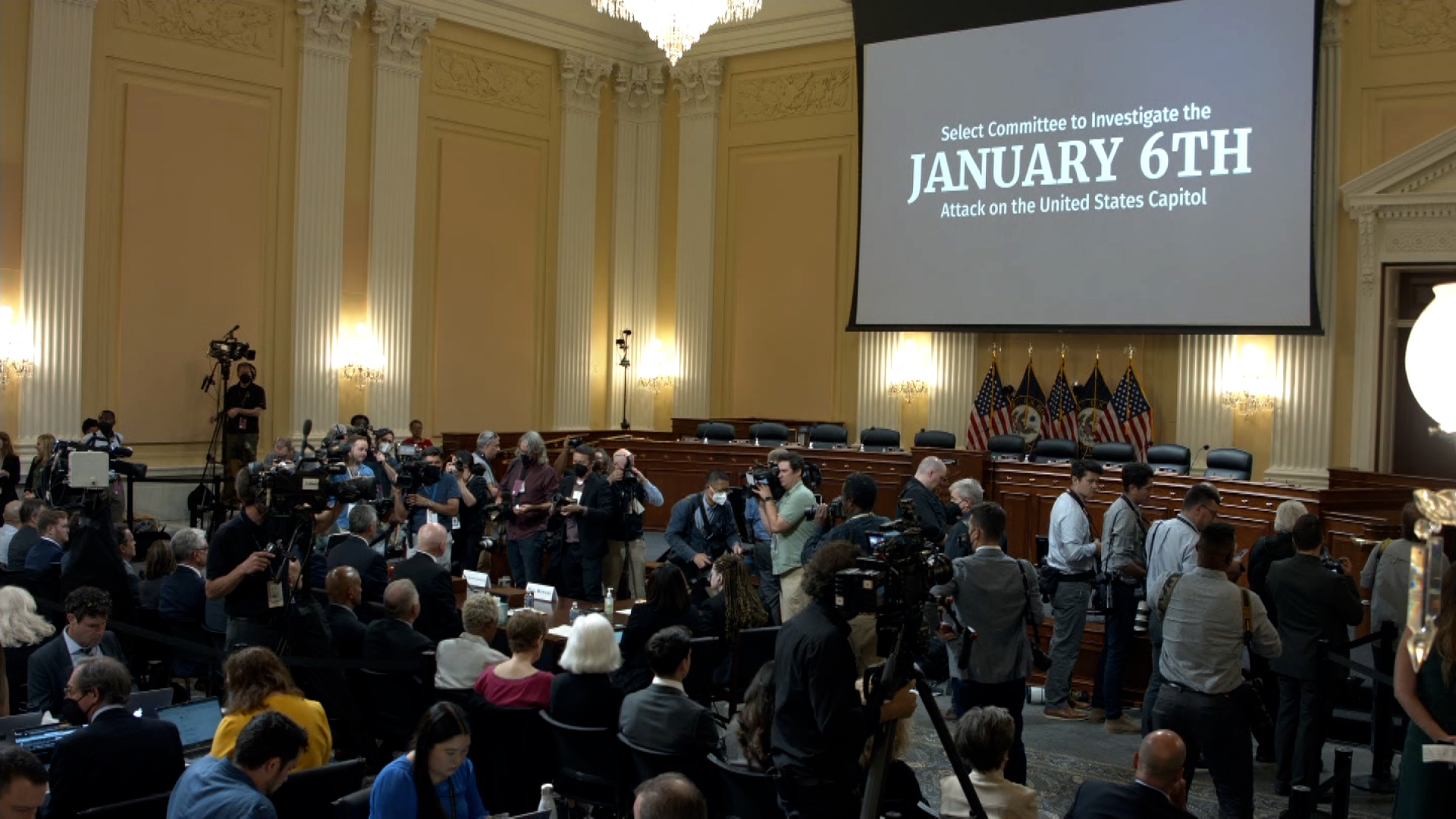 The House select committee investigating the Jan. 6, 2021, attack on the US Capitol turns its attention Tuesday to the campaign to pressure state-level officials to overturn the 2020 election results.

The hearing will focus in particular on then-President Donald Trump's efforts to overturn the results in Arizona and in Georgia — where Trump infamously asked Georgia Secretary of State Brad Raffensperger to "find" the votes he needed to win.

Committee aides said the witnesses testifying in person on Tuesday from Arizona and Georgia will be able to speak to the pressure campaign that came from the White House, as well as the backlash they received from Trump's supporters.

The witnesses from Georgia include Raffensperger and his chief operating officer, Gabe Sterling, both of whom faced relentless attacks from Trump after certifying the state's election. Fulton County election worker Wandrea "Shaye" Moss, who was falsely accused by Trump of ballot fraud, will also testify about the backlash she faced.

Arizona House Speaker Rusty Bowers, a Republican, will testify about the pressure he received from Trump and Giuliani, according to committee aides.

Here are key things to watch for during today's hearing:

The Meadows connection: Rep. Adam Schiff, the committee member who will lead Tuesday's hearing, told the Los Angeles Times on Monday that the hearing would show how Trump's former White House chief of staff Mark Meadows had played an "intimate role" in the efforts to pressure Georgia state legislators and election officials.

Committee aides said the hearing would "demonstrate his involvement" in Georgia in the run-up to Jan. 6.

Meadows reached out multiple times to Raffensperger after the 2020 election, according to text messages obtained by CNN, and he participated in Trump's January 2021 call where the former President asked Raffensperger to "find" the votes the then-President needed to win.

While that call was going on, Meadows was texting with the deputy secretary of state, who urged him to end the call that now stands at the center of Fulton County's investigation into whether any of the actions Trump or his allies took related to Georgia's election were criminal.

Testimony from those who faced backlash from Trump's attacks: The witnesses will be able to testify firsthand on Tuesday about the impact of Trump's pressure campaign and false claims about the election — as they all were subjected to attacks and threats.

Aides said that Bowers, the Arizona secretary of state, will be able to testify about the "campaign of harassment" he was subjected to in the run-up to January 6 and the months that followed.

Raffensperger and Sterling were attacked by Trump and his allies for certifying Georgia's election. Sterling warned in a December 2020 news conference that "it's all gone too far" after local election officials had been subjected to threats and harassment.

Moss, who was a Fulton County election worker in 2020, will testify how her mother's and her lives were upended and they were forced to go into hiding after Moss was accused by Trump of carrying out a fake ballot scheme, according to committee aides. She and another election worker sued Giuliani last year.

In her written testimony provided on Monday, Moss said the false stories accusing her of taking part in voter fraud had led to her receiving death threats.

Rep. Adam Schiff told CNN's Dana Bash on Sunday that the Jan. 6 committee has evidence former President Donald Trump was involved in the fake electors effort, and CNN is told the committee will present a multilayered pressure campaign in their hearing today. The key word: coordination.

It was Trump, former Trump attorney Rudy Giuliani, and the lawyers who helped undercut the election — like Jenna Ellis and others — who coordinated a misinformation campaign and pushed it to the state legislatures in the key states and not members of Congress who were going to vote on Jan. 6, 2021.

The committee has talked to some of the alternate (fake) electors as well. In the hearing today, the committee is expected to play taped sound bites from at least one of the fake electors the administration targeted.

British filmmaker Alex Holder acknowledged Tuesday that he has complied with a subpoena from the House select committee investigating Jan. 6, turning over footage that includes never-before-seen interviews with former President Donald Trump, members of the Trump family and then-Vice President Mike Pence.

Holder, who was filming a documentary series surrounding the final six weeks of Trump’s re-election campaign, wrote in a statement Tuesday that the interviews were filmed before and after the events of Jan. 6.

“As a British filmmaker, I had no agenda coming into this. We simply wanted to better understand who the Trumps were and what motivated them to hold onto power so desperately,” Holder wrote. “We have dutifully handed over all the materials the Committee has asked for and we are fully cooperating.”

Holder also says he will be deposed by the committee on Thursday. Politico first reported the committee’s subpoena of Holder. A Select Committee spokesperson declined to comment.

Senior Trump campaign officials were caught off guard when they learned that the British filmmaker was given extensive access in the final weeks of President Trump’s 2020 campaign, several told CNN.

The first time senior campaign staff heard of the documentary was when it was reported by Politico Tuesday morning, according to one of the senior staffers. Another senior official on the campaign told CNN he was totally unaware Trump was cooperating with Holder, who says he has complied with a subpoena from the Jan. 6 committee to share his footage.

This aide, who traveled often with the President and worked out of his Arlington, Virginia, campaign headquarters, said he was also never asked to sign anything granting his permission to be filmed.

"I don't remember it. I honestly don't recall ever being told about something like that," the official said.

“The first time senior 2020 campaign leadership ever heard of the documentary was this morning’s Politico Playbook,” another added.

Stephanie Grisham, who was chief of staff to former first lady Melania Trump during the campaign, told CNN she "had no idea" a filmmaker was documenting Trump's reelection campaign and final days in the White House.

A third campaign official also said the committee's subpoena of a documentary filmmaker who was cooperating with Trump was news to him even though he spent most of his time on the campaign trail with the candidate himself.

"I heard about it in passing," said a third Trump campaign official, who is now involved in Trump's post-presidential operation. "It wasn't necessarily a secret."

Two attorneys for Trump's 2020 campaign did not immediately respond to requests for comment.

Today’s hearing is focusing on a part of the Jan. 6 attack that is now an active part of the Justice Department investigation that goes beyond the rioters.

While members of the Jan. 6 committee have voiced frustration at Attorney General Merrick Garland for the pace of the federal criminal probe, this part of the sprawling Justice Department investigation has picked up pace in recent weeks with CNN reporting on multiple subpoenas issued to people involved in the fake electors scheme.

The FBI and Department of Justice prosecutors appear to be zeroing in on lawyers for the Trump campaign and a few other close advisers, in addition to those who served as Trump electors themselves.

A lot of this activity seems to be an effort by the Justice Department to make sure their investigative actions don’t interfere with the midterm elections.

Today’s Jan. 6 committee hearing will include information about how at least one Republican member of Congress pressured at least one state to overturn its election results, three sources familiar with the matter told CNN.

Overall, the testimony today of the four witnesses will feature a key theme: how the election-fraud conspiracies and lies led to threats to the witnesses' personal safety — as the committee tries to show the real world consequences of the former President's words, according to a source with direct knowledge of the matter.

The testimony from the state officials also will underscore the idea pushed by the committee that the country was dangerously close to a real constitutional crisis, but a few principled people withstood the pressure and prevented that from happening.

A key part of the testimony today will feature the pressure on Rusty Bowers, the Republican Arizona House speaker who backed former President Donald Trump in 2020, but would not give in to his pressure campaign. Trump and his allies repeatedly promised proof of widespread fraud, but Bowers has indicated that he never received the evidence they claimed to have, the source said.