The House select committee investigating the Jan. 6 insurrection at the US Capitol just wrapped up its seventh public hearing.

The committee focused on the role of extremist groups and how the violent mob came together. The hearing explored the Trump administration's connections to these groups, such as the Proud Boys and the Oath Keepers, ahead of the riot.

Jason Van Tatenhove, a former spokesperson for the Oath Keepers, and Stephen Ayres, who participated in the insurrection, testified. The hearing also featured clips from the deposition of former White House counsel Pat Cipollone.

The House select committee said Tuesday it has evidence that Stewart Rhodes, the leader of the Oath Keepers, shipped thousands of dollars worth of tactical gear to a Jan. 6 rally planner in Virginia before the attack.

The details of the shipment have not previously been alleged, though the Justice Department has claimed that Rhodes allegedly bought an AR-platform rifle and other firearms equipment, including sights, mounts, triggers, slings, and other firearms attachments and equipment on his way to Washington, DC.

The committee did not identify the rally organizer, nor did they specify what kind of tactical gear Rhodes allegedly sent.

Rhodes’ attorney denied the allegation to CNN, saying there has been no evidence that Rhodes shipped tactical gear to anybody before or after the riot.

Rhodes has been charged with seditious conspiracy by the Justice Department and has pleaded not guilty.

Former White House counsel Pat Cipollone testified for eight hours in front of the House Jan. 6 Committee on Friday in a closed-door interview. Here are some key moments of his testimony played at the committee's seventh hearing on Tuesday.

He did not think there was sufficient evidence of election fraud: In his testimony, Cipollone said he agreed with former Attorney General Bill Barr, who concluded there was insufficient evidence of election fraud. He recounted former chief of staff Mark Meadows saying in November 2020 that then-President Trump should have conceded, to which he said he agreed. Jason Miller, a former senior adviser to Trump, told the committee that Cipollone called John Eastman's theory to overturn the election "nutty." Cipollone did not refute this statement.

He was verbally attacked during the Dec. 18, 2020 meeting at the White House. Cipollone told the committee he walked into the Dec.18 meeting attended by Trump, former Trump campaign lawyer Sidney Powell, former national security adviser Michael Flynn and former Overstock CEO Patrick Byrne, none of which, he said, he was "happy to see."

The meeting, which lasted six hours, was described as “unhinged” by former Trump White House aide Cassidy Hutchinson after hearing screaming coming from the West Wing. Ideas circulated about overturning the election including Flynn's suggestion to invoke martial law and inspection of voting machines.

“I don’t think any of these people were providing the President with good advice,” Cipollone told the committee.

In addition to floating claims of voter fraud and plots to overturn the election, Cipollone described his opposition to Trump’s suggestion of naming Powell as a special counsel to investigate voter fraud in the 2020 election. "I was vehemently opposed — I didn't think she should be appointed to anything," Cipollone told the committee during his closed-door interview, according to a video clip from that meeting played Tuesday.

“That's not how we do things in the United States. There's no legal authority to do that," Cipollone said.

Rep. Liz Cheney, vice chair of the Jan. 6 committee, said former President Donald Trump attempted to contact a witness who has not yet been publicly identified.

“After our last hearing, President Trump tried to call a witness in our investigation, a witness you have not yet seen in these hearings,” Cheney saidat the end of the House select committee hearing on Tuesday. “That person declined to answer or respond to President Trump's call, and instead alerted their lawyer to the call. Their lawyer alerted us. And this committee has supplied that information to the Department of Justice.”

As notable as Cheney's revelation is, she also raises the possibility that the incident could prompt interest from Justice Department prosecutors.

This is the first time the committee has explicitly described providing information to the Justice Department that they discovered during their probe.

Those, however, weren't from Trump himself — and Trump's personal involvement raises the stakes if the message was intended to impact a witness' testimony.

Cheney didn't disclose the substance of it.

It's still not clear how the committee communicated the information to the Justice Department, and whether it could be considered a criminal referral.

The Justice Department hasn't responded to CNN's request for comment.

Capitol rioter Stephen Ayres shook hands with officers who defended the US Capitol during the Jan. 6 insurrection after Tuesday's hearing.

Committee vice-chair Liz Cheney said the next public hearing will zero in on what former President Donald Trump and his team were doing on Jan. 6, 2021, and specifically while the insurrection was going on.

"For multiple hours, Donald Trump refused to intervene to stop it. He would not instruct the mob to leave or condemn the violence. He would not order them to evacuate the Capitol and disperse," Cheney said.

She said the committee will also show that members of Congress and his own staff pleaded with the former President to help. Cheney said the hearing will walk through the events of Jan. 6 "minute by minute."

The committee's next hearing will be next week. It will be aired live on CNN and a livestream will be featured on CNN.com without requiring a login. CNN's special coverage of the hearing will stream live on the CNN app, and live coverage with updates will be on CNN.com and cnnespanol.cnn.com.

Democratic Rep. Jamie Raskin of Maryland, a member of the Jan. 6 committee, said in closing remarks at today's hearing that "American carnage" is former President Trump's "true legacy" in the wake of the Jan. 6, 2021 insurrection.

"American carnage, that's Donald Trump's true legacy. His desire to overthrow the people's election and seize the presidency interrupted the counting of Electoral College votes for the first time in American history, nearly toppled the Constitutional order, and brutalized hundreds and hundreds of people," Raskin said.

"The Watergate break in was like a Cub Scout meeting compared to this assault on our people and our institutions," Raskin said.

Raskin was making reference to a now-famous line from a speech Trump gave in which he invoked the concept of "American carnage." 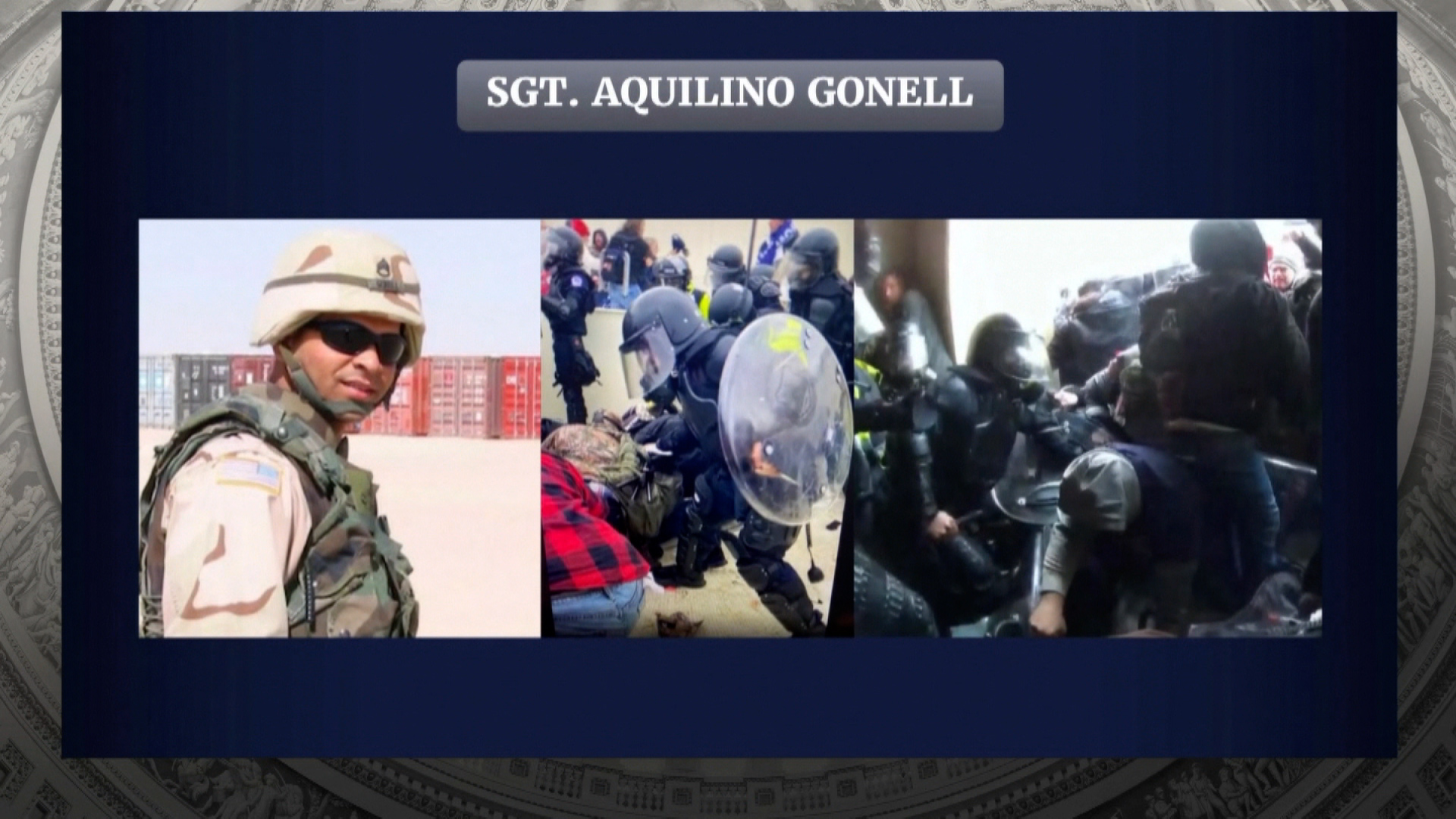 US Capitol Police sergeant Aquilino Gonell has been forced to quit policing due to injuries sustained during the Jan. 6 attack, Rep. Jamie Raskin said during today's hearing.

Gonell was in the audience for today's hearing and grew emotional as Raskin described how the police officer's injuries that day ended his career.

"Last month, on June 28, a team of doctors told him that permanent injuries he has suffered to his left shoulder and right foot now make it impossible for him to continue as a police officer. He must leave policing for good and figure out the rest of his life," Raskin said.

According to Raskin, Gonell, who is an Iraq War veteran and testified to the committee after the Jan. 6 attack, told them that "nothing he ever saw in combat in Iraq prepared him for the insurrection, where he was savagely beaten, punched, pushed, kicked, stomped, and sprayed with chemical irritants along with other officers. By members of a mob carrying hammers, knives, batons, and police shields taken by force. And wielding the American flag against police officers as a dangerous weapon."

A former spokesperson for the Oath Keepers, an extremist group, says it is "exceedingly lucky that more bloodshed did not happen."

Jason Van Tatenhove said the potential for more violence "has been there from the start," adding that he is worried about the next election. He said as tragic as it is that some people were killed during the insurrection, including law enforcement officers, "the potential was so much more."

"All we have to look at is the iconic images of that day with the gallows set up for Mike Pence. For the Vice President of the United States," Van Tatenhove said.

Looking ahead, he said he doesn't know what the next election might bring, but he is worried that if former President Donald Trump runs again in 2024, he will try to "whip up a civil war amongst his followers using lies and deceit."

“What else is he going to do if he gets elected again? All bets are off at that point," he added, saying that he is worried about the world his daughters and granddaughter will inherit if people are not held accountable.

Former Oath Keepers spokesperson Jason Van Tatenhove says he fears for the next election cycle. Hear him explain why: