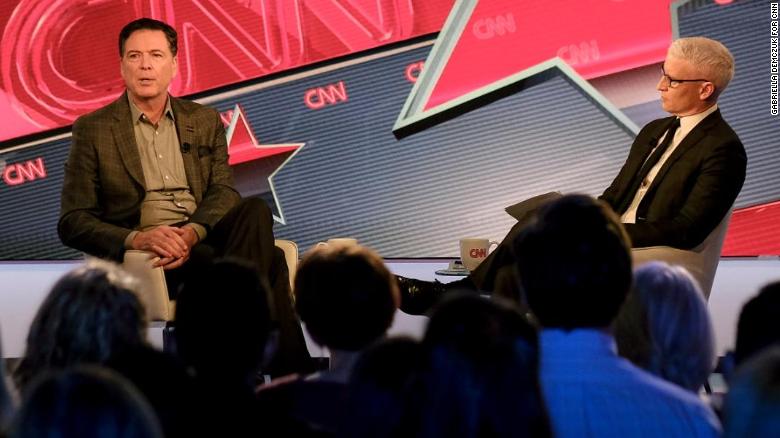 Former FBI Director James Comey said special counsel Robert Mueller should testify before Congress so he can "explain his thinking."

He then went on to explain what he thought was behind Mueller's decision not to indict President Trump for obstruction of justice.

"I think his judgment was, look, we can't indict him anymore," Comey said.

"We've got lots of evidence of obstruction of justice. We're compiling it for a future prosecutor. So why engage in a really long battle over forcing him to give us answers. We'll collect this information, preserve it for the future, and not waste the time with that battle. I don't know in hindsight whether that was the right call or not."

Asked if he thought Mueller made a mistake by not speaking out and allowing Attorney General William Barr to define the report, Comey said he thinks it's possible Mueller would have done things differently.

"In hindsight, maybe Bob Mueller would have approached it differently," Comey said.

Cooper: "You think the Russians have leverage over President Trump?"

Comey: "I don't know the answer to that." 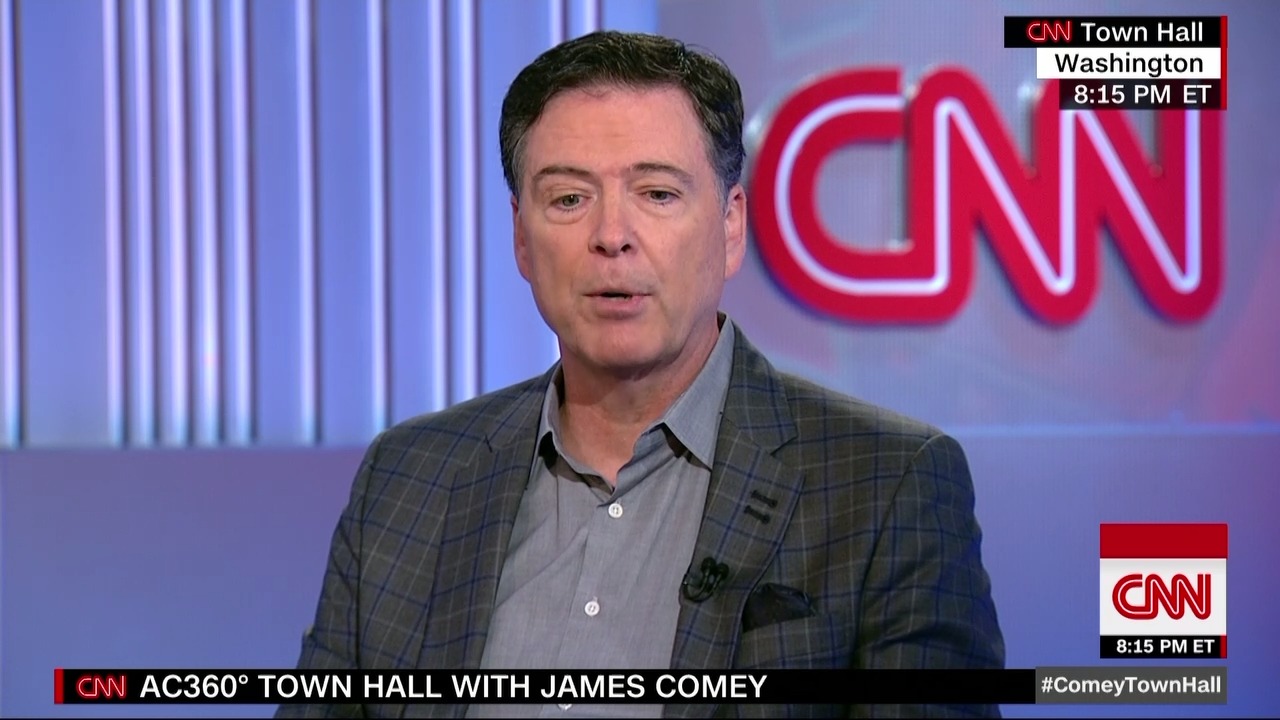 Former FBI Director James Comey said President Obama "faced a very difficult choice" when it came to notifying the American public that the Russians were meddling in the 2016 election, because it would have helped them meet one of their goals -- destabilizing American democracy.

"The No. one goal for the Russians is to damage our democracy and undermine faith in our electoral process," Comey explained.

"If [Obama] makes an announcement that the Russians are coming for the election, has he just accomplished their goal for them? And is he giving Donald Trump an excuse to say Obama fixed the election?"

"I get why he struggled with it," Comey said, adding that Obama did a "very sensible thing" by trying to get the bipartisan leaders of Congress to jointly tell the American people it was happening.

"In my view, to their everlasting shame, the Republicans refused," Comey said.

McConnell didn't see it that way: Senate Majority Leader Mitch McConnell dismissed concerns in March 2018 from Obama's former chief of staff that he didn't respond properly to suspected Russian interference in the 2016 election, saying, "I'm perfectly comfortable with the steps that were taken back then." 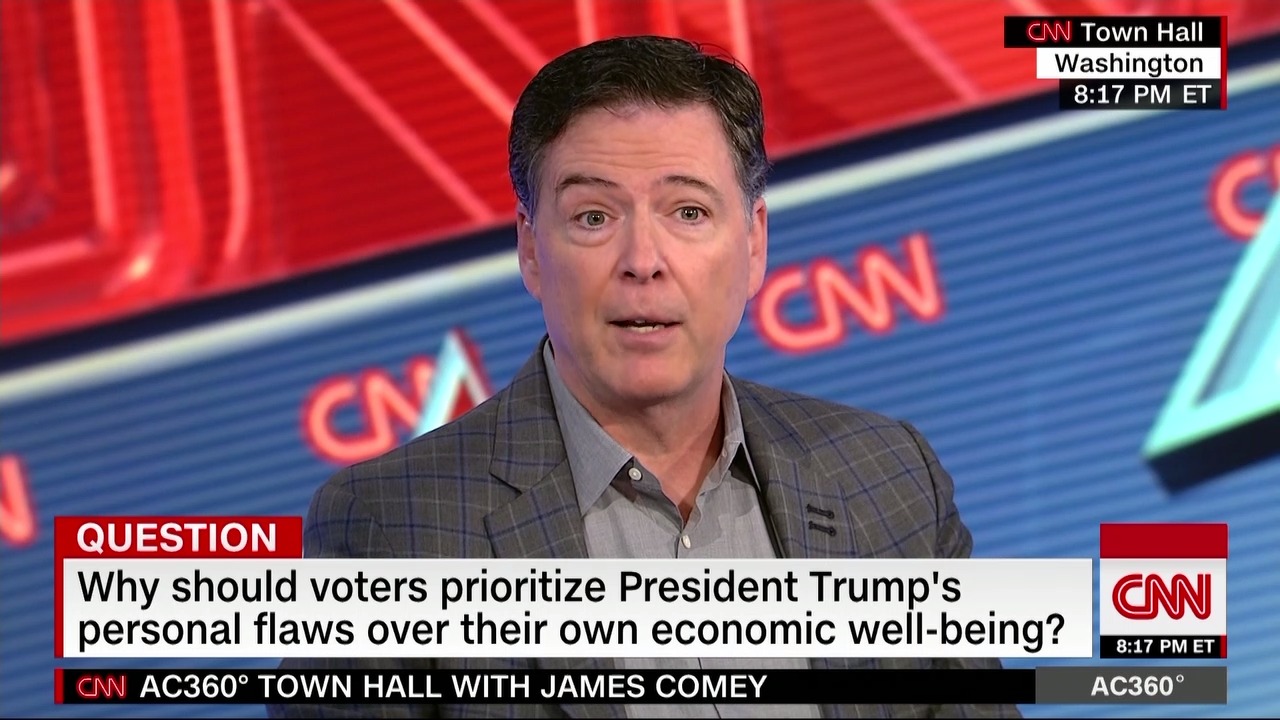 Former FBI Director James Comey should consider President Trump's character when their voting for the country's next president.

"To my mind, this question at the top level is so obviously answered, you cannot have a president who's a chronic liar. I don't care what your passions around tax cuts or regulation or immigration. I respect difference there," he said.

"The President of the United States cannot be someone who lies constantly. I thought Republicans agreed with that. It's one of the reasons I'm no longer a Republican. I hope the American people will realize we have to start at that values level no matter what our political background and answer that question first. And if that's a close question in an election, then get to the important policy differences." 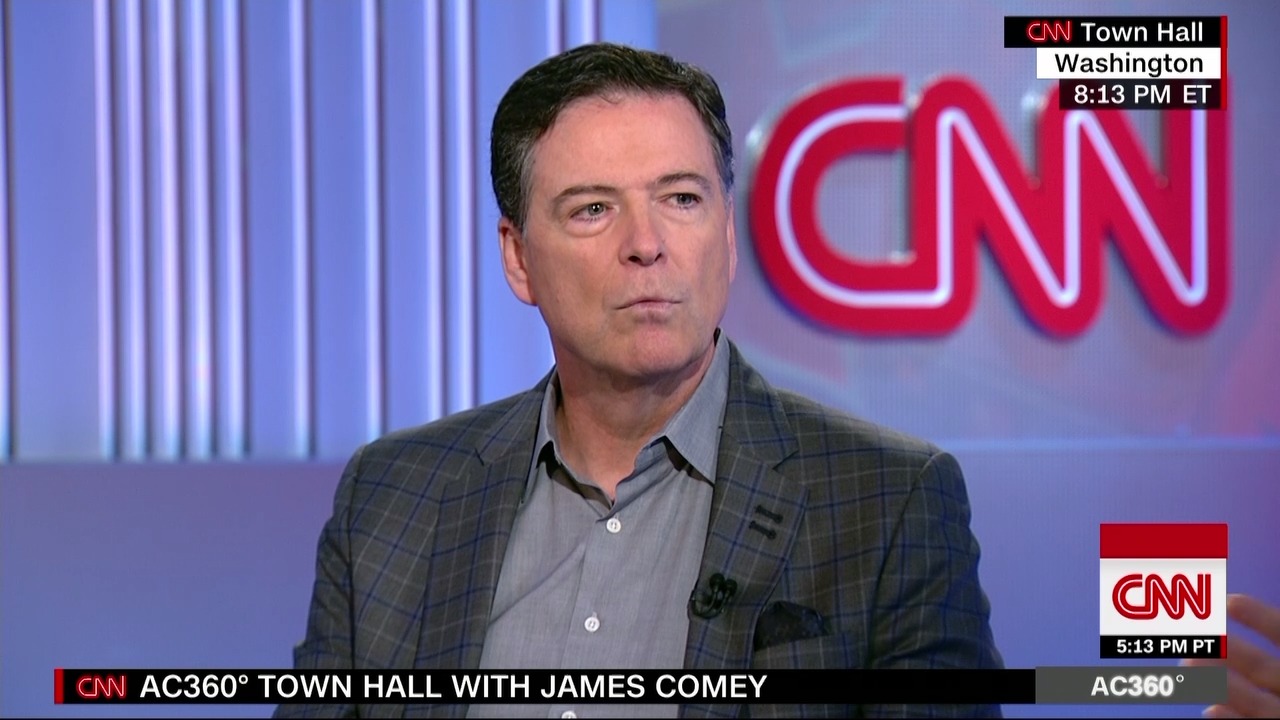 Asked if he thinks President Trump should be charged based on evidence in special counsel Robert Mueller's report, former FBI Director James Comey said the Department of Justice should "take a serious look at that.

"I think the Justice Department will have to take a serious look at that. Whether it's a wise thing to do to a former president, I don't know. That's a harder question, a much bigger question than the facts of the case."

CNN's Anderson Cooper went on to ask if he through there was enough evidence to prosecute Trump.

Comey said: "Sure looks like it's there with respect to at least a couple of those episodes of obstruction."

Former FBI Director James Comey says he believes there is a chargeable case for obstruction and witness tampering against President Trump, based on what he saw in special counsel Robert Mueller's report.

"It sure looks like he did in connection with a couple of episodes," the former FBI director said, citing Trump directing Former White House Counsel Don McGahn to get rid of Mueller. He called that a "flaming example."

He added that, without a doubt, he agreed with the 800 former federal prosecutors who  signed a statement saying that Mueller's findings would have produced obstruction charges against President Trump -- if he weren't president. 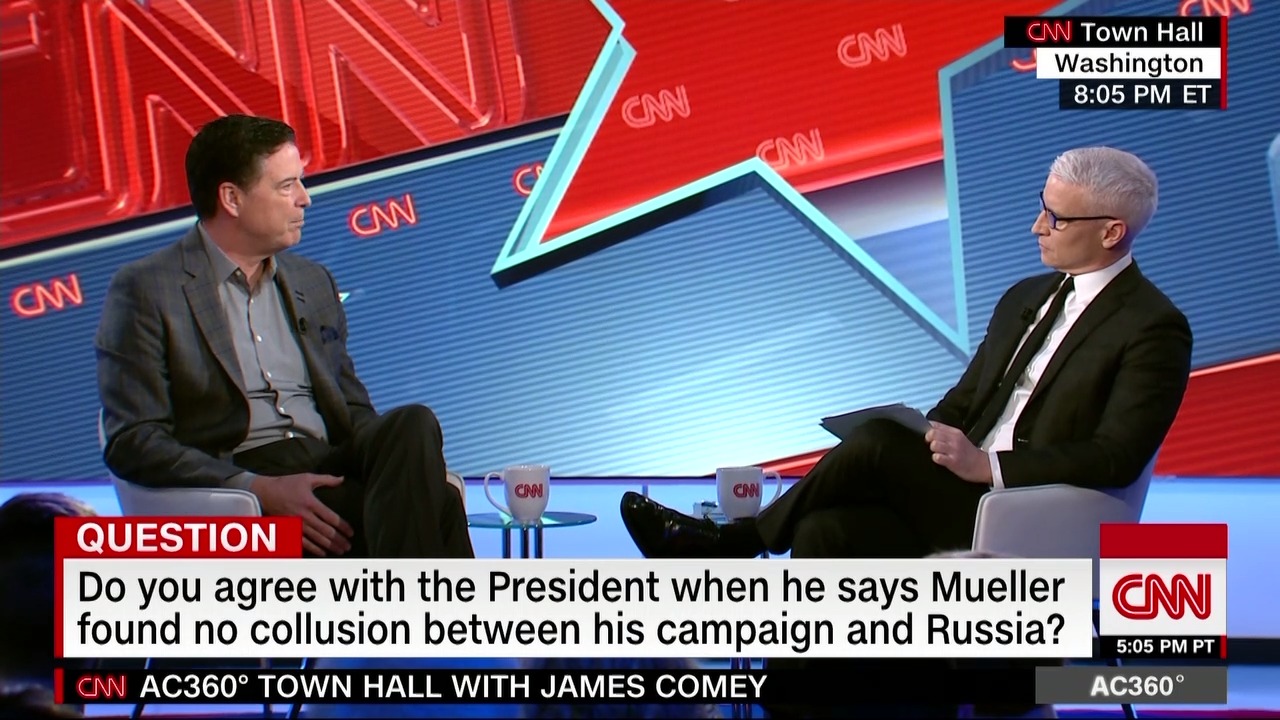 Comey responded, "Well, that's actually not what the report says."

"He found there was not sufficient evidence to charge a conspiracy between Americans and the Russian effort. That strikes me as a reasonable conclusion, and I accept it," he said. 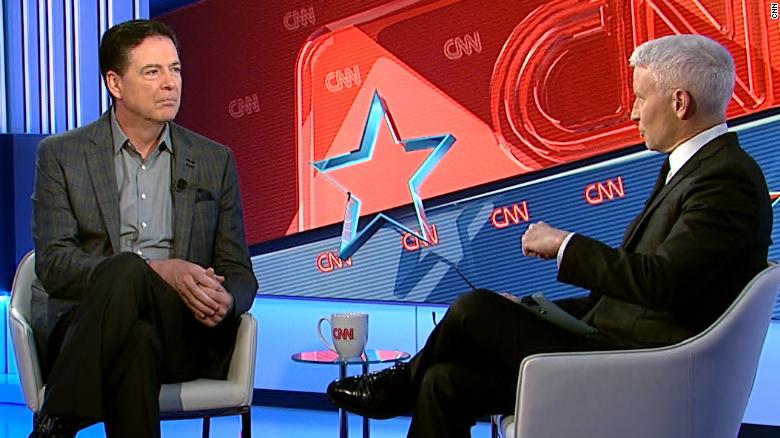 "There were a lot of facts in the Mueller report that I didn't know, but I knew it would be high quality work if we got a chance as a country to read it. And what he describes about Russia's intervention in our election didn't surprise me at all. It confirmed what I knew from when I was at the [FBI]. And what he lied out about -- the President's efforts to obstruct justice was broader in scope than I personally knew, but given what I had seen, it didn't surprise me, honestly," he said.

Comey added that he believes Mueller got everything about him right. 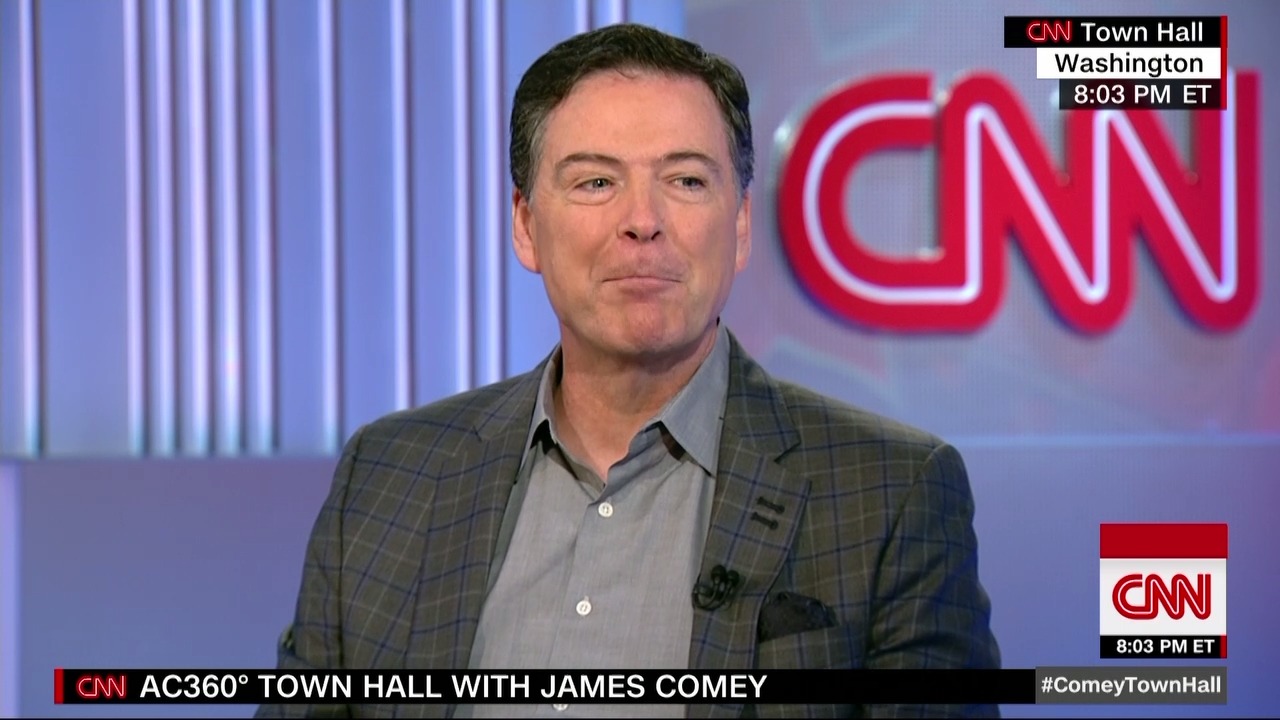 Anderson Cooper: "Is Mueller in love with you?"

James Comey: "I respect him. I don't think we have that kind of relationship."

Cooper: "You just want to be friends with him."

Comey: "He's certainly not obsessed with me in the way some others seem to be."