"A Higher Loyalty": Comey is set to start a publicity tour next week for his upcoming book, which is poised to offer a remarkable look into his relationship with Trump.

April 19: Comey will speak with CNN's Jake Tapper, then participate in a CNN town hall on April 25.

Conway told CNN this morning that Trump is now "correcting the record because there were two people involved in the conversations."

That marked the start of Comey's publicity tour for his new book, "A Higher Loyalty," which will be released tomorrow. This will be the first time the American public has heard extensively from Comey since his explosive testimony before the Senate Intelligence Committee in June of last year.

The morning after former FBI director James Comey's first interview since being fired, President Trump is tweeting about him:

The President criticized Comey on Twitter before his Sunday night interview, too. Here are some of the Saturday morning tweets:

With an unusually long editorial in Monday's newspaper, The New York Times is making a forceful statement: "The president is not above the law."

The 1,366-word article warns that President Donald Trump "may act to cripple or shut down an investigation by the nation's top law-enforcement agencies into his campaign and administration." It says that "lawmakers need to be preparing now for that possibility because if and when it comes to pass, they will suddenly find themselves on the edge of an abyss, with the Constitution in their hands."

"More Republicans need to make it clear that they won't tolerate any action against either man," The Times says.

The editorial takes up a full page of Monday's Times. Normally, there are several editorials and letters from readers on the page. But the editorial page editor, James Bennet, said this moment in time called for a unique response. 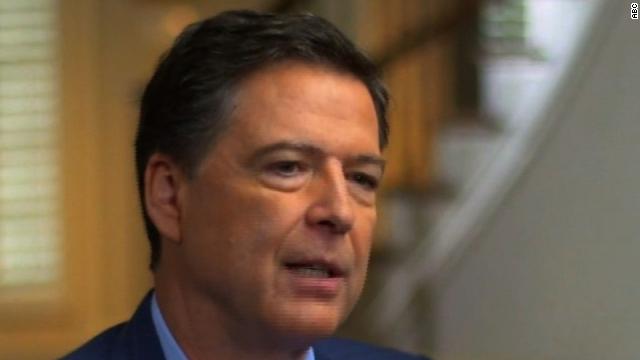 He talked a lot about President Trump and the Hillary Clinton email investigation.

Here are some of the things he said:

On Trump's presidency: "I think he's morally unfit to be president."

On whether Trump should be impeached: "I hope not because I think impeaching and removing Donald Trump from office would let the American people off the hook, and have something happen indirectly, that I believe they're duty bound to do directly."

On whether Trump obstructed justice: Comey said there is "certainly some evidence of obstruction of justice."

On being fired: "I thought it's crazy to fire me."

On whether Russia has compromising information on Trump: "I think it's possible. I don't know. These are more words I never thought I'd utter about a President of the United States, but it's possible."

“James Comey’s publicity tour reaffirms that his true higher loyalty is to himself. The only thing worse than Comey’s history of misconduct is his willingness to say anything to sell books. He has no credibility and President Trump was right to follow through on the bipartisan calls for him to be fired.”

"I hope not because I think impeaching and removing Donald Trump from office would let the American people off the hook, and have something happen indirectly that I believe they're duty bound to do directly," Comey said.

"People in this country need to stand up and go to the voting booth and vote their values. And so -- impeachment, in a way, would short circuit that."

The remarks came in an interview tonight with ABC's George Stephanopoulos.

Asked if he thinks Trump is unfit to be president, Comey said, "Yes."

"But not in the way I often hear people talk about it," he said. "I don't buy this stuff about him being mentally incompetent or early stages of dementia. He strikes me as a person of above average intelligence who's tracking conversations and knows what's going on. I don't think he's medically unfit to be president. I think he's morally unfit to be president. A person who sees moral equivalence in Charlottesville, who talks about and treats women like they're pieces of meat, who lies constantly about matters big and small and insists the American people believe it, that person's not fit to be President of the United States, on moral grounds. Our president must embody respect, and adhere to the values that are at the core of this country. The most important being truth. This president is not able to do that. He is morally unfit to be president."

"I think it's possible. I don't know. These are more words I never thought I'd utter about a President of the United States, but it's possible," Comey told ABC News during a wide-ranging, five-hour long interview, a portion of which aired on Sunday evening, promoting his tell-all book "A Higher Loyalty," due out next week.

"I (would have) been able to say with high confidence about any other President I dealt with, but I can't. It's possible," Comey said.

Comey was fired by the President last year in the midst of the FBI's investigation into whether Trump's campaign associates colluded with Russia to influence the 2016 election.

When he was still FBI chief, Comey briefed Trump on the details of a dossier -- portions of which remain unconfirmed -- that was commissioned as opposition research during the 2016 election and compiled by a former British intelligence agent, Christopher Steele. The dossier contained salacious allegations about the President during a trip he took to Moscow in 2013.