US blames Iran for Gulf of Oman attack

The European Union is refraining from "speculations and premature conclusions" as it gathers information about the attacks in the Gulf of Oman, an EU spokesperson said.

“While we are gathering additional information and evidence and consolidating the elements available, we will refrain from speculations and premature conclusions," the spokesperson said in a statement.

The statement continued: "As we assess the situation, our call is again to show maximum restraint and to avoid escalation and provocations."

Meanwhile, the United States has blamed Iran for an attack on two tankers in the Gulf of Oman. Both President Trump and Secretary of State Mike Pompeo have said Iran is responsible.

US Secretary of State Mike Pompeo blamed Iran for an attack on two tankers in the Gulf of Oman, saying the assessment was based on intelligence, but presented no evidence to support his claim.

Pompeo spoke hours after the two tankers were attacked Thursday and less than a month after four other ships in the region were struck in what appears to be a similar way.

“It is the assessment by the United States government that the Islamic Republic of Iran is responsible for the attacks that occurred in the Gulf of Oman today," Pompeo told reporters at the US State Department.

Pompeo said the conclusion was based on "intelligence, the weapons used, the level of expertise needed to execute the operation."

Two tankers were apparently attacked in the Gulf of Oman Thursday, less than a month after four other ships were struck in the region.

The apparent attacks come at a time of tension between the US and Iran. In May, four oil tankers were attacked off the coast of the United Arab Emirates, an incident that the US suspected was the responsibility of Iran.

Tehran denied any involvement in the earlier attacks. Iran's Foreign Minister Mohammad Javad Zarif suggested that the US was quick to make allegations "without a shred of evidence."

The crew of the Norwegian tanker Front Altair — one of the two attacked in the Gulf of Oman yesterday — is “safe and doing well," the company that owns the ship said in a statement on Friday.

The company, Frontline, said the crew is heading to the Iranian city of Bandar Abbas.

Here's the full statement from Frontline:

Frontline reports that all 23 crew members of the ‘Front Altair’ are safe and doing well. Following their disembarkation from the Iranian naval vessel at the Iranian port of Jask the crew are on their way to Bandar Abbas prior to repatriation.
Families are being kept informed of the situation.
The fire on the ‘Front Altair’ has been extinguished since last night and boundary cooling continues on the tanker which is stable at position 25 deg 17.2 N x 057 deg. 30.8 E.
One further salvage tug is expected on scene with an ETA of 1300 hours today, June 14 equipped with salvage fire-fighting and towing capability.
A further specialist team which consists of full salvage team and ship management personnel is expected to arrive 15 June for full assessment of the damages.
There is currently no reported pollution from the vessel.
Further information will be provided as it becomes available. 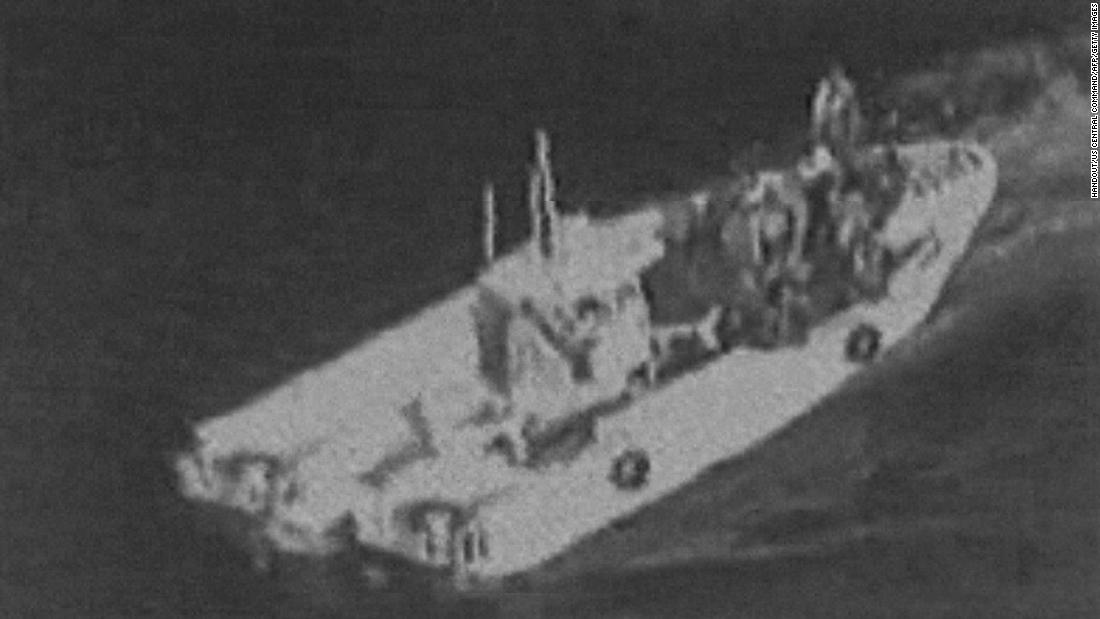 The United States has blamed Iran for an attack on two tankers in the Gulf of Oman, releasing video footage that it claims shows an Iranian patrol boat removing an exploded mine from one of the vessels' hulls.

In the video, a smaller boat is shown coming up to the side of one of the two attacked tankers. An individual stands up on the bow of the boat and can be seen removing an object from the tanker's hull. The US says that object is likely an unexploded mine.

A senior diplomatic source of a US ally told CNN Friday, "It is a virtual certainty Iran was behind this latest attack. The video now nails it."

How Trump is reacting: "Iran did do it, and you know they did it because you saw the boat," the President said during a phone interview on Fox and Friends Friday morning, referring to the video.