Pete Buttigieg's campaign's burn rate was 135% in the fourth quarter, with the campaign spending $34 million on primarily their organization in the first four states.

Buttigieg told CNN on Monday that they are making a bet that their performance in these first four states — especially Iowa — would be do or die for his campaign.

"These early states are absolutely critical. It's one thing to campaign for a year talking about why we believe we're the best campaign to go out there and beat Donald Trump," Buttigieg said. "This is our first chance to begin to prove it. And it all starts with the caucuses."

The campaign is keenly aware that they need to quiet concerns about electability by finishing strong in Iowa. According to conversations with multiple aides, the objective was not necessarily to finish in first place, but rather to show that they are a viable alternative to both Joe Biden and Bernie Sanders. With the results coming in a day after the caucuses, his aides feel confident that they beat their own expectations.

But even while campaigning in Iowa, Buttigieg began pivoting to answer the other lingering question: his lack of support among black voters.

At his final rally of the Iowa campaign, he was joined on stage by a number of black surrogates, including Rep. Anthony Brown, Miss Black America Ryann Richardson, and the only two black mayors of Iowa cities.

At his election night speech, Buttigieg was introduced by Brown and the head of South Bend's Democratic Party Gladys Muhammed.

While Pete Buttigieg is the initial leader in Iowa when it comes to state delegates, Bernie Sanders is leading in the popular vote.

This is the first year Iowa Democrats have released the popular vote for both the first and second rounds of the caucuses.

The first round – or the first alignment — is the number of people who first supported a candidate at the start of the caucuses last night. After that first round, viability was determined (typically, a candidates needs 15% of voters to be viable).

But remember: While the popular vote is interesting, it does not determine who wins Iowa, CNN's Wolf Blitzer explained.

"It is the state delegates who will determine the winner of the Iowa caucuses," he noted.

Here's a look at the popular vote for the first and final rounds with 62% of precincts reporting:

The other two numbers reflect the raw vote totals:

"Official verified caucus results are coming in from the state of Iowa. They're not complete, but results are in from a majority of precincts, and they show our campaign in first place," he told supporters.

Buttigieg, who got emotional at one point, went on to say:

“So, we don't know all of the numbers, but we know this much. A campaign that started a year ago with four staff members, no name recognition, no money, just a big idea, a campaign that some said should have no business, even making this attempt has taken its place at the front of this race to replace the current president with a better vision for the future. And no matter what happens next. This much is undeniable that fact represents an astonishing victory for this campaign. This candidacy and this vision that you all have been a part of."

Pete Buttigieg’s campaign is cautiously optimistic after the first tranche of results find the former South Bend Mayor with a narrow lead with 62% of results in.

“We feel good,” said a senior Buttigieg aide. “We’re confident our data will continue to show we’re competitive to win.”

Buttigieg aides in Iowa spent the night crunching internal data they received from their precinct captains across Iowa. It is that data that motivated them to claim victory before any results were in.

With 62% of precincts reporting, former Vice President Joe Biden is in fourth place, with just 15.6% of the vote. He's leading in only six counties.

CNN's John King noted that Iowa "was never Joe Biden country," and the former vice president has been anticipating doing better in states like South Carolina.

Still, it's notable that Pete Buttigieg, the former mayor of South Bend, Indiana, is initially leading in Iowa.

Here's how King explained it:

With 62% of Iowa precincts reporting, Pete Buttigieg is leading with 26.9%. Bernie Sanders is in second with 25.1%.

Here are the top four candidates: 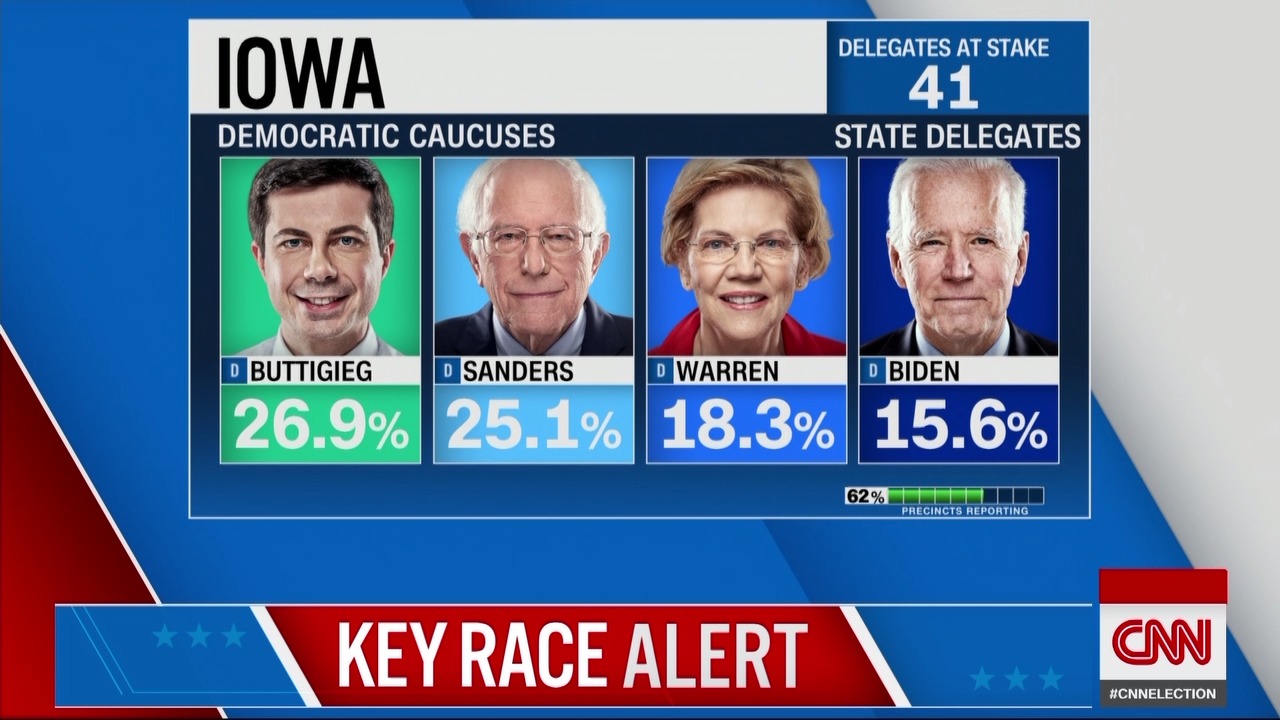 Iowa Democratic Party Chair Troy Price blamed the issue on a “coding error” with the app they planned to use to report the numbers.

“We have been working day and night to make sure these results are accurate,” he said.

Price took a handful of questions during the media availability, which happened minutes before the first batch of results was released. Mandy McClure, spokeswoman for the communications director, wanted Price off the stage quickly, trying to cut him off after two or three questions.

Price declined to engage in whether the chaos around the caucus would lead to Iowa losing its first status.

“The fact is that this is a conversation that happen every four years,” Price said.

Price also said that he had “no knowledge” of the Department of Homeland Security offering to review the app the party planned to use.

An aide to Democratic Sen. Ron Wyden sent three emails to the Democratic National Committee's head of cybersecurity last month raising concerns about the app that was used in Iowa. The emails, which were obtained by CNN, went unanswered.

On Jan. 14, the aide linked to a news story about the app and asked the DNC Chief Security Officer Bob Lord, “Bob, Where can we find out more information about this app that they’re going to use for the Iowa caucuses?”

“In particular, we’d like to find out if anyone has audited it,” the aide wrote.

On Jan. 17, the aide followed-up and said “Checking again.”

The final email was sent on Jan. 21: “Bob, If there is someone else I should be reaching out to, please let me know.”

Wyden’s office did not ask the Iowa Democratic Party directly about the app.

In a statement, Wyden today:

“My warnings about this technology were ignored, and the result is chaos and a loss of confidence in our elections. Unless states step back from using unproven technologies in our elections this will keep happening.”

CNN has reached out to the DNC for comment.