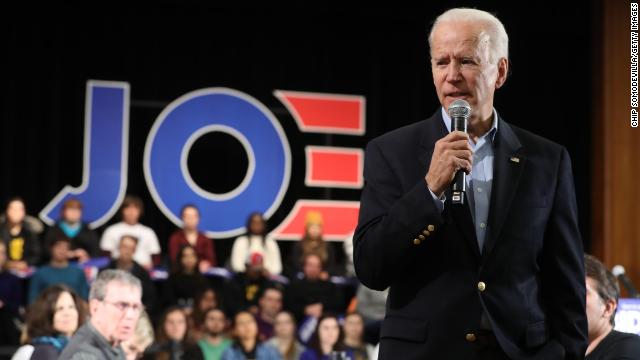 Joe Biden played the role of pundit after his event in Mount Pleasant, Iowa, answering questions from CNN about what a second, third or fourth place finish in Iowa would mean for him.

“Well there’s a big difference between second and fourth,” he said.

I’ve been saying from the beginning I think we’re gonna do well here. I think it’s gonna be really tight no matter how it works out. It’s been bunched up, it’s gonna remain bunched up I think.”

He added, “I view this as, you know, four sets here. I really mean it. I think that the two caucuses and the two first primaries -- I view them as a package, and how you come out of there I think is gonna determine what your shots are. So I feel good about it.”

Biden then argued that Iowa isn’t “as consequential” as years past, noting that his metric of success is whether a candidate can “represent every aspect of the Democratic Party.” He labeled Iowa a “toss up” and described New Hampshire as a “real uphill race”

“I just think it’s a different year in that I think the measure, you all won’t do it now, and I don’t mean it in a bad way, but I think what you’re going to have to measure is who can represent every aspect of the Democratic Party. And that’s why I think it matters how you – it’s not as consequential in one sense as it has been in years past. Because I feel very strongly that we have a great firewall in South Carolina. I think we’re in a position where we’ll do very well in Nevada, I think it’s gonna be a real uphill race as it always is for a non-New Englander in New Hampshire. And I think it’s gonna be just a toss up here. It has been all the way along,” he said.

Biden continued: “But look, I’m not being a pundit about it – you guys will make those judgments about it. I’m not being a wise guy, but it’s about, I think, the party understand and folks understand that you gotta be able to represent the whole country."