Sanders’ foremost national supporter and surrogate will likely be at home in New York on Monday night, watching the results come in with no small amount of interest.

So what, specifically, will she have her eye on?

And no, she does not have a “Bernie wins” tweet saved in her drafts.

"Oh, no, I largely don't draft my tweets too far in advance,” she said. “I'm too superstitious for that." 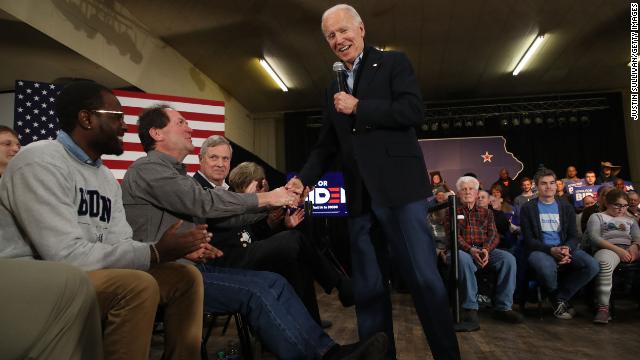 DUBUQUE, IOWA -- Former Vice President Joe Biden seemed to downplay his chances of winning in Iowa to precinct captains on a training call Sunday afternoon, saying that he believes it's a "toss-up" heading into Monday's caucuses.

"But I really believe that it’s a toss-up heading into Monday night and the candidate with the best organization is gonna emerge as the winner. And I realize it’s my responsibility but I mean if I don’t win it won’t be because of you guys. It will be if I win, it will be because of you all," he said on a call which CNN obtained access to.

Hopping on the call as a "surprise guest" from the car after his Dubuque event, Biden made a Super Bowl analogy, saying, "I just wanted to say we’re in a red zone here. I know the Super Bowl is today. We’re at the 10-yard line and you know, a touchdown is the only way to win this thing right now."

He asked the leaders on the call for one final push Sunday.

"Now look. I know it’s Super Bowl Sunday but I need everybody to make, a heck of a thing to ask, but to make one more big push this afternoon and tomorrow," he said.

Biden said that if he wins Iowa, he believes it will be "smooth sailing" from here on out. He also noted that if it's viewed as a "tie with two or three people at the top of the ticket," then "we're clearly in the game," marking confidence in performing well in the following early voting states.

"I really believe we can but if we get out of Iowa with a win, I think it’s gonna be not clear sailing but overwhelmingly smooth sailing from here on. But if we get out of here basically viewed as a tie with two or three people at the top of the ticket, I think we’re clearly in the game. And you know, the next three primaries – one primary and one caucus – I feel really good about.

Sens. Elizabeth Warren, Bernie Sanders, Michael Bennet and Amy Klobuchar will all return to Washington, DC, to be present Monday during the Senate impeachment trial of President Donald Trump.

According to a campaign aide, Sanders will return to the nation’s capital Sunday night and return to Iowa on Monday afternoon to watch the results of the caucuses with supporters. Warren will likely go back to DC Sunday evening and also return to Iowa by Monday night for the caucuses, a Warren aide told CNN.

Bennet, a Colorado Democrat who was campaigning in New Hampshire over the weekend, will fly to Washington for the Senate impeachment trial and return to the Granite State on Monday night during the caucuses, according to spokeswoman Shannon Beckham.

Klobuchar, after a brief showing at her Super Bowl party in Iowa, is flying to the nation's capital to be in attendance for the trial Monday. She said she plans to be back in the Hawkeye State for the anticipated caucuses.

The Senate approved a resolution Friday evening from Senate Majority Leader Mitch McConnell laying out the final steps for the trial. The resolution includes closing arguments of two hours each for the House managers and the President's legal team starting at 11 a.m. on Monday, the ability for senators to deliver their own speeches explaining their votes, and Wednesday's final vote.

Here’s a look at the ad spending in Iowa by the 2020 candidates. The spending dollars are from January 1, 2019, through this week.

Campaigning in Coralville, Iowa, Pete Buttigieg has scored the endorsement of Iowa City Mayor Bruce Teague. The mayor said he heard Buttigieg speak at an LGBTQ forum in Cedar Rapids, Iowa, in September, where he “realized this was an opportunity of a lifetime, for someone to be to LGBTQ+, a part of that family, on the national stage.”

Teague told supporters in Coralville that while he had initially supported New Jersey Sen. Cory Booker, “my second choice has always been Mayor Pete, and today, publicly, I am endorsing Mayor Pete to be the next President of the United States of America!”

“I don’t know if you know this, but I’m black,” Teague told the audience, to applause. “Mayor Pete, when we look at the history of what he’s done at making sure diversity is equal, not just for people of color, but for women, we’re talking about someone that looks out for the little people, the least of them.”

Teague also told Iowans gathered Saturday morning that the former mayor of South Bend, Indiana, appealed to him as a gay man. “I don’t ever really go around announcing. I’m black, because you can see that, and just like you don’t announced that you’re heterosexual, if you might be that, I don’t go around, but I want to say this, I want to say this because it’s important," Teague said. "When we think about Mayor Pete, and we’re talking about electability, this is a man who can relate to everybody.”

After the forum, Teague likened the feeling of Buttigieg running to the one he felt when Barack Obama ran for president.

"The feeling that Obama, that I had when Obama ran, I can tell you that it's a similar feeling for someone like me, who is of the LGBTQ+ community, and I'm still living the oppression of being an LGBTQ+, member," Teague said. 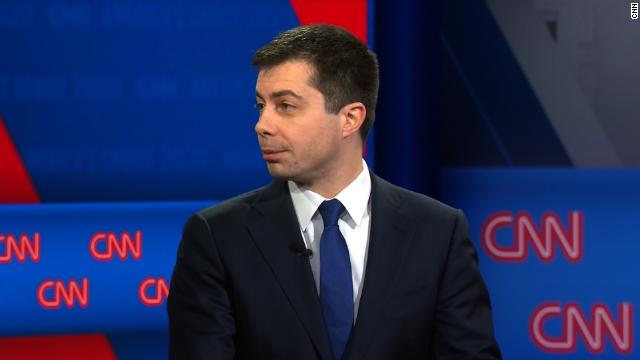 Buttigieg has repeatedly argued that the best way for him – a 38-year-old former mayor from South Bend, Indiana – to prove he could take on President Donald Trump is to post a strong showing in Iowa, something his team views as a top two finish or anywhere above former Vice President Joe Biden.

“Let’s face it,” he told NBC on Sunday, “I need to have a good finish here in Iowa.”

But Buttigieg needs a “good finish” for money purposes, too.

The former mayor’s campaign, a source close to the Buttigieg campaign tells CNN, is pouring as much money as fiscally responsible in Iowa hoping that a strong finish legitimizes Buttigieg’s electability arguments and causes an influx of campaign cash.

The campaign has spent over $10 million on television, digital and radio ads in the state, a figure only slightly behind billionaire Tom Steyer and Vermont Sen. Bernie Sanders. And Buttigieg’s staff in the Hawkeye State has been around roughly 170 people in 34 statewide offices for weeks.

“Our strategy since the summer is to use Iowa as a launching pad,” the source said. “Electoral success is essential to show, not tell, for Pete, and that means that we focused resources accordingly.”

And Buttigieg’s quarterly report from the Federal Election Commission – which found Buttigieg entered 2020 with $14.5 million in the bank but spent 135% of the $25 million he raised in the final three months of 2019 – reflects that effort.

“We don’t want to finish poorly and have millions left in bank,” the source, who requested anonymity to speak openly about campaign strategy, said. “Super Tuesday is resource intensive and we’ll need to raise the revenue to be competitive.”

Buttigieg is not the first candidate to attempt this. Then-Sen. Barack Obama raised substantial money in 2007, ahead of the Iowa caucuses. But like Buttigieg, the Obama campaign poured tens of millions in the state, hoping that a win would help him replenish his campaign coffers.

This strategy is one reason Buttigieg has already scheduled two fundraising swings in the weeks following Iowa, including a swing through New York City in the days before the caucuses and New Hampshire primary and then a swing through Northern California for at least four events before the Nevada caucuses.

Read more on this story here.

And read the full statement below.

The sign-up sheet includes basic questions like the age of the child or children, when they typically go to sleep and whether they have any dietary restrictions, allergies or health issues.

Warren’s caucus night offer comes with an agreement and waiver, which asks parents or caretakers to sign off on their kids’ potentially watching a “movie or video, rated G or PG or equivalent” and an OK to keep them up past their bedtime.

Other terms and conditions include a promise that any little ones left in the campaign’s care aren’t sick and that any drop-offs include all necessary supplies, like diapers. And about that favorite toy? A warning: It could be lost or broken.

At the end, one final request: “Talk to your child(ren) about the importance of democracy and why we love Elizabeth Warren!”

Warren’s campaign introduced a universal childcare plan last February, along with a calculator that allowed voters to see how much they would save if the program were enacted.

“The difficulty of accessing affordable and high-quality child care puts parents in a bind — forcing them to choose between breaking the budget, cutting back work hours, or settling for lower-quality care,” Warren wrote in a Medium post.

IOWA CITY—Elizabeth Warren responded to the booing of Hillary Clinton by Democratic Rep. Rashida Tlaib by calling for party unity on Saturday evening as the best offense against Donald Trump.

When asked by CNN’s MJ Lee whether she would discourage that kind of behavior in this primary season, Warren replied that in the primaries “people can get heated.”

“What’s important is we come together as a party. Because we have one really important job, and that is to beat Donald Trump,” Warren said. “Our best chance to do that is when Democrats work together, when we get out there and fight for the things we believe in and we bring as many people as possible into our party to do that.”

Pressed on whether she believed colleagues should not engage in behavior like booing, Warren added that she “would like to see everybody get together here.”

“That’s how we beat Donald Trump and that’s what’s critically important,” she said.

Warren brushed off a question about she would attribute a possible poor showing in Monday’s Iowa caucuses to the fact that she’s been stuck in Washington for Trump’s impeachment trial.

“Look, I am here right now in Iowa reaching out to everyone as best I can,” Warren replied. “This is such an incredible opportunity to be able to meet so many people face to face. That’s what democracy should be all about and I’m doing my best here.”

She also expounded on her recent remark to a reporter that earlier in the campaign was not the right time to address voters’ worries about bias toward a female nominee.

“I think now is the moment because people have started asking,” Warren said, referring to questions about the electability of a female candidate. “When someone says I’m worried because – although I would vote for a woman – I’m worried whether others would, then I think the best way to deal with that is you deal with it head on.”

The Massachusetts senator said that she always starts with “what the numbers show.”

“I think it’s important,” she added. “I don’t want to shy away from any issue like that.”