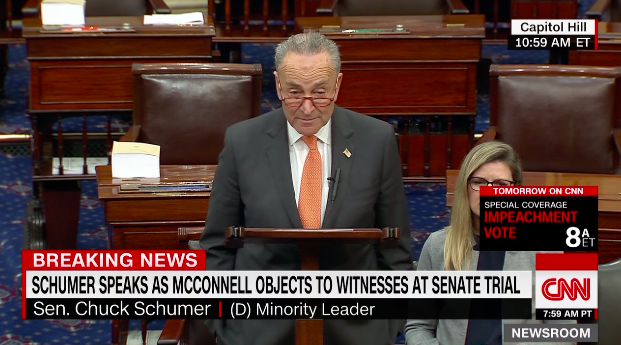 Schumer argued that "the House has built a very strong case against the President."

“A fair trial is one that allows senators to get all the relevant facts and adjudicate the case impartially," Schumer said on the Senate floor. "There’s a grand tradition in America, speedy and fair trials. We want both."

Moments ago, Senate Majority Leader Mitch McConnell rejected calls from Schumer to allow at least four witnesses at an expected Senate impeachment trial. Schumer accused McConnell of prioritizing a "speedy" trial over a fair one.

“The leader seems obsessed with speedy and wants to throw fair out the window. To simply repeat the arguments that were made in the House and Senate when there are witnesses and documents that could shed light on what actually happened, why not have them?” he asked.

The House Rules Committee is scheduled to meet at 11 a.m. ET to approve the parameters for tomorrow's floor debate on the articles of impeachment.

Here's what we know about today's session:

Senate Majority Leader Mitch McConnell, addressing Senate Democrats' request for witness testimony during the possible impeachment trial, said the Senate is not the place to investigate.

The House is the legislative body that is tasked with building the case against the President, he said.

"If they fail, they fail. It's not the Senate's job to leap into the breach and search desperately for ways to get to guilty. That would hardly be impartial justice," McConnell said.

He then referenced Senate Minority Leader Chuck Schumer's proposal to hear from at least four witnesses at the trial. The House had moved ahead with the impeachment inquiry without some of the testimony, saying the process of waiting on court decisions could take months.

"The fact that my colleague is already desperate to sign up the Senate for new fact finding — which House Democrats themselves were too impatient to see through — well, that suggests something to me," McConnell said. "It suggests that even Democrats who do not like this President are beginning to realize how dramatically insufficient the house's rushed process has been."

"Well, look, I hope the House of Representatives sees that too. If House Democrats' case is this deficient, this thin, the answer is not for the judge and jury to cure it over here in the Senate. The answer is the house should not impeach on this basis in the first place." 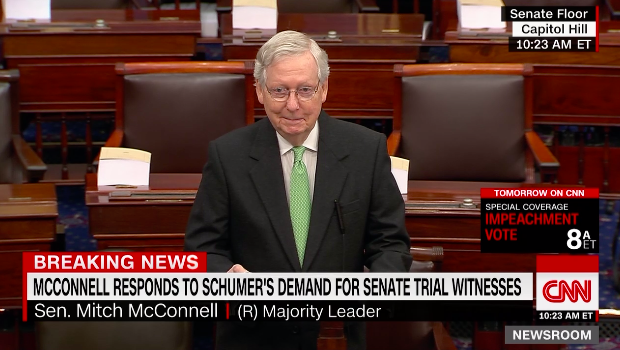 In a speech on the Senate floor moments ago, majority leader Mitch McConnell appeared to suggest Sen. Chuck Schumer was "coordinating" with others when the Democratic minority leader requested this week that four White House witnesses testify at Trump's impeachment trial.

"So why does the Democratic leader here in the Senate want to predetermine the House impeachment managers' witness request for them before the House has even impeached the president?" McConnell said. "Might he just might he be coordinating these questions with people outside the Senate?"

Keep in mind: McConnell himself said last week that he is "coordinating" with the White House on how to approach a potential impeachment trial. McConnell told Fox's Sean Hannity that there will "be no difference between the President's position and our position as to how to handle this." Schumer called these comments by McConnell "totally out of line."

Senate Majority Leader McConnell is speaking on the Senate floor as the impeachment proceedings continue.

McConnell, according to a copy of his prepared remarks, will say that the House is tasked with investigating possible impeachable offenses, and the Senate has the duty to judge them.

Some background: Top Senate Democrat Chuck Schumer has requested testimony from at least four witnesses at the looming impeachment trial.

"We don’t create impeachments," he'll say. "We judge them."

Democratic Rep. Mikie Sherrill, a moderate from New Jersey, put out a statement this morning that she's a "yes" on impeachment.

"My military service taught me to put our country — not politics — first, and my time as a federal prosecutor taught me about the importance of the rule of law and of justice," Sherill said. "I will be voting in favor of the Articles of Impeachment."

Sherrill's declaration that she's planning to vote to impeach Trump comes one day after another moderate from a swing district, Rep. Elissa Slotkin, a Democrat from Michigan, announced that she plans to vote yes on both articles of impeachment.

House Intelligence Chairman Adam Schiff was just asked about Rudy Giuliani comments about telling Trump he wanted Marie Yovanovitch out because she was getting in the way of the investigations they sought.

“The plot continues ... the effort to secure foreign interference in our elections hasn’t stopped. ...what I found most striking about Giuliani’s comments was the admission, confession that they needed to push Yovanovitch out of the way because she was going to get into the way of these corrupt investigations that Giuliani was pushing.”

While he criticized Giuliani’s “daily admissions of guilt,” he said he would place a “higher priority” on the Senate securing testimony of acting White House chief of staff Mick Mulvaney, national security advisor John Bolton and others — not Giuliani.

He also called on senators to demand the documents in the Senate trial that the White House has withheld.

“I think every senator is going to have to answer the question: do they want to see the facts or are they just going to sweep it under the rug?" he asked. 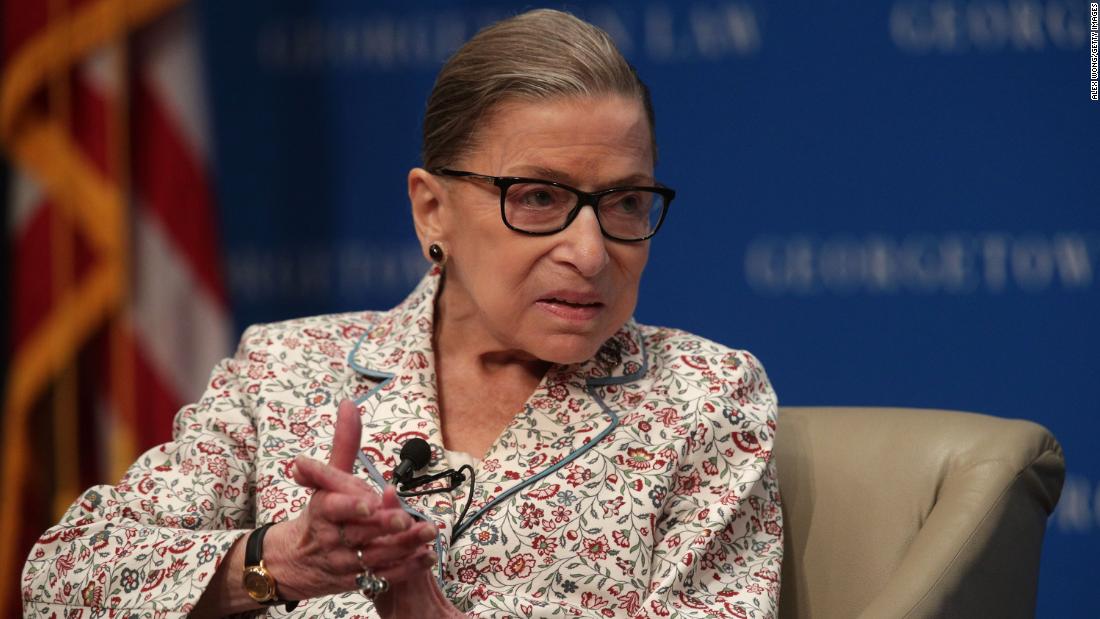 She said the Senate’s role is to be the triers.

“We have a process to select jurors. If a juror reveals a bias they will be disqualified,” Ginsburg said when asked if they should be impartial.

Her comments come as Senate Majority Leader Mitch McConnell faces backlash for coordinating with the White House on the looming impeachment trial.

She was also asked for her thoughts on President Trump’s assertion that the impeachment process should stop.

“The President is not a lawyer, he's not law-trained," she said. "But the truth is the judiciary is a reactive institution. We don't have a program or an agenda.”

Ginsburg made the remarks at The New York Public Library while receiving the Berggruen Institute Prize for Philosophy and Culture.