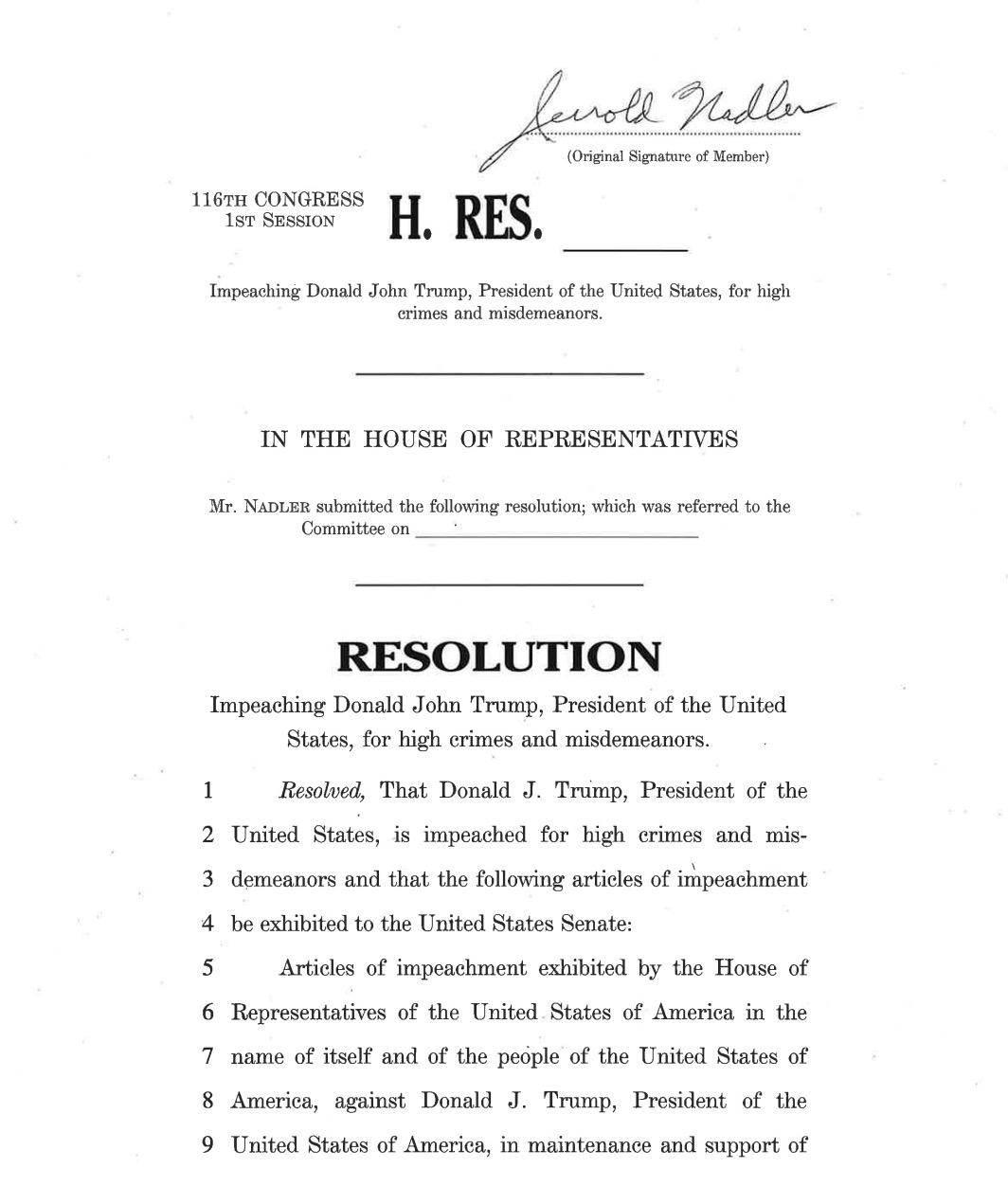 You can read the full articles here. 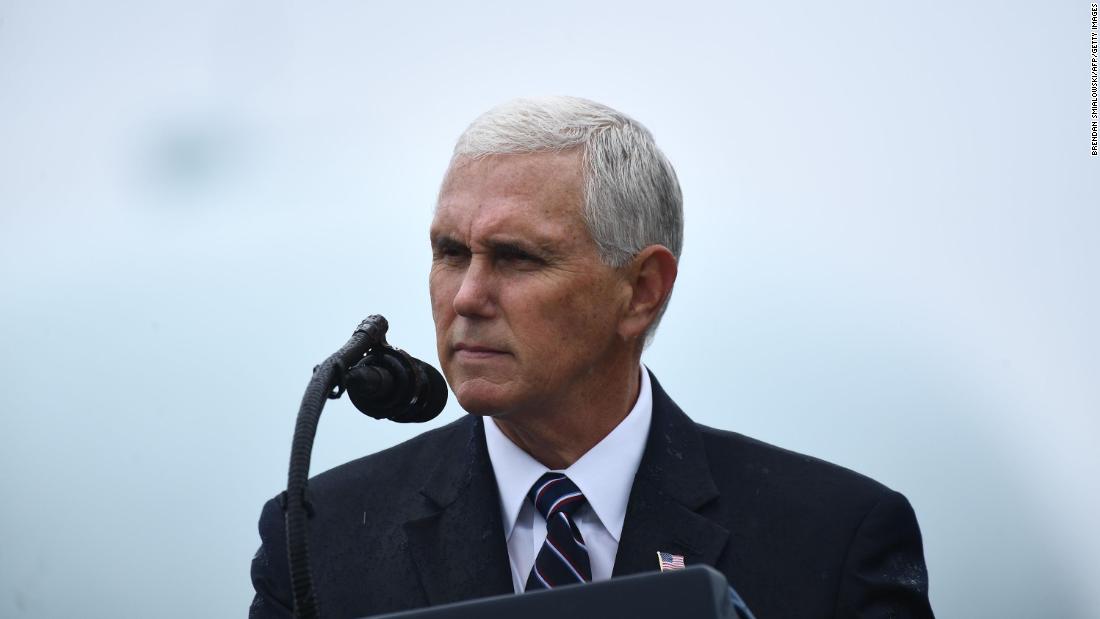 Vice President Pence made his first comments on impeachment since the articles were introduced this morning, calling the impeachment inquiry a “disgrace."

He said the articles were created by Democrats “because they know they can’t run against this President in 2020.”

“You’ll see in the headlines today they’re back at it again. I mean it’s really amazing. And what’s happening in Washington, DC today is a disgrace. It’s nothing short of a partisan impeachment but men and women of Pennsylvania — we’re still winning,” Pence said in Pennsylvania Tuesday while speaking at an event for veterans.

Several House Judiciary Democrats, including Reps. Eric Swalwell, Karen Bass, David Cicilline and Pramila Jayapal all defended their decision not to include an article on obstruction of justice.

Their argument: That abuse of power is so all-encompassing that it covers President Trump’s pattern of behavior. They also said they want to focus on the areas with the most consensus within the Democratic caucus.

Rep. Jayapal said they want to present “the strongest possible case to the Senate,” which is why they chose the two articles.

Today marks the 78th day since Speaker of the House Nancy Pelosi announced the impeachment inquiry into President Trump.

Remember: While Democrats unveiled articles of impeachment against Trump this morning, there are still a lot of steps ahead in this process. Now, the Judiciary committee — and then the full House — must vote on the articles. If approved, Trump will face a trial in the Senate, which will decide if he should be removed from office.

So how much longer will this take? Possibly weeks or months more.

Here's a look at how long it took for the other three US presidents who faced impeachment:

House Foreign Affairs Chairman Engel said that adding an obstruction of justice charge to the impeachment articles would have been a “mixed bag of tricks."

He said such a charge didn’t have broad consensus in the caucus — and could've been tough to get the votes.

What this is about: Earlier, today, Democrats unveiled two articles of impeachment against Trump: Abuse of power and obstruction of Congress.

They has debated adding a third article of impeachment on obstruction of justice, which would have captured the allegations against Trump that were detailed in former special counsel Robert Mueller's investigation.

But House Speaker Nancy Pelosi and her top lieutenants ultimately decided to keep the articles focused narrowly on Ukraine, out of concern for moderates who only backed an impeachment inquiry once the Ukraine scandal spilled into public view.

House Judiciary Committee members spoke to reporters after the Democratic caucus meeting. Rep. Karen Bass, a Democrat from California, said she was not disappointed that an obstruction of justice article was not introduced.

“I think the two articles are very strong, and I think the especially the obstruction of Congress is general," Bass said.

“Impeachment is something that we’re being forced to do, nobody is excited about this, if we weren’t concerned that we have no way of knowing if the President will continue to interfere in our elections, it leaves us no choice."

Rhode Island Democratic Rep. David Cicilline said the articles both represent a pattern of abuse from the President. He said there’s broad consensus within the Democratic caucus for these articles.

Rep. Sheila Jackson Lee, a Democrat from Texas, said the introduction of articles of impeachment and upcoming votes on them will be decisions of “moral conscience.”

Rep. Val Demmings, a Democrat from Florida, said, “Impeachment is a political tool to hold the President accountable, so I feel very good. I feel good about the work of the Intelligence Committee and the Judiciary Committee. I feel good for the American people who have to obey the law and follow the law every day.”

“Nobody is above the law,” she said.

About an hour after revealing articles of impeachment against President Trump, House Speaker Nancy Pelosi and other Democratic House members announced that they have reached an agreement with the White House on the USMCA trade deal.

"This is a day we've all been working to and working for on the path to "Yes,"" Pelosi said at a press conference to announce the deal.

White House Press Secretary Stephanie Grisham released a statement following the news the morning that Democratic leaders will bring two articles of impeachment against President Trump: abuse of power and obstruction of Congress.

“The announcement of two baseless articles of impeachment does not hurt the President, it hurts the American people, who expect their elected officials to work on their behalf to strengthen our Nation," she said in a statement.

"The President will address these false charges in the Senate and expects to be fully exonerated, because he did nothing wrong," Grisham said.

The President is lashing out on Twitter following Democrats' announcement unveiling articles of impeachment against Trump.

In two tweets, Trump wrote "WITCH HUNT!" and called the Democrats' accusations against him "ridiculous" and "not true."

What Trump's talking about: The President is likely referencing his July 25 call with the President of Ukraine.

Democrats say the July 25 timeline provides a damning account of presidential abuses of office. Trump maintains his behavior was "perfect." You can read more about what we know about that day here.