House Intelligence Committee Chairman Adam Schiff, who is leading the impeachment inquiry along with House Judiciary Chairman Jerry Nadler, would not say today explicitly whether he supports including information from the Mueller report in articles of impeachment, but seemed to indicate he does not.

"I can tell you as a former prosecutor it's always been you know, my strategy, in a charging decision, and an impeachment in the House is essentially a charging decision, to charge those that there's the strongest and most overwhelming evidence, and not try to charge everything even though you could charge other things," he said in interview on CBS' "Face The Nation."

Schiff later added: "I think we should focus on those issues that provide the greatest threat to the country."

Sen. Chuck Schumer called for key witnesses to testify and documents to be released in the impeachment inquiry when approached at an unrelated press conference in New York today.

Schumer also mentioned that Senate Majority Leader Mitch McConnell has not been in touch with him.

"Nope, he has not. I have said to him, 'I'm ready to discuss it and when you're ready to discuss it, when you're ready come to me’ and he hasn't yet. I hope that we can come to a bipartisan agreement, and I hope we can come to allowing a full and open trial. In other words, there are key witnesses who have not testified, there are key documents that haven't come forward. I think it's only fair to the American public and to everybody that these be allowed," Schumer said.

More on the lack of testimonies: House Intelligence Chairman Adam Schiff has repeatedly called on acting White House chief of staff Mick Mulvaney and others to comply with congressional subpoenas and testify before Congress in the impeachment inquiry. 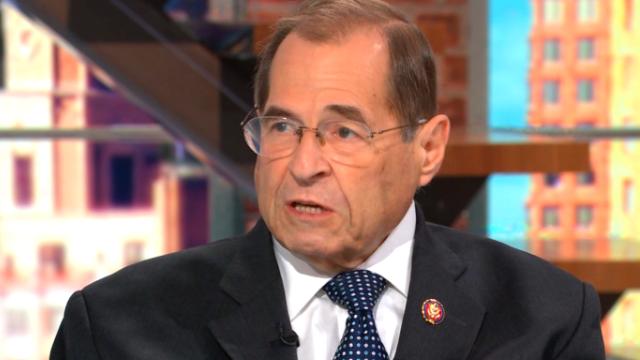 The House Judiciary Committee yesterday released a report ahead of Monday’s impeachment hearing laying out historical arguments for impeachment.

With sources telling CNN a vote in the Judiciary Committee to impeach President Trump expected as soon as this week, House Judiciary Chairman Jerry Nadler today told CNN’s “State of the Union” he sees the Ukraine evidence as part of “a pattern” of conduct by President Trump.

Nadler would not commit to including the evidence of obstruction of justice included in the Mueller report as part of the articles of impeachment.

Trump has denied he obstructed justice.

He said decisions on exactly what will be included in the articles of impeachment will be made after Monday’s Judiciary Committee hearing in which evidence from the Intelligence Committee will be presented.

“We’re going to have to take a lot of considerations into account. What is the level of proof of the various allegations. How do they relate to each other? What is the level of support in our caucus and in the House for them? What we might persuade the Senate of. All of these things have to be taken into account, realizing again that the central allegation, it’s all of a pattern,” Nadler told CNN Chief Political Correspondent Dana Bash on “State of the Union.”

But when pressed on why one would not assume the Mueller evidence being included given his statements regarding a pattern of behavior by Trump, Nadler responded “I wouldn’t draw any conclusions. It is part of the pattern.”

The chairman said he did not have doubts about the strength of the evidence that Democrats have that prove impeachable offenses were committed and when asked if it was confident it showed the President directing some of the activities he said “yes, yes…we have a very rock solid case.” Nadler said if it was presented to a jury “it would be a guilty verdict in three minutes flat.”

Lawmakers on Capitol Hill continue to work on the impeachment inquiry into President Trump.