Chairman Jerry Nadler has released the names of the counsels to the House Permanent Select Committee on Intelligence and the House Judiciary Committee who will present in the ongoing impeachment inquiry into President Trump.

House Committee on the Judiciary

Monday’s hearing will begin at 9 a.m. ET and will proceed in two phases. First, majority and minority counsel for the Judiciary Committee will present opening statements for up to one hour, equally divided.

The House Judiciary Committee today released a report ahead of Monday’s impeachment hearing laying out historical arguments for impeachment.

While the White House indicated today that it wouldn’t take part in the impeachment proceedings, Republicans members of the House Judiciary Committee formally requested witnesses that President Trump and his allies have been pushing to testify, according to a copy of the letter sent to committee chairman Jerry Nadler.

Collins wrote that the committee should call “each of the witnesses listed above to testify before this Committee to ensure a full evaluation of the facts and to cure the procedural and fairness defects injected into these proceedings by Chairman Schiff.”

Collins requested that subpoenas be issued for all of the witnesses they had requested besides Schiff.

Many of these witnesses were also requested by Republicans during the House Intelligence Committee hearings.

Democrats blocked those requests, which Schiff dismissed as an attempt to "undertake the same sham investigations into the Bidens or 2016 that the President pressed Ukraine to conduct for his personal political benefit.” 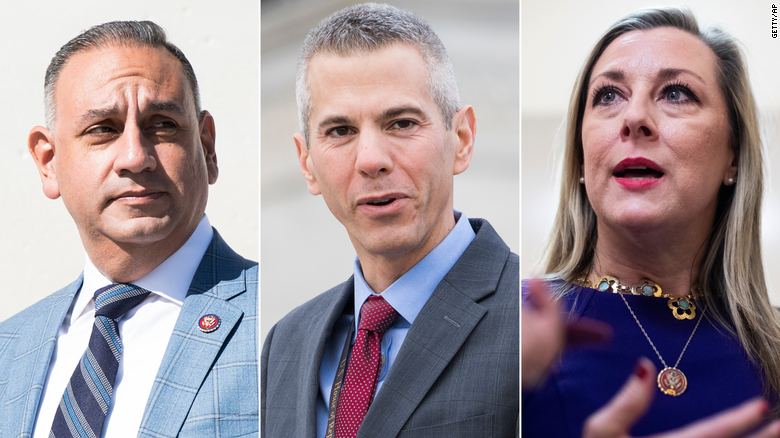 As the House Judiciary Committee held its first impeachment hearing into President Trump this week, some of the House's most vulnerable Democrats privately huddled to discuss how to protect their majority.

At the headquarters of the House Democrats' campaign arm, they talked about what they were hearing back home and were briefed on an internal poll surveying 57 battleground districts from October to November, according to a source familiar, which showed support for impeaching and removing Trump had stayed about the same ? slightly trailing the opposition ? despite a Republican onslaught. While independents had surged to support it, Republicans had rallied around their party leader.

While the polling was meant to reassure Democrats from highly competitive districts, they are still uneasy about the historic vote they're about to cast, which could have major ramifications for the country and their races.

"I'm totally undecided," Rep. Anthony Brindisi of New York, a freshman from a competitive district who had initially resisted an impeachment inquiry, said Friday. "Anytime you talk about impeaching a president -- the third time in our nation's history -- that's a very serious vote. I take it very seriously."

The day after the briefing, Speaker Nancy Pelosi announced the House would proceed with articles of impeachment, setting up a vote that will present a tricky choice for the 31 Democrats in Trump districts.

Hours later, Brad Parscale, the Trump campaign manager, tweeted that "impeachment is killing" freshman House Democrats ? "and polling proves it." He then tweeted an internal poll showing that in Oklahoma Rep. Kendra Horn's district, less than half of respondents support impeachment ? a surprisingly high number there, but one that still showed that a slim majority of her constituents did not want her to vote to impeach the President.

Like many other Democrats in red districts, Horn told CNN that she's still deciding on how to vote, waiting to see "all the information," including how the articles of impeachment will be written.

Democrats say Trump put his personal interest over the country's when he pressured Ukraine to announce politically-damaging investigations of Democrats, while using military aid and a White House meeting coveted by Ukrainian leader Volodymyr Zelensky as leverage.

Some Democrats hope that their colleagues do not expand the articles further, or include episodes of alleged obstruction of justice found in the Mueller report in the articles.

Rep. Jerry Nadler, the chairman of the House Judiciary Committee, responded to the White House's refusal to participate in the House impeachment inquiry today, saying “If the President has no good response to the allegations, then he would not want to appear before the Committee."

President Trump's administration declined to participate in the impeachment inquiry this afternoon, calling the probe "completely baseless" and a "reckless abuse of power" ahead of a deadline set by House Democrats.

Nadler, a Democrat from New York, said he believes that Trump's decision means "he cannot claim that the process is unfair."

"The President’s failure will not prevent us from carrying out our solemn constitutional duty," the chairman added.

"The American people deserve answers from President Trump. The House invited, and then subpoenaed, his top advisors. The President ordered them not to show and continues to block key evidence from Congress. We are disappointed that the President has once again failed to provide those answers here. We gave President Trump a fair opportunity to question witnesses and present his own to address the overwhelming evidence before us. After listening to him complain about the impeachment process, we had hoped that he might accept our invitation.
If the President has no good response to the allegations, then he would not want to appear before the Committee. Having declined this opportunity, he cannot claim that the process is unfair. The President’s failure will not prevent us from carrying out our solemn constitutional duty.”

Rep. Adam Schiff, the chairman of the House Intelligence Committee, has asked Vice President Mike Pence to declassify the contents of his Sept. 18 call with Ukrainian President Volodymyr Zelensky.

Schiff sent a letter requesting the declassification to Pence on Friday.

"While Ms. [Jennifer] Williams already testified generally to the phone call in question, declassification of this supplemental testimony will allow the Congress to see further corroborative evidence as it considers articles of impeachment, and provide the public further understanding of the events in question," a House Intelligence committee official told CNN.

About the call: Williams, an aide to Pence, told lawmakers she listened to a phone call between Pence and Zelensky, which took place on Sept. 18 after the hold on US security assistance to Ukraine was lifted, according to a transcript of her closed-door deposition.

Williams was asked if on the call Pence gave Zelensky any advice on how to approach Trump when they met at the forthcoming United Nations General Assembly meeting. Williams said Pence told Zelensky, "President Trump would be eager to hear about President Zelensky's progress in his reform agenda."