Rep. Adam Schiff, the chairman of the House Intelligence Committee, explained why Americans should care about President Trump's actions and dealings with Ukraine.

"This is not about Ukraine. This is about our democracy, our national security," he said.

Schiff went on to say the American people have the right to expect the President will act in their security interest and not with his own personal or political interests.

“This report chronicles a scheme by the President of the united States to coerce an ally, Ukraine, that is at war with an adversary, Russia, into doing the President’s political dirty work," he said.

The House Intelligence Committee report says Rep. Devin Nunes, the top Republican on the panel, was linked to the effort.

The record, according to committee member Rep. Eric Swalwell, were subpoenaed from third-parties.

“Mr. Solomon was not working alone,” the report says, of Solomon’s articles throughout 2019 that spread Trump-backed conspiracies about Ukraine. “As further described below, there was a coordinated effort by associates of President Trump to push these false narratives publicly, as evidenced by public statements, phone records, and contractual agreements.”

About the phone records: They show a web of communications between Solomon, Trump attorney Rudy Giuliani, Ukrainian-American businessman Lev Parnas, Nunes, and the White House’s budget office. Many of these calls occurred in April, according to the Democratic report, the same time Solomon pumped out columns in The Hill filled with discredited conspiracy theories about former US Ambassador Marie Yovanovitch and former Vice President Joe Biden, whose son was on the board of a prominent Ukrainian energy company.

The Democratic report identifies at least four phone calls or attempted calls between Parnas and Nunes, including one call on April 12 that lasted longer than eight minutes. Within that hour of that call, Parnas also spoke with Giuliani, who later connected with Trump’s attorney Jay Sekulow and a “White House phone number,” according to the phone records.

Why this matters: The call logs show the extent the Democratic investigators went to get hands on any evidence it could get, even as the administration blocked access to records. The records were not discussed publicly before the release of the report.

In addition, Parnas’ lawyer has said his client, who pleaded not guilty, was willing to turn over some documents to the committee and has turned over some materials already. 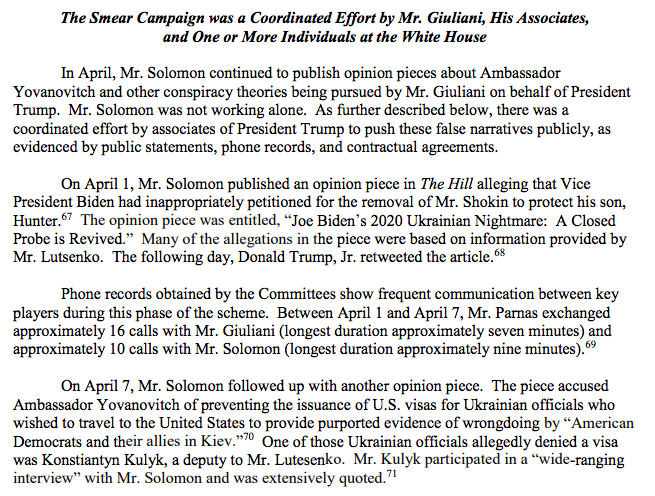 President Trump’s pressure campaign against the Ukrainians persists, as he exerts control over the country's leader through US military and financial advantages, the report says"

"Although President [Volodymyr] Zelensky did not publicly announce the investigations that President Trump wanted, he remains under pressure from President Trump, particularly because he requires diplomatic, financial, and military backing from the United States, the most powerful supporter of Ukraine. That pressure continues to this day." 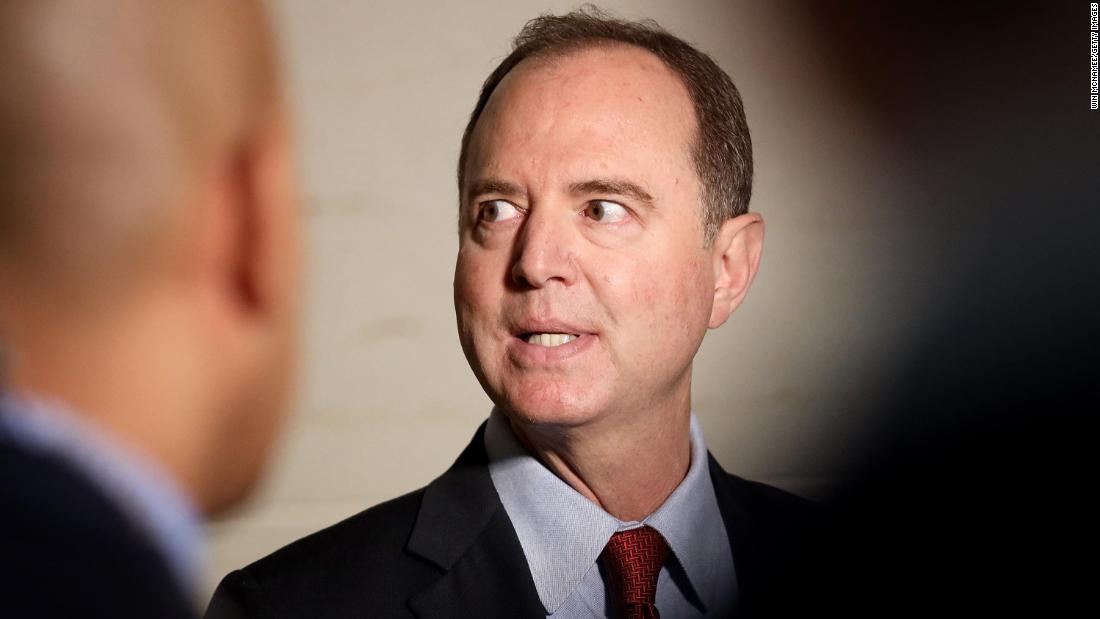 Moments ago, his committee released its report on Ukraine and the impeachment inquiry into President Trump.

House investigators were unable to reach answers to a number of questions that remained about the handling of the Ukraine scandal in the White House because of the administration’s reluctance to participate in the impeachment inquiry.

For instance, the intelligence committee was unable to determine if the resignation of former NSC chief John Bolton – on September 10, amid the first reports of a whistleblower complaint – was related to the Ukraine matter because Bolton and his top deputy, Charles Kupperman, refused to testify for lawmakers, the report says.

The report also relies on the accounting of The New York Times to explain why President Trump first learned of the existence of the whistleblower complaint, which the paper said came in a briefing with the White House counsel and an NSC lawyer in late August.

It also remains unclear why Trump lifted the hold on the military aid to Ukraine.

“Just like there was no official explanation for why the hold on Ukraine security assistance was implemented, numerous witnesses testified that they were not provided with a reason for why the hold was lifted on September 11,” the report says.

A senior budget official, Mark Sandy, did testify that he had been told the aid was on hold because Trump was concerned that other countries were not contributing more to Ukraine, although Sandy told lawmakers that the situation was entirely unique, and that he wasn’t aware that any countries had committed to provide more aid prior to the hold being lifted.

On the evening of September 11, before the hold was lifted, Trump met with Vice President Mike Pence, acting chief of staff Mick Mulvaney and Sen. Rob Portman to discuss the hold. Around 8pm that night, Mulvaney’s office informed Kupperman that the hold had been lifted, the report says, citing witness testimony.

The House Intelligence Committee's report lays out the historical precedent for including an Article of Impeachment.

“Following President Trump’s categorical order, not a single document has been produced by the White House, the Office of the Vice President, the Office of Management and Budget, the Department of State, the Department of Defense, or the Department of Energy in response to 71 specific, individualized requests or demands for records in their possession, custody, or control. The subpoenas to federal departments and agencies remain in full force and effect. These agencies and offices also blocked many current and former officials from producing records directly to the Committees," the report says.

The committee also lays out precise examples from the public hearings in which officials cited documents that State Department was refusing to turn over. In the report, Democrats accuse the White House of withholding even more relevant documents they might have produced as part of their own internal review.

“The review reportedly turned up hundreds of documents that reveal extensive efforts to generate an after-the-fact justification for the decision and a debate over whether the delay was legal," the report says.

The impeachment inquiry report says Gordon Sondland, the US Ambassador to the European Union, "was not clear on whether he had one conversation with the President in which the subject of a quid pro quo came up, or two."

Sondland was also not cleat "on precisely which date the conversation took place during the period of September 6 through 9."

Here's more from the report:

In one version of the conversation which Ambassador Sondland suggested may have taken place on September 9, he claimed that the President answered an open question about what he wanted from Ukraine with an immediate denial—“no quid pro quo.” In another, he admitted that the President told him that President Zelensky should go to a microphone and announce the investigations, and that he should want to do so—effectively confirming a quid pro quo.”

The Democratic report concludes from the committee's investigation that President Trump compromised and endangered national security by pushing Ukraine to investigate his political rivals and withholding $391 million in US security aid from Kiev.

The report says that by soliciting Ukraine to interfere in the 2020 election by investigating his rival, Trump “placed his personal political interests above the national interests of the United States, sought to undermine the integrity of the U.S. presidential election process, and endangered U.S. national security.”

The report also says that Trump’s continued solicitation of foreign interference from China and Russia to investigate the Bidens “presents a clear and present danger that the President will continue to use the power of his office for his personal political gain.”