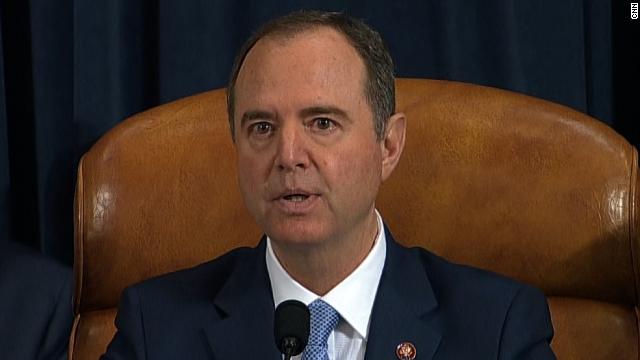 House Intelligence Chairman Adam Schiff on Sunday did not rule out the House could impeach President Donald Trump on matters beyond Ukraine during an interview with CNN’s Jake Tapper on “State of the Union.”

Democrats have been debating whether to bring articles of impeachment on allegations of obstruction of justice laid out in the Mueller report as well as potential violations of the emoluments clause of the Constitution which prevents federal officeholders from receiving payments or anything of value from a foreign state.

“Within our committee what we’re focused on is obviously the constellation of issues around Ukraine, as well as the blanket obstruction of Congress vis-à-vis the Ukraine investigation," the California Democrat said when asked by Tapper if it was up to him would the potential articles of impeachment focus only on Ukraine. “Now there’s been more obstruction of Congress that goes beyond Ukraine. There’s also the obstruction of justice that Mueller wrote about so extensively. And there are other violations of the Constitution that we will need to consider.”

He added: “I’m not at this point, Jake, prepared to say what I will recommend.”

Trump has denied obstructing justice or violating the emoluments clause. The Mueller report detailed numerous cases in which Trump asked his aides to take actions that would have obstructed the Russia investigation but stated they were unsuccessful because the aides refused the orders.

House Intelligence Chairman Adam Schiff on Sunday told CNN’s Jake Tapper on “State of the Union” the impeachment inquiry spearheaded by his panel indicates evidence of “serious misconduct” by President Donald Trump, but said he was not ready to say if he would vote for articles of impeachment.

“I certainly think that the evidence that’s been produced overwhelmingly shows serious misconduct by the President. But I do want to hear more from my constituents, and I want to hear more from my colleagues,” Schiff, a California Democrat, told Tapper. “This is not a decision I will be making alone. But at the end of the day, this is a decision about whether the founding fathers had in mind this kind of misconduct when they gave Congress this remedy.” 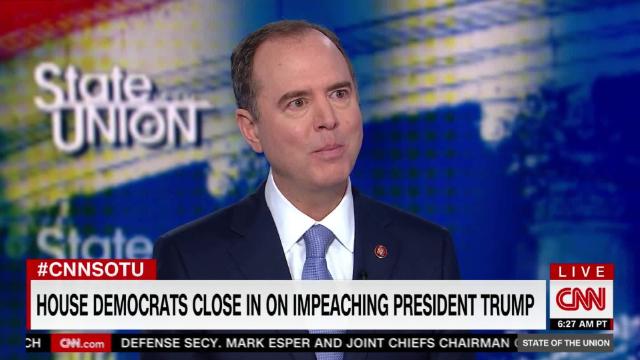 Schiff said the committee will take the time that is necessary to complete its report that will be sent to the Judiciary Committee for consideration of the articles of impeachment.

“We're at work on compiling that report right now," he said. "But, again we have continued to learn more information every day. And I think that is going to continue. So, we may have to file addendums to that report. We may have other depositions and hearings to do.”

“Because the evidence is already overwhelming and uncontested, we want to provide that to the Judiciary Committee to make sure that we protect the country in the election that's yet to come,” he added.

Schiff told Tapper on Sunday that even after its report is handed over the House Intelligence Committee’s work “isn’t going to end.”

While many national polls show the nation evenly divided over the issue of impeachment and no congressional Republicans have said they will support impeachment, Schiff said he is not deterred. 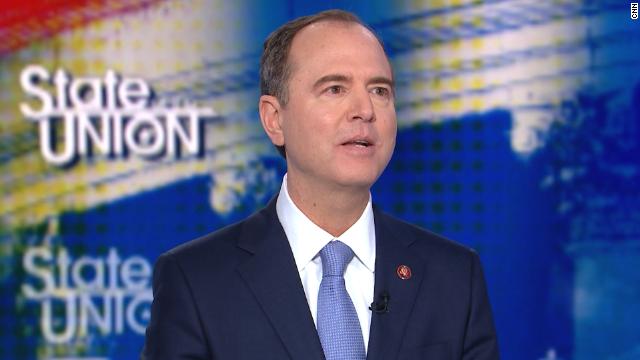 House Intelligence Chairman Adam Schiff told CNN's Jake Tapper on "State of the Union" on Sunday that he does not plan to testify if there is a Senate impeachment trial of President Donald Trump, saying that he would have nothing "pertinent" to offer.

"There is nothing to testify about. I think if the President or his allies in the Senate persist it means they are not serious about what they are doing," Schiff said. "What would I offer in terms of testimony that I heard Dr. (Fiona) Hill in open hearing say such and such? That is not pertinent. The only reason for them to go through with this is to mollify the President and that is not a good reason to try to call a member of Congress as a witness.”

His remarks on Sunday come as the House moves into the next phase of impeachment proceedings into Trump and Ukraine. Trump said on Friday if the House votes to impeach him that he supports a Senate trial. The President and his allies have called for Schiff to testify in the impeachment investigation.

"If they go down this road, it shows a fundamental lack of seriousness. A willingness to try to turn this into a circus like the President would like and I hope they don't go there,” Schiff told Tapper.

The Democratic representative pushed back on the idea that his testimony could be equated to President Bill Clinton's attorney questioning then-independent counsel Ken Starr during the Clinton impeachment proceedings, saying the two were not the same.

"I am not a special counsel. I do not work for a separate branch of government. I am not in the Justice Department," Schiff said. He went on to explain that anything he could offer was already heard in public testimony.

A handful of leadership aides and senior committee officials plan a busy week of deliberations behind the scenes to prepare for a momentous December that will likely lead to President Trump being impeached by year’s end.

Here's what you can expect:

A source familiar with the White House legal team spelled out where they stand on the impeachment inquiry as the House moves towards preparing articles of impeachment.

The House Intelligence Committee wrapped its testimonies in the impeachment inquiry into President Trump this week.

Here's a breakdown of who spoke on what days and what each person had to say:

Wednesday, Nov. 20: US Ambassador to the European Union Gordon Sondland, Laura Cooper, a deputy assistant secretary of defense, and David Hale, the under secretary of State for political affairs

Thursday, Nov. 21: Fiona Hill, the former White House Russia expert, and David Holmes, the counselor for political affairs at the US Embassy in Ukraine

The House Intelligence Committee's last public impeachment inquiry — or at least the last one that has been scheduled — just wrapped up this week. House Democrats are now actively preparing for the next steps.

In some of her most direct comments to date, Pelosi said Thursday they wouldn’t delay their impeachment push to fight for those witnesses through court battles.