Burr added that he doesn’t think much will be learned from the upcoming public hearings this week in front of the House Intelligence Committee since most of transcripts of the testimonies have already been made public.

The North Carolina Republican made those comments during a conversation at Wake Forest University on Monday, with Democratic Sen. Mark Warner, the vice chair of the Senate Intelligence Committee.

Burr, a Wake Forest alum, said he’s been through impeachment before and “nobody wins.”

“No party wins. The American people don’t win," he said.

Burr would not comment on the outcome of impeachment proceedings due to the “likelihood” that he will be a juror in an impeachment trial, but he described the trial process to a crowd in an auditorium at Wake Forest.

He added that he doesn't think there is "anyone better than Bill Taylor with a bird's-eye view" of the Ukraine controversy.

Taylor is scheduled to testify tomorrow in the first public hearing in the impeachment inquiry.

Republicans leaving a mock session spoke to reporters about what they expect tomorrow when public hearings begin in the impeachment inquiry.

Rep. Scott Perry said today's meeting was “to make sure we all kind of know what’s at play here." He said part of the discussion was focused on witnesses.

"Once again, for instance, we’ve requested witnesses. We haven’t been informed what witnesses we're going to be able to have, so how do you have these proceedings without being able to mount a defense? So that’s a part of the discussion of course — a big part of that discussion," Perry said.

House Minority Whip Steve Scalise said “we just want to make sure the facts get out” when leaving the meeting. Scalise, a close ally of President Trump, said the President knows “he did nothing wrong.”

Many of the members in the meeting are on the House Intelligence Committee, but other Republican members and leadership were also in attendance.

More details on tomorrow's hearing: Diplomats George Kent and Bill Taylor will testify tomorrow in the first public hearing in the impeachment inquiry. The hearing, which will start at about 10 a.m. ET, will be held in the largest room in the House of Representatives. Chairman Adam Schiff and ranking member Devin Nunes (or their designated committee employees) will get up to 45 minutes each. They are the only two authorized to ask questions during this round. Following this extended questioning, there will be 5-minute rounds of questioning alternating between Republican and Democratic members.

House GOP Whip Steve Scalise would not answer directly when asked if he thinks top diplomat Bill Taylor is a credible witness.

He went on to attack House Intelligence Committee Chairman Adam Schiff. When asked again about Taylor, Scalise said there was nothing wrong with President Trump's call with Ukraine President Volodymyr Zelensky.

“The bottom line is the only two people who are at the heart of this are President Trump and President Zelensky — so what other people think about a conversation is really secondary to the fact the two men ... in the conversation said it was a good call," Scalise said.

What's this all about: Taylor is scheduled to testify tomorrow in the first public hearing in the impeachment inquiry.

House Intelligence Committee Chairman Adam Schiff plans to “lay out the scope” of the impeachment investigation with his opening statement tomorrow, Democratic aides told reporters on a conference call ahead of hearing.

“He hopes to lay out the stakes for the American people, and why this matters,” said one Democratic aide, who added that Schiff tends to write his own opening statements.

The aides also explained why they paired Bill Taylor, the top US diplomat in Ukraine, and George Kent, the deputy assistant secretary of State, at the first hearing, saying both “were witness to the full storyline of the President’s misconduct.”

“The two of them saw the full scope or certainly the full timeline of the President’s misconduct this year,” one aide said.

The aides said former US Ambassador to Ukraine Marie Yovanovitch was testifying at Friday’s hearing as the “first victim of the President’s scheme.”

One aide said they were telling “a very simple story” in the public hearings that President Trump abused his office and his presidential powers.

One thing to note: The aides would not say when future hearings would be announced or when the final transcripts would be released, beyond saying they were likely “in the coming days.” Asked about discrepancies with the testimony of US Ambassador to the European Union Gordon Sondland’s testimony, one Democratic aide said Sondland was still an “open question” for future hearings.

The aides said additional logistical information for the first public hearing was likely to be released either later tonight or tomorrow morning.

Lawmakers are on Capitol Hill gearing up for tomorrow's first public hearing in the impeachment inquiry into President Trump. 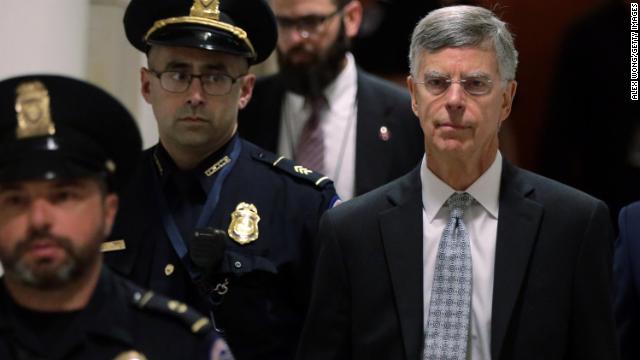 Two Republican lawmakers, who were involved in closed-door depositions, were split today on whether diplomat Bill Taylor is credible.

New York Rep. Lee Zeldin said he’s not because he was relying his testimony on “second- and third-hand info.” Taylor is scheduled to testify in a public hearing tomorrow.

When pressed about Tim Morrison, the top Russia and Europe adviser on the National Security Council, backing up Taylor’s testimony of a quid pro quo, Zeldin said that he since was relying on what US Ambassador to the European Union Gordon Sondland, another key witness, told him, the committees need to ask Sondland about what President Trump said — not Taylor or Morrison.

Zeldin wouldn’t say if the transcripts are accurate, saying they should be less redacted to be more accurate.

But Texas Rep. Mike Conaway, breaking with Trump, said the transcripts are accurate. He also said that Taylor is credible. But he said Taylor’s testimony is “hearsay” and would not be admissible in a court of law.

The court hearing set this afternoon related to a bid by acting White House chief of staff Mick Mulvaney to fight his subpoena to testify in the impeachment inquiry has been canceled, following his notice that he no longer plans to sue the House.

Earlier today, Mulvaney informed the court that he no longer plans to sue in federal court over his House subpoena in the impeachment probe.

Instead, his attorneys told a federal judge this morning that he's planning to obey the White House and Justice Department's direction for him not to testify.

Mulvaney had attempted to ask the court for help as a way to hold off being held in contempt, according to his legal arguments over the past four days.

Ahead of his public appearance before the impeachment probe into President Trump, Bill Taylor, the top US diplomat in Ukraine, penned an op-ed in a Ukrainian news magazine this week emphasizing the United States' "committed partnership and support" to the country.

The op-ed appeared in "Novoye Vremya" Sunday, according to a post from the embassy — just days before Taylor's expected appearance on Capitol Hill Wednesday. Taylor, according to a transcript from his private testimony to the House committees, was a fierce and persistent critic of withholding security aid to Ukraine, particularly because of Russia's illegal occupation of Ukrainian territory.

In his opinion piece, Taylor, who serves as charges d'affaires in Kiev, reaffirmed that the US "is firmly committed to Ukraine's success — your success is our success."

"We will not allow Russia to dismantle the international order that was painstakingly built after World War II.  The concepts of sovereignty, territorial integrity, and peaceful resolution of disputes benefit all nations. And Russia's war against Ukraine shreds the international norms that kept peace and enabled prosperity for decades," he wrote.
"The United States continues to provide weapons, training, and equipment to Ukraine's armed forces.  And we continue to impose sanctions on Russia for its illegal actions in Ukraine.  As Secretary Pompeo has said, the United States will maintain sanctions against Russia until the Russian government returns control of Crimea to Ukraine and leaves Donbas," Taylor continued.