Days after Republican Sen. Rand Paul called the for the Ukraine whistleblower’s identity to be made public, Senate Democrats attempted to pass an unanimous resolution to recognize the role of Congress and the Executive Branch to protect whistleblowers today.

Paul objected saying he wanted the Senate to pass his own bill that would apply whistleblower protections to Edward Snowden and allow President Trump to face his accuser.

Senate Minority Leader Chuck Schumer said GOP calls to name the whistleblower are “wrong” and “dangerous” and outing them would send a “chilling message to future patriots.” He urged the Senate to pass this resolution to reaffirm a longstanding tradition to protect whistleblowers. These are laws that have existed “since the founding of our republic,” Schumer added.

After Sen. Mazie Hirono, a Democrat of Hawaii, asked for unanimous consent, Paul objected. He then introduced his own bill, The Whistleblower Protection Act of 2019, which he said would provide retroactive protections for whistleblowers that could then be applied to defend Snowden, for example, and would ensure the president can have a right to address his accuser.

Paul said he isn’t objecting because he doesn’t support whistleblowers, but the system should be refined.

Hirono added in response that Paul is undermining whistleblower protections, which makes even just the name of his bill, The Whistleblower Protection Act, “appalling” and “laughable.”

In a sign that Democrats don't want a prolonged battle for witnesses in their impeachment probe, the House of Representatives says it is retracting the subpoena for former deputy national security adviser Charles Kupperman.

"The subpoena at issue in this matter has been withdrawn and there is no current intention to reissue it," the House wrote in court documents about Kupperman's testimony this afternoon.

The House instead suggested Kupperman should abide by what is decided in a separate case that is further along, its lawsuit against Don McGahn to force the former White House counsel to testify.

The House told Kupperman's attorney yesterday it still would be interested in speaking with him in the impeachment inquiry, and that he should sit for a deposition if another federal judge knocks down the White House's blocking tactic in McGahn's case. McGahn was subpoenaed in April to discuss the President's attempts to obstruct the Russia investigation.

McGahn's case is "much closer to resolution by the court than Dr. Kupperman's flawed suit," the House wrote to Kupperman's attorneys yesterday. "Unless your lawsuit was admittedly only for purposes of delay, and without a subpoena in force, the Committees expect that your client will voluntarily dismiss the complaint ... and be guided by the decision in McGahn."

CLARIFICATION: This post has been updated to clarify that the House of Representatives is retracting its subpoena of Kupperman but still may want to question him.

Top US diplomat in Ukraine Bill Taylor said in newly released congressional testimony that he believes the idea of the US pressing Ukraine to investigate Burisma and 2016 came from Rudy Giuliani, who was representing the interests of President Donald Trump.

Taylor confirmed New Jersey Democrat Tom Malinowski’s description of two Trump administration camps diverging on the Ukraine issue — those who wanted to go along with the President’s call for Ukraine to investigate and those who would not compromise their principles.

“You (all) wanted a good relationship between the two countries. And then at a certain point, you all learned that the President was in a different place, correct?” Malinowski asked.

Taylor also agreed with the assessment that the officials were divided into two camps.

“It is (a fair assessment), Congressman. And it was motivated, but as you said, toward a strong relationship. It was just different — they thought they had to take a different route through Giuliani to get there,” Taylor said.

Asked if Ambassador to the European Union Gordon Sondland was responsible for what White House national security adviser John Bolton referred to as the “drug deal” — essentially withholding Ukraine aid in exchange for the requested investigations — Taylor pointed to Giuliani as a proxy for Trump.

“I don’t think so,” Taylor said, referring to the question of whether Sondland was responsible.

“I think the origin of the idea to get President Zelensky to say out loud he’s going to investigate Burisma and the 2016 election, I think the originator, the person who came up with that was Mr. Giuliani,” he continued.

“And he was representing whose interests in —" Malinowski asked. 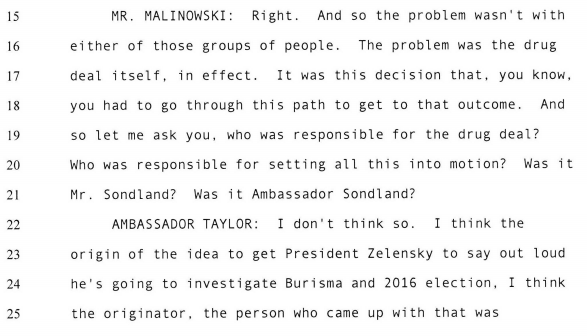 David Hale, a high-ranking State Department official, has wrapped up more than six hours of closed door testimony before the impeachment committees.

Three other officials were scheduled to testify but are not expected to show up.

Bill Taylor, the top diplomat to Ukraine, said President Trump's attorney Rudy Giuliani was pressing Ukraine “to intervene in US domestic policy or politics” by launching investigations into Trump’s political rivals, according to the transcript.

This testimony corroborates a major allegation from the whistleblower complaint, that Giuliani and Trump were trying to solicit help from the Ukrainians to boost his re-election chances in 2020. Giuliani wanted Ukraine to investigate former Vice President Joe Biden and Democratic National Committee servers.

Taylor said he saw the requests as so dangerous that he believed Ukrainian President Volodymyr Zelensky should ignore them — even if it meant losing a one-on-one meeting with Trump.

“If President Zelensky, in order to get that meeting (with Trump), were going to have to intervene in U.S. domestic policy or politics… by announcing an investigation on that would benefit someone in the United States, then it’s not — it wasn't clear to me that that would be worth it,” Taylor said.

In his testimony, Taylor said it would be unacceptable for a foreign country to meddle in the US election. Other witnesses have also condemned any effort to solicit electoral help from Ukraine.

Bill Taylor, the top diplomat to Ukraine, told the House committees that he felt that the Trump administration’s aid package to Ukraine was an improvement over that of the Obama administration.

“It was a substantial improvement, in that this administration provided Javelin antitank weapons. These are defensive weapons, and they deter, and I believe successfully deter, Russians from trying to grab more territory, to push forward any further tank attack, number one. So there was a military capability,” Taylor said.

He continued: “There was also a very strong political message that said that the Americans are willing to provide more than blankets. I mean, that was the previous. And these weapons are serious weapons. They will kill Russian tanks. So these were serious weapons. It was a demonstration that we support Ukraine.”

While serving outside of the government, Taylor had urged the Obama administration to provide lethal defensive weapons to Ukraine, but he said, “the objection was that it might provoke the Russians.”

Secretary of State Mike Pompeo has repeatedly touted the fact that the Trump administration provided weapons to Ukraine, noting to the New York Post that the “previous administration chose to provide blankets.”

Taylor explained to the House committees that “the prior administration had been willing to give aid, but ‘blankets’ was just kind of the more derogatory version of it, but it was nonlethal weapons.”

“So there was communications equipment, there were vehicles, there were maybe some rations, there were blankets, there were night-vision goggles. So it was a significant package, but it stopped short of weapons,” he said. 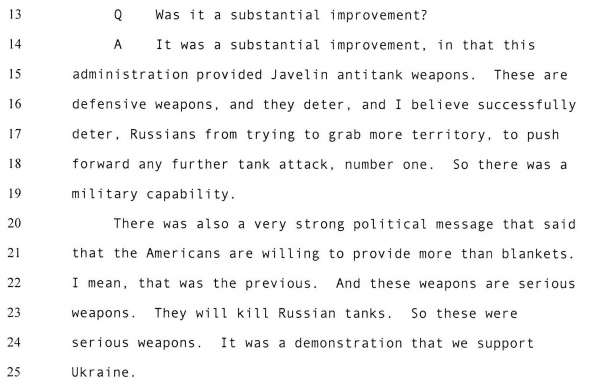 Top diplomat to Ukraine Bill Taylor sent a text message to former special envoy for Ukraine Kurt Volker and Ambassador to the European Union Gordon Sondland on September 9, describing his "nightmare scenario," as it related to frozen US security aid.

"The message to the Ukrainians (and Russians) we send with the decision on security assistance is key. With the hold, we have already shaken their faith in us. Thus my nightmare scenario," Taylor wrote on September 9. Russia has made repeated illegal incursions into Ukraine.

"As I said on the phone, I think it's crazy to withhold security assistance for help with a political campaign," he added.

During his testimony to lawmakers, Taylor described exactly what he meant by his texts.

"'The nightmare' is the scenario where President Zelensky goes out in public, makes an announcement that he's going to investigate Burisma and the election in 2016, interference in 2016 election, maybe among other things,” Taylor told the House committees. “The nightmare was he would mention those two, take all the heat from that, get himself in big trouble in this country and probably in his country as well, and the security assistance would not be released. That was the nightmare.”

Taylor said he was worried about such a scenario when he met with Secretary of State Mike Pompeo on May 28 and said he told Pompeo that if the US policy on Ukraine changed, he would leave. 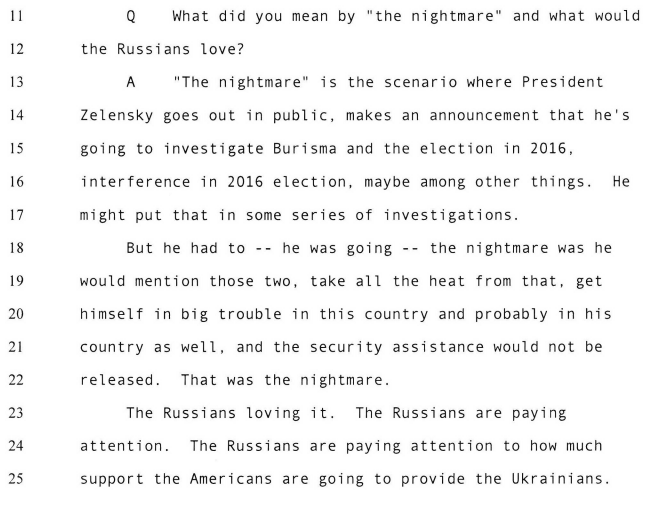 Career diplomat Bill Taylor told lawmakers that one reason why he was worried about taking the post in Kiev was because he was afraid that the Trump administration might abruptly change US policy toward Ukraine to make it much more friendly to Russia.

“I could not be effective if our strong support for Ukraine policy were to change and if we were if for some reason, I couldn't imagine this would happen, but I was worried that there could be some dramatic change where we would agree with the Russians, that well maybe Crimea is Russian after all, you know, or something like that,” Taylor testified.

Taylor said if that were to happen, “I would have to resign,” according to the transcript.

In the past, Trump has praised how Russian President Vladimir Putin handled the invasion of Crimea, and has parroted Kremlin talking points about the annexed Ukrainian territory. Trump made those controversial comments during the 2016 campaign, saying “the people of Crimea, from what I've heard, would rather be with Russia than where they were.”

The Russian military annexed Crimea in 2014, wresting it from Ukrainian control. It has been part of Ukraine since the 1950s.