Kurt Volker, the former special envoy to Ukraine, acknowledged that he knew Hunter Biden was affiliated with Burisma when Rudy Giuliani was pressing for the Ukrainians to mention “Burisma” in their public statement.

He continued: "There is Bidens; there is Burisma as a company, which has a long history; and there is 2016 elections. And part of what I was doing was making sure and why I wanted to make sure I was in this conversation that we are not getting the Ukrainians into a position about talking about anything other than their own citizens, their own company, or whether their own citizens had done anything in 2015." 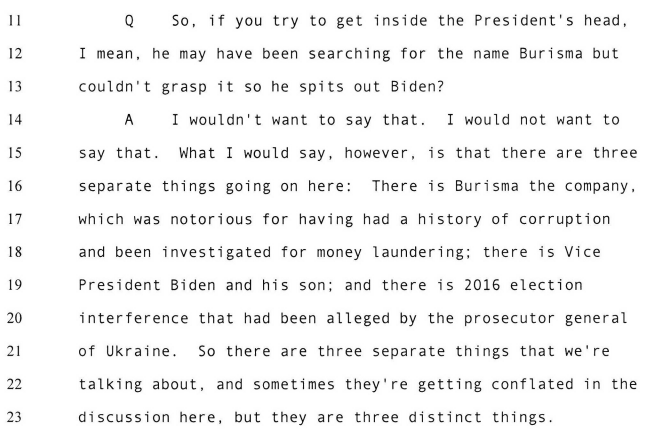 Rep. Mark Meadows tried to bait Gordon Sondland, the US ambassador to the European Union, into saying other countries have quid pro quos with Ukraine in exchange for corruption investigations, prompting Sondland to compare his questioning to the comedy "My Cousin Vinny."

Sondland said the European Union, for which he is the ambassador, is concerned with cleaning up corruption in Ukraine. He then links that concern with the amount the EU sends in aid to Ukraine.

"My Cousin Vinny" was released in 1992. The hit film tells the story of a well-intentioned lawyer, played by Joe Pesci, who makes up for his legal "ignorance and inexperience with an aggressive, perceptive questioning style," according to IMDB.

Here's how the discussion between Sondland and Meadows went:

Sondland: "Well, in my discussions with the EU, they would like to do more. They would like to see some things cleaned up before they contribute more has been my impression. I think it is one of their conditions."

Gordon Sondland, the US ambassador to the European Union, testified that Rudy Giuliani “kept repeating Burisma and 2016 election” on their calls, but he never mentioned the Bidens to him.

Sondland said he thought he participated in one or two conference calls with Volker and Giuliani and had one or two short calls directly with Giuliani. The calls were “likely” in August.

“All I can recall is the gist of every call was what was going to go in the press statement,” Sondland said. “It was solely relating to negotiating the press statement, where, you know, Volker had taken the lead on it, and then I poked my nose into it to see if I could broker some kind of a compromise so we could get moving on the White House visit.”

“I think Volker was trying to get to the bottom of what was it that the President wanted to see from the Ukrainians in order to get the White House visit scheduled,” Sondland added. “And I think Giuliani kept saying it needs to be some kind of a public utterance.”

Sondland repeatedly said he does not recall when he put together connection between Burisma and Bidens.

Gordon Sondland, the US ambassador to the European Union, said he realized on Sept. 1 that President Trump and Rudy Giuliani wanted a quid pro quo with Ukraine — and later, when it became even clearer, was "alarmed" about what the President wanted.

Sondland highlighted how he was hearing a different message from Giuliani about what Trump wanted. "I am assuming Rudy Giuliani heard it from the President, but I don't know that," he said.

"President Trump changes his mind on what he wants on a daily basis. I have no idea what he wanted on the day I called him," he added.

On Monday, Sondland's attorney sent the committee a three-page addition to his testimony, in which he said he had remembered a Sept. 1 conversation that occurred on the sidelines of a meeting between Vice President Mike Pence and Ukrainian President Volodymyr Zelensky. During that conversation, he told a top aide to the Ukrainian president that the security aid and investigations were linked.

According to the transcript, a committee interviewer asked Sondland if he realized the connection on Sept. 1 between aid to Ukraine and an announcement about the investigations Giuliani and Trump wanted.

"I think that was the beginning of when that allegation began to be made," he said, referring to a text message from another ambassador, Bill Taylor, sent him that read, "Are we now saying that security assistance and White House meeting are conditioned on investigations?"

Days later, Taylor sent another text message that made the link more clear between the withholding of aid and the President's wish for an investigation into his political rivals: "I think it's crazy to withhold security assistance for help with a political campaign," Taylor wrote.

In his testimony, Sondland called that text message "alarming."

That prompted Sondland to call the President, and pass Trump's words to him back to Taylor: "No quid pro quo."

Giuliani, however, had told Sondland Trump wanted an announcement about Ukraine investigating the company linked to the Bidens.

"Should I have done something earlier?" Sondland said about his Sept. 9 call to Trump. "Maybe. I didn't." 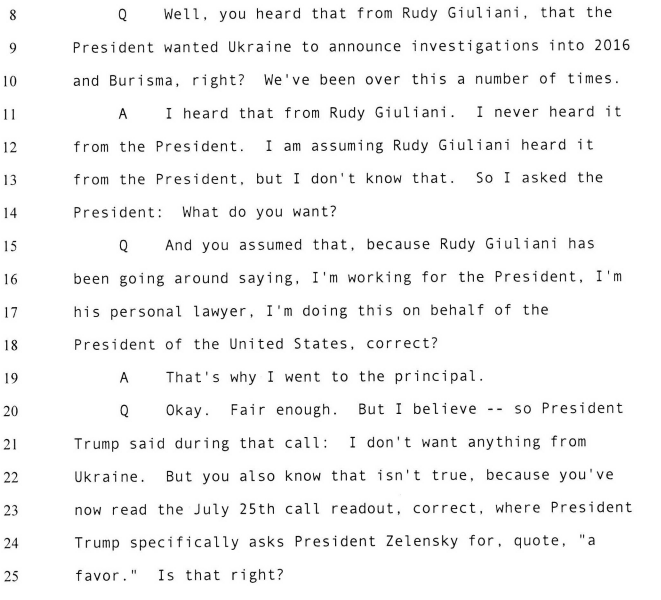 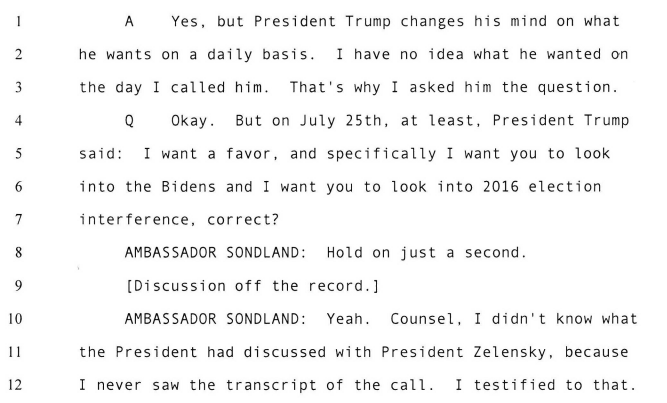 Kurt Volker at numerous points throughout his testimony acknowledged he was out of the loop on matters related the administration’s moves on Ukraine, despite his role as the US envoy for Ukraine negotiations.

Volker told House committees that he “never got a clear explanation as to what happened” with the hold in US security aid.

He said that he was not provided with “much of a readout” of Vice President Mike Pence’s meeting the Ukrainian President Volodymyr Zelensky in Warsaw on Sept. 1 — a fact he called “very, very sketchy.”

However, when asked whether he sought more information post readout, Volker said he didn’t.

“I figured that that's about as much as I needed to know,” he said.

Volker claimed that he did not know whether Rudy Giuliani had a role in facilitating the call between President Trump and Zelensky, telling lawmakers, “I believe he may have been helpful, but I don't know that.”

Read more from the transcript:

White House press secretary Stephanie Grisham said in a statement today that the testimonies of US Ambassador to the European Union Gordon Sondland and former special envoy to Ukraine Kurt Volker “show there is even less evidence for this illegitimate impeachment sham than previously thought.”

“Both transcripts released today show there is even less evidence for this illegitimate impeachment sham than previously thought. Ambassador Sondland squarely states that he 'did not know, (and still does not know) when, why or by whom the aid was suspended.' He also said he 'presumed' there was a link to the aid—but cannot identify any solid source for that assumption. By contrast, Volker’s testimony confirms there could not have been a quid pro quo because the Ukrainians did not know about the military aid hold at the time. No amount of salacious media-biased headlines, which are clearly designed to influence the narrative, change the fact that the President has done nothing wrong.”

Former US special envoy for Ukraine Kurt Volker said there was no validity to the allegations that President Trump pressed Ukraine to investigate — claims of corruption against former Vice President Joe Biden's son, Hunter Biden, and allegations that Ukraine meddled in the 2016 election to help Hillary Clinton.

Asked if he believed the allegations, Volker said, "No, I do not."

Read the exchange below: 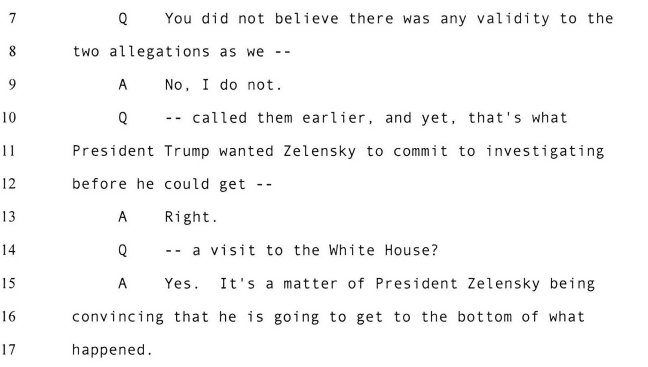 Ambassador to the European Union Gordon Sondland said he worked with Rudy Giuliani and others to prompt Ukraine to make a public announcement about its investigation — and that any announcement would need to be on TV so President Trump would see it, according to the transcript released Tuesday.

What this means: The emphasis on getting Ukraine to make a public announcement that it was investigating a company linked to Trump political opponent Joe Biden — and not just a conduct an investigation — highlights just how politicized the President's intentions had become with Ukraine.

"I think this was the press statement had now morphed into some kind of an interview that President Zelensky would give to a TV station," Sondland told the committees.

When asked what network the statement should be made on, he answered, "I don't know, but something President Trump would obviously see."

He then mentioned Fox News and its host Tucker Carlson — prompting laughter in the committee room, according to the transcript.

US Ambassador to the European Union Gordon Sondland told lawmakers that he called Energy Secretary Rick Perry on Oct. 16, the day before his deposition, to refresh his memory of the July 10 White House meeting with National Security Council officials, including Fiona Hill.

“I have spoken with Secretary Perry on several occasions relating to non-Ukraine business, and I did ask Secretary Perry to refresh my memory about a couple of meetings. Yes,” he said, according to the transcript.

About the meeting: CNN previously reported that Hill, a former White House Russia adviser, testified about a July 10 meeting on Ukraine where Sondland discussed investigations, something that was interpreted as a reference to the President's call for investigations into the Bidens, according to a source familiar.

Former national security adviser John Bolton and Hill both were concerned about the comments, and Bolton urged Hill to report the incident to National Security Council lawyer John Eisenberg, according to the source familiar with her testimony.