According to excerpts of his testimony, former special representative Kurt Volker advised the Ukrainians to drop a proposed public statement after learning that the Justice Department had not requested investigations into Burisma or the 2016 election — despite what Rudy Giuliani was promoting.

“It died. I mean, no one—once we started seeing a tempo of engagement with Ukraine, we had first the sense that Rudy was not going to be convinced that it meant anything, and, therefore, convey a positive message to the President if it didn’t say Burisma and 2016. I agreed with the Ukrainians they shouldn’t do it, and in fact told them just drop it, wait till you have your own prosecutor general in place. Let’s work on substantive issues like this, security assistance and all. Let’s just do that. So we dropped it,” Volker said.

Some background: President Trump has repeatedly claimed that former vice president Joe Biden had called for the firing of a Ukrainian prosecutor who was "investigating his son." There is no evidence Hunter Biden was ever under investigation. The investigation was into the business dealings of the owner of a Ukrainian natural gas company, Burisma Holdings, where Hunter Biden sat on the board of directors.

US Ambassador to the European Union, in a text message to Volker, had proposed that the Ukrainians put out a statement “about Ukraine’s commitment to fighting corruption and investigating things that happened in the past,” in the words of Volker.

“(That) was where we had this question that we discussed earlier about whether it would specifically mention Burisma and 2016 or not,” Volker said.

Volker testified that the statement went through various iterations, and that Giuliani wanted it to specifically mention Burisma and 2016.

Volker said Zelensky aide Yermak Andrey Yermak asked him “whether any request had ever been made by the US to investigate election interference in 2016. Volker discovered that the DOJ had not requested investigations that were being promoted by Giuliani, so he said he advised the Ukrainians not to include it in the statement. 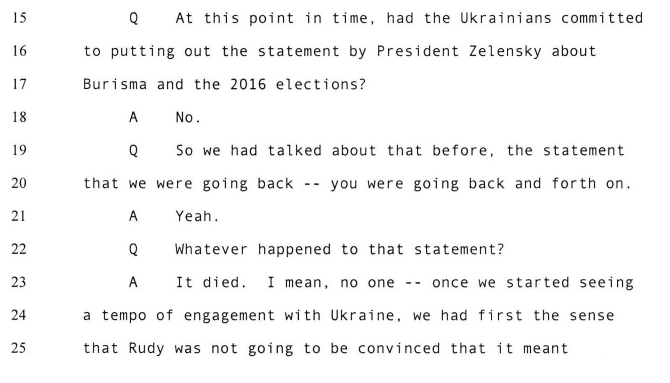 In an excerpt of his testimony, Gordon Sondland, the US Ambassador to the EU, did not recall the details of a July 10 White House meeting with Ukrainian officials.

“I may have chimed in on a point or two, but I remember it being a very friendly meeting,” said Sondland.

When asked if he brought up the prospect of investigations that Ukraine needed to conduct, Sondland responded, “Not to the best of my knowledge.”

CNN reported that Bolton said the operation carried out by Sondland and acting Chief of Staff Mick Mulvaney was like a "drug deal,” according to a source familiar with Hill’s testimony. 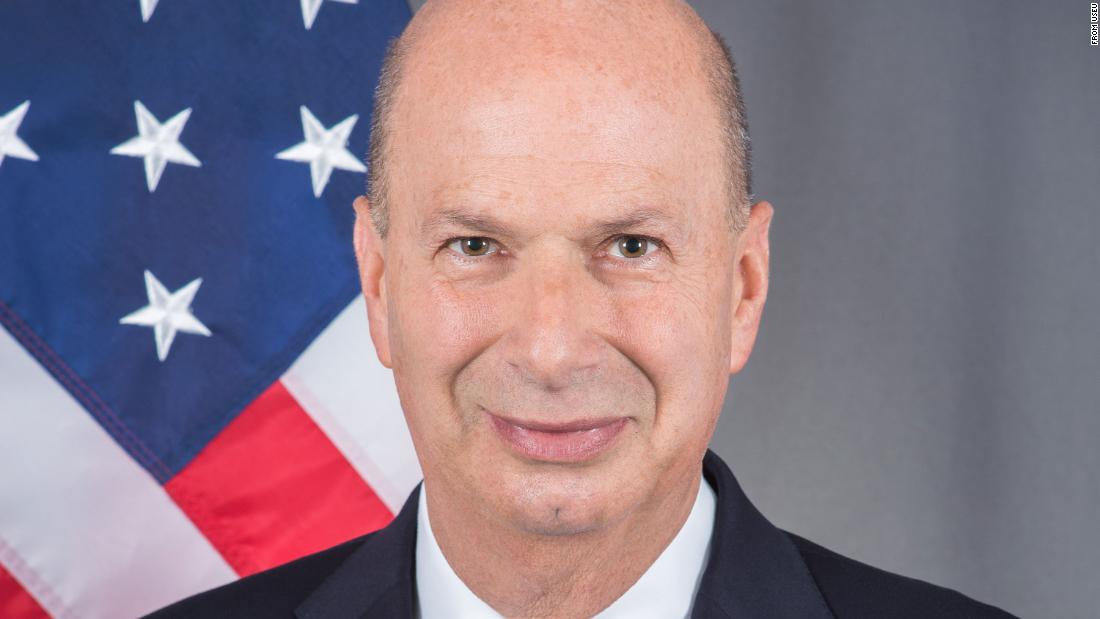 The transcript of the Congressional interview with US Ambassador to the European Union Gordon Sondland has been released.

We're going through it now, and we'll post details here.

Excerpts from the Sondland interview, as well as from an interview with former special envoy for Ukraine Kurt Volker, were released earlier today.

Former special representative for Ukraine Kurt Volker told the House committees that Ukrainian officials asked to be connected with Rudy Giuliani as a conduit to President Donald Trump, according to an excerpt of his testimony.

Asked why Giuliani would “have any role in dealing with the Ukrainians,” Volker replied:

“Because the Ukrainians asked to be connected to him in order to try to get across their message of being different from the past.”

“So the Ukrainians believed that by speaking to Rudy Giuliani they could communicate to President Trump?” he was asked.

“That information flow would reach the President,” Volker answered.

Because Rudy Giuliani would convey that information to the President presumably, correct?” Volker was asked. He responded, “Yes.”

Specifically, Volker testified that Zelensky aide Andriy Yermak asked to be connected with Giuliani, and Volker set up an introductory phone call with them on July 19.

Former US Special Envoy to Ukraine Kurt Volker rejected the conspiracy theories about Ukraine and Joe Biden that have been promoted by Rudy Giuliani, according to excerpts of his testimony to lawmakers.

Volker testified that he personally told Giuliani that the source of many of those theories was “not credible.”

Some background: Giuliani has spent much of this year spreading theories about former Vice President Joe Biden and the Democrats peddled by former Ukrainian Prosecutor General Yuriy Lutsenko.

The conspiracy theory alleges that Biden held up $1 billion in aid for Ukraine to pressure their government to fire a prosecutor who was investigating Burisma, an energy company where Biden’s son had a high-paid board seat.

There is no evidence of wrongdoing by Joe Biden or his son Hunter Biden.

Volker also testified that Biden didn’t do anything wrong by pushing for the ouster of that top prosecutor, Viktor Shokin, who was dismissed in 2016. The US and other European allies sought Shokin’s removal because he was not doing enough to crack down on corruption in Ukraine.

“(Biden) was executing U.S. policy at the time and what was widely understood internationally to be the right policy,” Volker testified.

In an excerpt of his testimony, Kurt Volker — the former US special representative for Ukraine negotiations — described a May 23 meeting with President Trump when the President expressed deep skepticism of Ukraine and told officials to “talk to Rudy” about Ukrainian officials’ alleged wrongdoing.

In the meeting, Volker and other administration officials recommended Trump schedule an Oval Office meeting with the newly elected President Zelensky. But Trump was skeptical.

“They are all corrupt, they are all terrible people,” Volker recalled Trump saying. “I don’t want to spend any time with that.”

Volker also recalled Trump saying “they tried to take me down,” insisting that Volker and the other officials’ recommendation he cultivate Zelensky as a partner were misguided.

“He was skeptical. And he also said, that’s not what I hear. I hear, you know, he’s got some terrible people around him. And he referenced that he hears from Mr. Giuliani as part of that, Volker said, according to the excerpt.

Volker said Trump didn’t explicitly instruct the official to speak with Giuliani. But he did raise his personal attorney as having knowledge of the situation.

“I think he said, not as an instruction but just as a comment, talk to Rudy, you know. He knows all of these things, and they’ve got some bad people around him,” Volker said.

EUAmbassador Gordon Sondland, a key witness who spoke with the President about his intentions in Ukraine, told the House Committees he believed Rudy Giuliani's push for Ukraine to investigate the Bidens was potentially illegal, according to excerpts of transcripts released Tuesday.

When asked if it was illegal, Sondland responded:

When asked a second time, Sondland again said he wasn't a lawyer, before adding, "I don’t know the law exactly. It doesn’t sound good."

Remember: Giuliani has not been charged with a crime but CNN has reported he is part of an ongoing investigation by federal prosecutors in Manhattan.

Here's the exchange, according to excerpts of Sondland's testimony obtained by CNN:

Q: When you said in your statement, on page 8 of your statement, you did not understand until much later that Mr. Giuliani’s agenda might have also included an effort to prompt the Ukrainians to investigate Vice President Biden or his son or to involve Ukrainians directly or indirectly in the President’s 2020 reelection campaign, why did you—why do you think that either of those activities are problematic?  Sondland: Because I believe I testified that it would be improper to do that.  Q: And illegal, right? Sondland: I’m not a lawyer, but I assume so.  Q: Sir, one last question, which is: Do you believe that, with regard to Burisma, that the effort by Giuliani to investigate Burisma, now that we know that it was actually intended to go after Mr. Biden’s son Hunter, was ever a proper inquiry?  Sondland: I mean, I think I testified to that at the beginning, that it would not be proper.  Q: And illegal, correct?  Sondland: Again, I’m not a lawyer. I don’t know the law exactly. It doesn’t sound good.

Former special representative for Ukraine Kurt Volker testified to the House Committees that while foreign aid routinely gets held up, he found the hold in assistance to Ukraine “unusual,” according to an excerpt of the transcript of his testimony.

“I agree with you in saying that assistance gets held up for a variety of reasons at various times. That is true,” Volker said. “In this case, here you had an instance where everyone that I spoke with in the policy side of the administration—you know, Pentagon, military, civilian, State Department, National Security Council—they all thought this is really important to provide this assistance.”

He continued: “And so, in that circumstance, for there to be a hold placed struck me as unusual. I didn’t know the reason. No reason was ever given as to why that was ... It came from OMB, so I immediately thought about budgetary issues, that, for whatever reason, there’s a hold placed. There was one report about a hold placed on all assistance because of a concern about end-of-year spending not being done efficiently.”

Volker said he became aware of the hold on July 18 – before the Trump-Zelensky call – but he did not find out the reason for the hold.

“Nobody ever gave a reason why,” Volker said.

Someone asked him: “(But) with something this serious and bipartisan and significant, there should be an explanation, right?”

“There should have been, but there wasn’t,” he replied.

Volker told the committees that he did not believe the hold would be “sustained” because it went against accepted, bipartisan policy.

“And I just didn’t believe that this hold would ever be sustained because the policy community in the administration was determined to see it go forward,” Volker said. 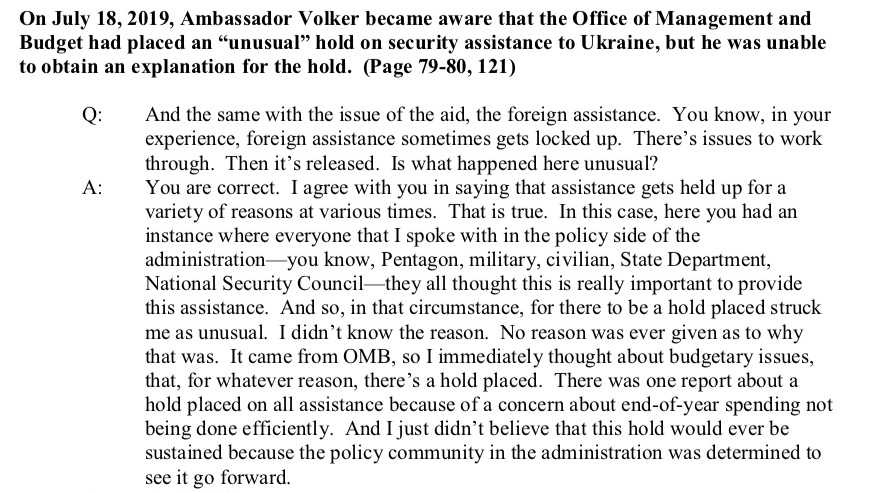 US Ambassador to the European Union Gordon Sondland said he discussed Rudy Giuliani with Secretary of State Mike Pompeo but only in “general terms,” according to an excerpt of a transcript released by the committees today.

Here's part of the exchange:

Q: Did you ever discuss Rudy Giuliani with Secretary Pompeo?
Sondland: Only in general terms.
Q: And what did you discuss?
Sondland: That he’s involved in affairs. And Pompeo rolled his eyes and said: Yes, it’s something we have to deal with.

He also said the State Department was “fully aware of the issues” related to Giuliani.

Q: Yeah, but, I mean, he was causing serious issues in the U.S. relationship with Ukraine. Did you raise those concerns with—
Sondland: Listen, the State Department was fully aware of the issues, and there was very little they could do about it if the President decided he wanted his lawyer involved.
Q: And does that include Secretary Pompeo and his counselor, Ulrich Brechbuhl?
Sondland: My speculation is yes, that they hit a brick wall when it came to getting rid of Mr. Giuliani.