Wright's funeral and latest on...

Former State Department adviser Michael McKinley testified that he raised the idea of sending a statement of support for former US ambassador to Ukraine Marie Yovanovitch three separate times with Secretary of State Mike Pompeo and never received a substantive response from him.

McKinley disclosed this during a line of questioning by Rep. Adam Schiff, the chairman of the House Intelligence Committee.

Later, McKinley was pressed by Republicans on whether it was possible that Pompeo’s lack of response could have been due to the fact that he hadn’t “fully come to grips with how they were going to respond to this inquiry.” McKinley acknowledged that was possible but also stated that “this approach … was having a negative impact” insight the State Department. 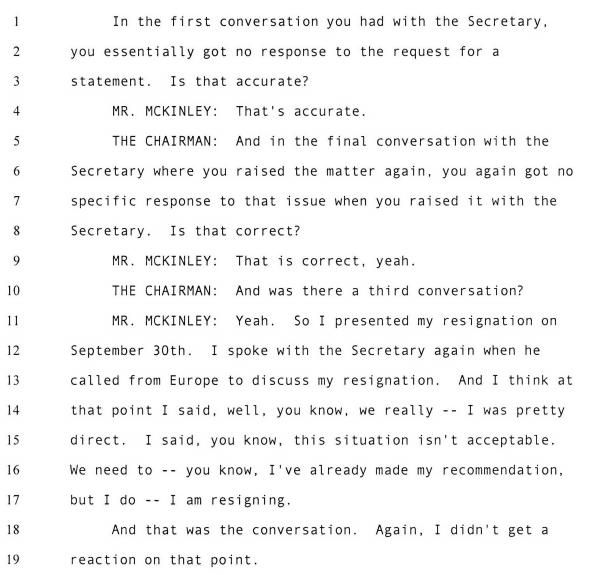 Former US Ambassador to Ukraine Marie Yovanovitch said she felt threatened after President Trump used her name on the July 25 phone call to the president of Ukraine.

According to the transcript from her deposition last month, Yovanovitch was asked about a transcript of the call, which showed President Trump saying "she's going to go through some things."

During the testimony, someone asked Yovanovitch, "What did you understand that to mean?"

"I don't know what it meant," she answered. "I was very concerned. I still am."

"Did you feel threatened?" she was asked.

Former US Ambassador to Ukraine Marie Yovanovitch testified that she didn’t believe the charges against Serhiy Leshchenko, a former Ukrainian government official convicted in a Kyiv court in 2018 of meddling in the 2016 US election.

Leschenko and Artem Sytnyk released documents in August 2016 exposing Paul Manafort’s secret dealings in Ukraine, and were later accused by Rudy Giuliani of colluding to help the Democrats.

“I mean, honestly, I didn't believe the charges. I thought that they were politically motivated against Leshchenko,” Yovanovitch told the committees.

She also said that “it felt too political” to her and that she did not have instructions from State, [Department of Justice] or Washington to intervene on “what seemed to be internal Ukrainian political fights kind of using us.”

She denied that there had been conversations with the State Department about special treatment or protections.

Grassley's defense of the law comes after President Trump tweeted that the whistleblower "must be brought forward to testify."

Grassley said he wants to make sure the law is followed.

Grassley said he hasn’t discussed the matter with Trump, adding that he'd only talk about it with the President "if he asked me to discuss it with him."

Former US Ambassador to Ukraine Marie Yovanovitch testified that she called US Ambassador to the European Union Gordon Sondland to ask for his advice earlier this year in the wake of public attacks from President Trump’s closest allies, specifically his son Donald Trump Jr., his lawyer Rudy Giuliani and Fox News host Sean Hannity.

Yovanovitch testified that Sondland told her "You know, you need to go big or go home. You need to, you know, tweet out there that you support the President, and that all these are lies and everything else."

She later explained the situation in more detail, saying that Sondland told her, “You know the President. Well, maybe you don't know him personally, but you know, you know, the sorts of things that he likes. You know, go out there battling aggressively and, you know, praise him or support him.”

Yovanovitch testified that his response “took me aback.” She testified that didn’t see how she could follow Sondland’s advice, because she is a career foreign service officer and must remain apolitical. Sondland is a Trump political appointee and is close to the President after donating handsomely to his inauguration.

“And, you know, so, you know, I mean, obviously, that was advice. It was advice that I did not see how I could implement in my role as an Ambassador, and as a Foreign Service officer," she said.

“I just didn't see that there would be any advantage to publicly taking on a fight with those who were criticizing me in the United States,” Yovanovitch said.

As onetime US ambassador to Ukraine Marie Yovanovitch came under attack from some of President Trump’s allies — including his son, Donald Trump Jr., — she pressed the State Department to issue a statement supporting her.

But such a statement never came because officials were worried Trump might “undermine” it with his own messages.

Speaking during a congressional deposition on Oct. 11, Yovanovitch said she felt a statement from Washington was necessary to maintain her credibility in Kiev.

“If you have the President's son saying, you know, we need to pull these clowns, or however he referred to me, it makes it hard to be a credible ambassador in a country,” she said.

She said she wanted a statement of support from the State Department, and spoke with acting assistant secretary Phil Reeker about it.

“What I wanted was the secretary of state to issue a statement that said that, you know, I have his full confidence or something like that, to indicate that I, in fact, am the ambassador in Ukraine, and that I speak for the President, for the Secretary of State, for our country," she testified.

She said she heard from Reeker that after discussions with senior State Department staff, there was concern that such a statement could be undercut by the President himself.

“I was told there was caution about any kind of statement, because it could be undermined,” she said.

She clarified the concern was about the President himself undermining his own agency in a “tweet or something,” though she said it wasn’t clear to her how the undermining might occur.

She said it was ultimately made clear that “non statement was going to be issued, not by the Secretary, not by anybody else.”

Former US ambassador to Ukraine Marie Yovanovitch said there was “no official policy” at the State Department to link Ukraine aid to Biden investigations. But after reading texts between Kurt Volker, Gordon Sondland and Bill Taylor — which were released by House Democrats early in the inquiry — Yovanovitch wondered “whether there was an unofficial policy.”

This all came up while Yovanovitch and lawmakers were trying to untangle the official work of the US embassy in Ukraine with Giuliani’s campaign of shadow diplomacy, seemingly blessed by President Trump.

Here's how her exchange with Rep. Lee Zeldin went down: 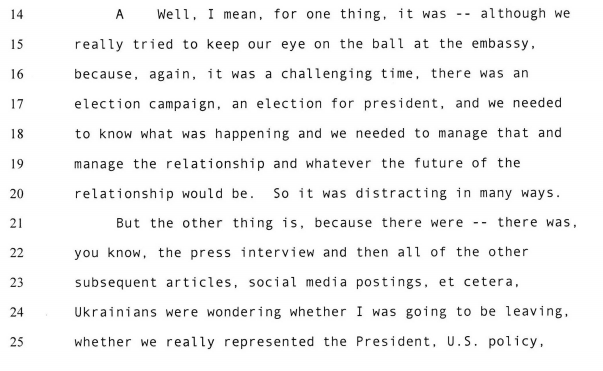 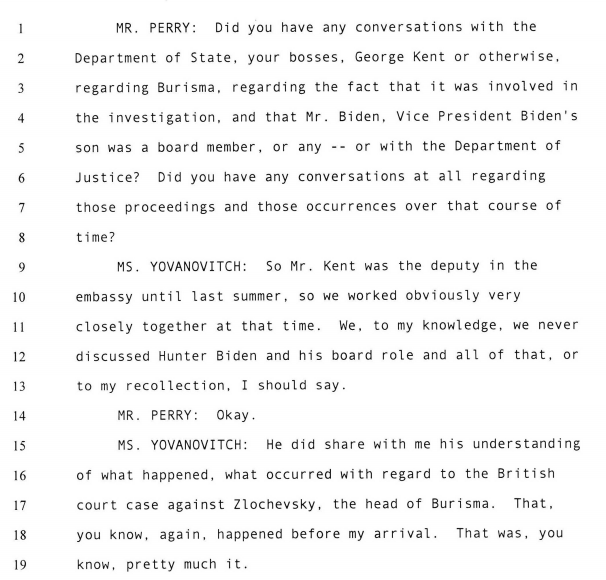