President Trump dismissed polls that show growing support for impeachment among Americans as “fake,” and “lousy.”

The President did not give any more details on what he says are the “real polls.”

Recent polls: The Fox News poll released this morning found 49% in favor of impeaching and removing the president, 45% were opposed.

The NBC News/Wall Street Journal poll also released this morning found 49% in favor of impeaching and removing the president, 46% were opposed.

Two polls released last week show Americans divided on the impeachment inquiry. A poll from the University of Texas and the Texas Tribune found that Texas voters were about evenly split over whether Trump should be removed from office before the end of his term. The Washington Post/ABC News poll shows Americans are split along party lines on whether to impeach and remove Trump.

President Trump attacked the whistleblower who set off the impeachment inquiry as an, “Obama person,” a “never Trumper,” and “a radical."

“The whistleblower gave a very inaccurate report,” Trump told reporters on the south lawn of the White House, after returning from New York City.

Trump made it clear he was relying only on media reports when it came to the identity of the whistleblower.

Earlier today: Mark Zaid, an attorney for the whistleblower at the center of the ongoing impeachment inquiry says he offered to have Republicans on the House Intelligence Community submit questions to his client directly without having to go through the committee's Democratic majority, CBS News is reporting.

According to CBS, Zaid said he contacted Representative Devin Nunes, the ranking member of the House Intelligence Committee, on Saturday to say his client is willing to answer Republicans' questions under oath and penalty of perjury if lawmakers submitted written questions to the whistleblower's legal team.

The identity of the whistleblower: Democrats and Republicans got into a shouting match behind closed doors Tuesday while interviewing a witness in the impeachment investigation, with Democrats accusing Republicans of trying to out the anonymous whistleblower, according to five sources from both parties.

House Intelligence Chairman Adam Schiff objected to a line of questioning from Republicans during the deposition of Lt. Col. Alexander Vindman, the National Security Council official in charge of Ukraine policy, charging that the GOP questions were part of an effort to out the whistleblower, sources said.

Republicans pushed back, arguing they were simply asking questions about who Vindman might have spoken with — and that it was not an effort to out the whistleblower.

Acting White House chief of staff Mick Mulvaney didn't exactly get a ringing endorsement from President Donald Trump today, who was asked if he still has confidence in Mulvaney.

Mulvaney drew criticism from Republicans and Trump's ire after his briefing room performance last month where he admitted to a quid pro quo over Ukraine.

But more recently, White House sources have said there's no indication that Mulvaney is going to be fired.

President Trump said it is up to his former National Security Adviser John Bolton and "the lawyers" if he is going to testify in the House impeachment inquiry.

Bolton has been in talks with the House committees investigating Trump about giving his testimony about US policy toward Ukraine. Other witnesses have already testified that Bolton had concerns about US security aid to Ukraine being withheld amid pressure on Ukraine to investigate Democrats.

Ahead of Bolton's potential testimony, the President -- who fired Bolton in an early September tweet -- proclaimed to "like John Bolton" and to have "always got along with him."

"I like John Bolton. I always got along with him, but that’s going to be up to him," Trump said of Bolton potentially testifying.

Bolton and Trump did not always get along and their relationship soured in the final months of Bolton's tenure, leading to his dismissal.

White House senior counselor Kellyanne Conway said this morning that she does not know if President Trump withheld US military aid to Ukraine, but stood by the White House's response that there was no quid pro quo between the President and the country.

Her comments come after the House passed an impeachment resolution outlining procedures moving forward in its impeachment inquiry into the President centered on the July 25 phone call between Trump and Ukrainian President Volodymyr Zelensky.

A whistleblower complaint alleges the President pushed Zelensky to investigate former Vice President Joe Biden and his son, Hunter. There is no evidence of wrongdoing by either Joe or Hunter Biden in Ukraine. Trump has denied any wrongdoing

Conway told CNN's Dana Bash on "State of the Union" Sunday there was "no quid pro quo in this call in terms of the President" when asked about the foreign aid.

"President Trump never said to the Ukrainian President 'do this and you'll get your aid.' It is simply not here," she said.

But when pressed on what happened after the July call between Trump and Zelensky, and if she felt confident there was no quid pro quo, Conway said she did not know.

Mark Zaid, an attorney for the whistleblower at the center of the ongoing impeachment inquiry says he offered to have Republicans on the House Intelligence Community submit questions to his client directly without having to go through the committee's Democratic majority, CBS News is reporting.

According to CBS, Zaid said he contacted Representative Devin Nunes, the ranking member of the House Intelligence Committee, on Saturday to say his client is willing to answer Republicans' questions under oath and penalty of perjury if lawmakers submitted written questions to the whistleblower's legal team.

Previously, the whistleblower had offered to answer questions under oath and in writing if submitted by the House Intelligence Committee as a whole. This new offer would be a direct channel of communication with the Republicans who are in the minority on that committee. Republican leadership has complained that the process is unfair and overly restrictive on their ability to question witnesses, CBS said.

Zaid said the offer underscores his client's desire to ensure his complaint is handled in a nonpartisan way, CBS said. 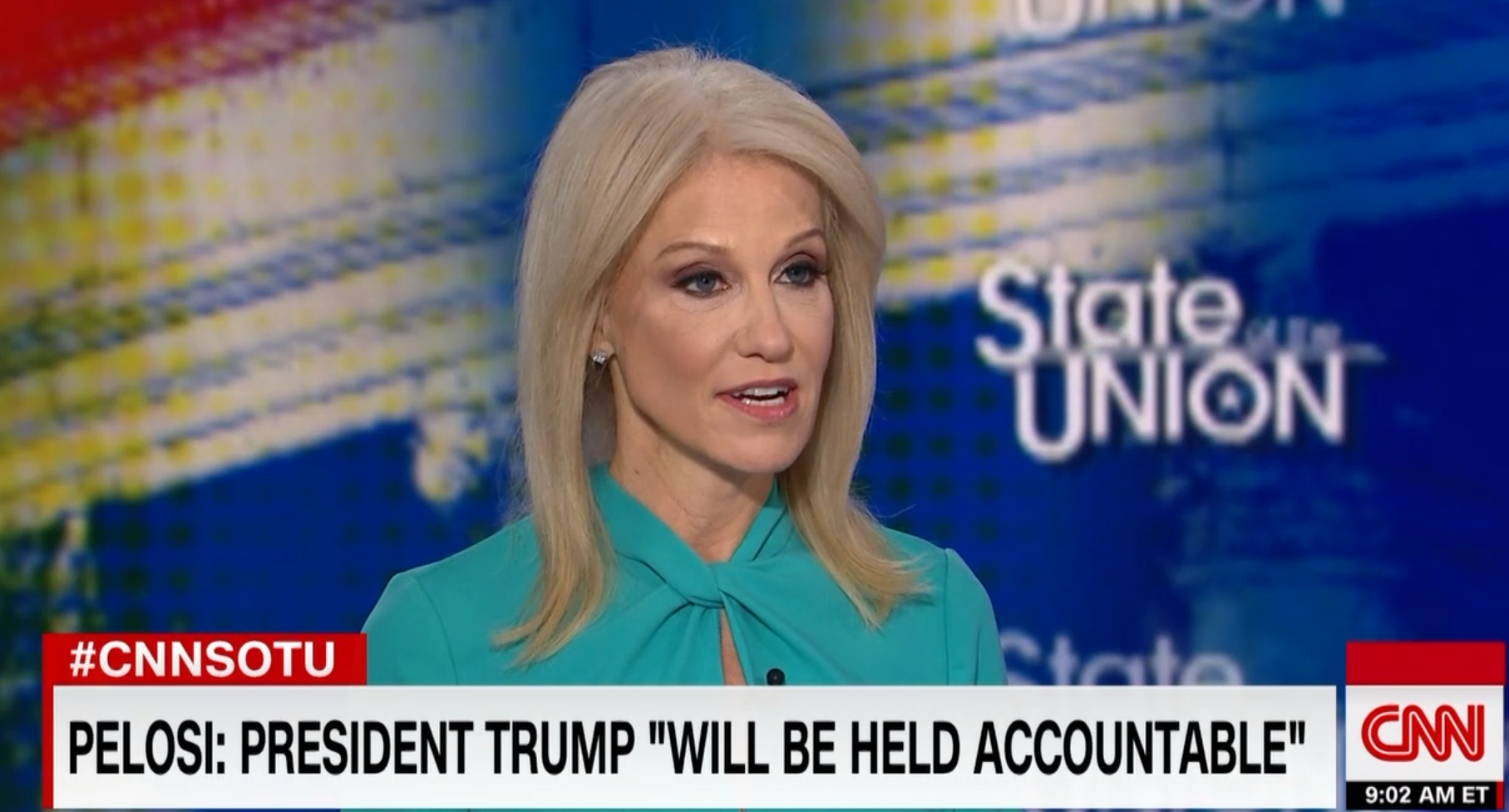 On CNN’s "State of the Union" this morning, Kellyanne Conway, counselor to the President, would not say whether it was appropriate for President Trump to ask a foreign power to look into his political rival Joe Biden and his son Hunter.

Conway tried to invoke suspicions about the Bidens and said the former vice president should face scrutiny as he runs for president. There is no evidence of wrongdoing by Joe or Hunter Biden. She also said Joe Biden is not a top political rival of Trump, bringing up an instance of Biden misspeaking on the campaign trail in Iowa.

When pressed further on the issue by host Dana Bash, Conway contended that asking a foreign leader to investigate a political rival is “not impeachable” and repeatedly denied that there was a quid pro quo related to Ukrainian military aid.

When asked about the US holding up military aid from Ukraine, Conway continually answered that Ukrainians now have aid from the US. However, when asked if there was a time when aid was held up because Trump wanted Ukraine to look into the Bidens, Conway answered “I don’t know, but I know they’ve got their aid.” Later in the exchange, Bash asked Conway point blank about a quid pro quo related to the military aid, to which Conway answered she didn’t know “whether aid was being held up or for how long.”

Conway denied that Trump’s assertion that “Never Trumpers” were “human scum” applied to Lt. Col. Alexander Vindman, although the President has called Vindman a “Never Trumper.” Conway said she would “never disparage the patriotism or the public service” of Vindman, but then called his interpretation of the July 25 phone call into question.

Bash also asked Conway about newly released memos from the Mueller investigation obtained by CNN detailing former Trump campaign chair Paul Manafort’s efforts to push a conspiracy blaming Ukraine for 2016 election hacking, despite the US intelligence community’s assessment that Russians were to blame.

Conway said she trusts US intelligence officials, but when asked by Bash if this means she thinks the Russians were responsible, Conway answered “who cares.”

As for the President’s beliefs on the matter, Conway repeated Trump’s rhetoric calling into question whether Russia, Ukraine, or a “guy in New Jersey” were responsible for “interference overall.” She later said the President “has great faith in the U.S. intelligence community” and did not go any further on whether Trump believes Russia was responsible for 2016 election interference.

The House committees leading the impeachment inquiry are hoping to hear from Robert Blair, an assistant to President Trump and senior adviser to acting chief of staff Mick Mulvaney, though that looks unlikely considering Blair's attorney said he has refused to testify in the probe.

Blair -- who was on the line during Trump's July call with Ukraine's President -- was requested to testify about White House policy toward Ukraine.

"Mr. Blair is caught between the assertions of legal duty by two coequal branches of government, a conflict which he cannot resolve," Blair's attorney Whit Ellerman told CNN on Saturday.

Blair has not yet received a subpoena, but Ellerman said Blair will still refuse to testify if he is subpoenaed.

Blair's hiring allowed Mulvaney to have a hand in national security issues without having to go through former White House national security adviser John Bolton. After Bolton was fired, one administration official said that Blair could be a favorite to replace Bolton because of his support from Mulvaney.

Blair was one of just a small group of officials on the line during Trump's controversial phone call with Ukrainian President Volodymyr Zelensky. Mulvaney was not.

During the July 25 call, Trump asked Zelensky to investigate former Vice President Joe Biden -- despite there being no evidence of wrongdoing by either Joe Biden or his son, Hunter, in Ukraine.

The phone call was part of a whistleblower's complaint that alleged Trump sought "to solicit interference" from Ukraine in the upcoming 2020 election, and that the White House took steps to cover it up. Trump has denied doing anything improper.