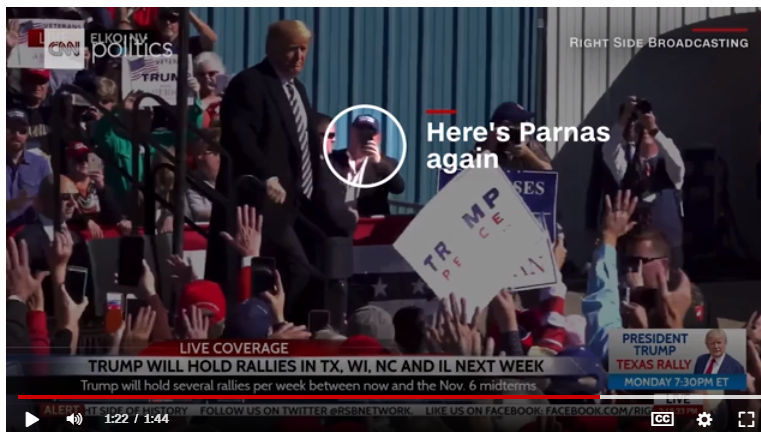 In the videos, Parnas sits in the area directly behind Trump before and during the rally.

It is unclear how Parnas, who is not a Nevada native, got into the prized seating area directly behind the President. A photo from Parnas' Instagram featured in a video by the Wall Street Journal shows he appeared to have a VIP badge for the event.

Remember: Parnas and his business partner and fellow Giuliani associate, Igor Fruman, are alleged by prosecutors to have illegally funded donations from foreign nations to Republican political campaigns in attempts to buy influence. They are also alleged to have aided Giuliani, the President's personal attorney, in efforts to dig up political dirt on former Vice President Joe Biden.

Trump has publicly distanced himself from Parnas and Fruman since their indictment.

House Speaker Nancy Pelosi tweeted this morning about the impeachment investigation into the President calling the inquiry "deadly serious."

On President Trump, Pelosi added, "This isn't about his personality or his politics."

The tweet included a clip from the Democratic congresswoman's appearance last night on The Late Show With Stephen Colbert. In the clip, Colbert asks Pelosi what the "first words" out of her mouth were after she heard the July 25 phone call between Trump and Ukrainian President Volodymyr Zelensky at the center of the impeachment investigation. "I prayed for the United States of America," she responded.

Americans are split along party lines on whether to impeach and remove President Trump, according to a Washington Post/ABC News poll released today.

Coming on the heels of the House's approval vote on Thursday formalizing the procedures of the impeachment inquiry into Trump and after weeks of testimony from current and former administration officials behind closed doors, the poll shows results nearly identical to a recent CNN poll released last week that half of Americans support removing the President—suggesting that levels of impeachment support have remained steady as the inquiry ramps up.

In Friday's poll, 49% of Americans indicated that Trump should be impeached and removed from office, while 47% indicated that he should not be as the House's impeachment inquiry into Trump's dealings with Ukraine head into its next phase.

The poll finds a wide partisan gap on impeachment and removal. Eighty-two percent of Democrats support removing the President from office, while 13% are against it. Meanwhile, 18% of Republicans back removing Trump, while 82% oppose it. Independents, though, are split—with 47% backing impeachment and 49% against it.

President Trump is tweeting this morning about the impeachment inquiry, thanking Rep. Lee Zeldin, a Republican from New York.

Rep. Zeldin tweeted earlier this month that he has "sat through EVERY interview so far of this so called 'impeachment inquiry' & the President hasn’t done anything to possibly impeach him for."

Trump is also quoting his supporters on their negative views of impeachment, including talk show host Sean Hannity and radio hosts Rush Limbaugh and Mark Levin.

Where the impeachment stands now: The House passed a resolution yesterday formalizing the procedures of the impeachment inquiry into President Trump. Two Democrats broke from their party to vote against the resolution. Reps. Collin Peterson of Minnesota and Jeff Van Drew of New Jersey both voted "nay" on the resolution, pointing to the lack of bipartisan support. No Republicans voted in favor.

One after the other, almost every Democrat in tough House races across the country voted on Thursday to establish the rules for the impeachment inquiry into President Donald Trump, despite Republican predictions it will end their political careers.

The vote showed the broad support among Democrats for an investigation that has already raised multiple accounts that the President asked a foreign country to investigate a political rival. Only two out of 234 Democrats joined the Republicans in opposition, Reps. Jeff Van Drew of New Jersey and Collin Peterson of Minnesota.

But beneath the display of party unity, many Democrats in competitive districts took pains to explain their vote, while Republicans boasted that it would be a boon to their efforts to retake the House.

Vulnerable House Democrats acknowledged the threat. They said they came to Washington to work on behalf of their constituents, not to charge the President with crimes. They said the new rules would provide what Republicans have asked for weeks — public hearings — and provide due process for the President. They said they can still work on the issues they ran on, including health care, infrastructure and veterans' affairs.

It was clear Democrats were wary of how their votes would be perceived.

Moments after the House passed a resolution establishing procedures for the next phase of the impeachment inquiry into President Donald Trump, the White House condemned the vote.

In a statement, White House press secretary Stephanie Grisham said that the resolution "fails to provide any due process whatsoever to the Administration," calling it "unconstitutional."

Trump echoed his administration's complaints in an interview with British radio station LBC that aired soon after the vote. Referring to the resolution he said, "They gave us absolutely no rights."

Facts First: The resolution does not violate due process nor is it unconstitutional. In fact, part of the resolution explicitly details the rights available to the President in the impeachment inquiry.

In a section authorizing the Judiciary Committee to conduct proceedings, the resolution notes these should include "such procedures as to allow for the participation of the President and his counsel."

According to a fact sheet released by the House Rules Committee, these procedures include the opportunity for the President or his counsel to present their case, attend hearings, request additional testimony, cross-examine witnesses and raise an objection to testimony given. There is a caveat that "if the President unlawfully refuses to cooperate with congressional requests," then the extent of the administration's participation is at the committee chairman's discretion.

House Intelligence Chairman Adam Schiff said Thursday that transcripts from the impeachment inquiry's closed-door interviews could start being publicly released as early as next week.

Schiff made the revelation when he told CNN's Chris Cuomo on "Cuomo Prime Time" that accusations from Republicans that the minority party isn't getting enough time to ask questions in the closed-door depositions are false.

"Those arguments you've heard are almost completely false, with only one exception," Schiff said. "And when you see the transcripts, and we expect to begin releasing them as early as next week, you'll see that the Republicans have every bit as much time to ask questions."

The public release of the transcripts would mark a significant step for the public's knowledge of what's been said in the impeachment inquiry's depositions thus far. All the interviews have been behind closed doors, and what is known about them has come from the release of witnesses' opening statements to the media and leaks from those inside the room.

Donald Trump has solved his problem over his weak impeachment defense, fusing it with an audacious reelection pitch that makes a virtue of the rule-breaking character that got him into trouble.

The President is heaping pressure on Republicans to buy a factually dubious but bold message: Not only did he not abuse power in Ukraine but his conduct is that of a tough guy President beset by corrupt elites and boosting the US abroad.

The narrative effectively folds Trump's apparent transgression into an extension of the effective 2016 campaign pitch that only a rule breaker can crush the power of the Washington swamp. It's a risky message from a President who's counting on his political instincts that tell him swing state voters aren't convinced by Democrats' impeachment pitch -- and one whose presidency has been dripping in allegations of corruption, self-dealing and infringing the limits of presidential power.

The defense shone through a new Trump campaign ad previewed Wednesday night and in arguments by GOP lawmakers as the Democratic House held its historic preliminary impeachment vote tailored to fire up the President's base supporters. And in an interview with The Washington Examiner, Trump felt so confident that he pitched reading the transcript of his controversial call with Ukrainian President Volodymyr Zelensky in a "fireside chat on live television."

Oddly, despite the House majority signaling it had the numbers to impeach the President, Thursday was one of his better days in the dramatic month-long impeachment spectacle.

Here are the latest developments in the impeachment inquiry into President Donald Trump.