CNN asked President Trump whether he believed the top diplomat in Ukraine Bill Taylor’s testimony. Trump would not answer the question, but referred to Taylor as a “Never Trumper”.

“He’s a Never Trumper — his lawyers the head of the Never Trumpers — they’re a dying breed but their still there.”

In a closed-door deposition Tuesday, Taylor said he had been told by Gordon Sondland, the US ambassador to the European Union, that "everything" Ukrainian President Volodymyr Zelensky wanted, including a White House meeting and military aid to the country, would be held up until he publicly declared investigations sought by Trump.

Taylor's statement undercut the White House's defense that there had been no quid pro quo offered on the call, as well as Sondland's previous testimony to Congress, but it corroborated many of the claims made by the intelligence community whistleblower whose complaint prompted the impeachment inquiry.

Asked about Republican senators who have not signed on to Sen. Lindsey Graham’s resolution critical of the House impeachment process, which calls on the House to hold a vote to initiate a formal inquiry, President Trump claimed that “some of them don’t even know about it yet.”

“Some of them weren’t even spoken to yet,” Trump told reporters on the South Lawn of the White House today.

“They got 40 very quickly. I think they’re at 47 and some of them don’t even know about it yet. It only took place yesterday afternoon. They had a great response,” the President said.

About the resolution: The resolution, co-sponsored by Senate Majority Leader Mitch McConnell, argues that the House is "denying President Trump basic fairness and due process accorded every American."

In a statement in support of the resolution, McConnell said that the inquiry "is breaking critical precedents, denying the administration important rights that were afforded other presidents, and violating basic rules of due process."

President Trump would not answer whether he would like his Justice Department to investigate the Bidens, but continued to hammer Hunter Biden’s business dealings.

"I consider what they did to be an outrage to our country," Trump said without answering the question either way.

"All he’s doing, in my opinion, that’s a payoff. You don’t pay that kind of money for any other reason and then you look at what the father did with oil — and let’s get oil and then all of a sudden let’s not get oil and now he’s a great environmentalist because Ukraine benefits by that," Trump said.

There is no evidence of any wrongdoing by either Hunter or Joe Biden.

A coalition of Inspectors General wrote a letter to Assistant Attorney General Steven Engel this week slamming a memo from the Office of Legal Counsel (OLC) that determined the whistleblower complaint was not of “urgent concern,” according to a copy of the letter obtained by CNN.

The OLC memo disputed the conclusion by the Office of the Inspector General of the Intelligence Community (ICIG) and temporarily prevented the ICIG from taking the complaint to Congress.

The now-declassified Sept. 3 opinion advised the Director of National Intelligence to keep the whistleblower complaint within the Justice Department for a possible criminal probe instead of sending it to congressional lawmakers.

“This letter from the Council of the Inspectors General on Integrity and Efficiency, on behalf of the undersigned federal Inspectors General (IG), expresses our support for the position advanced by the ICIG and our concern that the OLC opinion, if not withdrawn or modified, could seriously undermine the critical role whistleblowers play in coming forward to report waste, fraud, abuse, and misconduct across the federal government,” the letter states.

Federal prosecutors in New York have subpoenaed the brother of one of the recently indicted associates of Rudy Giuliani, according to two people familiar with the matter, as they escalate their investigation in the campaign finance case.

The subpoena to Steven Fruman is the latest indication of prosecutors' actions since the rushed arrest two weeks ago of his brother, Igor Fruman, and another defendant, Lev Parnas, at a Washington-area airport. Since then, investigators have doled out multiple subpoenas and conducted several property searches, in one case blowing the door off a safe to access the contents, sources tell CNN.

Federal prosecutors told a judge this week that they are sifting through data from more than 50 bank accounts. In addition, they've put a filter team in place as they examine communications obtained via search warrant and subpoena, sensitive to material that could be subject to attorney-client privilege because Giuliani, President Trump's personal attorney, counted Parnas as a client. A filter team is a separate set of prosecutors who are assigned to examine evidence and set aside material that is privileged.

Since the Oct. 9 arrests, federal agents visited the New York home of Steven Fruman and served him with a subpoena from Manhattan federal prosecutors, the people familiar with the matter said.

President Trump has asked the DC Circuit Court of Appeals to rehear his attempt to stop a subpoena of his longtime accounting firm, this time with the President asking the full appellate court to reconsider his case.

Trump has also asked the appeals court to keep his case on a slow timeline and pause the subpoena as they consider his arguments, potentially preventing his accounting firm from turning over documents to the House for the foreseeable future.

Trump's legal team also noted their wish that the Supreme Court consider questions about the House subpoena of his records.

Conway was also asked whether she is being considered for Trump's chief of staff, to which she said: “I highly doubt it because we have a chief of staff.”

When asked about top Ukraine diplomat Bill Taylor’s testimony and his laying out of a quid pro quo, Conway said, "That’s one person’s testimony. There’s been other testimony. I believe that Ambassador Sondland… made very clear in a text to Ambassador Taylor that was not the President’s intent."

Conway went out to say she believes "There was no quid pro quo intended" by President Trump.

"I think intent matters and when people say this is what the President intended… you don’t know that," she said.

When asked why the White House doesn’t have a messaging plan on impeachment, Conway said, "The President has told you exactly what he thinks about it."

More context: Following Taylor's testimony earlier this week, several lawmakers taking part in the impeachment inquiry said Sondland's testimony was inconsistent with what they heard from Taylor. Democratic Rep. Gerry Connolly said he thinks Sondland "may very well have to come back. He’s got some explaining to do."

While the President has opposed a war room effort, several of his top aides are increasingly recognizing the need to bolster the White House's messaging operations as Democrats march toward impeachment.

Trump has not yet signed off on Sayegh and some White House officials are already opposed to his hire.

Sayegh and the White House did not immediately respond to CNN's request for comment. The New York Times first reported that Sayegh was under consideration.

The back cover of the book “A Warning” to be published next month — written by the senior Trump administration official who wrote a 2018 New York Times op-ed — promises “You will hear a great deal from Donald Trump directly, for there is no better witness to his character than his own words.”

According to Axios, which first reported that the conversations will be recounted in the book, the anonymous official was a frequent participant in meetings with the President and had access to internal notes they plan to include in their new book.

Here's a look at the back cover of the book: 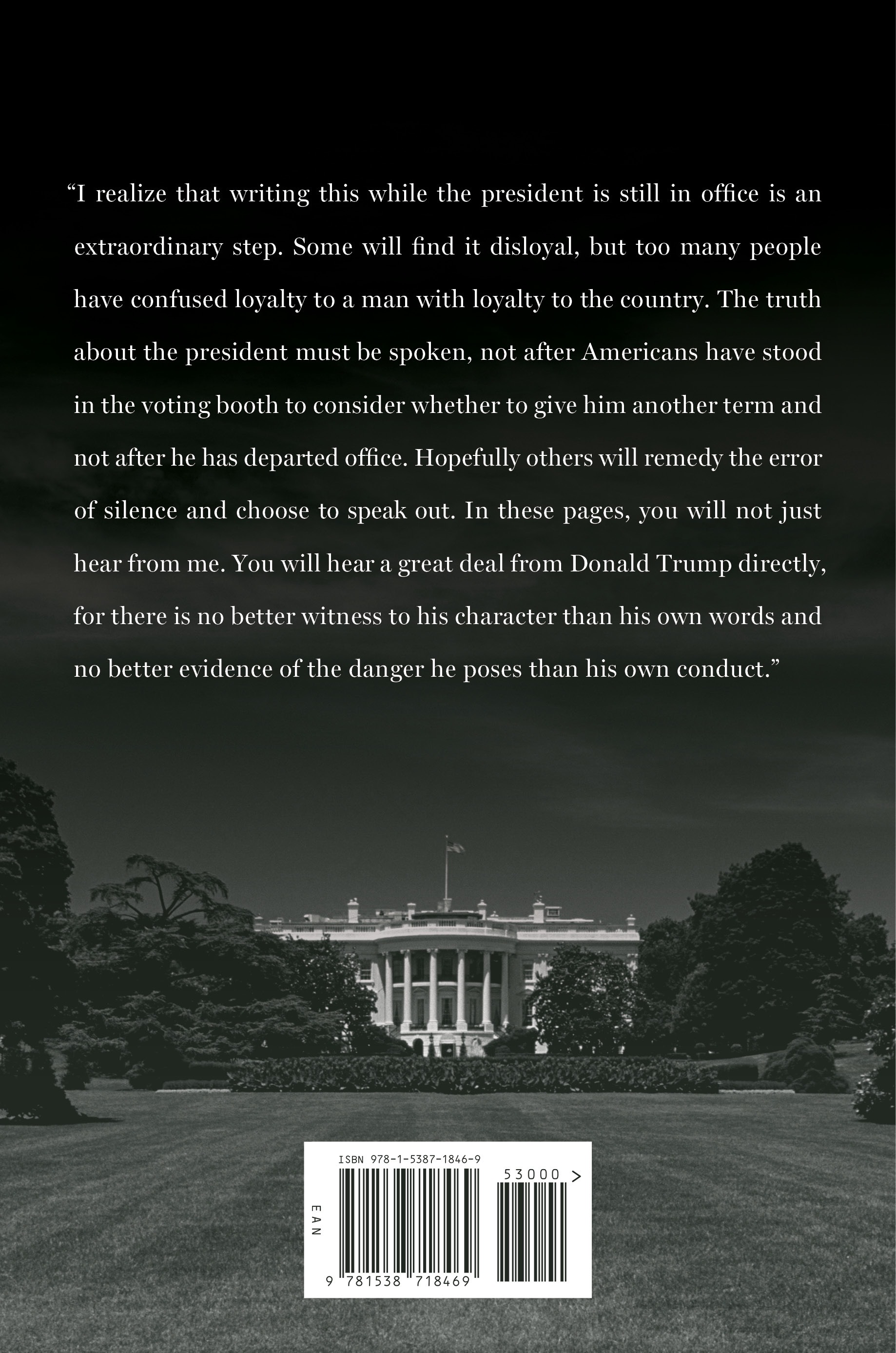