Rep. Matt Gaetz’s protest today has been on his calendar for about a week, a GOP congressman involved in the demonstration told CNN.

However, it was initially called as a traditional press conference. It wasn’t until it actually happened that this person – obviously not an organizer – realized they were going to go to the Sensitive Compartmented Information Facility, or SCIF.

A key note: President Trump, who met with some of the lawmakers involved in the protest at the White House on Tuesday, had advance knowledge of the plans to attempt entry to the SCIF, according to a person familiar with the matter.

Earlier today, before Deputy Assistant Secretary of Defense Laura Cooper was scheduled to testify behind closed doors, a group of Republicans stormed the room in protest.

The Republicans are not on the three committees leading the impeachment inquiry, and are therefore barred from today's testimony.

The House Republicans holding a sit-in inside the House room where Deputy Assistant Secretary of Defense Laura Cooper was supposed to testify have now left for the House floor, so they can participate in votes.

Minority Whip Steve Scalise, who was one of the lawmakers taking part in the protest, said they might return after the vote.

President Trump has just fired off a biting tweet about Republican support.

It is unclear who Trump is speaking about, but some Republicans have broken with Trump in recent weeks over both impeachment and his handling of Syria.

Just yesterday, some Republicans in Congress expressed concerns with Trump's conduct following Ambassador Bill Taylor's testimony — though others like Rep. Jim Jordan have argued Taylor did not establish a quid pro quo — as Republicans continue to press Democrats to change how they conduct the impeachment inquiry.

"The picture coming out of it, based on the reporting that we've seen, I would say is not a good one," said Sen. John Thune of South Dakota, who as the majority whip is a member of Senate GOP leadership. "But I would say also that until we have a process that allows for everybody to see this in full transparency, it's pretty hard to draw an hard and fast conclusions."

Also noteworthy, Trump has pinned this tweet to the top of his profile.

A group of Republican lawmakers this morning stormed into the House room where Deputy Assistant Defense Secretary Laura Cooper was scheduled to testify in the impeachment inquiry to protest the way Democrats are leading the impeachment process.

It was a chaotic scene, and some of the Republican protesters are still in the room. Here's everything we know about the storming stunt:

"That's his view of a conversation he wasn't involved in," Sekulow said of Taylor's testimony.

"If you had a parking ticket in municipal court, you'd have more due process than the President of the United States is getting," Sekulow added.

Sekulow, who also heaped praise on Sen. Lindsey Graham, discussed the South Carolina Republican's plan to introduce a resolution condemning the House impeachment inquiry, as the President's allies ratchet up their attacks on the impeachment process rather than the substance of the Democrats' inquiry.

Sekulow and his son, Jordan, also continued to push the incorrect claim that Democratic Rep. Adam Schiff and his staff helped the whistleblower write the complaint.

Rep. Tom Malinowski, a Democrat from New Jersey, called it a “pathetic stunt.”

It’s unclear when the hearing will still start again since the members won’t leave the room. 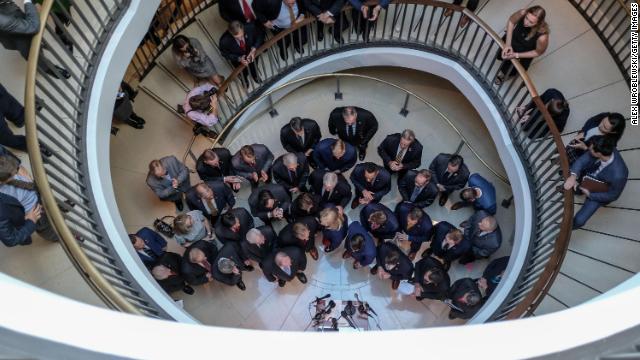 Snacks have been brought in for the protesting Republicans remaining in the room, including Cheez-It crackers, a source familiar with the situation tells CNN.

A group of Republicans stormed the House room where Deputy Assistant Secretary of Defense Laura Cooper was about to testify. They shouted at Intelligence Committee Chair Adam Schiff and criticized the process of the Democratic-led impeachment inquiry.

The protesting representatives are not on the three committees leading the impeachment inquiry, and are therefore barred from today's testimony.

After a group of Republicans stormed the House room where Deputy Assistant Secretary of Defense Laura Cooper was about to testify, Democratic Rep. Val Demings of Florida shouted back at them.

She asked if they were trying to teach their children “that it’s OK to lie, steal and cheat so long as you don’t get caught?”

The Republicans — who are not on the three committees leading the impeachment inquiry, and therefor barred from today's testimony — entered the room and yelled at Intelligence Committee Chair Adam Schiff. They also criticized the process of the Democratic-led impeachment inquiry.

"You storm in here claiming to stand up for justice, but there are people in your districts suffering who you don’t even know their names" Demings said of the Republicans, according to a source. "There’s people dying every day of gun violence in your districts and you’re silent on that."

Demings also asked a Republican member: “Don’t you have any work to do today?”

Rep. Stephen Lynch said about a half-dozen Republicans are still in the room.