The second-ranking Republican leader, Sen. John Thune told reporters moments ago that “the picture coming out” of Bill Taylor’s testimony about a quid pro quo “is not a good one."

“The picture coming out of it, based on the reporting that we’ve seen, I would say is not a good one," he said. "But I would say also that until we have a process that allows for everybody to see this in full transparency, it’s pretty hard to draw an hard and fast conclusions."

What this is about: Bill Taylor, the top US diplomat in Ukraine, testified yesterday that he had been told President Trump would withhold military aid to the country until it publicly declared investigations would be launched that could help his reelection chances.

Moments ago, Lev Parnas arrived for his arraignment at federal court. He and Igor Fruman – who have served as Rudy Giuliani's conduit to Ukraine — were indicted earlier this month on four counts, including conspiracy to violate the ban on foreign donations to federal and state elections, making false statements and falsifying records to the Federal Election Commission.

Some context: Parnas and Fruman are associates of Rudy Giuliani, President Trump's personal lawyer. The two are connected to efforts to dig up dirt in Ukraine on Democratic presidential candidate Joe Biden.

Sens. Kamala Harris, Richard Blumenthal and Sheldon Whitehouse asked Attorney General William Barr for "documents that will shed light on any attempts by the White House to interfere with the Justice Department’s work in the interest of the president’s political goals."

“The rule of law in our country depends on having a Department of Justice that is fair, impartial, and independent,” Harris said in a statement. “But under this administration, the American people can no longer trust that their attorney general is committed to pursuing justice for every single American."

As another witness heads to Capitol Hill to testify in the impeachment inquiry, President Trump tweeted, "Where's the Whistleblower?"

Some background: There is no indication that this whistleblower has disappeared.

And as we explained here, the whistleblower’s account of President Trump's phone call with Ukraine's leader has largely been proven accurate by the rough transcript released by the White House itself. All three of the whistleblower’s three primary claims were correct.

She's expected to testify in front of the House Intelligence, Oversight and Foreign Affairs committees this morning.

Cooper is currently believed to be voluntarily appearing before the three House committees leading the Democratic impeachment inquiry and the Pentagon has not yet sought to block her testimony. She will be accompanied by a personal lawyer, according to defense officials.

Bill Taylor, the top US diplomat in Ukraine, testified yesterday that he had been told President Trump would withhold military aid to the country until it publicly declared investigations would be launched that could help his reelection chances.

The deposition appears to directly refute the President's claim that there was no quid pro quo in his dealings with the former Soviet state.

But what does "quid pro quo" mean exactly? It's a Latin term meaning something for something.

The White House has denied there was any quid pro quo: Acting White House chief of staff Mick Mulvaney last week said Trump held up an aid package to Ukraine in exchange for an investigation into an unsubstantiated theory that Ukraine, not Russia, was responsible for hacking Democratic Party emails in 2016. But hours later, Mulvaney attempted to claim that he did not admit to the quid pro quo despite clearly being asked if the Trump administration withheld funding for Ukraine for an investigation into the DNC server and answering affirmatively.

Says later, he aggressively denied that he admitted last week a quid pro quo between Trump and Ukraine, saying again that he was misunderstood and that no such agreement occurred.

Trump himself has also denied any quid pro quo. Here's what he tweeted last month:

Impeachment investigators plan to interview several high-profile individuals in closed-door depositions — though when those depositions will happen remains in flux.

Bill Taylor, the top US diplomat in Ukraine, testified yesterday, and Deputy Assistant Secretary of Defense Laura Cooper is expected to appear before the committees today.Here's who else is on the agenda:

Saturday: Philip Reeker, Acting Assistant Secretary for European and Eurasian Affairs at the State Department, is scheduled to testify. He was among the career state officials who worked to shield Marie Yovanovitch, former Ukraine ambassador, from conspiracies peddled by conservative media outlets beginning in March.

Delayed depositions: Several individuals have been previously scheduled to testify, but have had their depositions delayed. They include... 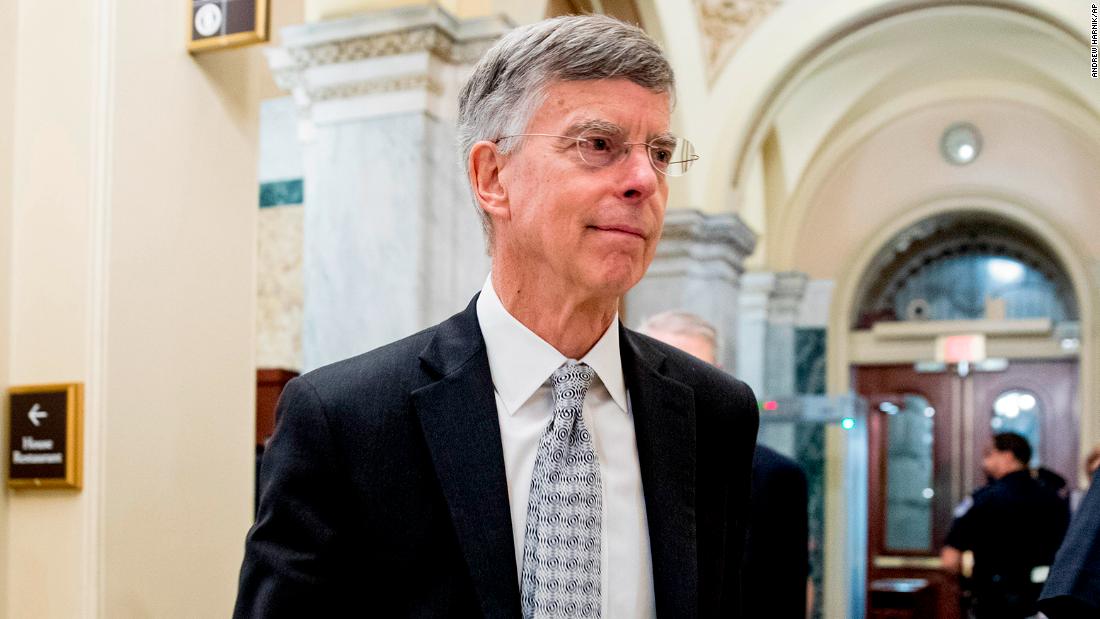 Democrats may have just unearthed their smoking gun and the quid pro quo in one fell swoop after the most consequential and dramatic turn yet in their impeachment investigation into President Trump.

Here's what happened: The top US diplomat in Ukraine notified House investigators that he was told that the release of military aid to Kiev would depend on a pledge to probe the 2016 election and 2020 Democratic presidential candidate Joe Biden, who, according to a new CNN poll conducted by SSRS, leads Trump by 10 points in a hypothetical 2020 general election matchup.

Why it matters: The deposition by Bill Taylor yesterday appears to directly refute the President's claim that there was no quid pro quo in his dealings with the former Soviet state.

Taylor's testimony bolsters a whistleblower report and a transcript of Trump's notorious July 25 call with Ukraine's President that shows he asked for a "favor" in return for badly needed aid as Ukraine fights Russia.

Cooper first joined the Department of Defense in 2001. She held a series of posts at the Pentagon before taking on her current assignment.

She has been a vocal advocate for US support for Ukraine in the face of what she called the "threat from Russia," telling an audience during a 2018 visit there that "going forward, the US intends to continue providing security assistance support to Ukraine across all domains, including maritime, by providing equipment to support its most critical operational needs."

"I want to be clear that the United States will remain committed to building the capacity of Ukraine's military, to include its naval forces," she added, citing progress Ukraine's government had made in reforms as the reason the US would continue supporting its military.