Congressional Democratic leaders offered a remarkable readout of a meeting with President Donald Trump today, saying that the President called House Speaker Nancy Pelosi a "third-rate politician" in what they described as a "meltdown."

"He was insulting, particularly to the speaker. She kept her cool completely, but he called her a third-rate politician," Senate Democratic leader Chuck Schumer told reporters, describing the interaction. "This was not a dialogue, it was sort of a diatribe. A nasty diatribe, not focused on the facts."

Pelosi added, "What we witnessed on the part of the President was a meltdown, sad to say."

The Democratic leaders were at the White House for a meeting on Syria.

The meeting came shortly after the House overwhelmingly passed on a bipartisan vote a resolution opposing the Trump administration's Syria troop withdrawal.

Pelosi said that she believes Trump was "very shaken up" by the vote.

US District Judge Paul Oetken has postponed the arraignment and initial conference for Rudy Giuliani associates Les Parnas and Igor Fruman until Oct. 23 at 11:30 a.m. ET.

The other two defendants, David Correia and Andrey Kukushkin, are expected to appear Thursday at 3:30 p.m, ET in a Manhattan federal courthouse for their arraignment and initial conference.

Some background: The four men were indicted last week on two counts of conspiracy, one count of false statements to the Federal Election Commission and one count of falsification of records.

The four allegedly conducted a scheme beginning in March 2018 to evade campaign finance laws, according to the indictment unsealed by New York federal prosecutors.

The House committees running the inquiry began speaking to McKinley at around 10 a.m. ET this morning.

The top US diplomat in Ukraine Bill Taylor is expected testify Tuesday before House committees in the impeachment inquiry, per a GOP source. A spokesman for the democrats declined to comment.

Taylor was thrust into the public eye following the release of his text exchanges with former Special Envoy for Ukraine Kurt Volker and President Trump's appointee to be the US ambassador to the European Union, Gordon Sondland.

In the exchanges, Taylor expressed his concerns about foreign policy moves being tied to political motives, writing that it was "crazy to withhold security assistance for help with a political campaign."

CNN reported last week that House Democrats had requested a deposition from Taylor.

More about Taylor: A source familiar with his career said Taylor took the job to be a good soldier and that from reading the public text messages, the former ambassador appeared to be doing what a professional in these circumstances would do: keeping a record of what was going on.

"He is very skilled and has many years of experience dealing with the bureaucracy. You can see in the language of the texts that he is memorializing phone calls — 'As I told you on the phone... ,' " the source said.

For months, investigators looking into Rudy Giuliani's business dealings in Ukraine have dug into everything from possible financial entanglements with alleged corrupt Ukrainian figures to counterintelligence concerns raised by some of those business ties, according to people briefed on the matter.

The counterintelligence part of the investigation indicates that FBI and criminal prosecutors in Manhattan are looking at a broader set of issues related to Giuliani, President Trump's personal attorney, than has been previously reported.

The counterintelligence probe hinges in part on whether a foreign influence operation was trying to take advantage of Giuliani's business ties in Ukraine and with wealthy foreigners to make inroads with the White House, according to one person briefed on the matter.

"I was just asked whether I or any of my clients knew of any dealings that these two guys had with Giuliani," McCallion said. "They were on the radar with regard to possible counterintelligence issues."

The indictment announced last week centers on ties between the Giuliani associates and foreigners, including a Russian national with whom they did business. The indictment doesn't mention Giuliani.

Giuliani has said he is unaware of any criminal investigation into his business dealings.

Former State official Michael McKinley testified that he repeatedly asked Secretary of State Mike Pompeo for a show of support for the ousted US Ambassador to Ukraine, Marie Yovanovitch, but was greeted with silence, according to two sources with knowledge of his testimony.

That decision to not offer Yovanovitch support was a key reason McKinley decided to resign his job, the sources added.

McKinley testified that while Pompeo helped restore morale at the department after then-Secretary of State Rex Tillerson gutted the department, he was disappointed that Pompeo did not stand up for a respected professional like Yovanovitch.

McKinley did not know the reasons why Pompeo was silent, according to sources with knowledge of his testimony so far. He said Pompeo listened to the concerns but didn’t explain his thinking.

McKinley also testified about lacking knowledge about what Rudy Giuliani was up to and said he didn’t have contact with Giuliani.

Three sources say that McKinley did not turn over documents to the committee but gave those documents to State, which has not turned them over to the House.

President Trump concluded a press conference at the White House this afternoon with Italian president Sergio Mattarella without addressing the impeachment inquiry.

The questions that Trump did take largely focused on the situation in Syria and criticisms of the decision to pull troops out of the country.

Trump denied giving Turkey the “green light” to go into Syria, also responding to Sen. Lindsey Graham’s criticisms about his approach to the situation.

“I didn’t give them the green light to invade,” Trump said during a joint press conference with the president of Italy at the White House.

Trump said that if anybody saw a letter he sent to Turkey after the phone conversation with Turkish President Recep Tayyip Erdoğan, everyone would see that he did not give them the green light.

Asked about Graham’s recent comments about Trump’s behavior with Turkey, Trump said: “Lindsey Graham would like to stay in the Middle East for the next thousand years.”

Trump added Graham “should focus on the judiciary (committee) with the Democrats.”

Trump is holding a joint press conference with the Italian president Sergio Mattarella.

The two said the testimony so far focused on “concern from a colleague about an ambassador that he held in high regard,” referring to former US Ambassador to Ukraine Marie Yovanovitch.

“Most of this is a concern by a colleague for an ambassador that he held in high regard,” Meadows said, with McCaul adding that McKinkley had “commended Pompeo for restoring morale” at the State Department, referring to Secretary of State Mike Pompeo.

Both Meadows and McCaul reiterated the Republican position that this is not a fair process, and that Speaker Pelosi should call a vote on the floor for an impeachment inquiry.

When asked by CNN if the two members were comfortable with the role Rudy Giuliani has played in this, McCaul answered that he needs to see “all of the evidence” before he can take a position.

“I will reserve judgement until Mr. Giuliani comes in,” McCaul said. “I think his position is there’s an attorney-client privilege with the president of the United States... I think we need all the facts and evidence before us.”

Here's what you need to know about McKinley: 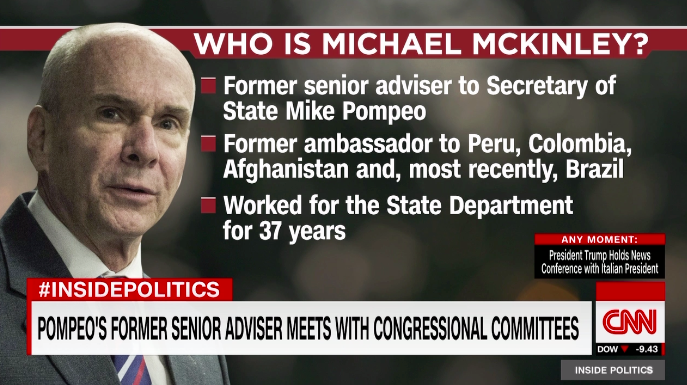