Former US Ambassador to Ukraine Marie Yovanovitch told congressional investigators today she was removed from her position because President Trump had lost confidence in her and there had been “a concerted campaign against me,” according to a copy of her opening statement obtained by The Washington Post and The New York Times.

Yovanovitch told lawmakers at a closed-door deposition that she believed she had been removed because of “unfounded and false claims by people with clearly questionable motives,” a reference to the effort led by Trump’s personal attorney Rudy Giuliani and his associates to remove her as ambassador.

Yovanovitch suggested some of those associates had financial motivations for pushing her out.

“With respect to Mayor Giuliani, I have had only minimal contacts with him—a total of three that I recall. None related to the events at issue,” she said, according to her prepared remarks. “I do not know Mr. Giuliani’s motives for attacking me. But individuals who have been named in the press as contacts of Mr. Giuliani may well have believed that their personal financial ambitions were stymied by our anti-corruption policy in Ukraine.”

A Democratic congresswoman who is attending the former US ambassador to Ukraine's testimony told reporters she finds Marie Yovanovitch "credible."

“She’s as apolitical as I’ve heard anyone...She’s acting like a kind of true ambassador, being herself,” Norton said after stepping outside the secure location where Yovanovitch is testifying today.

Yovanovitch has been testifying now for about an hour.

“She has been the object of false statements and she’s clearing that up," Norton said. "So far I think both sides are finding her very credible.”

Norton added that Yovanovitch “has not indicated that anybody tried to” prevent her from testifying today.

The DC Circuit said President Trump will have seven days to ask for another appeal on the decision endorsing the House's subpoena of his tax documents.

A 2-1 panel of appellate judges in Washington decided the case in the House's favor Friday.

Trump could now ask for a rehearing or for the full DC Circuit to review the case, or it's possible Trump could attempt to go straight to the Supreme Court in an effort to stop his tax returns from being sent to the House.

Although President Trump nominated Neomi Rao, the judge who wrote today’s dissent, as well as Greg Katsas, the DC Circuit that court still has a majority of judges appointed by a Democratic president.

If the lawyers go directly to the Supreme Court, all eyes will be on the President’s two nominees there: Brett Kavanaugh and Neal Gorsuch. 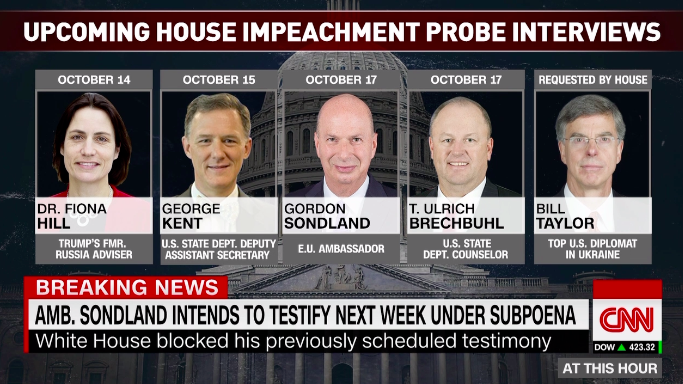 Former US Ambassador to Ukraine Marie Yovanovitch is testifying now in a closed door session with House committees running the impeachment inquiry.

Here's who we're expecting will be interviewed next in the probe:

The House committees have also requested to talk to top US diplomat in Ukraine, Bill Taylor. CNN reported earlier this month that Sondland sent text messages to Taylor about Trump's July 25 call with Ukrainian President Volodymyr Zelensky at the center of the impeachment inquiry. Taylor expressed serious misgivings about foreign policy moves being tied to political motives, calling a potential quid pro quo over military assistance to Ukraine "crazy" and suggested he would quit if that assistance was not released.

The DC Circuit Court of Appeals, in a 2-1 ruling, decided the case Friday morning, related to a subpoena of eight years of Trump’s accounting records from his longtime accountant Mazars USA.

The appeals court's opinion broadly supported the House's power to subpoena information about Trump as it investigates him and considers laws in response.

"A congressional committee, as committees have done repeatedly over the past two centuries, issued an investigative subpoena, and the target of that subpoena, questioning the committee’s legislative purpose, has asked a court to invalidate it. The fact that the subpoena in this case seeks information that concerns the President of the United States adds a twist, but not a surprising one," the court wrote. "Having considered the weighty interests at stake in this case, we conclude that the subpoena issued by the Committee to Mazars is valid and enforceable."

The decision marks the first major case where an appeals court has weighed in on the ongoing standoff between the House and Trump. Trump has lost all of his challenges so far that have been decided at the trial-court level to stop House subpoenas.

"We conclude that in issuing the challenged subpoena, the Committee was engaged in a 'legitimate legislative investigation,' rather than an impermissible law-enforcement inquiry."

The court, in its ruling, cites not only past cases settled by the Supreme Court, but also the history of past President's financial disclosures.

In a dissenting opinion, Trump-appointee Judge Neomi Rao wrote about impeachment, saying "Allowing the Committee to issue this subpoena for legislative purposes would turn Congress into a roving inquisition over a co-equal branch of government."

Though the court's decision was split, the case is widely considered to be a tough one for Trump, even with support from the Justice Department.

"We detect no inherent constitutional flaw in laws requiring Presidents to publicly disclose certain financial information. And that is enough," the Circuit Court noted.

Former U.S. Ambassador to Ukraine Marie Yovanovitch just arrived on Capitol Hill ahead of her closed door testimony in front of the House Intelligence, Foreign Affairs and Oversight committees.

Reporters shouted some inaudible questions but she didn't respond.

Ambassador to the European Union Gordon Sondland "will honor the Committees' subpoena" and testify next week in the impeachment hearing, his lawyer said this morning in a statement.

Sondland's lawyer said he had traveled from Brussels to Washington earlier this week to testify in the inquiry — but was directed "at the last minute" not to appear. The following day, on Oct. 9, the House committees running the impeachment inquiry issued a subpoena for him to testify.

Sondland has also been directed by the committees to produce relevant documents to them. However, it is unclear what he will turn over to them.

Sondland's attorney said in his statement that he "respects" their interest in reviewing all of Sondland's relevant materials but State Department regulations "prohibit him from producing documents concerning his official responsibilities."

That said, Sondland's attorney said he hopes the State Department will share his materials with the committee ahead of his Thursday testimony.

A source tells CNN this morning that one of the reasons Michael McKinley — a senior advisor to Secretary of State Mike Pompeo — resigned was out of concern over the silence in the top ranks at the State Department, who were not defending ousted US ambassador to Ukraine, Marie Yovanovitch.

The source said McKinley had been considering resigning for a few weeks.

Last night, The Washington Post reported McKinley’s departure, citing a person familiar with the situation, saying, “Like many others, [McKinley] was disappointed in the secretary’s lack of public support for diplomats who have been named in the Ukraine controversy.”

Yovanovitch is scheduled to testify today in the impeachment inquiry. The State Department has not replied to repeated inquiries across multiple days including this morning as to whether Yovanovitch will be allowed to testify.

The State Department has also not replied to repeated inquiries about Ambassador to the European Union Gordon Sondland’s subpoena.

EU Ambassador Gordon Sondland intends to testify in front of the House under subpoena next week, according to a person familiar.

As of this morning, he hasn’t received guidance from the State Department on whether he should appear under subpoena, the person said.

His planned voluntary appearance on the Hill set for earlier this week was derailed that morning when the State Department blocked him from testifying.