Vice President Mike Pence took the opportunity during a speech Saturday afternoon at a “Unite the GOP” rally in Kenner, Louisiana, to slam Democrats in Congress for launching “a partisan impeachment inquiry in a blatant attempt to overturn the will of the American people."

Pence touted President Trump’s accomplishments amidst, what he said were, “two and a half years of endless investigations” in which Democrats “found no collusion, no obstruction.”

Some background on the subpoena: This speech came one day after House Democrats requested documents from Pence as part of their impeachment investigation regarding President Trump and his phone conversation with the Ukrainian president. The subpoena for documents came in a letter yesterday from three House chairmen. The request said the documents should be handed over by Oct. 15.

One point Democrats want to look into is the circumstances surrounding Trump’s cancellation of his trip to Warsaw where he was scheduled to meet with Ukrainian President Volodymyr Zelensky. Instead Pence made the trip and met with him–now making Pence a key player in the impeachment inquiry.

President Trump called for Sen. Mitt Romney to be "impeached" in a tweet Saturday after the Republican from Utah criticized the President for urging Ukraine and China to investigate his political rival.

"I’m hearing that the Great People of Utah are considering their vote for their Pompous Senator, Mitt Romney, to be a big mistake. I agree! He is a fool who is playing right into the hands of the Do Nothing Democrats! #IMPEACHMITTROMNEY," Trump tweeted.

Trump's tweet immediately drew questions on Twitter from people curious as to whether a senator can be impeached. The short answer is: no.

Senators and members of Congress can’t be “impeached” but they can be “expelled," according to Article 1, Section 5, of the US Constitution.

The article states: “Each House [of Congress] may determine the Rules of its proceedings, punish its members for disorderly behavior, and, with the concurrence of two-thirds, expel a member."

According to Senate.gov, since 1789, the Senate has expelled only 15 members, most for supporting the Confederacy during the Civil War.

It’s not clear what Trump thinks Romney could be “impeached” or, in this case, expelled for.

Some context: The criticism of Trump from a Republican senator comes as most congressional Republicans have remained silent and declined to speak out in opposition to the President's comments on Thursday that he wants both Ukraine and China to investigate Joe Biden and his son Hunter despite there being no evidence of wrongdoing. 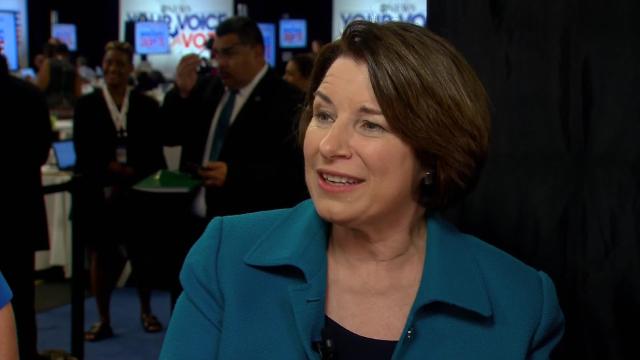 Sen. Amy Klobuchar, a Democrat from Minnesota who is also running for president, told reporters in Los Angeles Saturday that the evidence surrounding President Trump and the impeachment inquiry is "very disturbing right now."

Klobuchar called the documents in the inquiry "smoking guns."

"I think that all of us believe that the evidence is there. I just think it's nuance of how you answer this. But for me and my colleagues, we have to look at all the evidence. You may decide on five counts it's impeachable and one it isn't. You just have to look at everything. The point is as a former prosecutor, when I look at this, I consider these documents smoking guns. I've said that many times. And it just keeps getting worse. And we have not even gotten to the corroborating witness of those that used to work in the White House. Those people have to come forward. They know stuff," Klobuchar said.

Some background: A second intelligence official with concerns and direct knowledge of President Trump's dealings with Ukraine may file a whistleblower complaint, according to a report late Friday night from The New York Times.

President Donald Trump has responded to criticism from Republican Sen. Mitt Romney of Utah who called the President's appeals to Ukraine and China to investigate Joe Biden "wrong and appalling."

"Mitt Romney never knew how to win. He is a pompous 'ass' who has been fighting me from the beginning, except when he begged me for my endorsement for his Senate run (I gave it to him), and when he begged me to be Secretary of State (I didn't give it to him). He is so bad for R's!" Trump wrote on Twitter Saturday.

The criticism of Trump from a Republican senator comes as most congressional Republicans have remained silent and declined to speak out in opposition to the President's comments on Thursday that he wants both Ukraine and China to investigate Joe Biden and his son Hunter despite there being no evidence of wrongdoing.

Some more background: Trump's Saturday attack followed a Friday statement from Romney in which he wrote: "By all appearances, the President's brazen and unprecedented appeal to China and to Ukraine to investigate Joe Biden is wrong and appalling."

"When the only American citizen President Trump singles out for China's investigation is his political opponent in the midst of the Democratic nomination process, it strains credulity to suggest that it is anything other than politically motivated," Romney said.

Trump, however, did not take aim at Sen. Ben Sasse, a Republican from Nebraska, who also pushed back on the China comments and has been an occasional critic of the President.

The investigation into President Trump and the Ukraine controversy continues as a subpoena was issued to the White House for information yesterday.

If you're just tuning in, here are three other key developments:

House Speaker Nancy Pelosi didn’t rule out a full House vote on the impeachment inquiry even though Democratic leadership aides say, per House rules, it isn’t necessary to start the inquiry.

“There’s nothing anyplace that says that we should. However, the people who are most afraid of a vote on the floor are the Republicans,” Pelosi told The Washington Post. “That’s why they’re beating their tom-toms like they want it, but they don’t. They have the most to be concerned about because for some of their members to say that we shouldn’t go forward with this is a bad vote.”

Some Republicans, including House Minority Leader Kevin McCarthy from California, have called on Pelosi to hold the vote.

President Trump is again attacking the whistleblower’s credibility and calling the impeachment investigation a “fraud," according to a tweet he sent this morning.

The tweet is similar to the statements the President has been making over the past several days in defense of his call with Ukraine President Volodymyr Zelensky.

"The so-called Whistleblower’s account of my perfect phone call is 'way off,' not even close. Schiff and Pelosi never thought I would release the transcript of the call. Got them by surprise, they got caught. This is a fraud against the American people!" Trump tweeted.

A second whistleblower from the intelligence community with knowledge regarding President Trump's dealings with Ukraine may file a whistleblower complaint, The New York Times reported Friday night.

Throughout the Trump administration, Democrats were arguing among themselves over whether to impeach or, at minimum, start an impeachment inquiry against the President. One of the political arguments against it was that it would cause an electoral backlash⁠—that is, trying to impeach Trump would allow his consistently low approval ratings to rise.

So far, that hasn't happened. Trump, at this point, has not improved his position following the impeachment inquiry. If anything, his numbers have dipped.

Secretary of State Mike Pompeo defended the State Department missing a Friday deadline set by the House to turn over documents requested under a congressional subpoena.

“The State Department sent a letter last night to Congress which is our initial response to the document request. We’ll obviously do all the things we are required to do by law,” Pompeo said during a press conference in Athens on Saturday without elaborating on what that response said. "As for the question of the appropriateness of the investigation I think it’s very clear… there’s clearly politics involved in this."