In their opening statements, both Fiona Hill and David Holmes sought to emphasize what is at stake with the Ukraine scandal and how much it could serve to embolden Russia.

“As we sit here, Ukrainians are fighting a hot war on Ukrainian territory against Russian aggression. This week alone, since I have been here in Washington, two Ukrainian soldiers were killed and two injured by Russia-led forces in eastern Ukraine despite a declared ceasefire. I learned overnight that seven more were injured yesterday.”

Hill stated that “the unfortunate truth is that Russia was the foreign power that systematically attacked our democratic institutions in 2016” – hitting back at false claims about Ukrainian interference -- and warned that Russia is preparing to again meddle in the 2020 election.

"We are running out of time to stop them. In the course of this investigation, I would ask that you please not promote politically driven falsehoods that so clearly advance Russian interests."

House lawyers Daniel Goldman and Steve Castor will be asking the witnesses questions today on behalf of lawmakers.

Goldman is working on behalf of the Democrats while Castor will be leading the questions for Republicans lawmakers.

What we know about them: Goldman, the panel’s senior adviser for the Democrats, and Castor, the House Oversight committee’s general counsel for the Republicans, have been key figures in the inquiry, guiding witnesses through their timelines, urging them to describe in detail what they learned when and following up with short, pointed questions.

President Trump's latest talking point — "I want nothing" — comes from Trump’s Sept. 9 phone call with Gordon Sondland, when Sondland asked him what he wanted from Ukraine in exchange for lifting the freeze on US military assistance.

Trump, per Sondland, said he didn't want anything. No quid pro quo!

And it's because of that testimony that Republicans say Sondland exonerated Trump.

Except the timing here is extremely important. Trump made those comments just as Congress was being made aware of the whistleblower report.

Look at it this way:

Fiona Hill, who is delivering her opening statement in a thick northern English accent, is the third immigrant to the US to testify in the impeachment inquiry.

Marie Yovanovitch, the ousted US ambassador to Ukraine, was born in Canada to parents who fled the Soviet Union and then the Nazis.

Lt. Col. Alexander Vindman, the top Ukraine expert on the NSC, was born in the then-Soviet Union. His parents brought him the US with his twin brother when they were young.

All three entered government service — Yovanovitch in the foreign service, Vindman in the Army, and Hill in various foreign policy roles.

Another witness, Gordon Sondland, is a first-generation American. He recalled during his testimony Wednesday how his parents fled Europe during the Holocaust.

“The few immigrant stories we’ve heard in the course of these hearings are some of the most powerful I’ve ever heard,” he said.

Of the dozen impeachment witnesses who have appeared in public so far, more than half have been foreign service officers.

There’s a reason Democrats appear to value their testimony: They are poised communicators and experts in the official policies of the United States that appear to have been undermined by outside actors.

But perhaps, most importantly, they are copious note-takers by trade. David Holmes said in his opening statement he was “often called upon to take notes” in meetings with visiting officials or with the ambassador. He cited multiple episodes when he was assigned as an official note-taker in meetings.

But because they spent their careers in the foreign service, they also have note-taking in their professional blood.

This is useful because it lends credibility to their recollections in ways others have struggled. Gordon Sondland, the US ambassador to the European Union, openly acknowledged yesterday that he was not a big note-taker. The effect on his testimony was noticeable: he was undercut by Republicans as relying on conjecture and recollection rather than actual documentation.

Another person not known to appreciate note-taking: President Trump. He’s questioned why people are taking notes in meetings, including his onetime White House counsel Don McGahn, who used his notes to aid the Mueller investigation.

And he has insisted on having no note-taker in certain meetings, including with Russian President Vladimir Putin.

Fiona Hill, the White House's former top Russia expert, will give a warning about Russia and its continued efforts to interfere in the US elections, according to her prepared remarks.

"Right now, Russia’s security services and their proxies have geared up to repeat their interference in the 2020 election," she testified.

"We are running out of time to stop them," Hill said.

She will urge lawmakers to "not promote politically driven falsehoods that so clearly advance Russian interests" during the course of their impeachment inquiry.

"I respect the work that this Congress does in carrying out its constitutional responsibilities, including in this inquiry, and I am here to help you to the best of my ability," she testified. "If the President, or anyone else, impedes or subverts the national security of the United States in order to further domestic political or personal interests, that is more than worthy of your attention. But we must not let domestic politics stop us from defending ourselves against the foreign powers who truly wish us harm." 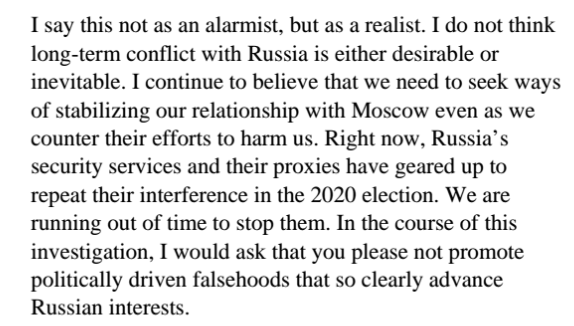 Former White House Russia expert Fiona Hill will tell the House Intelligence Committee that the idea that Ukraine meddled in the 2016 US presidential election is a "fictional narrative that has been perpetrated and propagated by the Russian security services."

Here's what she will say, according to a copy of her prepared remarks:

"Based on questions and statements I have heard, some of you on this committee appear to believe that Russia and its security services did not conduct a campaign against our country — and that perhaps, somehow, for some reason, Ukraine did," she will say.

"This is a fictional narrative that has been perpetrated and propagated by the Russian security services themselves."

US diplomat David Holmes said that after he read claims that the impeachment inquiry lacked fist-hand knowledge, he realized he "had first-hand knowledge regarding certain events on July 26."

Remember: A lack of first-hand information has been a key talking point for President Trump and other Republicans. But various witnesses who have testified in the impeachment inquiry have had firsthand knowledge of various components of the Trump administration's dealings with Ukraine.

"I also read reports noting the lack of 'first-hand' evidence in the investigation and suggesting that the only evidence being elicited at the hearings was 'hearsay,'" Holmes testified.

"I came to realize I had first-hand knowledge regarding certain events on July 26 that had not otherwise been reported, and that those events potentially bore on the question of whether the President did, in fact, have knowledge that those senior officials were using the levers of our diplomatic power to induce the new Ukrainian President to announce the opening of a criminal investigation against President Trump’s political opponent."

State Department aide David Holmes described his shock to learn that there was a "demand" for Ukrainian President Volodymyr Zelensky to announce an investigation into his political rival during a televised interview.

Holmes said the top diplomat in Ukraine, Bill Taylor, had been notified of the issue. He said Taylor told him, "Now they’re insisting Zelenskyy commit to the investigation in an interview with CNN."

The "they," he said, are Ambassador Gordon Sondland; Kurt Volker, the onetime US special envoy to Ukraine; and Rick Perry, the Energy secretary.

"I was shocked the requirement was so specific and concrete," he said.

Holmes continued: "While we had advised our Ukrainian counterparts to voice a commitment to following the rule of law and generally investigating credible corruption allegations, this was a demand that President Zelensky personally commit, on a cable news channel, to a specific investigation of President Trump’s political rival."