He said he listened to the call in the Situation Room with White House colleagues.

"I was concerned by the call, what I heard was inappropriate, and I reported my concerns to Mr. Eisenberg," Vindman said.

The decorated service member went on to explain why he thought the call was inappropriate.

"It is improper for the President of the United States to demand a foreign government investigate a US citizen and a political opponent. It was also clear that if Ukraine pursued an investigation into the 2016 election, the Bidens, and Burisma, it would be interpreted as a partisan play. This would undoubtedly result in Ukraine losing bipartisan support, undermine US national security, and advance Russia's strategic objectives in the region."

This post has been updated to reflect Vindman's remarks as delivered.

"I want to take a moment to recognize the courage of my colleagues who have appeared and are scheduled to appear before this Committee. I want to state that the vile character attacks on these distinguished and honorable public servants is reprehensible. It is natural to disagree and engage in spirited debate, this has been the custom of our county since the time of our Founding Fathers, but we are better than personal attacks."

Vindman didn't call out anyone specially by name. But last week, during the testimony of Marie Yovanovitch, former US Ambassador to Ukraine, President Trump live-tweeted an attack on her.

Later, when she was asked about the tweet, she said, "It's very intimidating."

In his opening statement, Rep. Devin Nunes asked, "How does the whistleblower explain the inaccuracies in the complaint?"

Facts First: The whistleblower's complaint, including its account of President Trump’s call with Ukrainian President Volodymyr Zelensky, has largely been proven to be accurate. In fact, the rough transcript released by Trump himself showed that the whistleblower's three primary allegations about the call were correct or very close to correct.

Additionally, according to a CNN analysis, the overwhelming majority of allegations in the complaint have been corroborated by official government documents, Trump’s public statements, and news reporting.

You can read a more in-depth fact check here. 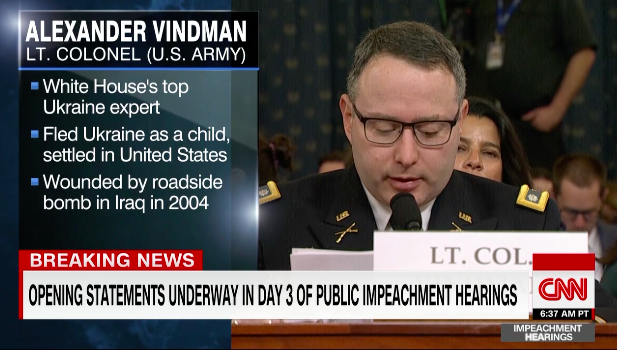 Vindman is White House's top Ukraine expert at the National Security Council. He was on the July 25 phone call.

Republican Rep. Devin Nunes claimed in his opening statement today that diplomats who testified in the impeachment inquiry last week were “unable to identify any crime or impeachable offense the President committed.”

Facts First: Two diplomats who testified last week, Bill Taylor and George Kent, declined to venture an opinion when asked whether Trump committed impeachable offenses. Taylor made clear that they were testifying to say what they knew, not to take a position for or against impeachment.

Both Taylor, the top US diplomat in Ukraine, and George Kent, Deputy Assistant Secretary of State for European and Eurasian Affairs, stayed silent for about three seconds after the “anyone?” But then Taylor said, “Mr. Ratcliffe, if I could just respond. Let me just reiterate that I’m not…”

Ratcliffe then interrupted, saying he only had a minute left for his questioning. When the committee chairman, Rep. Adam Schiff, reminded Ratcliffe that he had asked a question the witness was trying to answer, Ratcliffe said, “I’ll withdraw the question.”

Taylor answered anyway, returning to what he had said in his opening statement that he was appearing at the hearing to provide facts, not to advocate or oppose impeachment. “I’m not here to take one side or the other. That’s your decision,” he said. He continued moments later that Kent was also not present to “decide about impeachment.”

A White House official said President Trump has a busy day ahead, but may watch parts of today’s hearing.

He will also be briefed by aides later in the day, the official said.

Jennifer Williams, an aide to Mike Pence who was on the July 25 call between President Trump and Ukraine's president, says she thought the call was "unusual" since it included domestic politics.

"I found the July 25th phone call unusual because, in contrast to other presidential calls I had observed, it involved discussion of what appeared to be a domestic political matter," she said.

The pair both testified behind closed doors before appearing at today's public hearing.

Williams and Vindman have first-hand knowledge of President Trump's July 25 call with the Ukrainian president.